Temporal Variation and Statistical Assessment of the b Value off the Pacific Coast of Tokachi, Hokkaido, Japan
Previous Article in Journal

The Relevance of Foreshocks in Earthquake Triggering: A Statistical Study

On Possible Electromagnetic Precursors to a Significant Earthquake (Mw = 6.3) Occurred in Lesvos (Greece) on 12 June 2017

This paper reports an attempt to use ultra-low-frequency (ULF) magnetic field data from a space weather monitoring magnetometer array in the study of earthquake (EQ) precursors in Greece. The data from four magnetometer stations of the HellENIc GeoMagnetic Array (ENIGMA) have been analyzed in the search for possible precursors to a strong EQ that occurred south of Lesvos Island on 12 June 2017, with magnitude Mw = 6.3 and focal depth = 12 km. The analysis includes conventional statistical methods, as well as criticality analysis, using two independent methods, the natural time (NT) method and the method of critical fluctuations (MCF). In terms of conventional statistical methods, it is found that the most convincing ULF precursor was observed in the data of ULF (20–30 mHz) depression (depression of the horizontal component of the magnetic field), which is indicative of lower ionospheric perturbation just 1 day before the EQ. Additionally, there are indications of a precursor in the direct ULF emission from the lithosphere 4 days to 1 day before the EQ. Further study in terms of NT analysis identifies criticality characteristics from 8 to 2 days before the EQ both for lithospheric ULF emission and ULF depression, while MCF reveals indications of criticality in all recorded magnetic field components, extending from 10 to 3 days before the EQ. Beyond the recordings of the geomagnetic stations of ENIGMA, the recordings of the fracto-electromagnetic emission stations of the HELlenic Seismo-ElectroMagnetics Network (ELSEM-Net) in Greece have been analyzed. The MHz recordings at the station that is located on Lesvos Island presented criticality characteristics (by means of both NT analysis and MCF) 11 days before the EQ, while a few days later (7–6 days before the EQ), the kHz recordings of the same station presented tricritical behavior. It is noted that the magnetosphere was quiet for a period of two weeks before the EQ and including its occurrence. View Full-Text
Keywords: The 2017 Lesvos earthquake (EQ); ultra-low-frequency (ULF) effects; EQ precursor; lithospheric ULF emission; ULF depression; fracto-electromagnetic emissions The 2017 Lesvos earthquake (EQ); ultra-low-frequency (ULF) effects; EQ precursor; lithospheric ULF emission; ULF depression; fracto-electromagnetic emissions
►▼ Show Figures 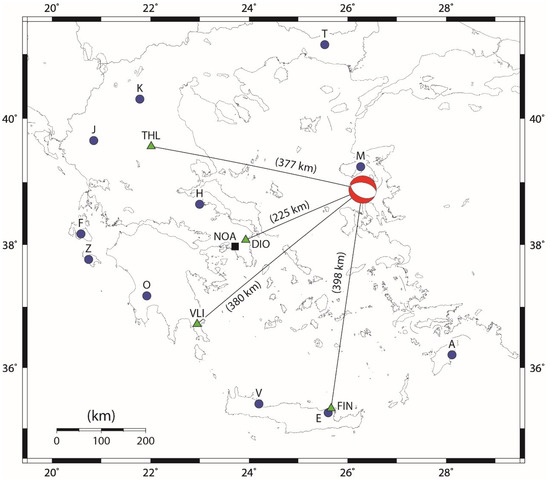