A Caputo–Fabrizio Fractional-Order Model of HIV/AIDS with a Treatment Compartment: Sensitivity Analysis and Optimal Control Strategies

Chiu [18,19] applied the stochastic entropy equation to calculate mean velocity and suggested Equation (1), as follows, where is the velocity, is the maximum velocity, (0 ≤≤ 1) is the spatial coordinates when the velocity is , is the minimum values of occurring at the channel boundary layer (), is the maximum values of occurring at the , is the entropy parameter (see Figure 1).
The mean velocity equation (Equation (3)) using K(M) and water level is proposed and used, as shown in Equation (2). here, is where is the mean velocity, is water level for , is the minimum water level, is the maximum water level.
In fluid dynamics, the Darcy–Weisbach equation is used for estimating friction coefficient which is shown in Equation (4). where is water head loss, is friction loss coefficient, is pipe diameter, is velocity, is gravitational acceleration.
The friction coefficient was estimated by using the equation regarding the frictional velocity, as shown in Equation (5). where, is the shear velocity.

2.2. Estimation of the Friction Head Loss

In this part, an equation for calculating the friction head loss using Chiu’s velocity distribution equation and friction head loss equations is purposed.
If Equation (3) is differentiated with respect to the velocity gradient, and and are applied, the equation is represented as: where is the hydraulic radius.
As for the velocity (u is zero at the boundary layer), Equation (6) can be modified as Equation (7).
Equation (7) can be represented with shear stress equation (Equation (8)), as follows: where is the bottom shear stress, is the density of the fluid, is the kinematic viscosity:
Additionally, Equation (9) can be represented with shear velocity equation (Equation (10)), as follows:
The friction coefficient equation can be determined by submitting Equation (5) into Equation (12) following as Equation (13).
The proposed friction coefficient equation is as follows:
F(M) is defined as Equation (15).

In this paper, the pipe friction coefficient was proposed. The proposed equation was verified using Nikuradse’s experimental data [20]. The data were classified into two types (smooth pipe and rough pipe) and each were determined with diameter and relative roughness. Then, observed data and estimated (proposed equation) data were analyzed.

The measured data are classified into five diameters of 1, 2, 3, 5, and 10 listed in Table 1, which experimental data are 125 cases in total. In the data, pipe diameter (), hydraulic radius (), shear velocity (), average velocity (, maximum flow rate, kinematic viscosity (), Reynolds number (), and friction coefficient () are included in Table 1.
The friction coefficient results determined from the developed equation with the data measured by Nikuradse from the smooth pipes experiments were compared. Then, entropy M values were determined for 125 cases, considering the flow rate and diameter of the smooth pipe. From these entropy M, F(M) was calculated by using Equation (14). Then, the friction coefficient was estimated from Equation (15).
The estimated friction coefficients were compared with the measured data from Nikuradse’s experiments as shown in Figure 2. In Table 1, the measured friction coefficients show decrease in inverse, proportion to the diameter of the pipe. Meanwhile, the shear velocity, the average velocity, F(M) and Reynolds number rapidly increased as the diameter increased.
According to Table 1, the Reynolds numbers had quite a wide range from a minimum of 3.07 to a maximum of 3230. For the visibility of the graph, we used the logarithm scale of the axis in Figure 2. Figure 2 shows that the developed equation well represented the Nikuradse’s friction coefficients, showing very high accuracy, in which the R2 values was 0.9977.

The RMSE is a measure of the residual, which is the difference between the values predicted by the model and actual observed values. The RMSE enables predictive power to be integrated into a single unit of measurement. The RMSE of the model’s prediction for the estimated variable is defined as the square root of the mean square error Equation (16). where indicates the actual observed value, and is the predicted value obtained from the model.

The determined friction coefficients of the pipe were compared with those measured by Nikuradse, as shown Figure 4, Figure 5, Figure 6, Figure 7, Figure 8, Figure 9 and Figure 10. Each determined RMSE values were very low from 0.000366 to 0.000436 as shown in Table 3.
The more quantitative validation, this study used discrepancy ratio method which method is a statistical analysis method for calculating ratio between measured and determined coefficients Equation (17).
Each calculated constraint is sorted in ascending order and then expressed as a percentage of certain divided section. If the value is greater than 0, it means over-determination, and if it is less than 0, it means under-determination.
Determined friction coefficients were compared with Nikuradse’s results, as shown in Figure 11 and Figure 12. These figures show that the discrepancy ratio results of the proposed equation were all distributed near 0. In the case of the smooth pipe, it was found to be very close to 0 in the range of 0.055 to −0.029 as shown in Figure 11. In the case of the rough pipe, it is distributed in the range of −0.011 to −0.003 and tends to be underestimated, but the overall distribution is very close to zero as shown in Figure 12.

This study proposed a new equation using the entropy-based mean velocity equation for estimating the pipe friction coefficient, which is a very important factor for the determination of pipe friction loss. The proposed equation used the F(M) factor derived by combining Darcy–Weisbach’s formula for friction head loss, shear velocity equation and Chiu’s average velocity equation. Additionally, the proposed equation can be simply and easily calculated using only the pipe specifications, entropy values and average velocity without knowing the friction head loss and Reynolds number.
The evaluation results show that the proposed equation well represented the Nikuradse’s measured data and also the R2 value were 0.998 for smooth pipes and 0.979 to ~0.994 for rough pipes. In addition, the RMSE were determined to be 0.00036 for smooth pipes and from 0.00039 to 0.00044 for rough pipes. The discrepancy ratio had range from 0.055 to −0.029 for smooth pipes and a range from −0.011 to −0.003 in the case of rough pipes. Through these evaluation studies, the accuracy of the proposed equation was high and simple in applications. This shows that proposed equation can be applied to various pipe roughness values and laminar and turbulence flow.
In the future, it is expected that the pipe friction coefficient equation proposed in this study will enable the convenient estimation of flow rates to a greater extent than the existing equations. In addition, it will be possible to develop a new method for calculating roughness coefficients through continuous research on the proposed equation. Additionally, it will also be possible to respond to the Reynolds number through the study of the application method for F(M) used in the proposed equation.

Y.-M.C. and Y.-W.C. carried out the survey of previous studies. Y.-M.C. wrote the manuscript. Y.-W.C. conducted all simulations. Y.-M.C., S.-B.S., Y.-W.C. conceived the original idea of the proposed method. All authors have read and agreed to the published version of the manuscript.

This research was funded by Research Program to Solve Regional Convergence Issues of the National Research Foundation of Korea (NRF) funded by the Korean government (Ministry of Science and ICT(MSIT)), grant number 2020M3F8A1080153.

This research was supported by Research Program to Solve Regional Convergence Issues of the National Research Foundation of Korea (NRF) funded by the Korean government (Ministry of Science and ICT(MSIT)) (No. 2020M3F8A1080153). 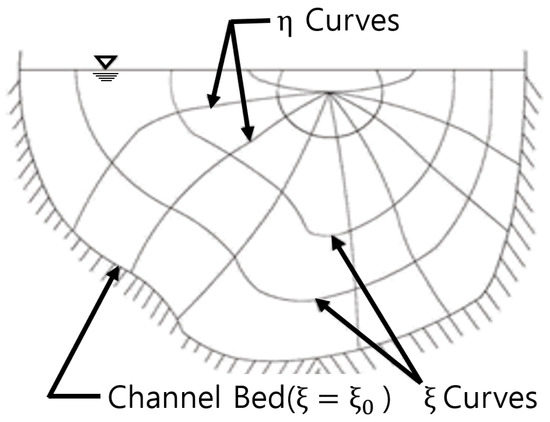 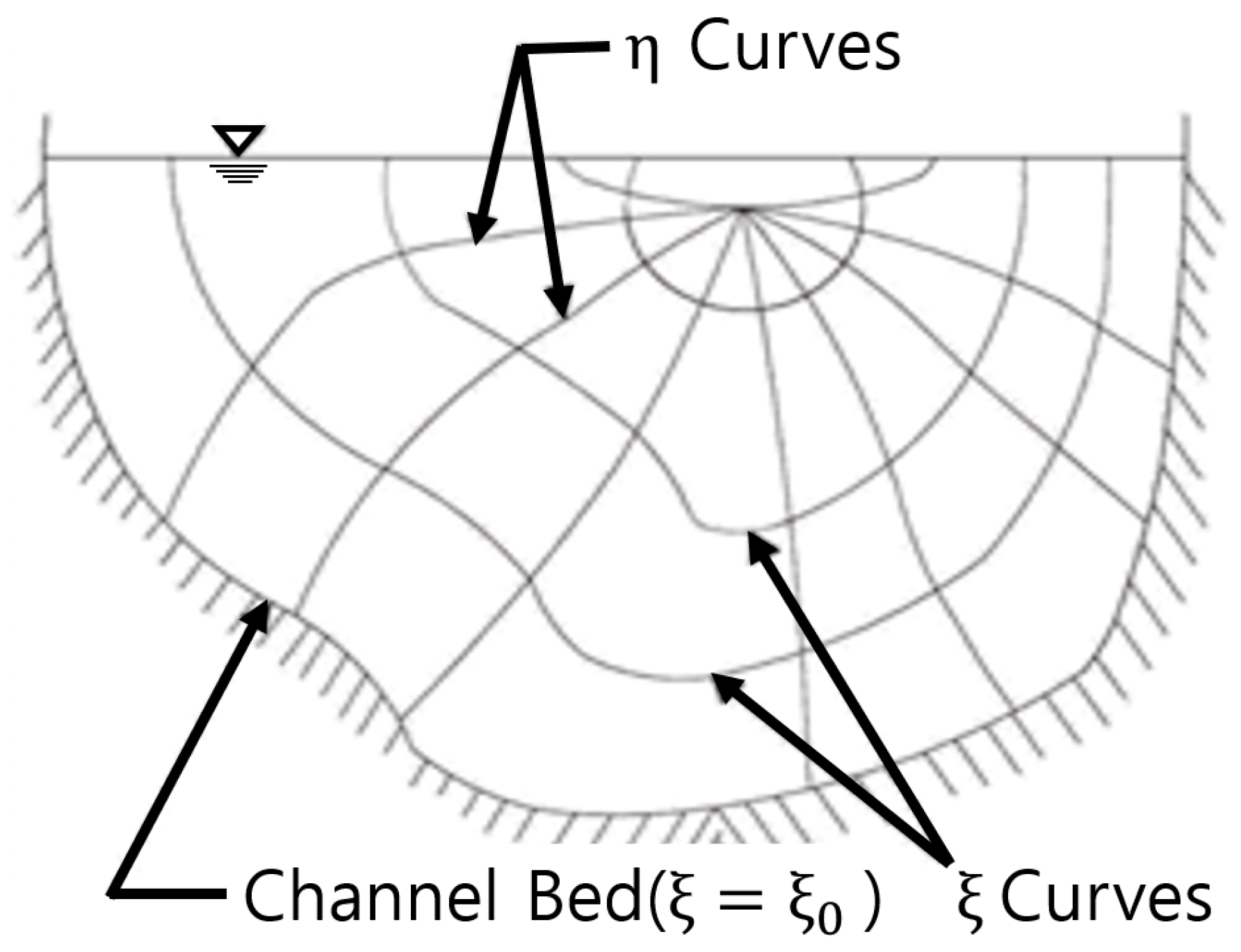 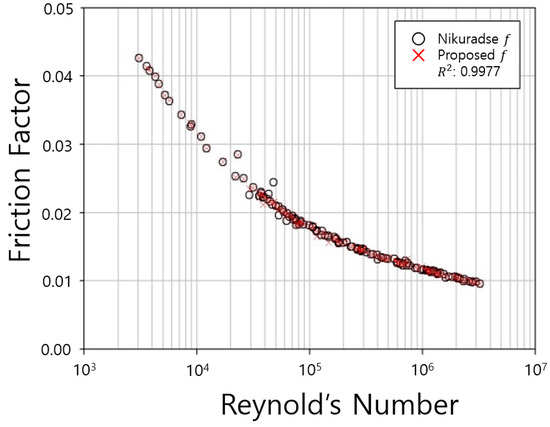 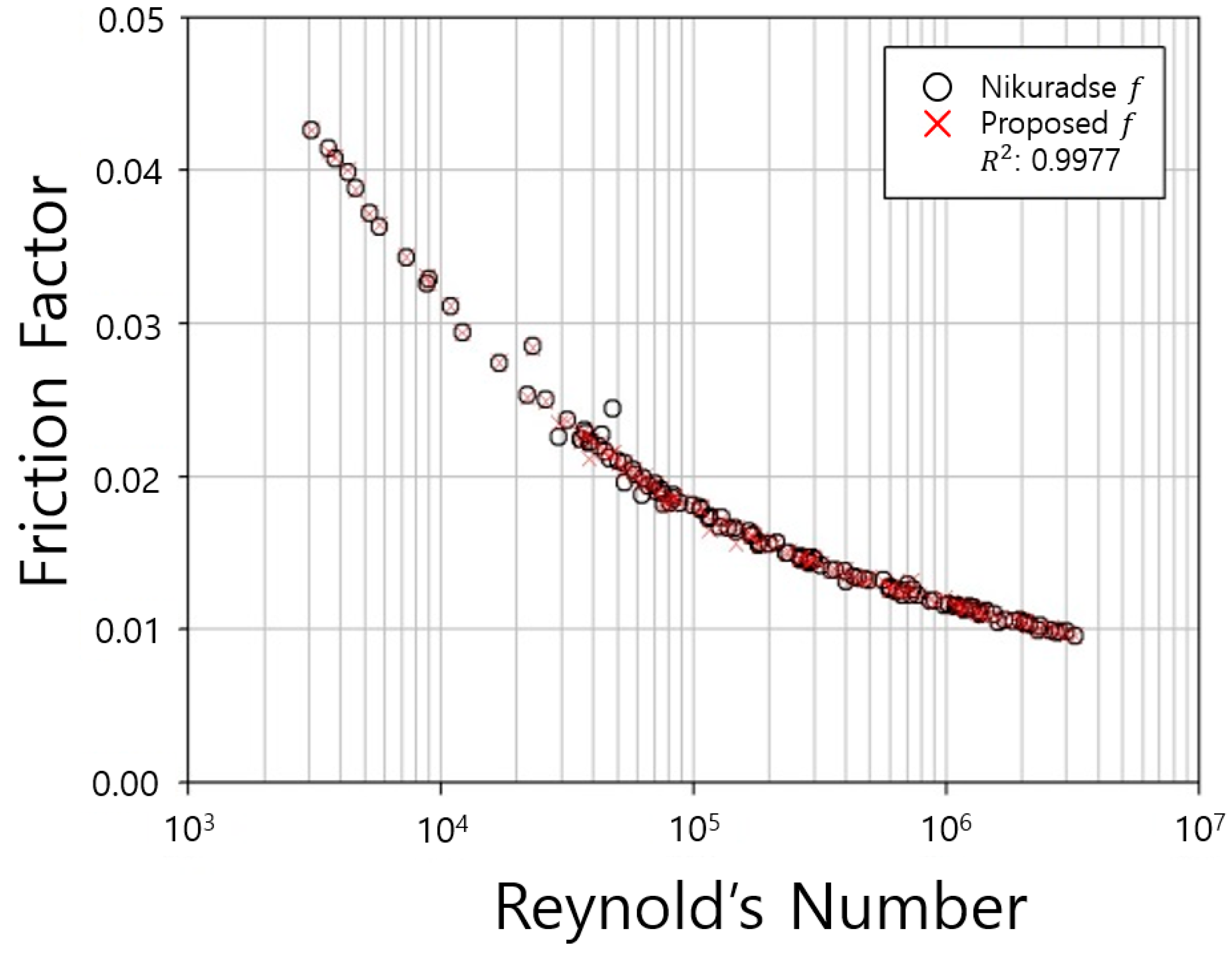 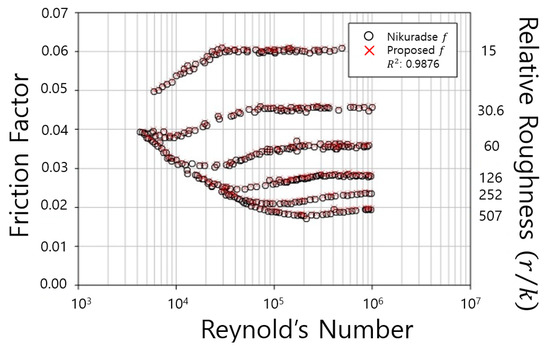 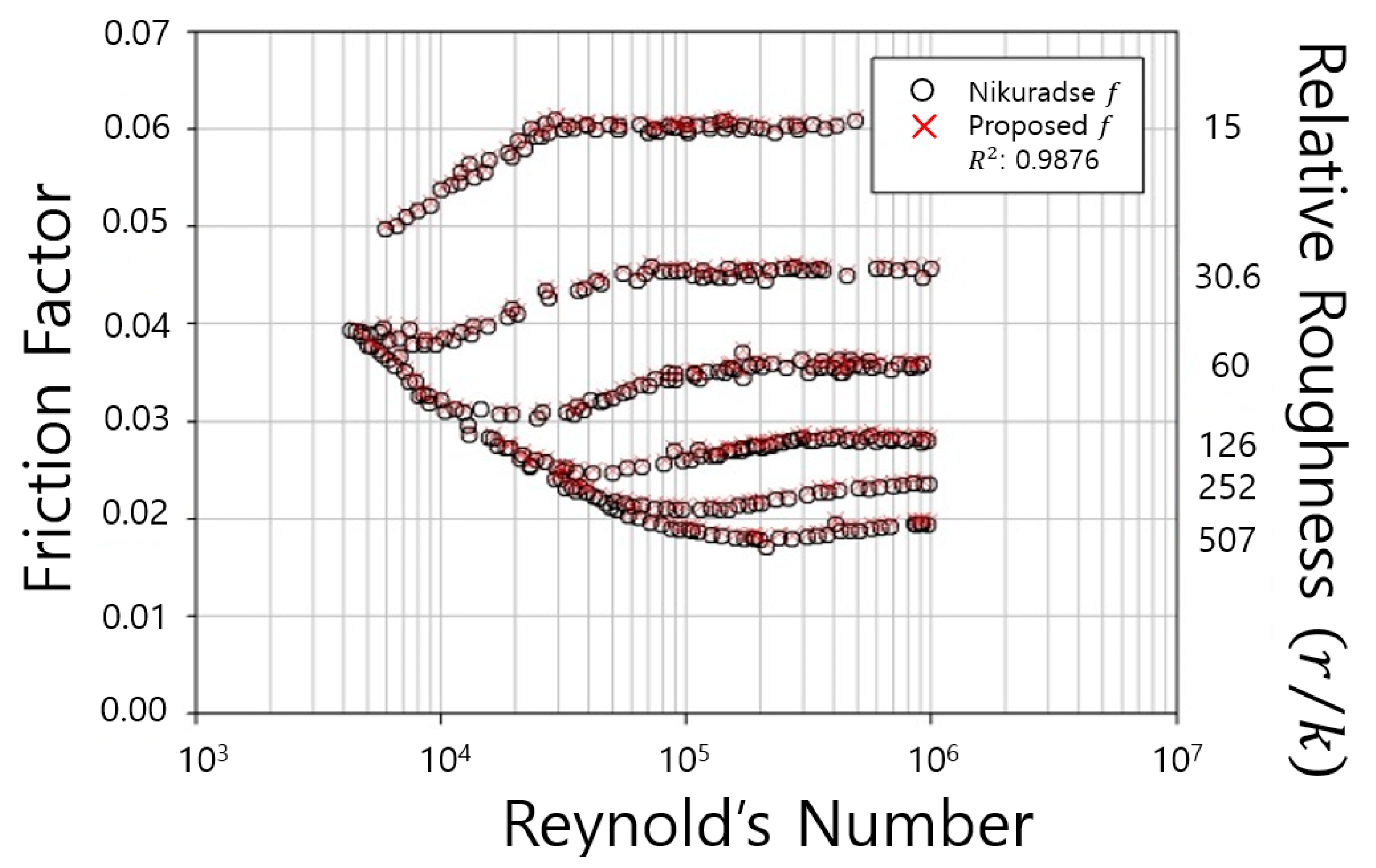 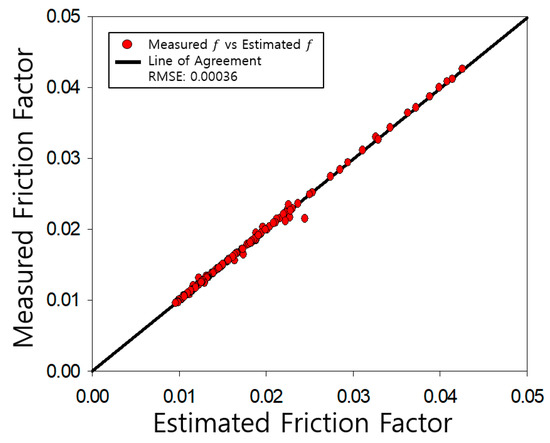 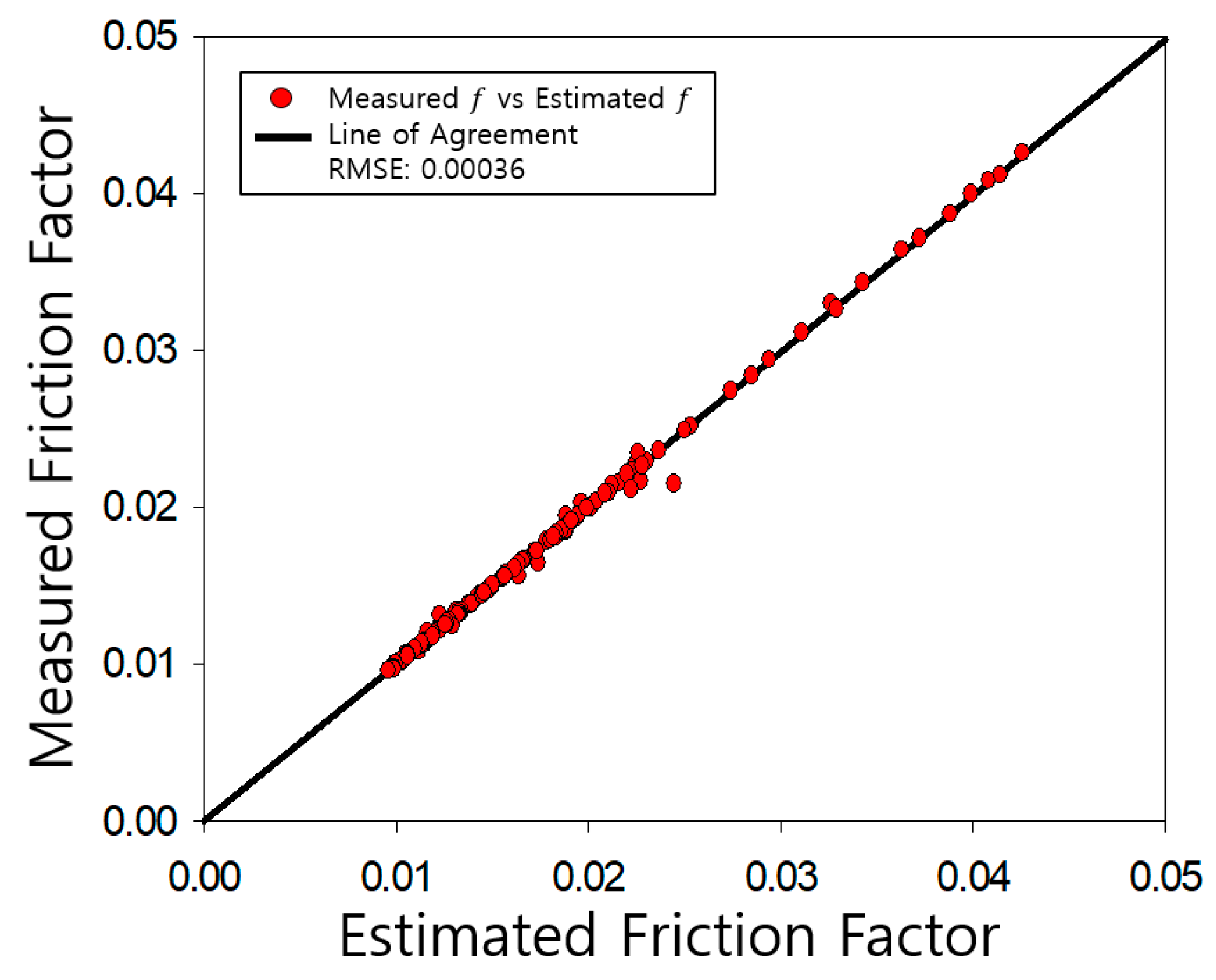 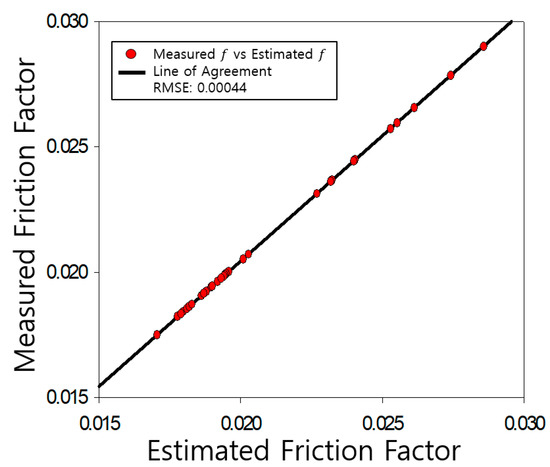 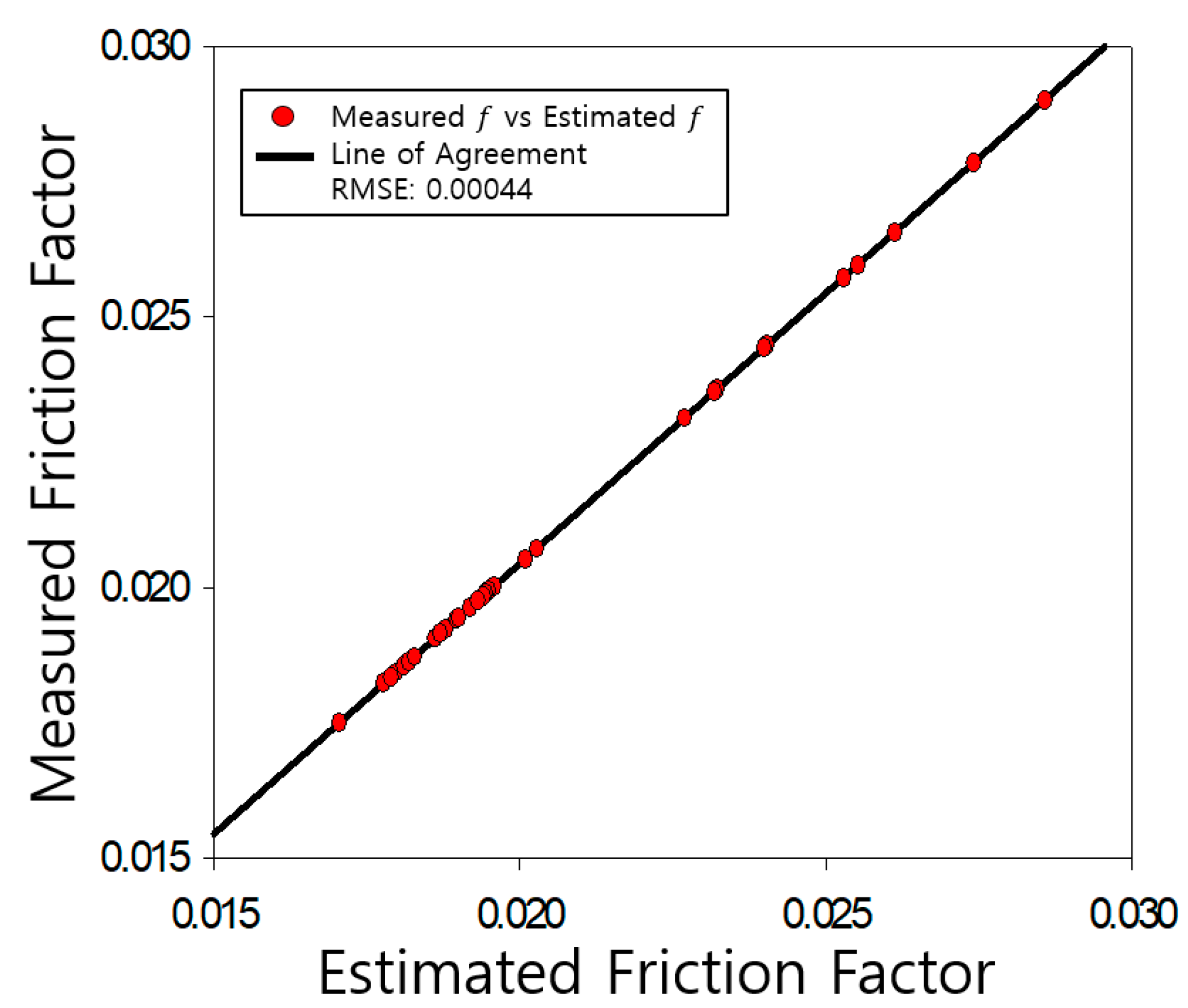 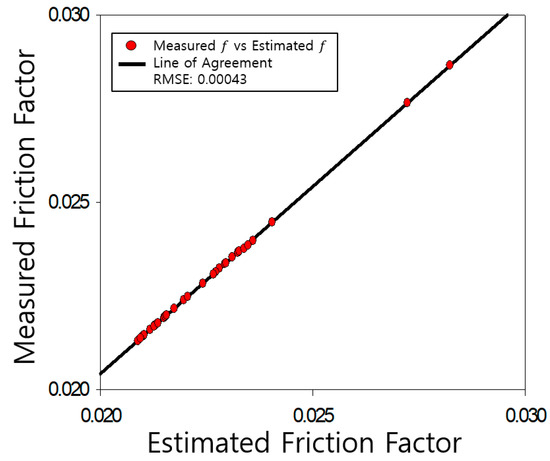 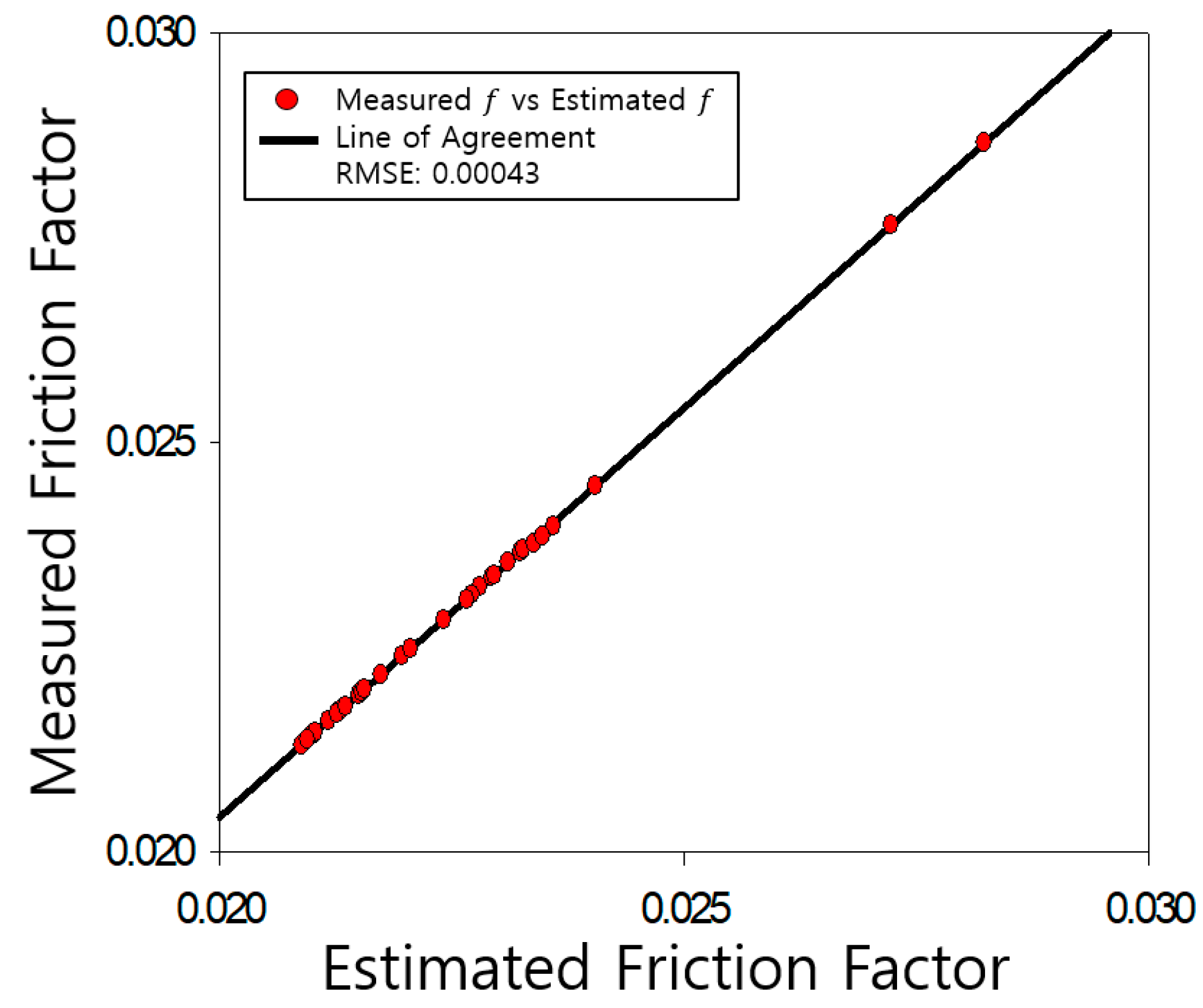 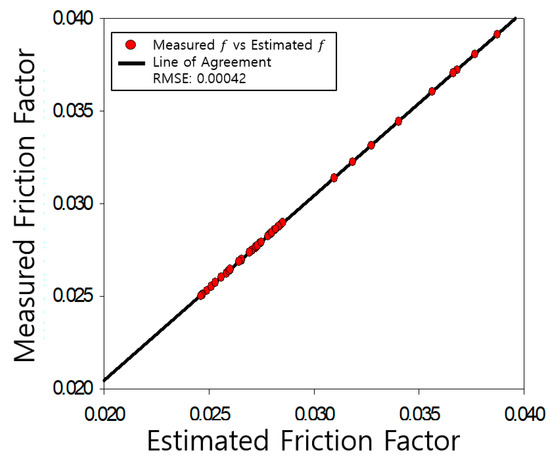 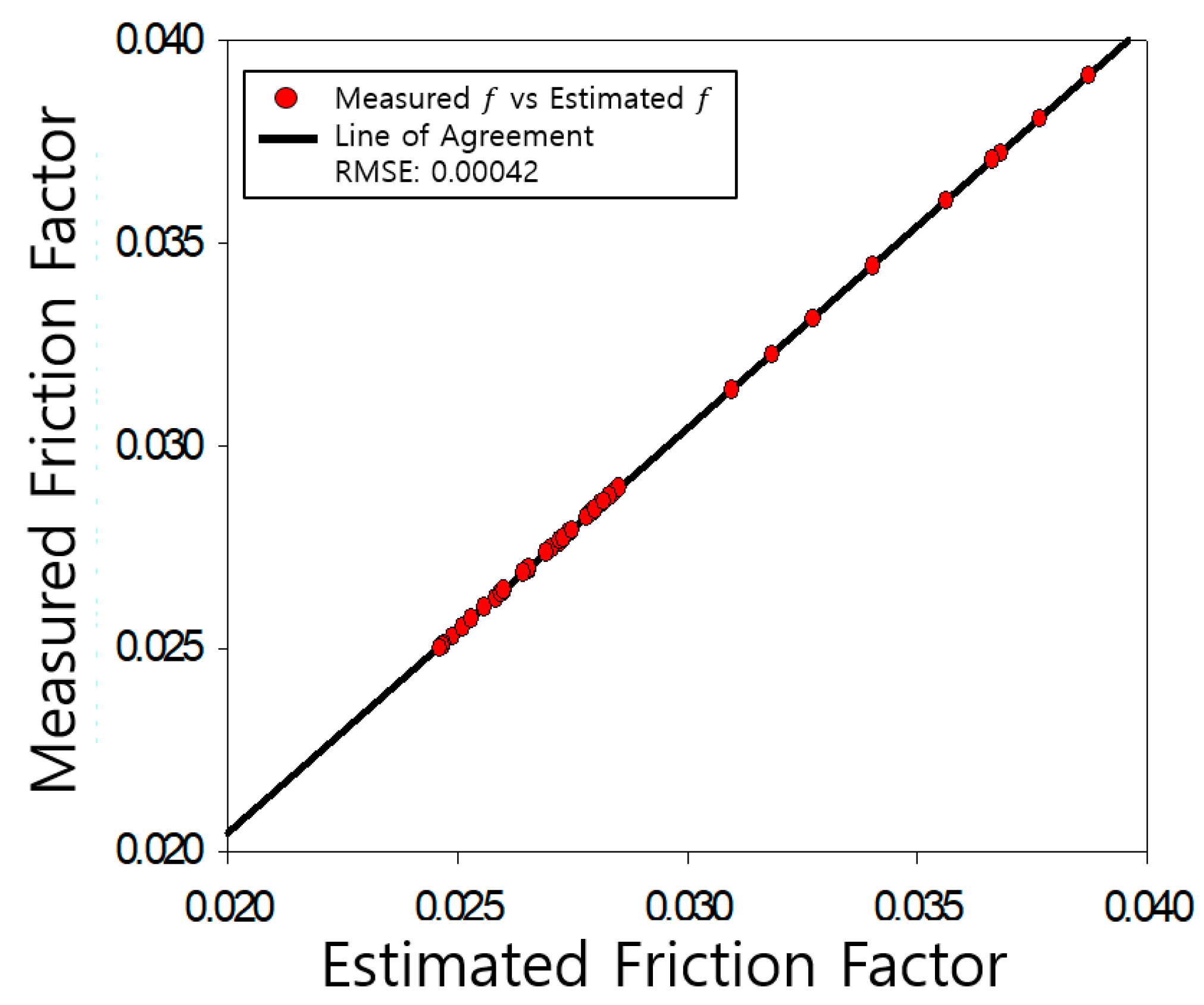 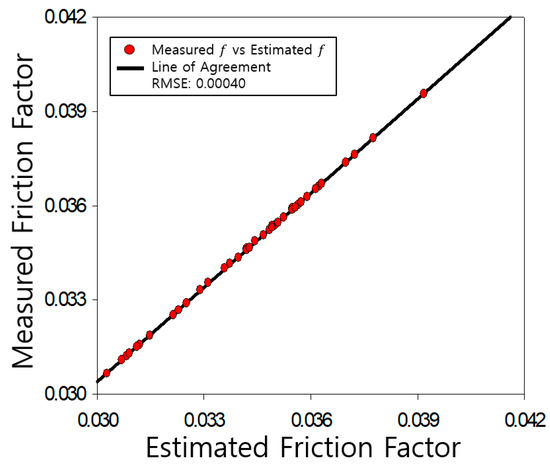 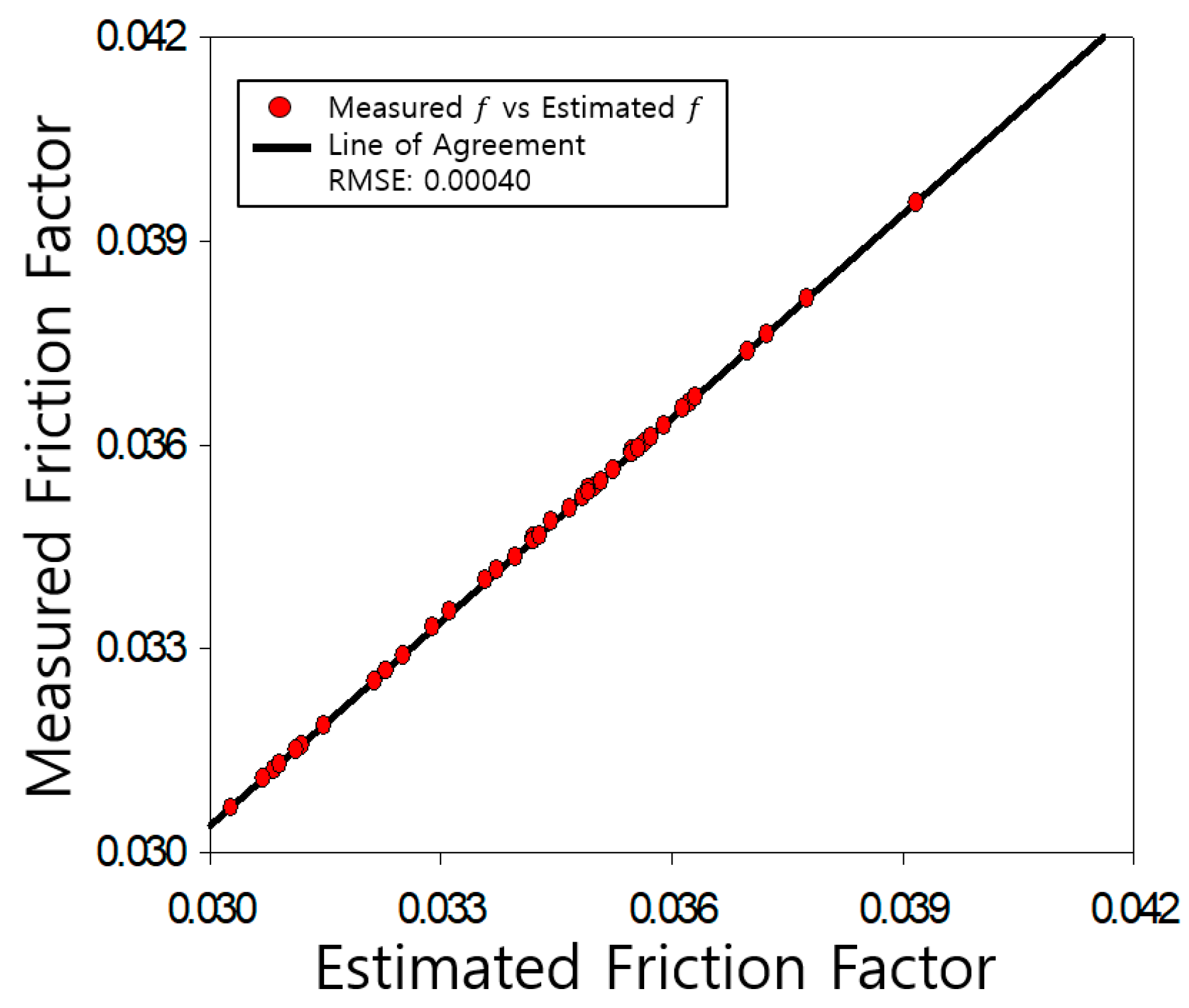 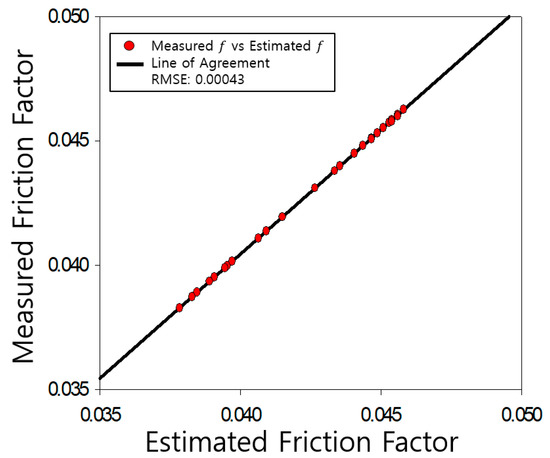 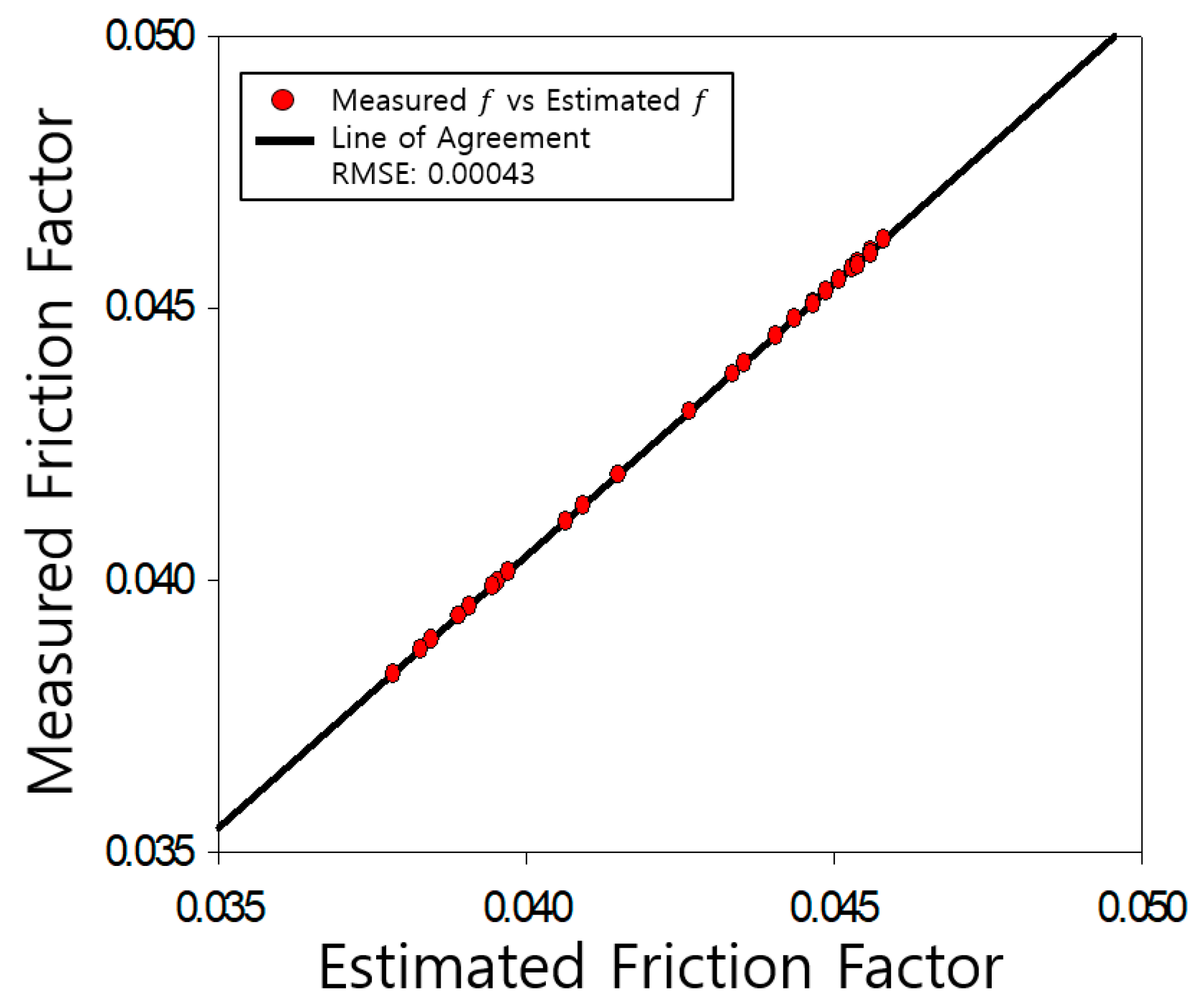 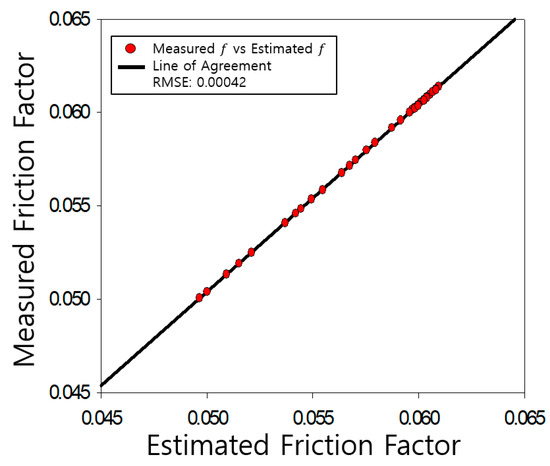 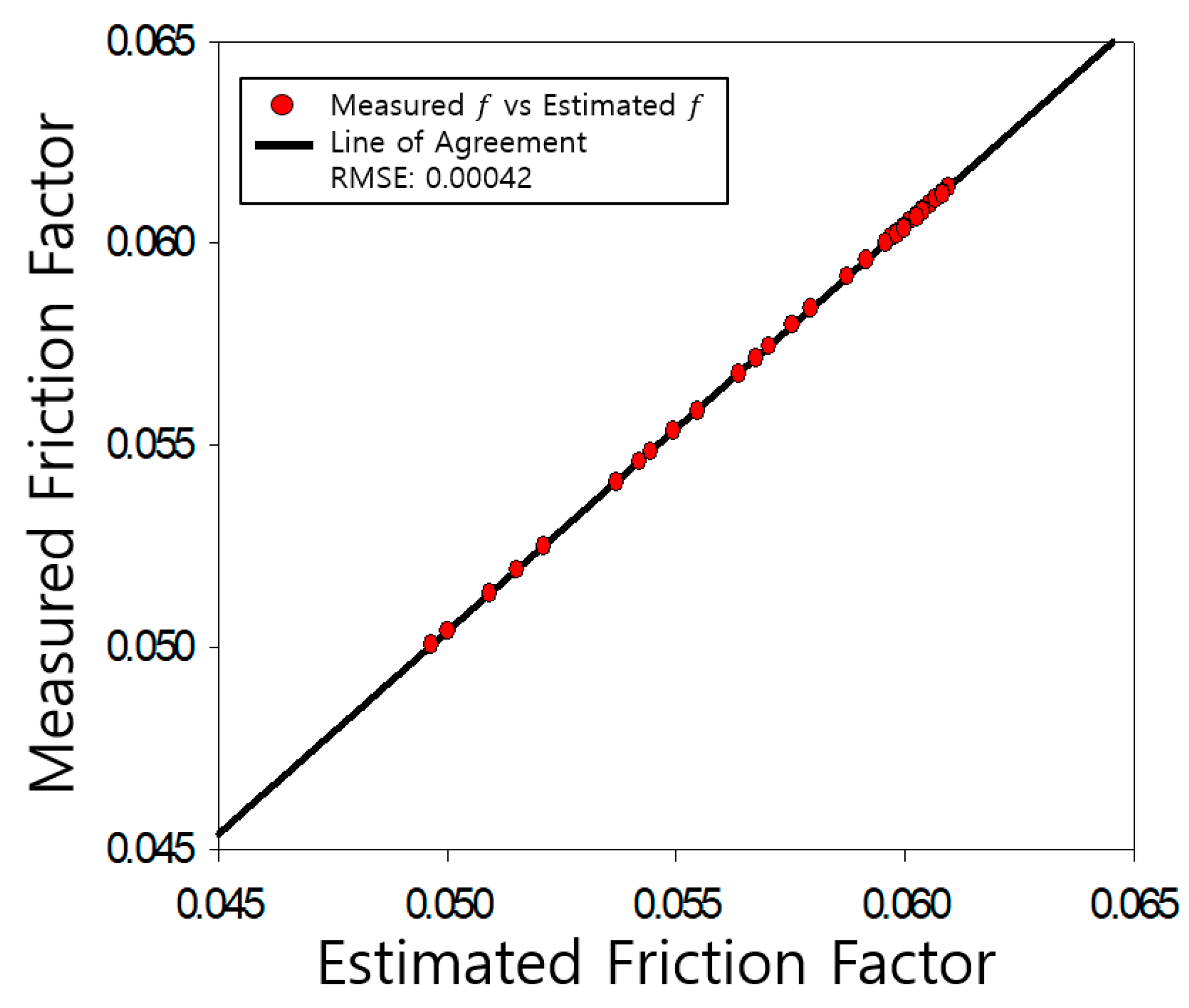 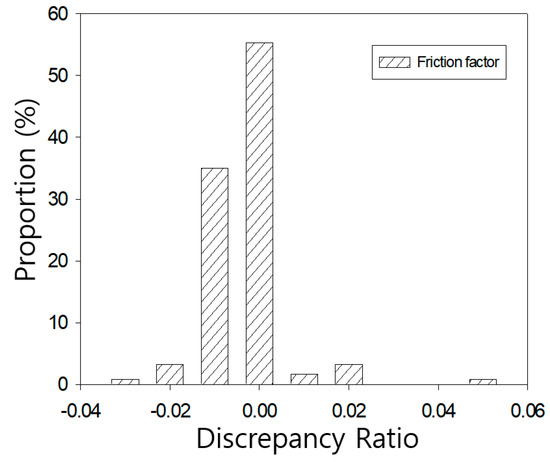 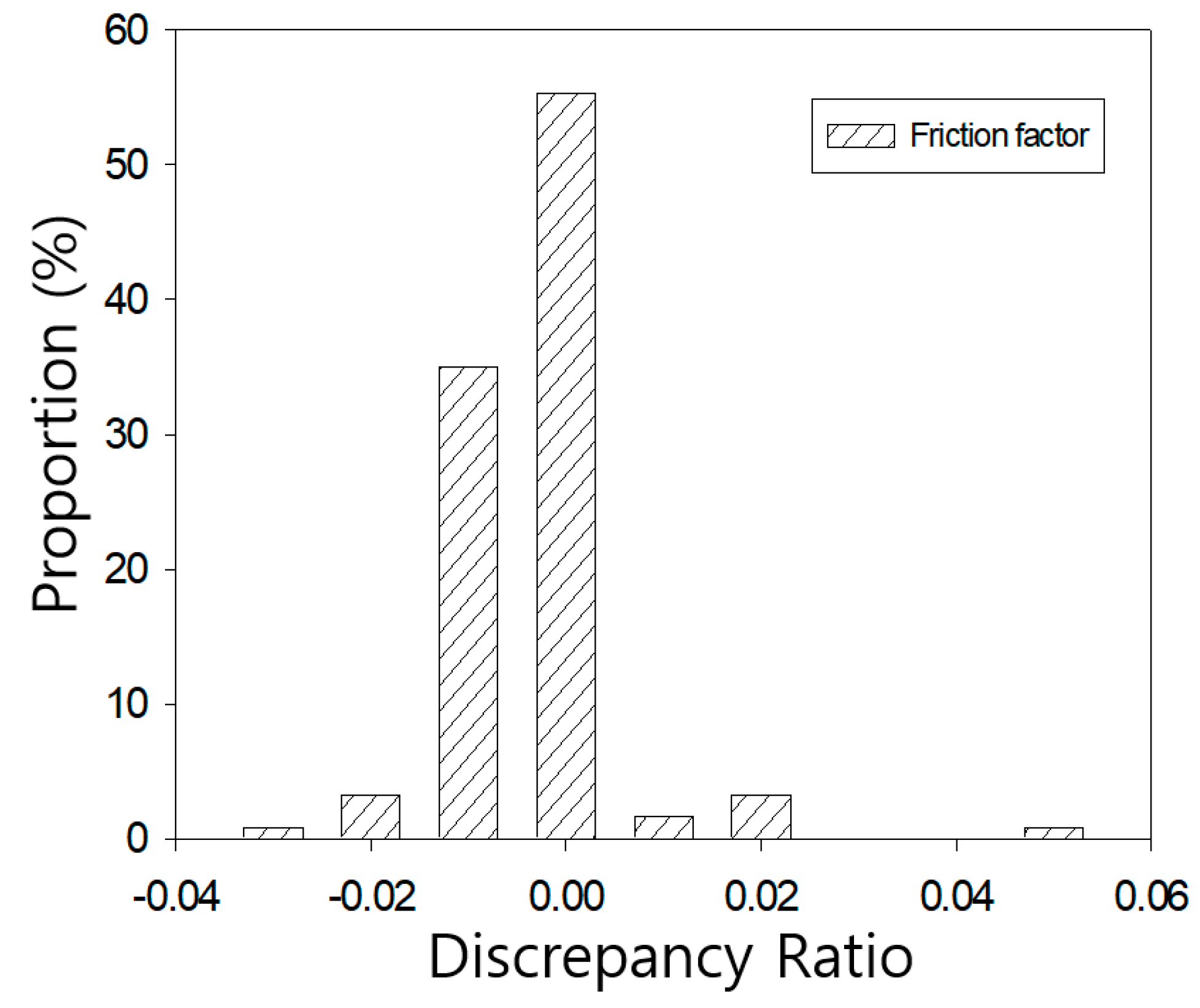 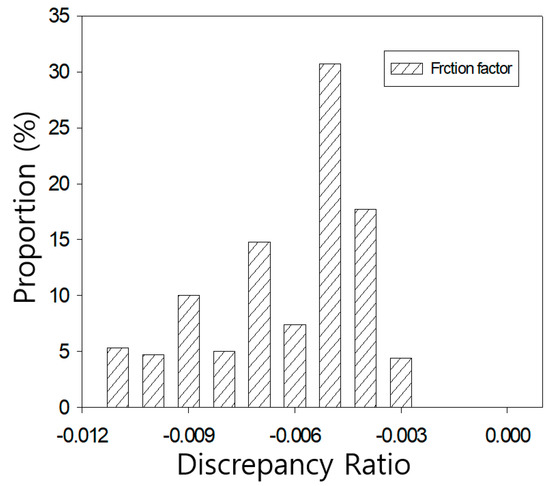 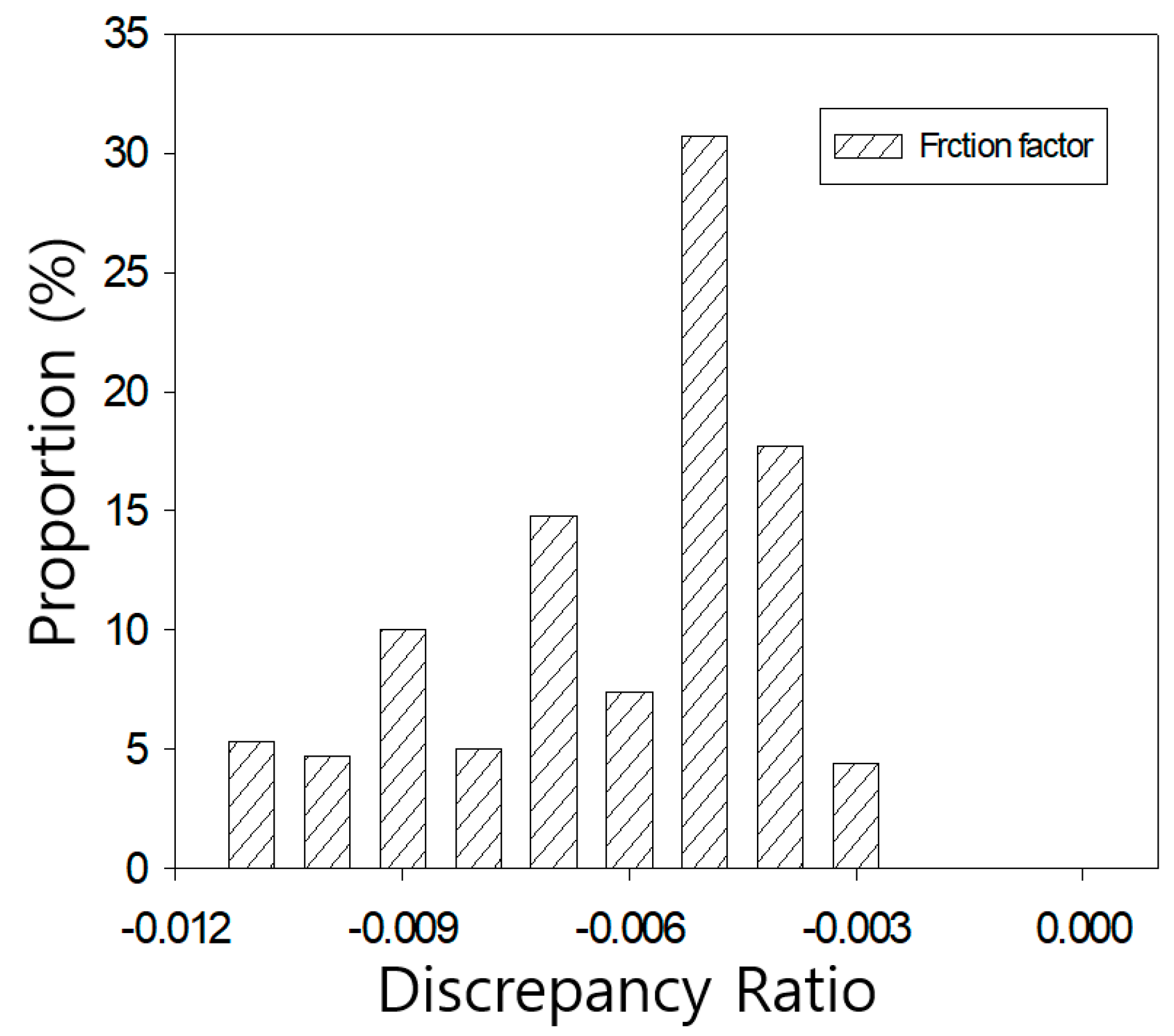 Table 3. Prediction results R2 and RMSE.
Table 3. Prediction results R2 and RMSE.
© 2021 by the authors. Licensee MDPI, Basel, Switzerland. This article is an open access article distributed under the terms and conditions of the Creative Commons Attribution (CC BY) license (https://creativecommons.org/licenses/by/4.0/).
We use cookies on our website to ensure you get the best experience. Read more about our cookies here.
Accept
We have just recently launched a new version of our website. Help us to further improve by taking part in this short 5 minute survey here. here.
Never show this again