Submit to Entropy Review for Entropy 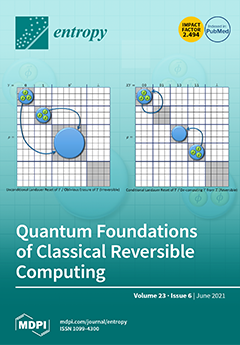 Cover Story (view full-size image): The thermodynamics of information and computation examines the requirements for a physical process that manipulates information to approach thermodynamic reversibility. A key principle, due to Landauer, tells us that a strict increase in total entropy results from the loss of correlations (i.e., mutual information) between deterministically computed subsystems when information in isolated subsystems is ejected to a thermal environment. Reversible computing refers to computation without ejection of correlated information, which can avoid the associated entropy increase. We show that the classic understanding of these topics from Landauer and Bennett is supported by the modern theory of non-equilibrium quantum thermodynamics, and we outline an approach for deriving fundamental limits of energy efficiency in reversible computing machines as a function of speed. View this paper.
Previous Issue
Volume 23, May
Next Issue
Volume 23, July
We use cookies on our website to ensure you get the best experience. Read more about our cookies here.
Accept
We have just recently launched a new version of our website. Help us to further improve by taking part in this short 5 minute survey here. here.
Never show this again