Lorenz-63 Model as a Metaphor for Transient Complexity in Climate

Substitution is an essential tool for a coach to influence the match. Factors like the injury of a player, required tactical changes, or underperformance of a player initiates substitutions. This study aims to predict the physical performance of individual players in an early phase of the match to provide additional information to the coach for his decision on substitutions. Tracking data of individual players, except for goalkeepers, from 302 elite soccer matches of the Dutch ‘Eredivisie’ 2018–2019 season were used to enable the prediction of the individual physical performance. The players’ physical performance is expressed in the variables distance covered, distance in speed category, and energy expenditure in power category. The individualized normalized variables were used to build machine learning models that predict whether players will achieve 100%, 95%, or 90% of their average physical performance in a match. The tree-based algorithms Random Forest and Decision Tree were applied to build the models. A simple Naïve Bayes algorithm was used as the baseline model to support the superiority of the tree-based algorithms. The machine learning technique Random Forest combined with the variable energy expenditure in the power category was the most precise. The combination of Random Forest and energy expenditure in the power category resulted in precision in predicting performance and underperformance after 15 min in a match, and the values were 0.91, 0.88, and 0.92 for the thresholds 100%, 95%, and 90%, respectively. To conclude, it is possible to predict the physical performance of individual players in an early phase of the match. These findings offer opportunities to support coaches in making more informed decisions on player substitutions in elite soccer. View Full-Text
Keywords: fatigue; decision-support; football fatigue; decision-support; football
►▼ Show Figures 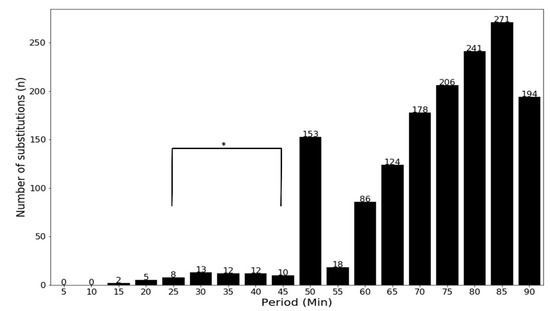