Gallic Acid Content in Taiwanese Teas at Different Degrees of Fermentation and Its Antioxidant Activity by Inhibiting PKCδ Activation: In Vitro and in Silico Studies
Previous Article in Special Issue

Nujiangexathone A, a Novel Compound Derived from Garcinia nujiangensis, Induces Caspase-Dependent Apoptosis in Cervical Cancer through the ROS/JNK Pathway

Nujiangexathone A (NJXA), a novel compound derived from Garcinia nujiangensis, has been demonstrated to inhibit the proliferation of several human cancer cell lines. This study is the first to demonstrate the apoptosis inductive activities of NJXA and the possible underlying mechanisms. Our results demonstrated that NJXA inhibited colony formation by HeLa and SiHa cells in a dose-dependent manner. An Annexin V-FITC/PI staining assay showed that NJXA strongly triggered apoptosis in a dose-dependent manner. Western blotting analyses showed that NJXA induced the caspase-dependent apoptosis of HeLa and SiHa cells by triggering a series of events, including changes in the levels of Bcl-2 family proteins, cytochrome c release, caspase-3 activation, and chromosome fragmentation. Furthermore, we demonstrated that NJXA induced cell apoptosis by activating the reactive oxygen species (ROS)-mediated JNK signaling pathway. Consistent with this finding, a ROS scavenger, N-acetyl-l-cysteine (NAC, 10 mM), hindered NJXA-induced apoptosis and attenuated the sensitivity of HeLa and SiHa cells to NJXA. In vivo results further confirmed that the tumor inhibitory effect of NJXA was partially through the induction of apoptosis. Taken together, our results demonstrated that NJXA induced the apoptosis of HeLa and SiHa cells through the ROS/JNK signaling pathway, indicating that NJXA could be important candidate for the clinical treatment of cervical cancer. View Full-Text
Keywords: Nujiangexathone A; ROS; JNK; apoptosis; cervical cancer Nujiangexathone A; ROS; JNK; apoptosis; cervical cancer
►▼ Show Figures 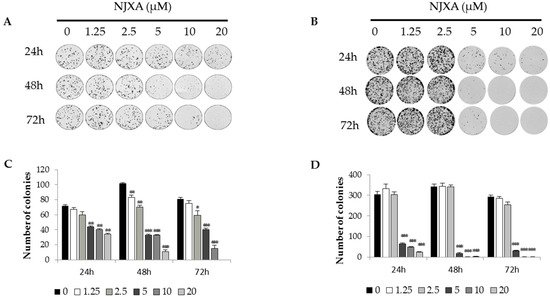