The chemopreventive properties of the herbal teas rooibos (Aspalathus linearis) and honeybush (Cyclopia spp.) have been demonstrated on mouse skin in vivo but the underlying mechanisms are not clear. The aim of the current study was to determine the anti-proliferative and pro-apoptotic activity of methanol and aqueous extracts of rooibos and two Cyclopia species in different skin cells, using green tea (Camellia sinensis) as a benchmark. Extracts were also characterised for their major individual polyphenols by high performance liquid chromatography and spectroscopically for the total polyphenol (TP) groups. The methanol extract of rooibos, containing higher levels of polyphenols than its aqueous extract, displayed similar activity to green tea as it selectively targeted premalignant cells by inhibiting cell proliferation at lower concentrations whilst inducing apoptosis via membrane depolarisation at higher concentrations. Specific roles of the major rooibos dihydrochalcones and flavanol/proanthocyanidin-type (FLAVA) compounds are likely to be involved. The aqueous extracts of the Cyclopia species were more active against cell proliferation and at inducing apoptosis which was associated with a higher FLAVA content and a reduced TP/FLAVA ratio. In contrast, their methanol extracts exhibited a cytoprotective effect against apoptosis which was related to their monomeric xanthone and flavanone content. The underlying chemopreventive properties of green tea and the herbal teas appear to be associated with diverse and complex monomeric/polymeric polyphenolic cell interactions. View Full-Text
Keywords: anti proliferative; pro-apoptotic; flavanols; herbal teas; skin cancer anti proliferative; pro-apoptotic; flavanols; herbal teas; skin cancer
►▼ Show Figures 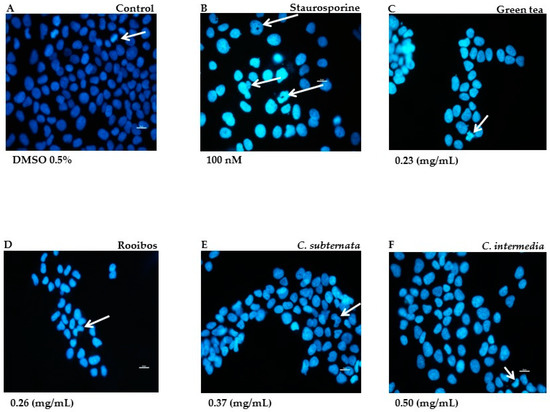