Synthesis of Thiazolo[5,4-f]quinazolin-9(8H)-ones as Multi-Target Directed Ligands of Ser/Thr Kinases

A new general protocol for synthesis of fused 1,2,3-dithiazoles by the reaction of cyclic oximes with S2Cl2 and pyridine in acetonitrile has been developed. The target 1,2,3-dithiazoles fused with various carbocycles, such as indene, naphthalenone, cyclohexadienone, cyclopentadiene, and benzoannulene, were selectively obtained in low to high yields. In most cases, the hetero ring-closure was accompanied by chlorination of the carbocyclic moieties. With naphthalenone derivatives, a novel dithiazole rearrangement (15→13) featuring unexpected movement of the dithiazole ring from α- to β-position, with respect to keto group, was discovered. Molecular structure of 4-chloro-5H-naphtho[1,2-d][1,2,3]dithiazol-5-one 13 was confirmed by single-crystal X-ray diffraction. Electrochemical properties of 13 were studied by cyclic voltammetry and a complex behavior was observed, most likely including hydrodechlorination at a low potential. View Full-Text
Keywords: fused 1,2,3-dithiazoles; synthesis; sulfur monochloride; X-ray diffraction; cyclic voltammetry fused 1,2,3-dithiazoles; synthesis; sulfur monochloride; X-ray diffraction; cyclic voltammetry
►▼ Show Figures 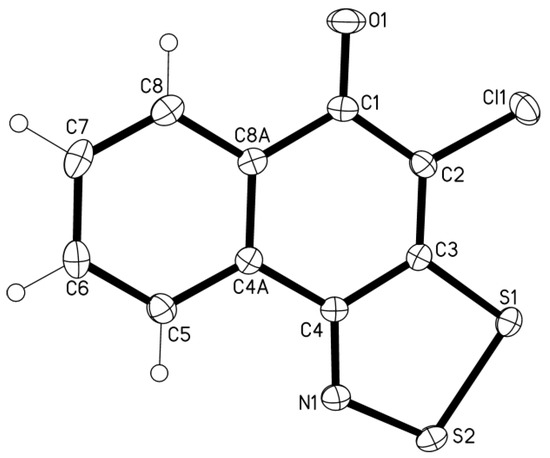