Towards a Rational Design of a Continuous-Flow Method for the Acetalization of Crude Glycerol: Scope and Limitations of Commercial Amberlyst 36 and AlF3·3H2O as Model Catalysts
Next Article in Special Issue

The nasal route receives a great deal of attention as a non-invasive method for the systemic administration of drugs. For nasal delivery, specific formulations containing excipients are used. Because of the sensitive respiratory mucosa, not only the active ingredients, but also additives need to be tested in appropriate models for toxicity. The aim of the study was to measure the cytotoxicity of six pharmaceutical excipients, which could help to reach larger residence time, better permeability, and increased solubility dissolution rate. The following excipients were investigated on RPMI 2650 human nasal septum tumor epithelial cells: β-d-mannitol, sodium hyaluronate, α and β-cyclodextrin, polyvinyl alcohol and methylcellulose. 3-(4,5-dimethyltiazol-2-yl)-2,5-diphenyltetrazolium bromide (MTT) dye conversion assay and real-time impedance analysis were used to investigate cytotoxicity. No excipient showed toxicity at 0.3% (w/v) concentration or below while 1% concentration a significantly reduced metabolic activity was measured by MTT assay for methylcellulose and cyclodextrins. Using impedance measurements, only β-cyclodextrin (1%) was toxic to cells. Mannitol at 1% concentration had a barrier opening effect on epithelial cells, but caused no cellular damage. Based on the results, all additives at 0.3%, sodium hyaluronate and polyvinyl alcohol at 1% concentrations can be safely used for nasal formulations. View Full-Text
Keywords: nasal; cytotoxicity; nasal formulation; MTT dye assay; real-time impedance analysis nasal; cytotoxicity; nasal formulation; MTT dye assay; real-time impedance analysis
►▼ Show Figures 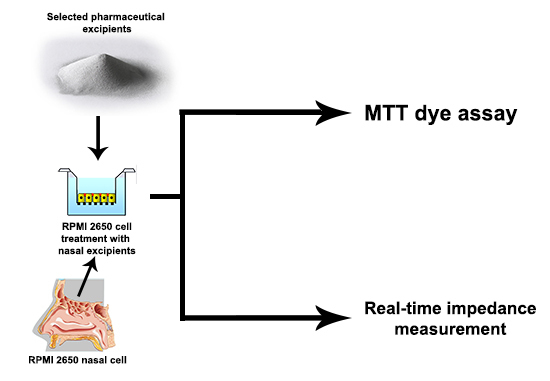