Synthesis and Properties of MQ Copolymers: Current State of Knowledge
Next Article in Special Issue

Cadmium is a well-known elicitor of melatonin synthesis in plants, including rice. However, the mechanisms by which cadmium induces melatonin induction remain elusive. To investigate whether cadmium influences physical integrities in subcellular organelles, we treated tobacco leaves with either CdCl2 or AlCl3 and monitored the structures of subcellular organelles—such as chloroplasts, mitochondria, and the endoplasmic reticulum (ER)—using confocal microscopic analysis. Unlike AlCl3 treatment, CdCl2 (0.5 mM) treatment significantly disrupted chloroplasts, mitochondria, and ER. In theory, the disruption of chloroplasts enabled chloroplast-expressed serotonin N-acetyltransferase (SNAT) to encounter serotonin in the cytoplasm, leading to the synthesis of N-acetylserotonin followed by melatonin synthesis. In fact, the disruption of chloroplasts by cadmium, not by aluminum, gave rise to a huge induction of melatonin in rice leaves, which suggests that cadmium-treated chloroplast disruption plays an important role in inducing melatonin in plants by removing physical barriers, such as chloroplast double membranes, allowing SNAT to gain access to the serotonin substrate enriched in the cytoplasm. View Full-Text
Keywords: aluminum; cadmium; chloroplasts; rice; tobacco aluminum; cadmium; chloroplasts; rice; tobacco
►▼ Show Figures 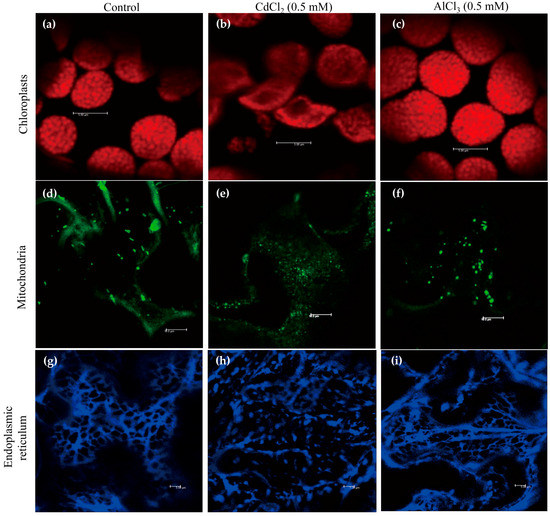