Structural Analysis and Immuno-Stimulating Activity of an Acidic Polysaccharide from the Stems of Dendrobium nobile Lindl.
Previous Article in Journal

Bullacta exarata has been consumed in Asia, not only as a part of the normal diet, but also as a traditional Chinese medicine with liver- and kidney-benefitting functions. Several scientific investigations involving extraction of biomolecules from this mollusk and pharmacological studies on their biological activities have been carried out. However, little is known regarding the antitumor properties of polysaccharides from B. exarata, hence the polysaccharides from B. exarata have been investigated here. One polysaccharide conjugate BEPS-IA was isolated and purified from B. exarata. It mainly consisted of mannose and glucose in a molar ratio of 1:2, with an average molecular weight of 127 kDa. Thirteen general amino acids were identified to be components of the protein-bound polysaccharide. Methylation and NMR studies revealed that BEPS-IA is a heteropolysaccharide consisting of 1,4-linked-α-d-Glc, 1,6-linked-α-d-Man, 1,3,6-linked-α-d-Man, and 1-linked-α-d-Man residue, in a molar ratio of 6:1:1:1. In order to test the antitumor activity of BEPS-IA, we investigated its effect against the growth of human hepatocellular carcinoma cells HepG2 in vitro. The result showed that BEPS-IA dose-dependently exhibited an effective HepG2 cells growth inhibition with an IC50 of 112.4 μg/mL. Flow cytometry analysis showed that BEPS-IA increased the populations of both apoptotic sub-G1 and G1 phase. The result obtained from TUNEL assay corroborated apoptosis which was shown in flow cytometry. Western blot analysis suggested that BEPS-IA induced apoptosis and growth inhibition were associated with up-regulation of p53, p21 and Bax, down-regulation of Bcl-2. These findings suggest that BEPS-IA may serve as a potential novel dietary agent for hepatocellular carcinoma. View Full-Text
Keywords: Bullacta exarata; polysaccharide; human hepatocellular carcinoma HepG2 cells; apoptosis Bullacta exarata; polysaccharide; human hepatocellular carcinoma HepG2 cells; apoptosis
►▼ Show Figures 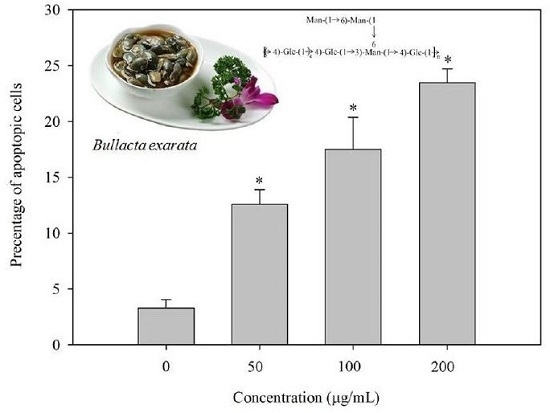