Sex-Related Differences of the Effect of Lipoproteins and Apolipoproteins on 10-Year Cardiovascular Disease Risk; Insights from the ATTICA Study (2002–2012)
Previous Article in Journal

Chicken feathers are predominantly composed of keratin; hence, valorizing the wastes becomes an imperative. In view of this, we isolated keratinase-producing bacteria and identified them through the 16S rDNA sequence. The process condition for keratinase activity was optimized, and electron micrography of the degradation timelines was determined. Keratinolytic bacteria were isolated and identified as Bacillus sp. FPF-1, Chryseobacterium sp. FPF-8, Brevibacillus sp. Nnolim-K2, Brevibacillus sp. FPF-12 and Brevibacillus sp. FSS-1; and their respective nucleotide sequences were deposited in GenBank, with the accession numbers MG214993, MG214994, MG214995, MG214996 and MG214999. The degree of feather degradation and keratinase concentration among the isolates ranged from 62.5 ± 2.12 to 86.0 ± 1.41(%) and 214.55 ± 5.14 to 440.01 ± 20.57 (U/mL), respectively. In the same vein, 0.1% (w/v) xylose, 0.5% (w/v) chicken feather, an initial fermentation pH of 5.0, fermentation temperature of 25 °C and an agitation speed of 150 rpm, respectively, served as the optimal physicochemical conditions for keratinase activity by Bacillus sp. FPF-1. The time course showed that Bacillus sp. FPF-1 yielded a keratinase concentration of 1698.18 ± 53.99(U/mL) at 120 h. The electron microscopic imaging showed completely structural dismemberment of intact chicken feather. Bacillus sp. FPF-1 holds great potential in the valorization of recalcitrant keratinous biomass from the agro sector into useful products. View Full-Text
Keywords: biodegradation; chicken feathers; keratinase; valorization biodegradation; chicken feathers; keratinase; valorization
►▼ Show Figures 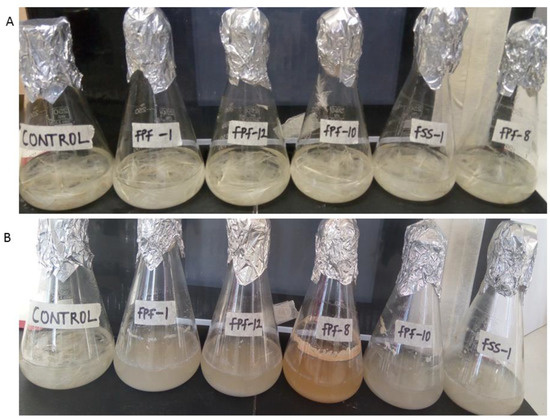