Submit to Molecules Review for Molecules 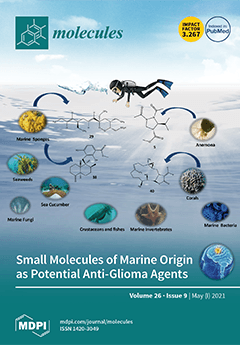 Cover Story (view full-size image): Glioma is classified by the WHO as the most common and aggressive form of tumor on CNS. Temozolomide is the only drug approved by the FDA. In the last decade, nearly fifty compounds with inhibitory activity on the proliferation of several glioma cells were isolated from anemone, seaweeds, invertebrates, sponges, corals, fungi, and crustaceous species. From these structurally diverse compounds, ten may be able to cross BBB, i.e., the pyrazolidene 5, isolated from an anemone, the most potent compound (IC50 = 0.5-3.0µM), followed by the plakortide 29 (IC50 = 4.0µM) and the polyketide 38 (IC50 = 4.1µM), both isolated from sponges, and by the polyketide 40 (IC50 = 5.1–6.9µM), isolated from corals. Some of these marine compounds could be promising leads for the discovery of new therapeutic alternatives for glioma treatment. View this paper.
Previous Issue
Volume 26, April-2
Next Issue
Volume 26, May-2
We use cookies on our website to ensure you get the best experience. Read more about our cookies here.
Accept
We have just recently launched a new version of our website. Help us to further improve by taking part in this short 5 minute survey here. here.
Never show this again