Cementogenesis is of great importance for normal teeth root development and is involved in the repair process of root resorption caused by orthodontic treatment. As highly differentiated mesenchymal cells, cementoblasts are responsible for this process under the regulation of many endogenous agents. Among these molecules, sclerostin has been much investigated recently for its distinct antagonism effect on bone metabolism. Encoded by the sost gene, sclerostin is expressed in osteocytes and cementocytes of cellular cementum. it is still unclear. In the current study, we investigated the effects of sclerostin on the processes of proliferation and differentiation; a series of experiments including MTT, apoptosis examination, alkaline phosphatase (ALP) activity, gene analysis, and alizarin red staining were carried out to evaluate the proliferation and differentiation of cementoblasts. Protein expression including osteoprotegerin (OPG) and receptor activator of nuclear factor kappa B ligand (RANKL) were also checked to analyze changes in osteoclastogenesis. Results show that sclerostin inhibits cementoblasts proliferation and differentiation, and promotes osteoclastogenesis. Interestingly, the monoclonal antibody for sclerostin has shown positive effects on osteoporosis, indicating that it may facilitate cementogenesis and benefit the treatment of cementum related diseases.
Keywords: sclerostin; cementoblast; root resorption; inhibitor sclerostin; cementoblast; root resorption; inhibitor

As a special mineralized tissue on the surfaces of teeth roots, cementum usually connects with alveolar bone via fibers and retains the position of teeth. Consisting of 61% mineral, 27% organic matrix and 12% water, cementum has a similar composition to bone [1,2]. Being an important functional section, the organic matrix in cementum is composed of collagenous proteins, mainly type I collagen (COL I), and non-collagenous proteins such as osteocalcin (OCN), osteopontin (OPN), bone sialoprotein (BSP), osteonectin, proteoglycans and several growth factors [3]. Accord to its position and composition, cementum is divided to four different subtypes, among which acellular extrinsic fiber cementum (AEFC) and cellular intrinsic fiber cementum (CIFC) are the two most abundant types [4]. Due to the similarity between cementum and bone in composition, diseases that affect the properties of bone often have an effect on cementum as well. One of the most common such diseases is orthodontics induced root resorption, which causes the loss of root cementum even dentin [5,6]. Current understanding indicates that root resorptions have been observed in more than 90% of the orthodontic teeth [6,7]. Several previous reports have demonstrated that overloading and aseptic inflammation triggered the resorption process and the related process was administered via osteoclasts under regulation of the osteoprotegerin (OPG)/receptor activator of nuclear factor kappa B ligand (RANKL) signal [8,9]. Once the resorption process is terminated, cementoblasts begin to refill the resorption lacunae with CIFC in the majority of the patients [10,11], though approximately 3% of orthodontically treated patients fail to repair these resorptions with cementum. Thus, obvious length reduction in teeth roots and increased mobility usually exist among these patients.
Cementoblasts are highly differentiated mesenchymal cells of the periodontal ligament (PDL) that build up cementum [4]. A series of studies have disclosed the properties of cementoblasts, including expression of mineralization related genes and alkaline phosphatase (ALP) [12], induction of mineralization in vitro [13] and response to mechanical loading [14]. Further investigations showed that cementoblast function is affected by a number of endogenous molecules, such as bone morphogenetic protein (BMP), prostaglandin E2 (PGE2), and amelogenins [15–18]. Since cementoblast is the main cell type for root resorption repair, it is of importance and necessity to clarify the regulation mechanisms. Recently, scletrostin, a secreted glycoprotein, has attracted the interests of many researchers because of its distinct effect on bone metabolism [19,20]. Encoded by the sost gene, sclerostin is mainly expressed in osteocytes. Recent studies showed that sclerostin was first found from the patients of sclerosteosis and van Buchem disease, which was often associated with high bone mass [21,22]. Animal experiments based on transgenic mice with gain or loss function of sost have shown that slerostin can antagonise bone formation by both inhibiting bone formation and inducing bone resorption [23–25]. In addition it is now widely accepted that sclerostin is also involved in the response of bone to mechanical loading. When osteocytes sense the mechanical load, they reduce the expression of sclerostin [26,27]. This down-regulation allows more Wnts to bind with low-density lipoprotein receptor-related protein 5 (Lrp5) and activate Wnt/β-catenin signaling pathways [28]. Due to the biological actions of sclerostin, a monoclonal antibody was created and employed to treat osteoporosis [29,30].
Sclerostin is expressed in both osteocytes and cementocytes in dental tissues [31]. To the best of our knowledge, there is still no evidence to clarify if cementocytes have similar mechanical sensing ability as osteocytes do in bone. However, secreted sclerostin may penetrate through the periodontal ligament and affect the cementoblast function when orthodontic force is loaded. The effects of sclerostin on cementoblast will thus be useful to more fully understand to benefit the treatment of root resorption.

Cells were seeded at a density of 3 × l03 per well in 96-well plates in α-MEM containing 1% FBS for 24 h, then media were changed to α-MEM with sclerostin of different concentrations. After 24 h incubation, 10 μL MTT (5 g/L) was added to each well and incubated for another 4 h. Supernatant was then removed and 150 μL DMSO was added. It was shaken for 10 min until the crystal was dissolved. The absorbance at 490 nm was measured with a micro-ELISA reader (Synergy2, Biotek, Winooski, VT, USA). The proliferation rate was calculated compared to the control group.

Twenty thousand cells per well were cultured overnight in 24-well plates and treated with sclerostin for 24 h. Then cell morphology was assessed using calcein-AM staining. Briefly, cells in 24-well plates were washed twice with PBS (phosphate-buffered saline, pH 7.4), then cells were stained with calcein-AM (10 ng/mL) for 20 min at 4 °C in the dark. Cells were observed using fluorescence microscopy (excitation (Ex), 365 nm and emission (Em), 480 nm).

Cells were incubated with or without sclerostin for 24 h, washed twice with PBS, adjusted to 100 μL of the solution and transferred to a 1-mL centrifuge tube (2 × 105 cells). Then, 5 μL of Annexin V–FITC and 10 μL of PI were added and cells were gently vortexed. Cells were then incubated for 15 min at room temperature in the dark and 400 μL of 1× binding buffer was added to each tube. Finally, cells were analyzed by flow cytometer (FACS101, Becton Dickinson, Franklin Lakes, NJ, USA).

Since GAPDH has been applied as the most widely used internal control gene in molecular genetic techniques, including studies focused on the OCCM-30 cementoblast lineage, we selected it as a reference gene here. Pre-experiments based on our system indicated that the Ct values of GAPDH in different groups were very similar with each other. We thus believe that the expression of GAPDH is consistent in these circumstances, and may be utilzed as an efficient and single reference gene in our study [15,34,44].
In detail, cells were seeded in a 24-well plate at 104/well to determine gene expression. After 24 h incubation, media was changed to α-MEM conditioned media containing 5% FBS, 50 mg/mL ascorbic acid and 10 mmol/L β-glycerolphosphate supplemented with sclerostin. After a subsequent 24 h culture, total RNA was isolated using EASY spin Plus (BLKW, Beijing, China) according to the manufacturer’s instructions. RNA was quantified spectrophotometrically at 260 nm (Nanodrop ND1000, Wilmington, DE, USA), and quality was examined using the ratio of absorption at 260 and 280 nm with a ratio between 1.9 and 2.1 as acceptable. Reverse transcription was performed with 2 μg of total RNA using PrimeScript Rtreagent Kit (Takara Co, Otsu, Japan). Each sample was then analyzed by quantitative real-time PCR (qPCR) (Stratagene MX3000P, La Jolla, CA, USA) in the SYBR Premix Ex TapII (Takara Co, Otsu, Japan), setting the cycles as follows: 10 s/95 °C PCR initial activation step; 40 cycles of denaturation for 20 s/95 °C and annealing step for 20 s/60 °C. Amplification efficiency of Runx-2, OPN, OCN, BSP and GAPDH is 99%, 93.4%, 99.9%, 98.6% and 100%, respectively. The change in mRNA levels was determined by the formula 2−(ΔΔCT), where ΔCT is the value from the threshold cycle (CT) of the treated sample subtracted from the CT value of untreated or zero time-point control sample. The relative amount of mRNA in the sample was normalized to GAPDH mRNA. Primers (Invitrogen, Carlsbad, CA, US) used in this research were shown in Table 1 according to previous reports.

Cells were seeded in 24-well plates at a concentration of 5 × 104 cells/well, and cultured for 24 h. Then the culture medium was changed to alpha-MEM with or without sclerostin. Culture medium was collected after another 24 h culture and prepared for OPG and RANKL ELISA assay. The assays were performed according to the protocol of the manufacturer using a specific ELISA kit (BlueGene Biotech, Shanghai, China). Each protein sample was analyzedin triplicate with parallel 3-well culture plates to ensure accurate results.

Cells were plated in 24-well plates in DMEM/F12 containing 10% FBS. After 24 h, cells were changed to α-MEM conditioned media containing 5% FBS, 50 mg/mL ascorbic acid and 10 mmol/L β-glycerolphosphate, plus different concentrations of sclerostin. The media was changed every 4 days and mineralization of extracellular matrix was evaluated on day 10 by Alizarin red staining. After taking photographs, 1mL cetylpyridinimu chloride (1%) was added into the plate, followed by measuring OD values at spectrophotometrically at 540 nm.

Cells seeded in 24-well plates were incubated with α-MEM conditioned media containing 5% FBS, 50 mg/mL ascorbic acid and 10 mmol/L β-glycerolphosphate supplemented with sclerostin. Media was changed every 3 days and cells were dissolved in 0.05% Triton X-100 buffer 7 days later. Cell lysates were analyzed for ALP activity in 96-wells plates according to instructions. The plates were then read spectrophotometrically at 405 nm. All ALP activity results were normalized to the total protein in the cell lysate.

All experiments in this study were performed three times, and representative findings are shown. Experimental values are given as means ± SD. One-way analysis of variance (ANOVA) was carried to determine the significance between control and treatments groups.

Sclerostin was shown to suppress cementoblast proliferation and promote apoptosis, while differentiation was also inhibited in a dose-dependent manner. Osteoclastogenesis affected by OPG and RANKL was enhanced in the presence of sclerostin. These findings along with previous studies indicate that sclerostin is involved in homeostasis through the negative regulation of cellular cementum formation. Sclerostin thereby shows significant potential as a specific target for the treatment of cementum related diseases. 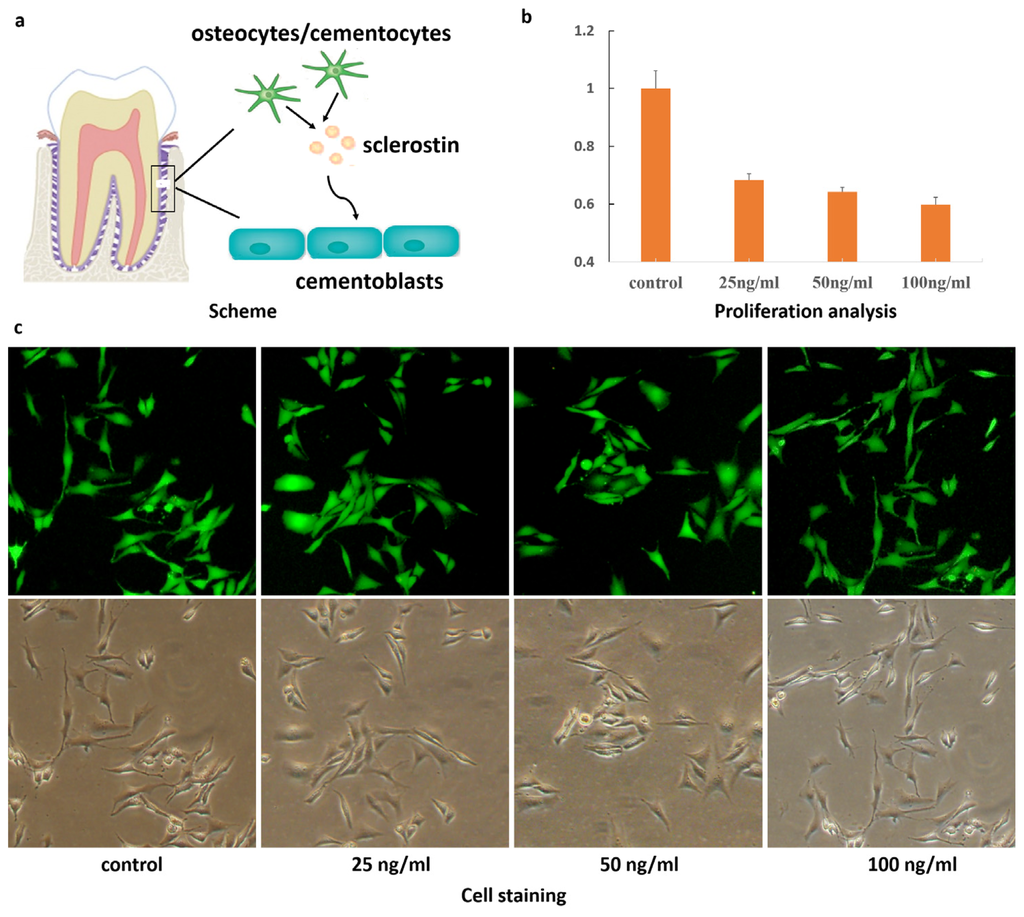 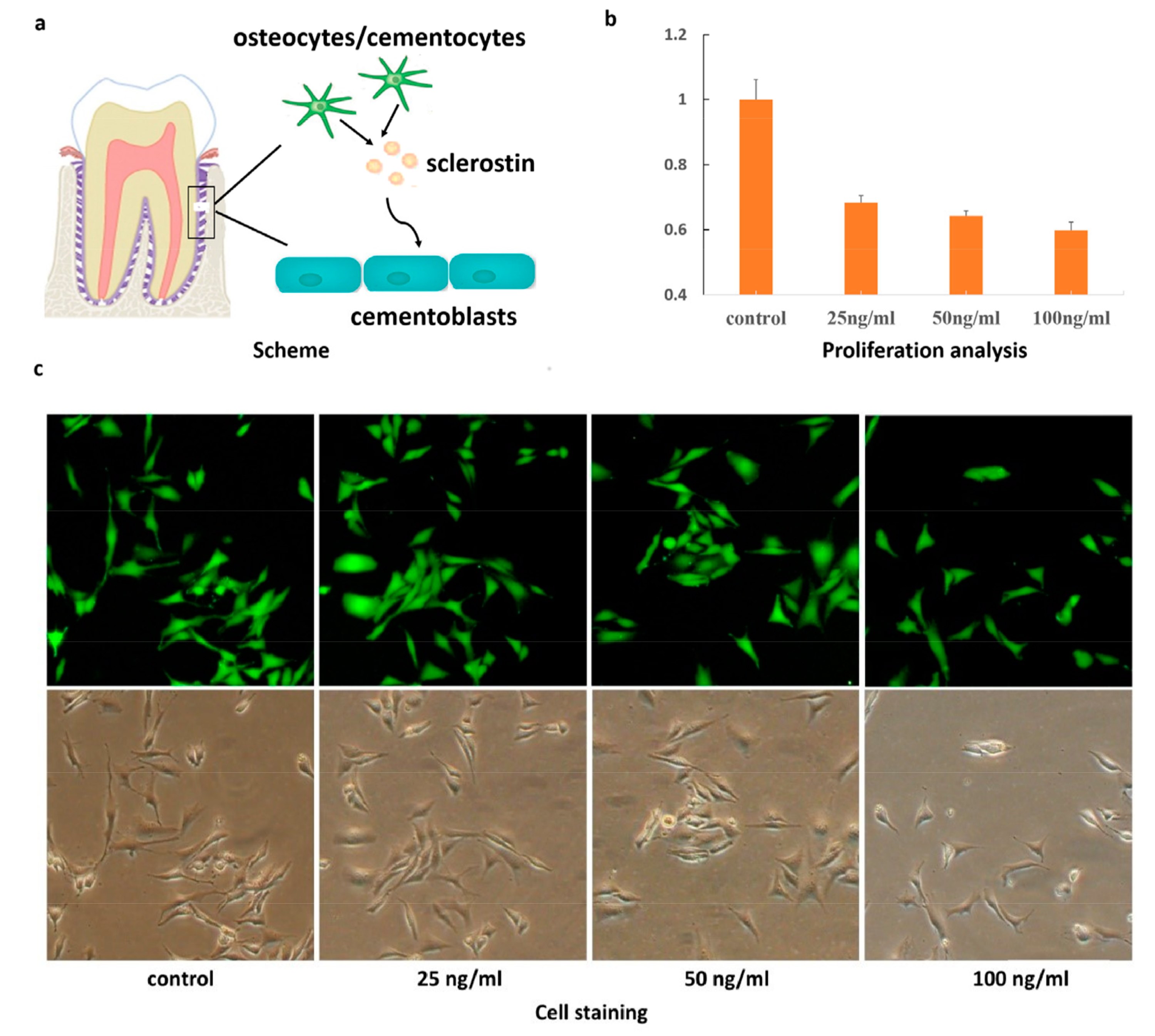 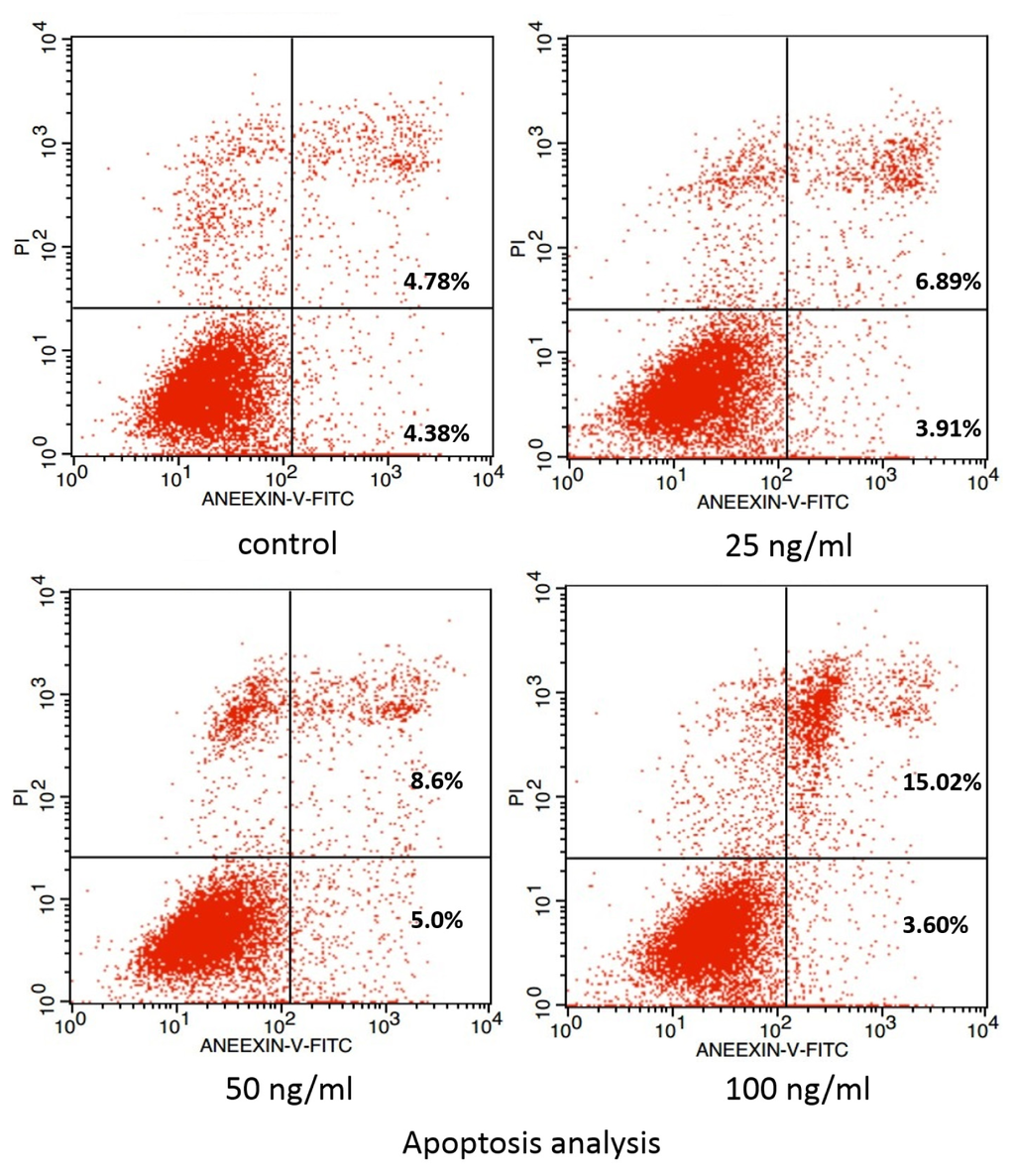 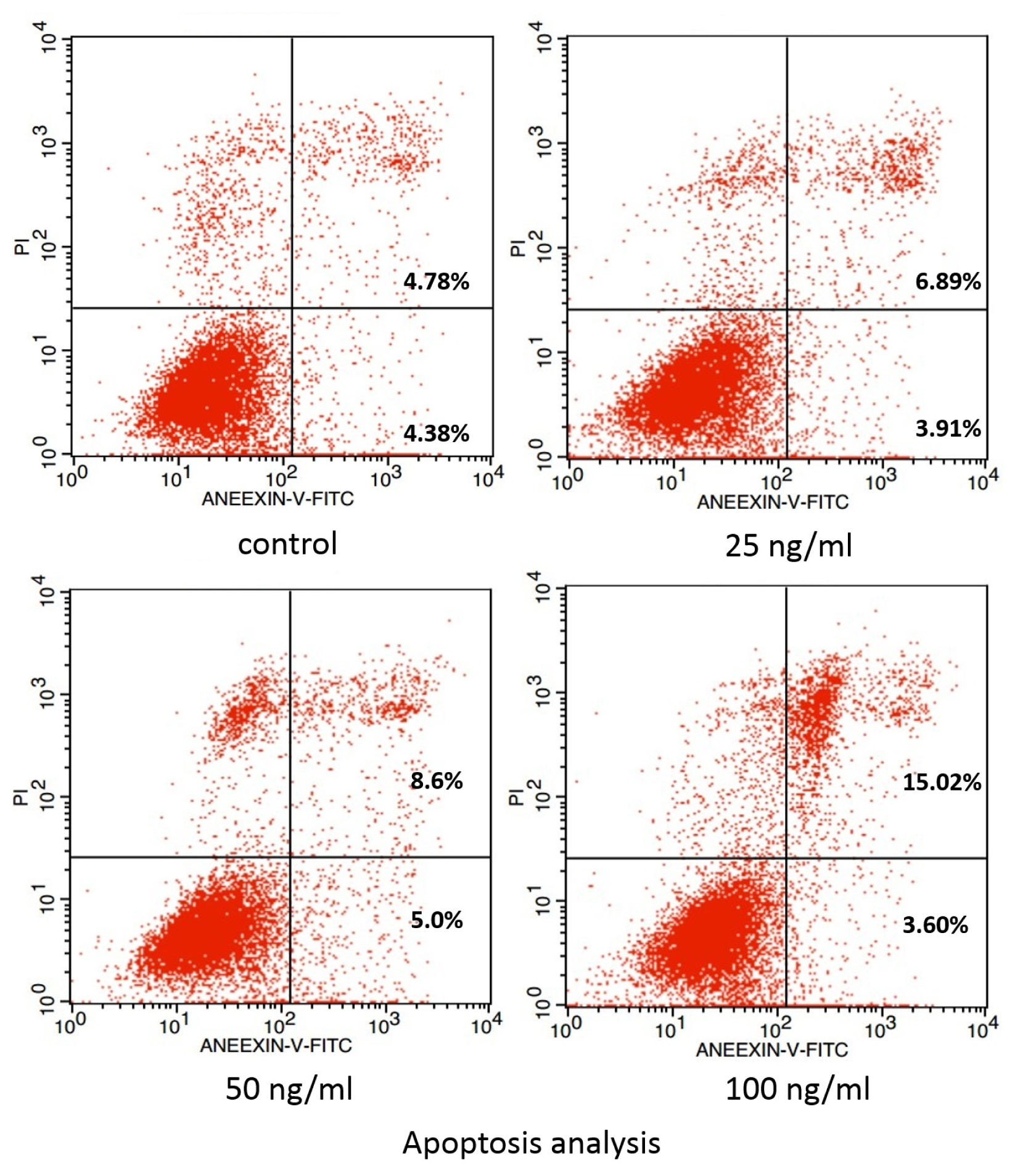 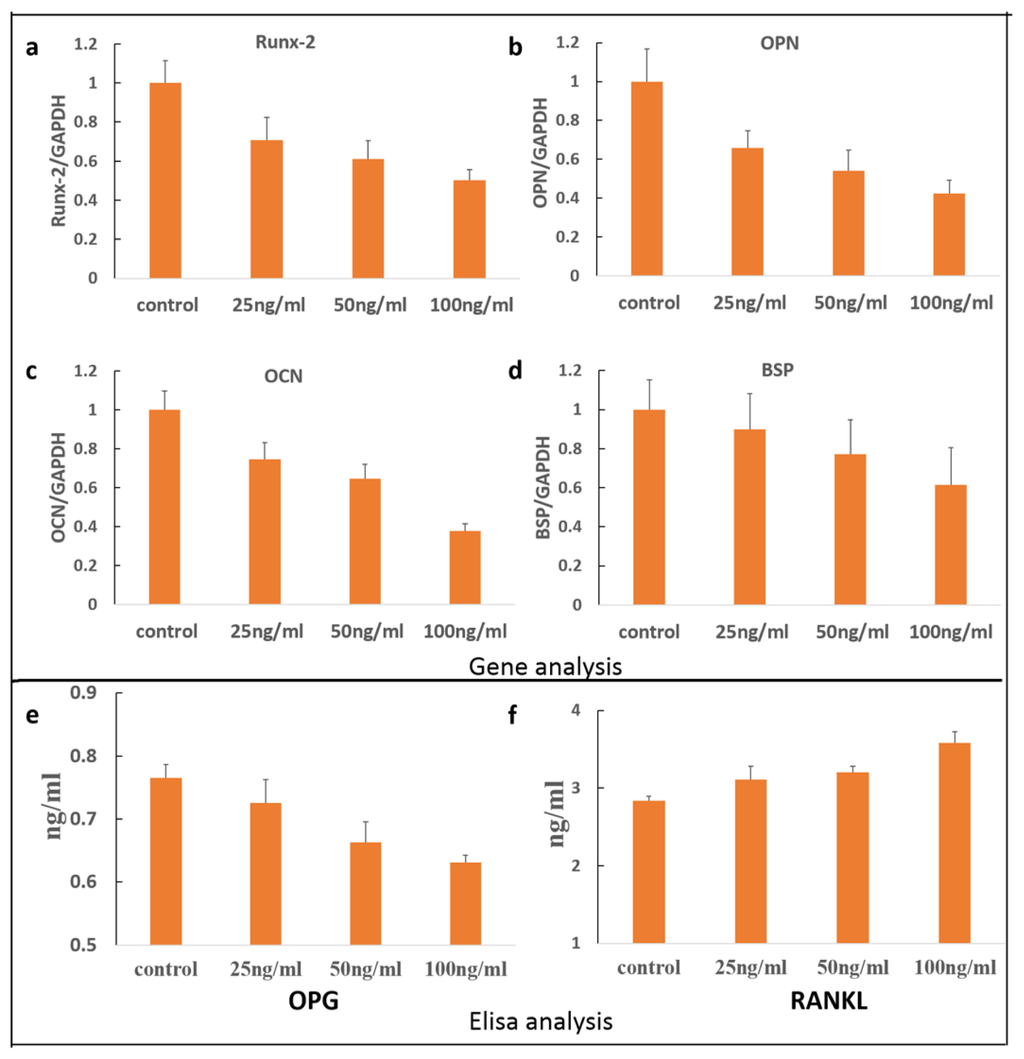 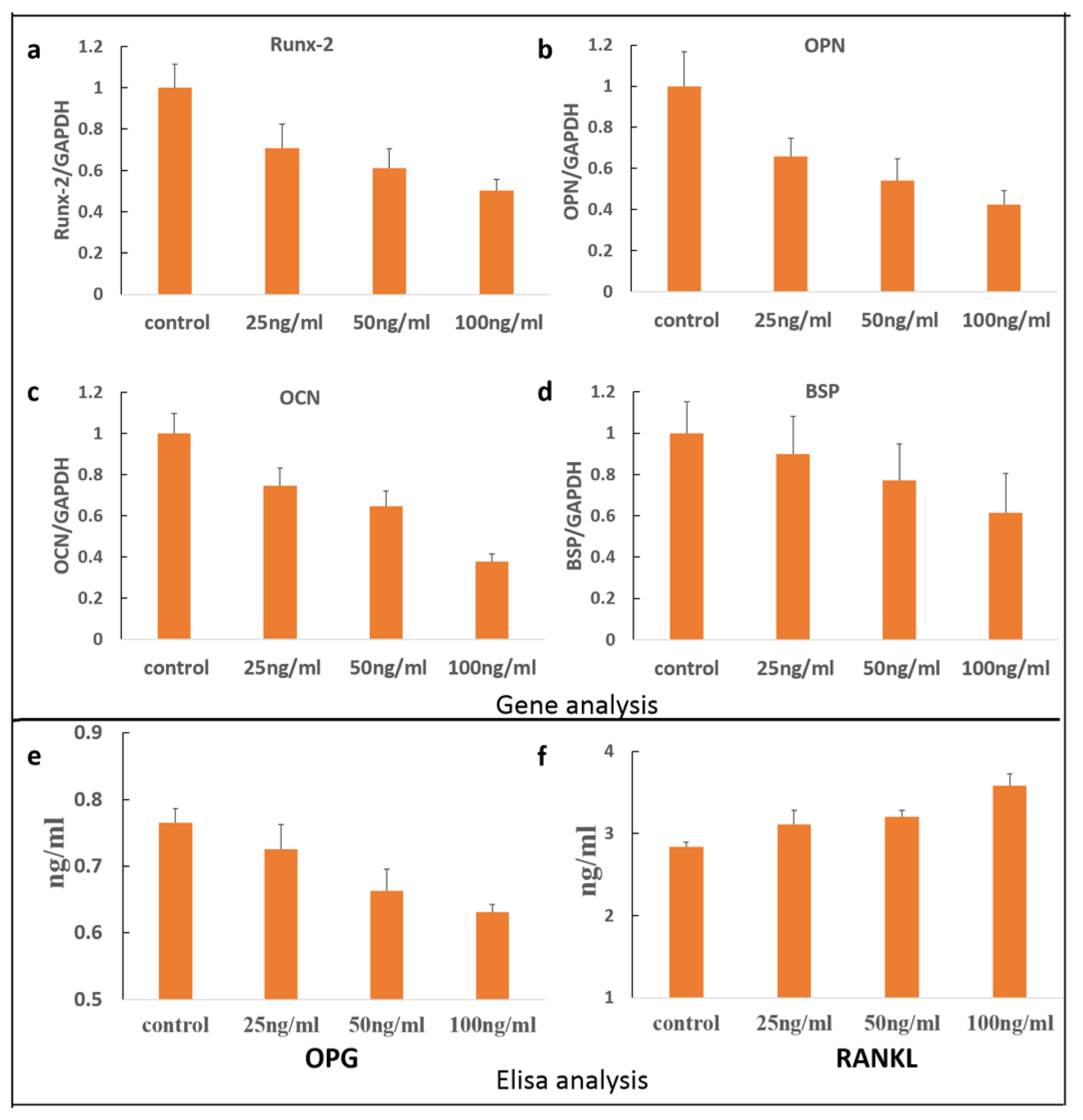 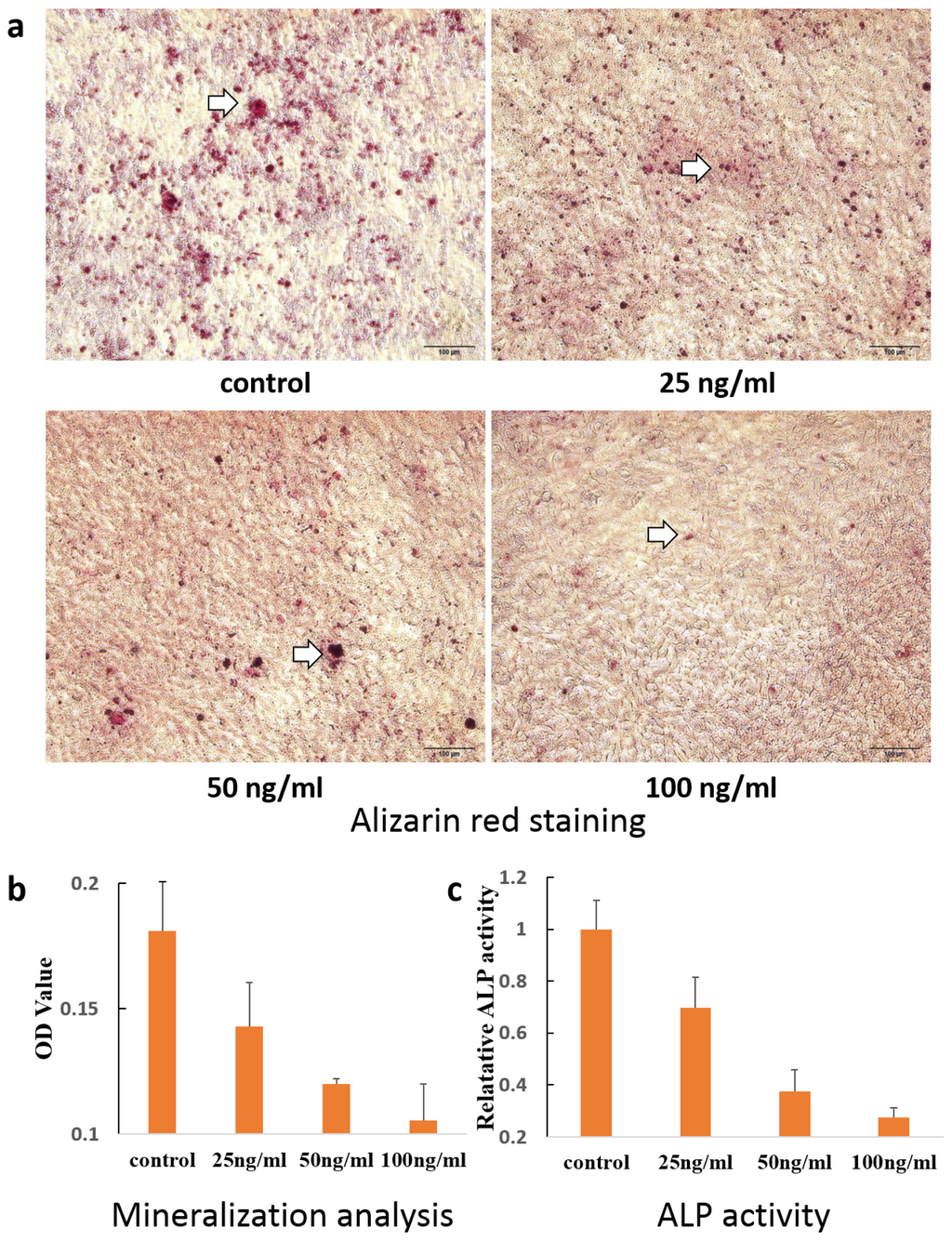 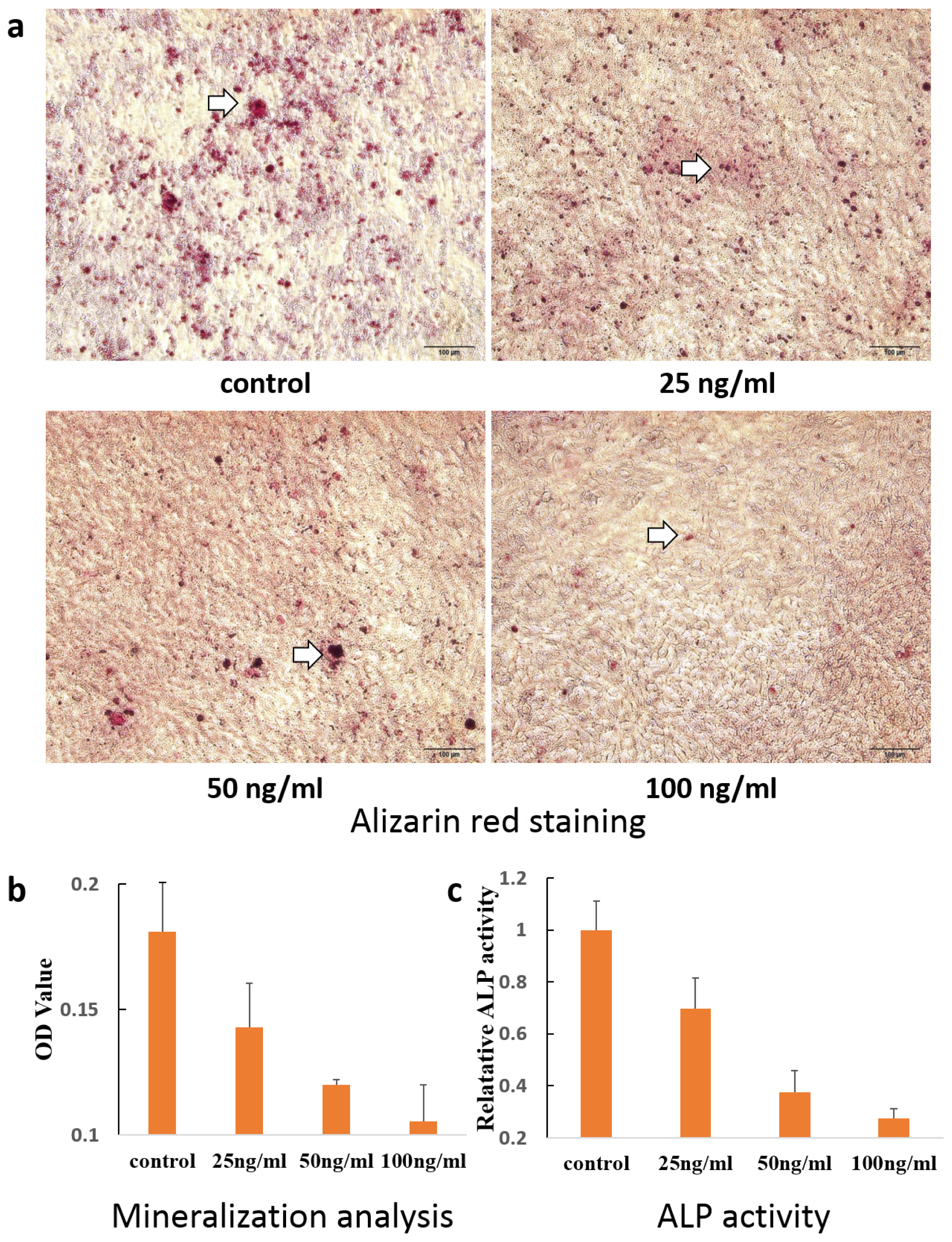 We would like to thank Chen Liu from the First Hospital of Jilin University, and Sema S. Hakki at Selcuk University, for their help during the experimental investigations. This work was supported by the Specialized Research Fund for the Doctoral Program of Higher Education (SRFDP 20110061110072), the National Natural Science Foundation of China (NSFC 81170999) and the Foundation from the Department of Health of Jilin Province (2011Z071).