Does the Neuroprotective Role of Anandamide Display Diurnal Variations?
Next Article in Special Issue

Calbindin-D9k (CaBP-9k) binds calcium with high affinity and regulates the distribution of free calcium in the cytoplasm. The expression of CaBP-9k is detected primarily in intestine that is vitamin D target tissue, and accumulates in the enterocytes of the duodenal villi. These enterocytes are the clearest example of vitamin D responsive cells, and the presence of CaBP-9k within them accentuates calcium absorption mediated by active transcellular calcium transport. It has been well established that the expression of CaBP-9k is mediated with vitamin D response element on its promoter and it regulates the amount of intracellular calcium in order to prevent cell death from reaching the toxicity of free calcium. There is now little doubt that glucocorticoid also decreases CaBP-9k expression in duodenal epithelial cells. In addition, it was reported that the level of CaBP-9k gene in enterocytes is increased in pregnancy when the plasma estradiol concentration is generally associated with a concomitant increase. Although calcium homeostasis was not disturbed in mice lacking the CaBP-9k gene, we found that CaBP-9k has a buffering role of free calcium in the cytosolic environment beyond that of calcium transfer. To expand our knowledge of the biological functions of CaBP-9k, our research has focused on defining the biological significance of intracellular CaBP-9k. Our findings suggest that the CaBP-9k gene is involved in compensatory induction of other calcium transporter genes in duodenal epithelial cells. This article summarizes the findings from recent studies on the expression and the functions of CaBP-9k in the small intestine. View Full-Text
Keywords: calbindin; transcellular pathway; vitamin D receptor; duodenum; calcium absorption; knockout mice calbindin; transcellular pathway; vitamin D receptor; duodenum; calcium absorption; knockout mice
►▼ Show Figures 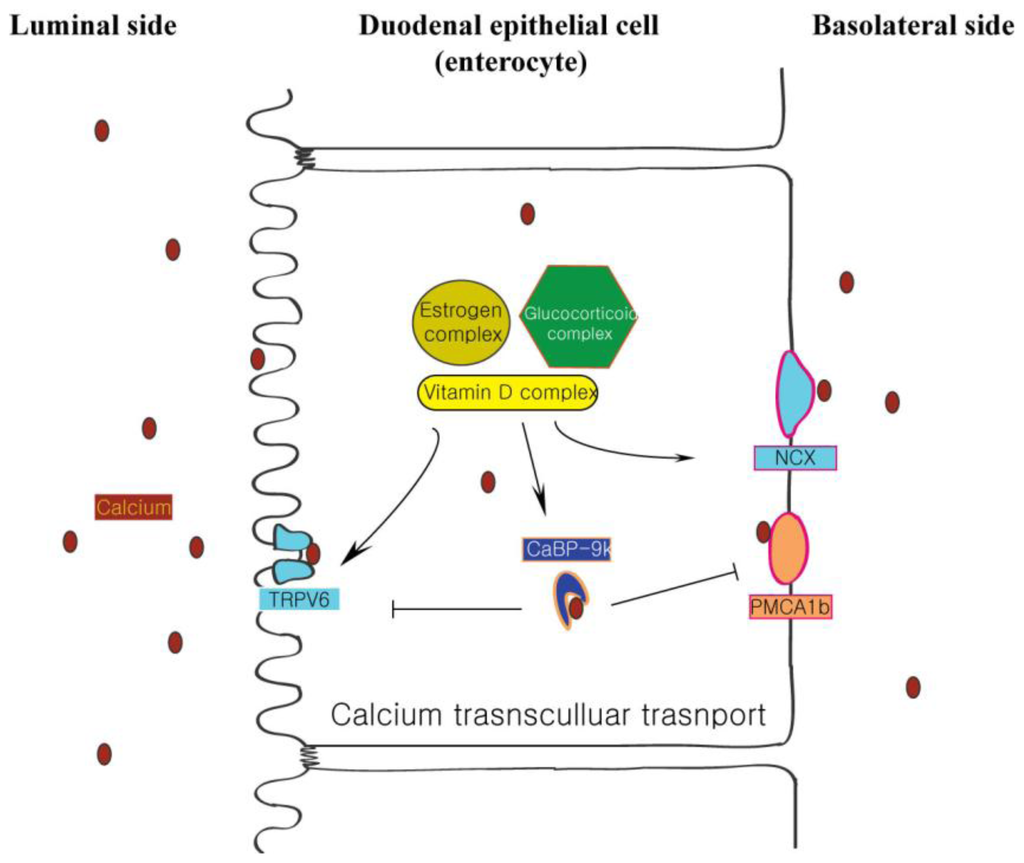