2.1. Establishment of the Resting Cell System

2.5. Effects of Bacteriocin as Self-Inducer

It has been reported that bacteriocin biosynthesis can be dependent on the presence of an extracellular peptide of the bacteriocin itself produced by the strain, and that bacteriocin may act as an extracellular regulators of its own biosynthesis [19,20]. The effects of the added dose and time of Lac-B23 as inducer on its own production were investigated (Figures 5 and 6).
The results suggested that bacteriocin is able to induce ist own production in a dose- and time-dependent manner. the threshold of induction occurred at 20 U/mL, and temporal effectiveness assessments revealed that Lac-B23 must be added before stationary phase (before 6 h) when it was used as inducer. It is indicated that adding extracellular inducer peptide is necessary to achieve a high level of bacteriocin production. This is in agreement with the report of Kleerebezem [32]. Time-dependent control strategies for enhancing synthesis of bacteriocin have been studied by using artificial neural networks and genetic algorithms [33]. The optimization of dose-dependent and time-dependent of bacteriocin Lac-B23 is currently in progress. The fundamental regulation mechanisms have been identified through a quorum–sensing based pathway, composed of an induction peptide, a histidine protein kinase and a response regulator [34]. Further studies of the regulation of bacteriocin biosynthesis on the transcription level are required.

Lactobacillus paracasei J23, which is the bacteriocin Lac-B23 producer obtained from previous screening efforts, was used in this work. L. monocytogenes was used as the indicator organism in the bacteriocin activity assay.

The antagonistic activity was measured by the well-diffusion method. Bacteriocin sample were serially diluted two-fold, and the reciprocal of the highest inhibitory dilution was used to express the arbitrary activity units (AU) per milliliter. In order to eliminate the inhibition of lactic acid on the test organisms, the tested supernatants were adjusted to pH 6.0 with 1 M NaOH and treated with catalase (1 mg/mL) to exclude the inhibition due to hydrogen peroxide production.

Five different culture media (as shown in Table 1) were formulated based on MRS medium and our previous preliminary study. Fifty milliliters of different culture medium was inoculated with 1% of 24 h old Lactobacillus paracasei J23 culture and incubated at 37 °C for 24 h. The antagonistic activity, nucleic acid content (NAC) and dried cell weight (DCW) of Lactobacillus paracasei J23 were examined. The culture medium was confirmed as the resting cell system based on the strong antimicrobial activity, and little change in nucleic acid content. The effect of time and temperature on Lac-B23 production in the resting cell system was investigated at 25, 30, 37 °C for 24 h, respectively. The cell concentration was assayed with a spectrophotometer (Shanghai Spectrum Co. Ltd, Shangshai, China) at 600 nm.

The Lactobacillus paracasei J23 cell suspension was centrifuged at 8000× g for 15 min, and the cell pellets were washed three times with trichloroacetic acid and ethanol, then centrifuged at 8000× g for 15 min and extraction with 5% trichloroacetic acid at 80 °C for 30 min. The supernatant was diluted and the optical density (OD 260 nm) was assayed with spectrophotometer. ΔNucleic acid (g/L) was measured as the difference of nucleic acid content between before and after resting cultures.

The effects of amino acids (Glu, Gly, Cys, Tyr, Ala), glycerol, and pyruvic acid on bacteriocin production were investigated by using the established resting cell system. The above five amino acids (0.5%, 1.5%, 2.5%), glycerol (v/v, 0.5%, 1.0%, 1.5%, 2.0%), pyruvic acid (10 g/L, 20 g/L, 30 g/L, 40 g/L) were added to the resting cell system for the examination of the effects on the bacteriocin production, respectively. Values are expressed as mean value and standard deviation of triplicate determinations.

The added dose (5 U/mL to 40 U/mL) and added time (0–12 h) of bacteriocin Lac-B23 as self-inducer were investigated in the established resting cell system.

One-way ANOVA was applied to the result of technological properties. All experiments were performed 3 times, and the values are expressed as mean value and standard deviation of triplicate determinations. The SPSS software package (version 16.0, SPSS Inc., Chicago, IL, USA) was used for this purpose. 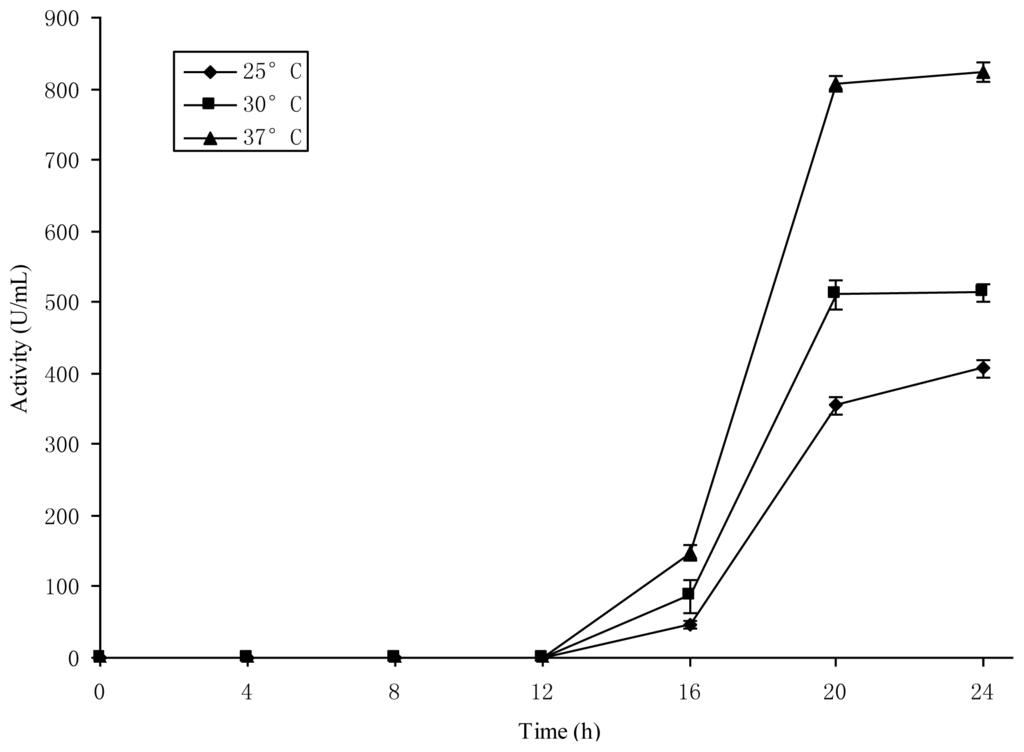 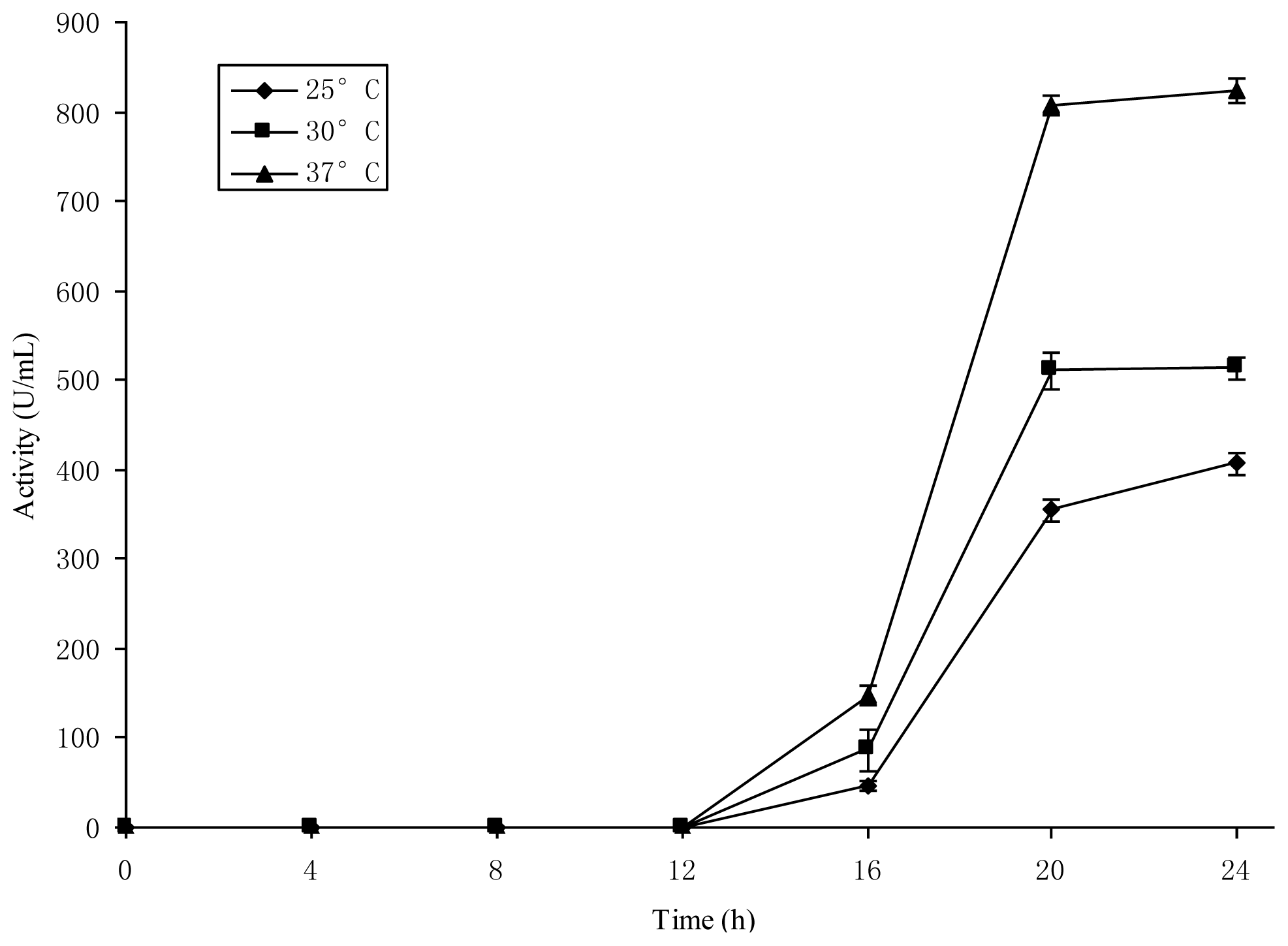 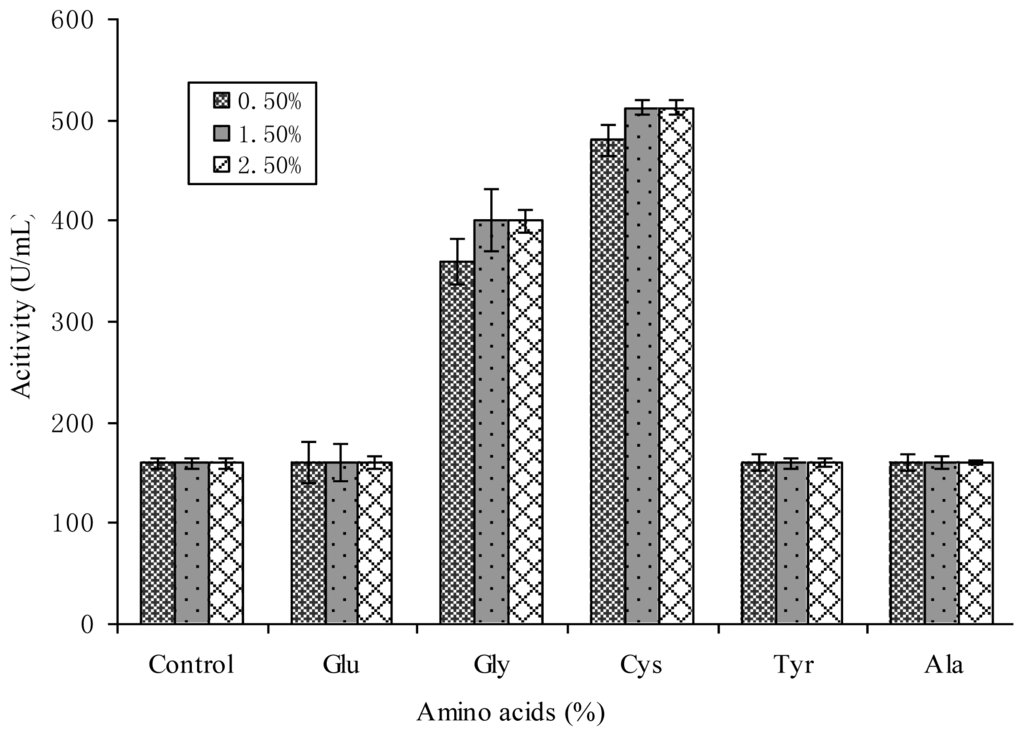 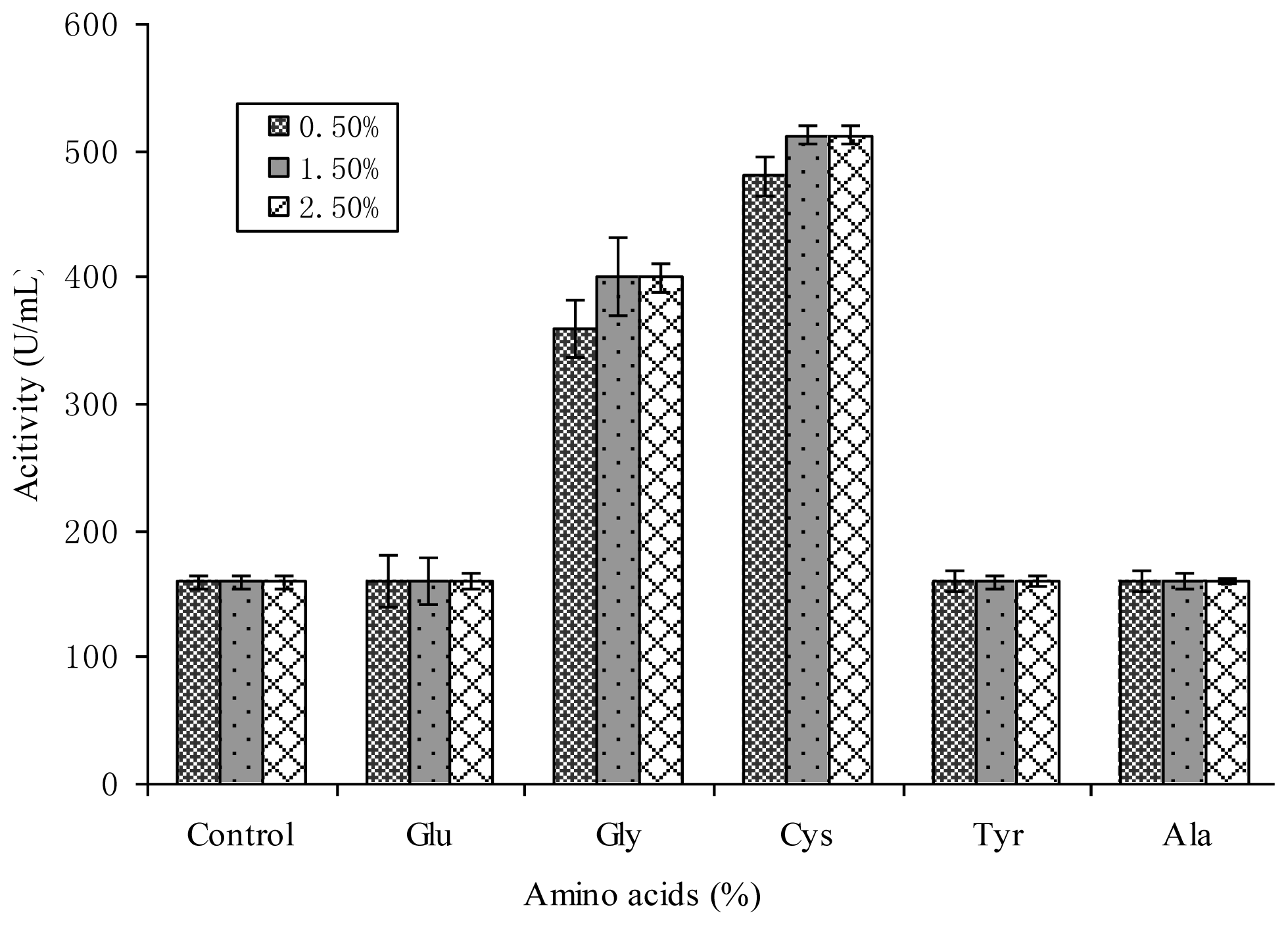 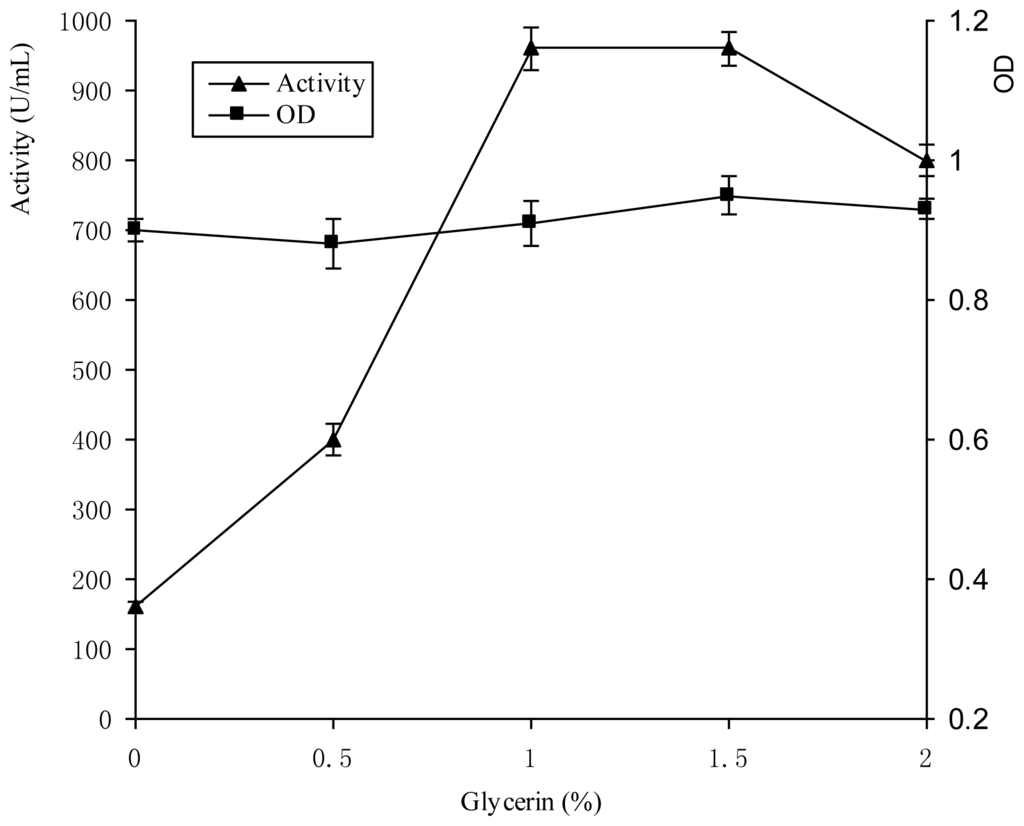 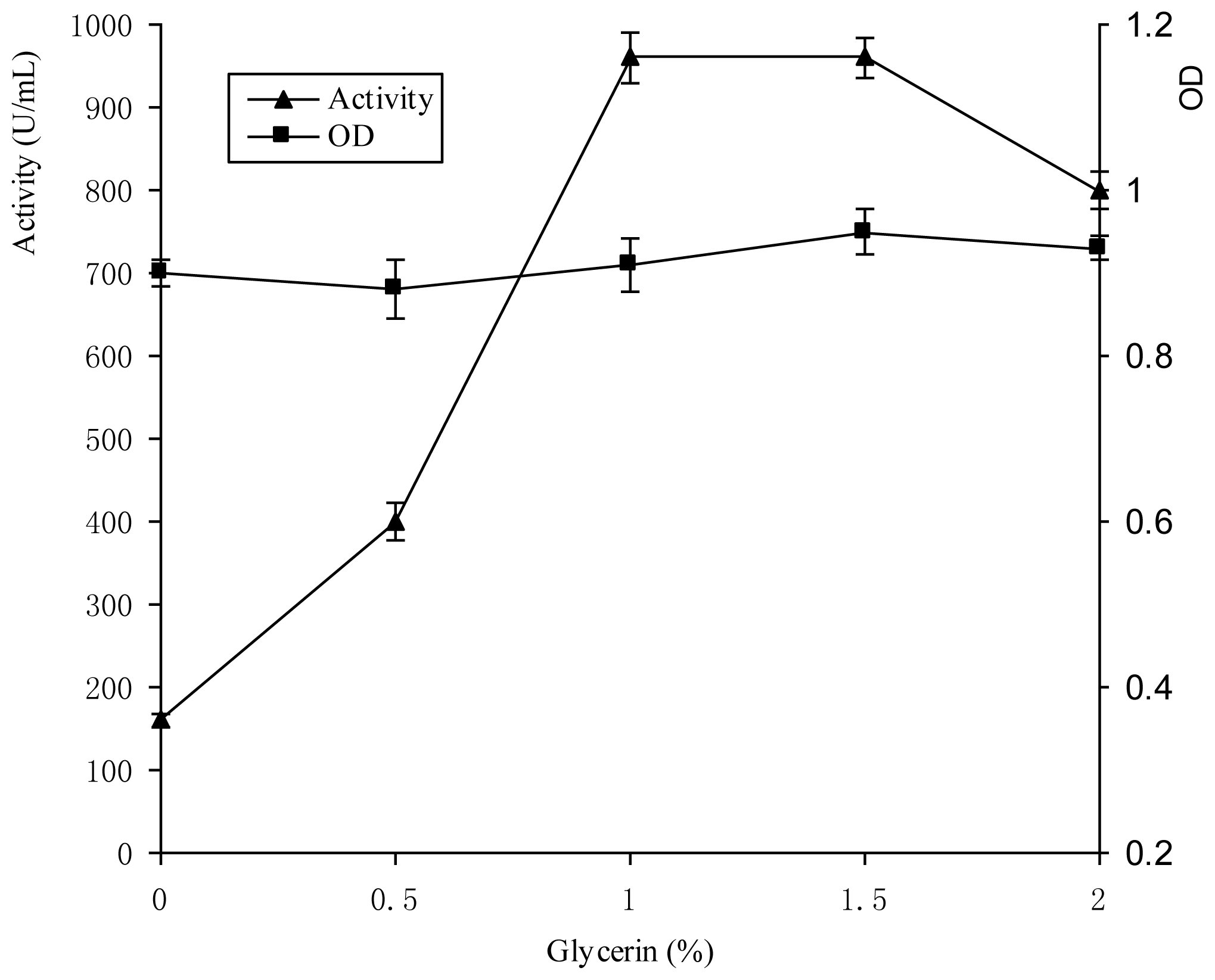 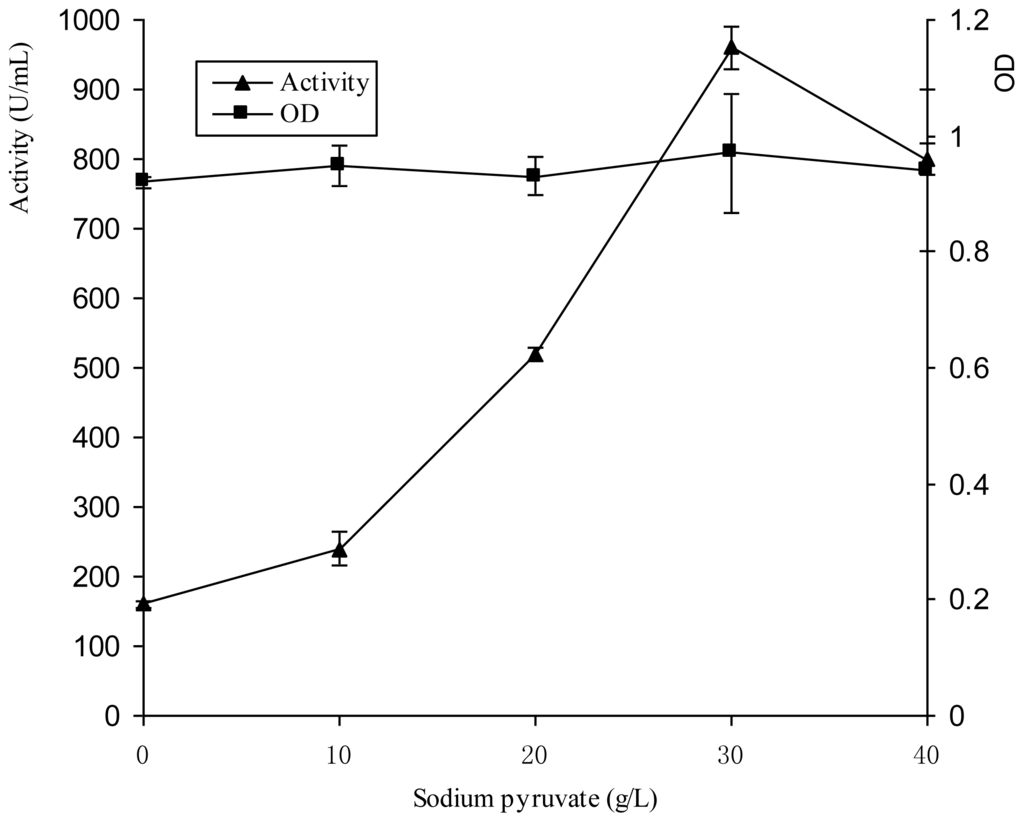 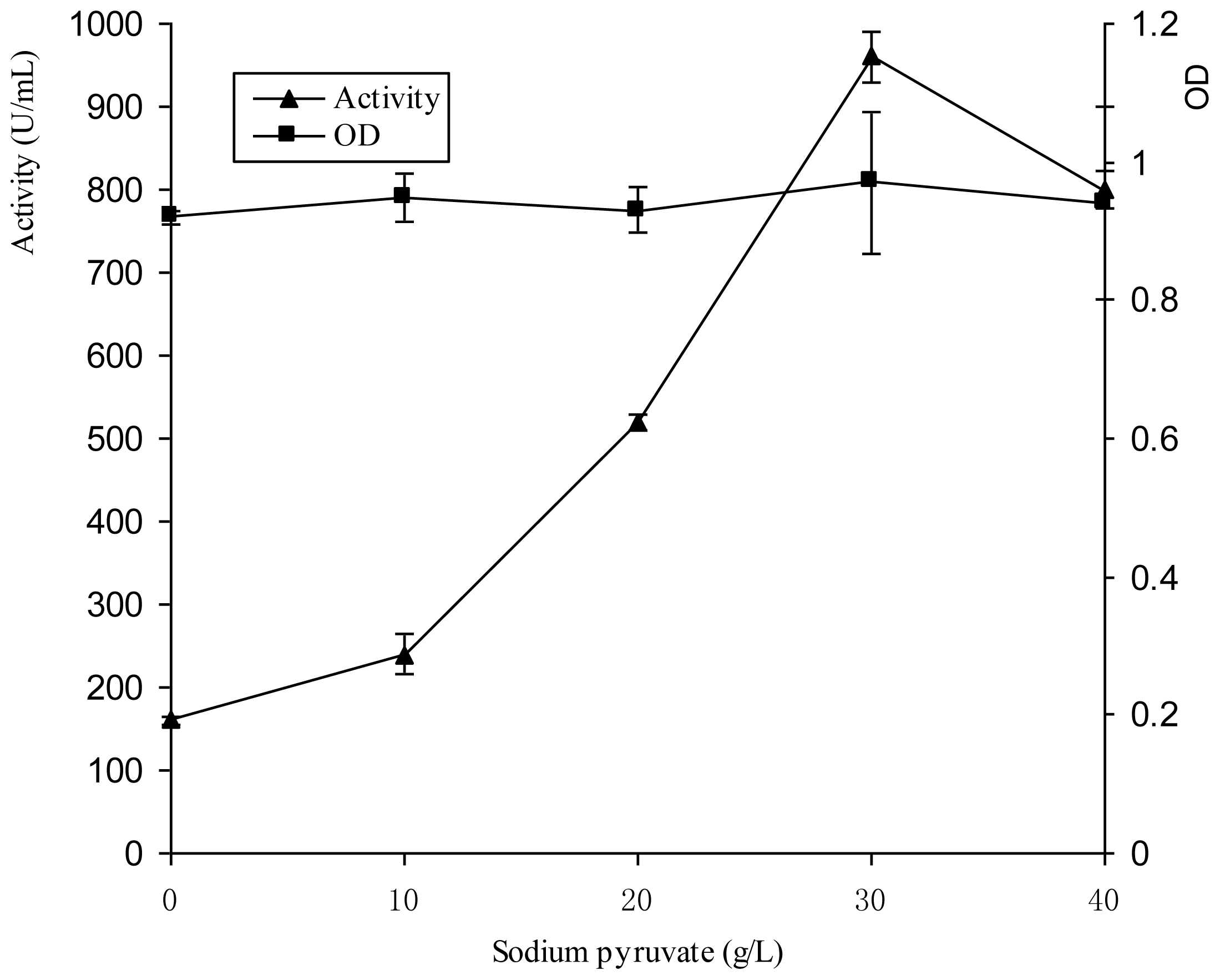 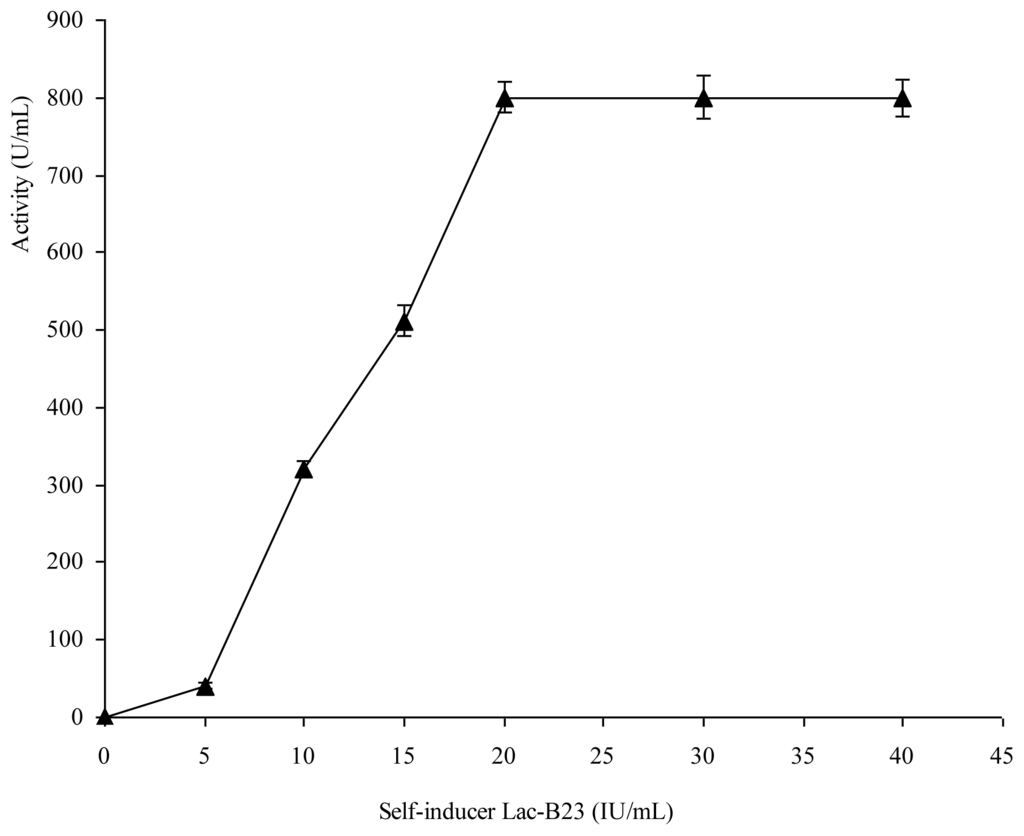 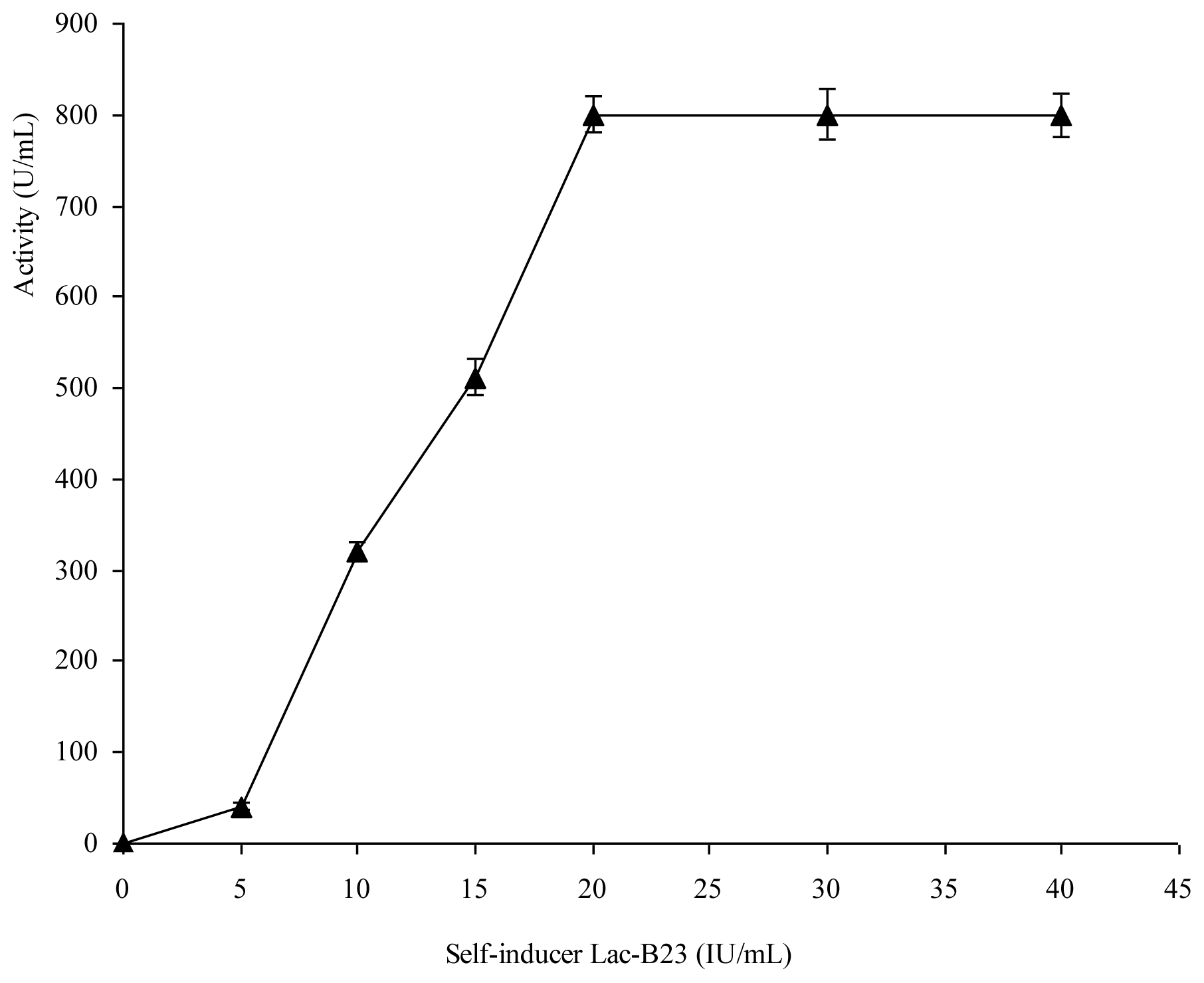 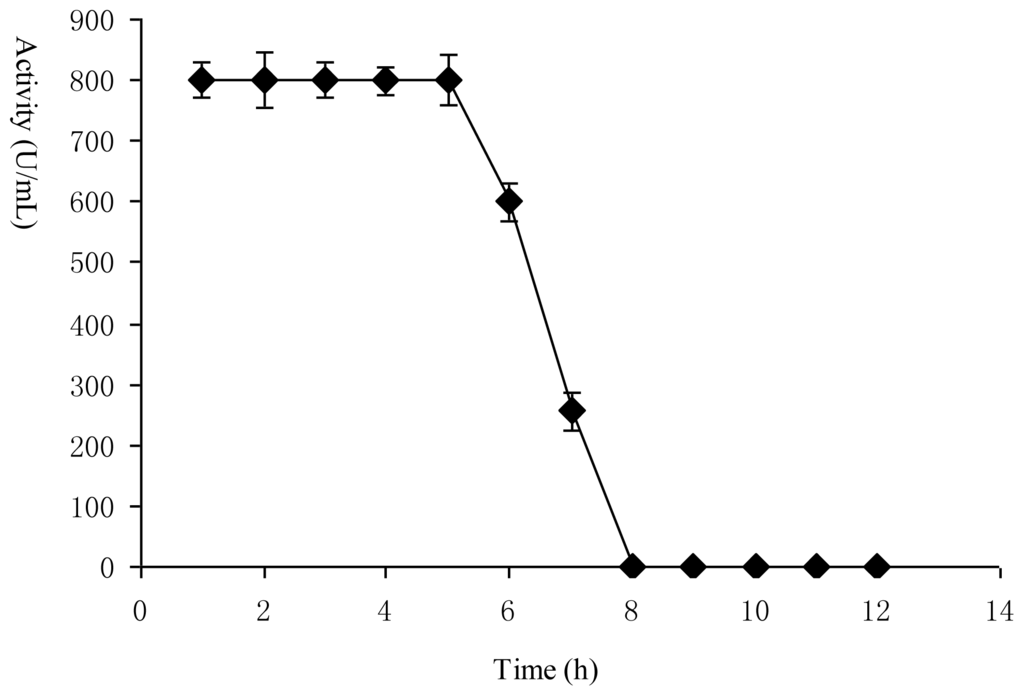 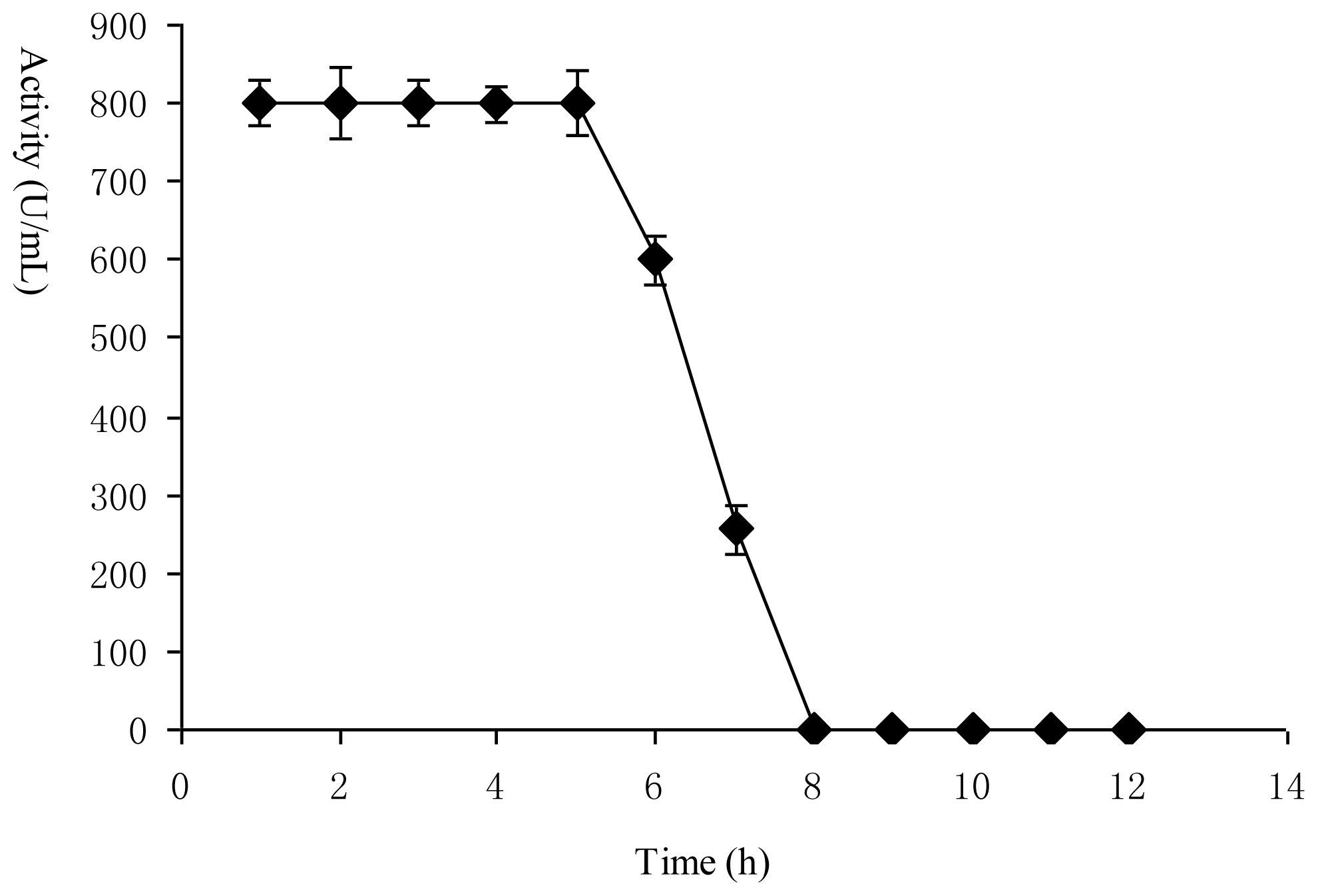