Acute kidney injury (AKI) induced by renal ischemia leads to significant morbidity and mortality [1]. A number of pathologic processes contribute to AKI, including endothelial and epithelial cell death, intratubular obstruction, changes in local microvascular blood flow, as well as immunological and inflammatory processes [2]. The relative contribution of each to AKI is uncertain. Limited understanding of the cellular mechanisms of AKI complicates the development of an effective treatment. Recently, there are many in vivo and in vitro studies supporting a pathogenic role for different forms of cell death, including necrosis, apoptosis, and autophagy in AKI [2–5]. This indicates that targeting these cell deaths will probably improve the outcome of AKI.
Necroptosis is a recently discovered, regulated form of programmed necrosis initiated by the activation of tumor necrosis factor alpha (TNF-α) and/or Fas that is distinct from caspase-dependent apoptotic cell death [6]. Necrostatin-1 (Nec-1), a small molecule inhibitor, originally identified by Degterev in a chemical library screen, was found to selectively target the kinase activity of RIP1, a key mediator of necroptosis [7,8]. Nec-1 is commercially available and has been used extensively both in vitro and in vivo by multiple groups to elucidate the role of necroptosis [9–13]. Usually, it does not protect against caspase-dependent apoptosis, or against other programmed cell death, such as autophagy [7]. However, subsequent studies showed that Nec-1 had an effect on autophagy and apoptosis in some cell injury models [14,15]. A recent study also demonstrated that Nec-1 prevented osmotic nephrosis and contrast-induced AKI in Mice [16]. Given the aforementioned roles of Nec-1, we then asked whether Nec-1 affects the cell injury of AKI induced by simulated ischemia in the rat tubular cell line NRK-52E.
In the present study, we explored whether the addition of Nec-1 had a protective effect on cell injury, induced by simulated ischemia, in rat tubular cell line NRK-52E, In addition, we also investigated the mechanism of Nec-1 that attenuates cell injury in this renal ischemia model.

AKI induced by renal ischemia is a common clinical complication characterized by an abrupt decrease in the glomerular filtration rate (GFR). Despite supportive care, including renal replacement therapy, the five-year mortality after AKI remains ~50% [17]. Limited understanding of the cellular mechanisms of AKI induced by renal ischemia complicates the development of an effective treatment. Abundant evidence shows that necrosis, apoptosis, necroptosis, and autophagy are involved in AKI [2–5]. This indicates that targeting these cell deaths will probably improve the outcome of AKI.
Emerging evidences suggest that necroptosis is closely related to other cell death, at least in particular conditions [14,18,19]. Recently, Linkermann et al. also demonstrated the pathophysiological coexistence and corelevance of cyclophilin (Cyp)D-mediated mitochondrial permeability transition (MPT) and receptor interacting protein kinase (RIPK)1-mediated necroptosis [20]. The parallel existence of the two separate pathways that induce regulated necrosis in the same organ, following the same ischemic stimulus, demonstrates the complexity in the pathophysiology of ischemia-reperfusion injury. Nec-1 is a key mediator of necroptosis, originally identified, selectively targets the kinase activity of RIP1. It has recently been discussed to directly influence other cell deaths, or to have other functions, in addition to its effects to block necroptosis [14,18,19,21]. Thus, further understanding of these additional roles of Nec-1 promise new therapeutic possibilities.
In the present study, we hypothesized that administration of Nec-1 could produce an effect on ischemia-induced renal tubular epithelial cell death. To test our hypothesis, we simulated ischemic AKI in rat tubular cell line NRK-52E with TNF-α stimulation and ATP depletion, and then we examined the potential effects of Nec-1 on ischemia-induced cell death. In addition, we also explored the potential mechanism of Nec-1 on cell death in, such a renal ischemia model.
In this study, we found that cell death, determined by Hoechst staining and flow cytometry with annexin V and PI double stains, was significantly increased in simulated ischemia injury of NRK-52E cells with TNF-α stimulation and ATP depletion. However, the effect of ischemia injury induced cell death in NRK-52E cells was blocked by concomitant treatment with Nec-1. Similarly, we also found cell viability was markedly improved in ischemia injury of NRK-52E cells after using Nec-1. These results suggest that Nec-1 has a protective effect on ischemia injury of renal tubular epithelial cells.
To further explore the mechanisms of Nec-1 inhibited ischemia injury-induced cell death, we next investigated the protein expression of Drp1, a member of the dynamin family of large GTPases [22,23]. Drp1 is a primarily cytoplasmic protein which, when activated, can form ring-like multimers and translocate to the mitochondria. There, in concert with accessory proteins, Drp1 facilitates mitochondrial division [23]. A body of evidence has accumulated to suggest that Drp1 contributes to cell death [24–26]. Drp1 foci accumulate on mitochondria and mediate dramatic mitochondrial fission prior to caspase activation. Inhibiting Drp1 activity delays cytochrome C release, caspase activation, and subsequent steps in cell demolition [27]. In this study, the protein expression level of Drp1 in cultured NRK-52E cells was significantly increased under simulated ischemia injury with TNF-α stimulation and ATP depletion, whereas Nec-1 or Drp1-knock down treatment strongly abolished the elevation of Drp1 level induced by ischemia injury. Meanwhile, we also found that the cell injury induced by ischemia injury in NRK-52E cells was markedly improved after Drp1 knock down. These results indicated that Nec-1 protects renal tubular epithelial cell from ischemia injury, probably through a mechanism dependent on Drp1.
This new finding will support a notion that Nec-1, which was originally identified to selectively target the kinase activity of RIP1, can also mediate cell death through Drp1, a member of the dynamin family of GTPases required for mitochondrial fission. However, one fact we must admit is that, in the present study, we cannot rule out the probability of the presence of other molecular mechanisms on Nec-1 playing such a protective effect in this ischemia injury model. Especially, one recent study from Mohib et al. demonstrated that Indoleamine 2,3-dioxygenase (IDO), which is the rate-limiting enzyme in the kynurenine enzymatic pathway, is overexpressed in tubular epithelial cells subject to ischemia reperfusion injury, and IDO could promote ischemia-reperfusion injury by augmenting tubular cell death and worsening function [28]. Therefore, whether the presence of the inhibitory activity of Nec-1 against IDO is still unknown, and this will need to be clarified in further studies.

ATP depletion, an established model of renal ischemia, is induced by exposing cells to prewarmed glucose-free DMEM that contained the electron transport chain inhibitor antimycin A (10 μM) at 37 °C in the presence of 5% CO2, following previously described protocols [29,30]. Glucose removal was required in order to prevent cellular anaerobic glycolysis. Cells were subjected to 24 h of energy deprivation.

NRK-52E cells were seeded on sterile cover glasses placed in the six-well plates at a density of 1.0 × 104 cells cm−2 and cultured at 37 °C under different experimental treatments. Subsequently, cells were fixed, washed twice with PBS, and stained with Hoechst 33258 staining solution according to the manufacturer’s instructions (Beyotime, Jiangsu, China). Stained nuclei were observed under a confocal microscope (LCSM, Zeiss KS 400, Postfach, Germany).

NRK-52E cells under different experimental conditions were harvested for MTT assays (Nanjing KeyGEN Biotech. Co. Ltd., Nanjing, China) to determine the viable cell numbers, according to the manufacturer’s instructions. Briefly, approximately 5 × 103 cells were plated onto each well of a 96-well plate for 24 h, followed by different treatment as mentioned above. After incubation, 20 μL of MTT dye solution (5 mg/mL in PBS, pH 7.4) was added to wells containing 180 μL of growth medium. After 4 h of incubation at 37 °C, the medium was replaced with 200 μL of DMSO. After gently shaking at 37 °C for 10 min, MTT reduction was quantified spectrophotometrically at 570 nm using an Infinite M200 microplate reader. The assay was repeated six times. The cell viability was calculated as following: cell viability (%) = OD (experiment) − OD (blank)/OD (control) − OD (blank) × 100%.

After subjected to various treatments, NRK-52E cells were fixed with 4% paraformaldehyde at −20 °C for 20 min, and then were blocked with 5% BSA for 20 min at room temperature (RT) to block nonspecific binding. Then, the cells were incubated with Drp1 antibody (Cell Signaling Technology, Shanghai, China; 1:50) overnight at 4 °C. After three washes with PBS, cells were incubated with the goat anti rabbit IgG-PE (Santa Cruz, Dallas, TX, USA; 1:100) for 1 h at RT, and then double stained with 4′-6-diamidino-2-phenylindole (DAPI) for 5 min to visualize the nuclei. After washing, the slides were mounted with antifade mounting medium (Beyotime, Jiangsu, China). Photomicrographs were taken with confocal microscopy (LCSM, Zeiss KS 400, Postfach, Germany). All images were analyzed by two investigators blinded to the identity of the samples.

Cells under different experimental conditions were lysed with RIPA lysis buffer. The samples were centrifuged and the supernatants were collected as total cell extracts. Protein concentration was determined by the bicinchoninic acid (BCA) protein assay (Beyotime, Jiangsu, China). An aliquot of cell lysates containing 40 μg of protein were separated by sodium dodecyl sulfate (SDS)/polyacrylamide gel electrophoresis, and transferred to a polyvinylidene difluoride membrane (Immobilon-P, Millipore, MA, USA) by electroblotting. After blocking, the membranes then were incubated overnight at 4 °C with rabbit monoclonal antibody to Drp1. After washing, the secondary antibody was added and incubated 1 h at RT. Protein bands were visualized by ECL Plus Western Blotting Detection Reagents (Pluslight, Forevergen, Shanghai, China), and then exposed to X-ray film (Kodak, Rochester, NY, USA). The bands of the resulting autoradiographs were quantified densitometrically using Bandscan software (Version 5.0; Funglyn Biotech, Toronto, ON, Canada). Protein expression was quantified as the ratio of specific band to GAPDH.

Taken together, here, for the first time, we investigated the potential effects of Nec-1 on ischemia-injury in vitro cultured NRK-52E cells with TNF-α stimulation and ATP depletion. We found that Nec-1, identified as a specific inhibitor of RIP1, can effectively attenuate cell death induced by simulated ischemia injury in NRK-52E cells. In addition, we also demonstrated Nec-1 protect renal tubular epithelial cell from ischemia injury-induced cell death probably through decreased the expression of Drp1. 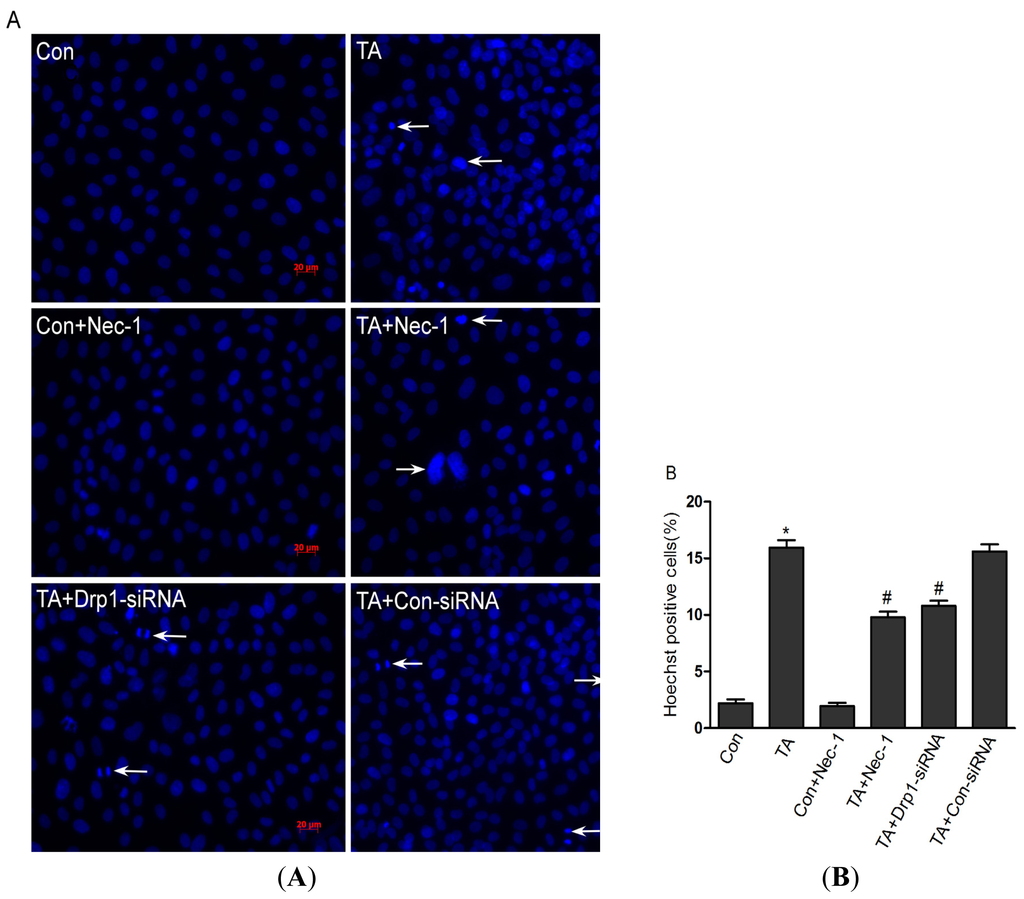 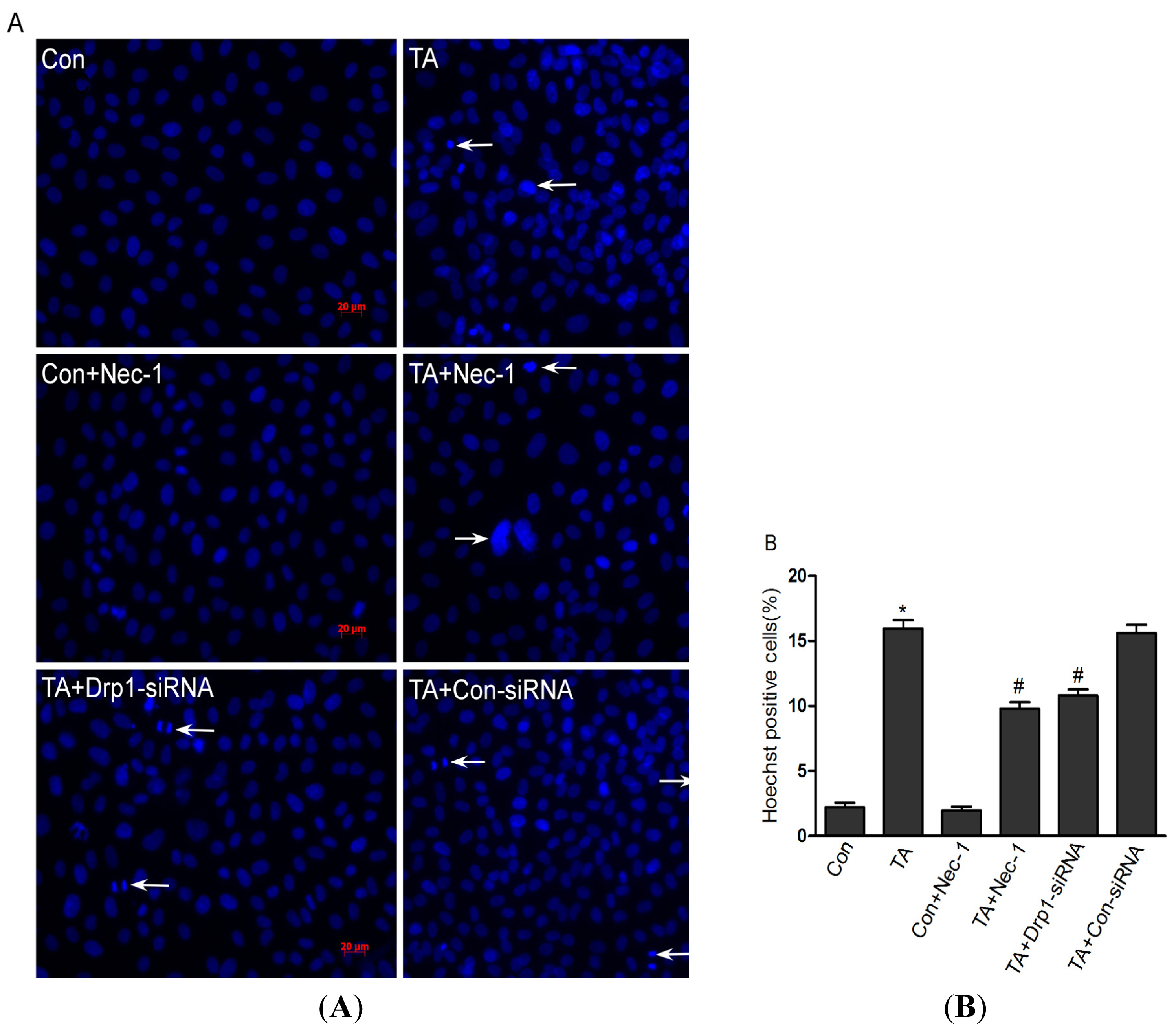 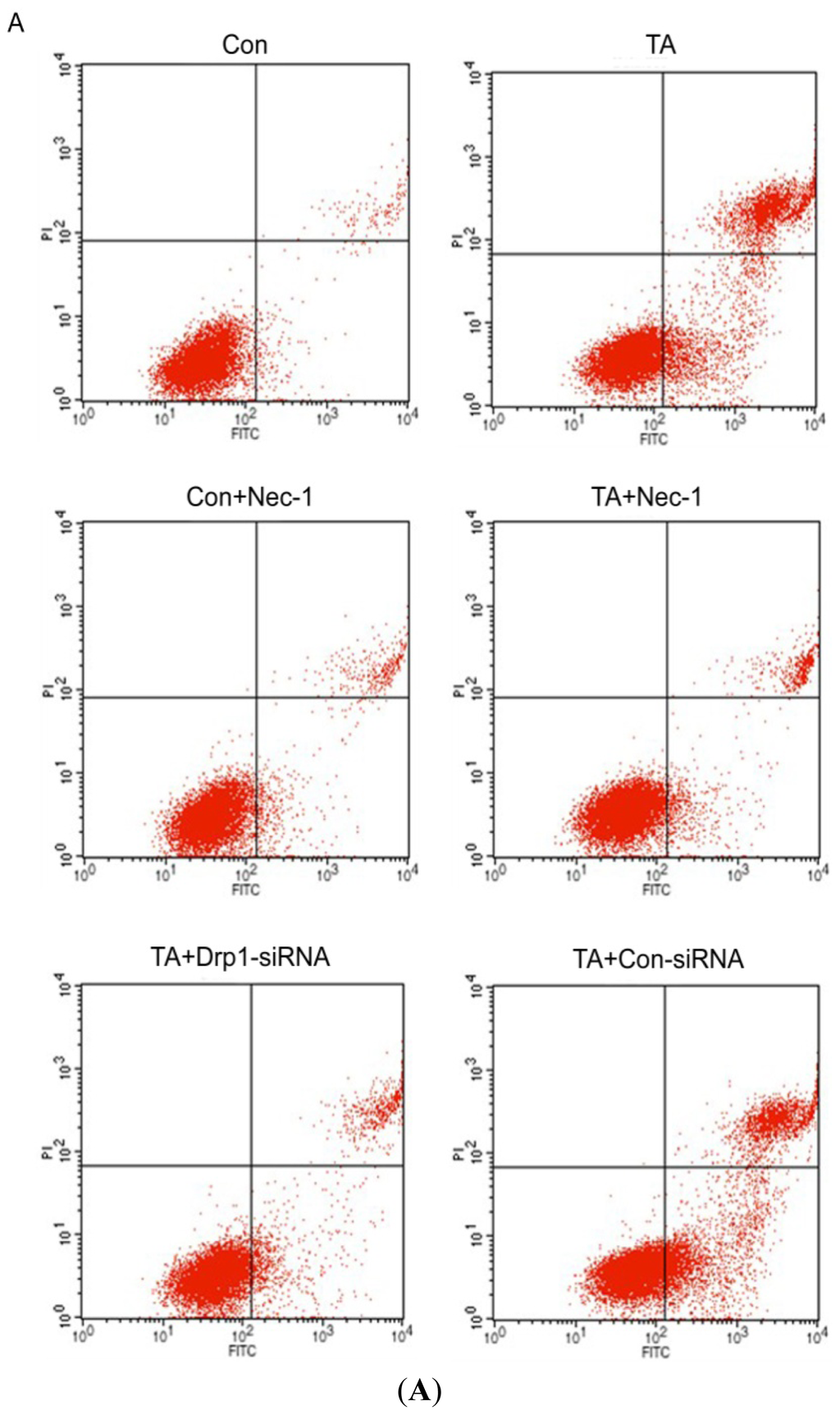 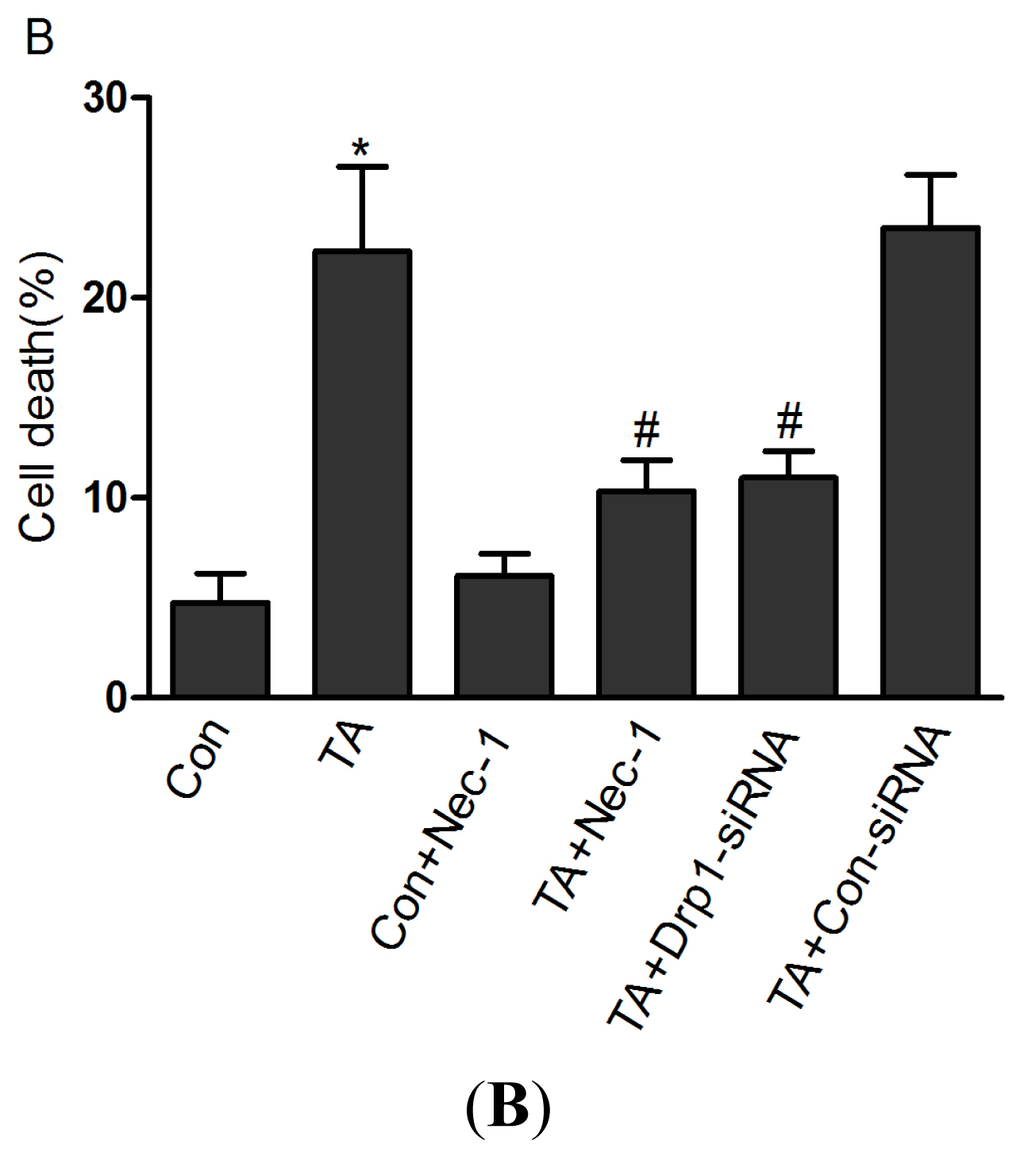 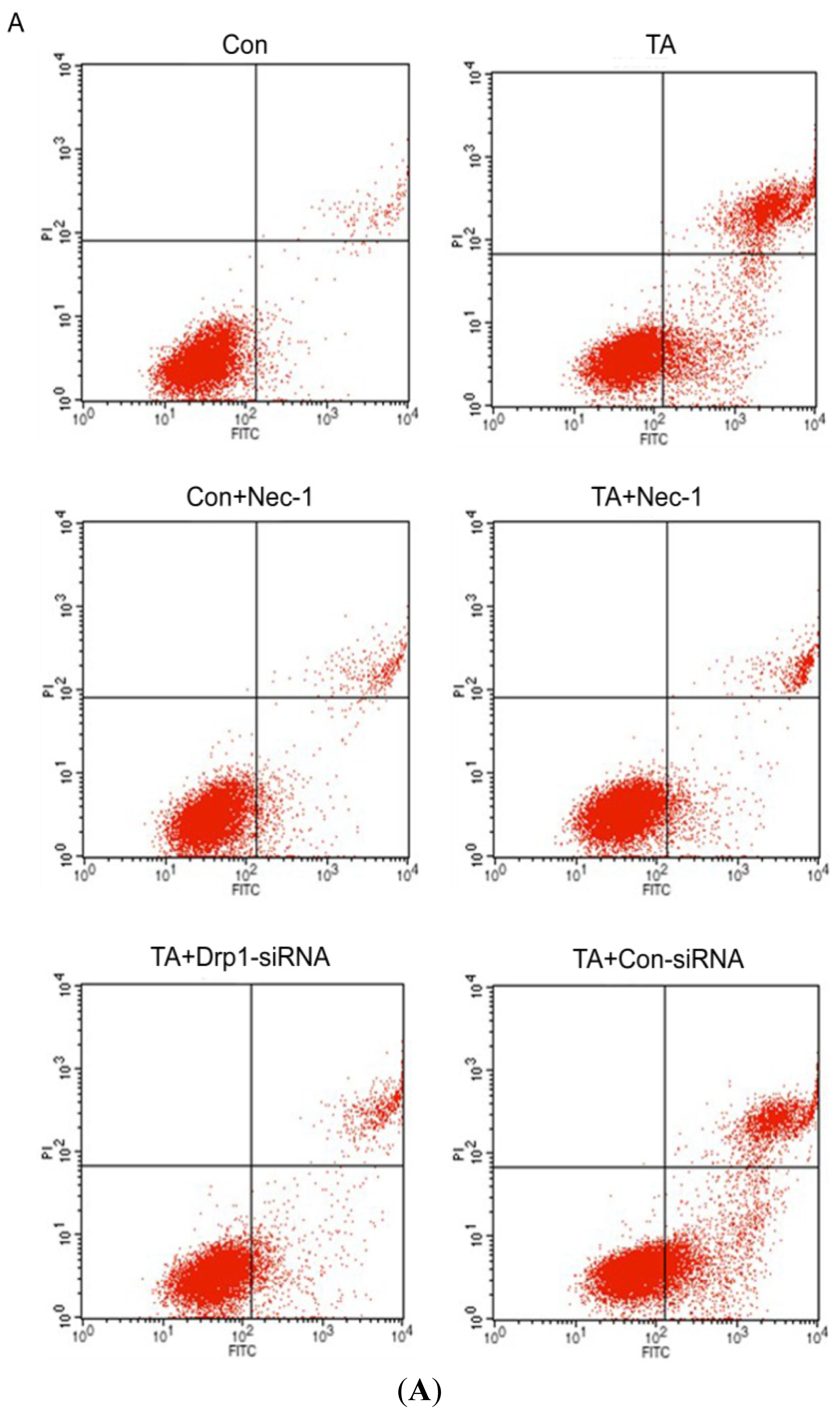 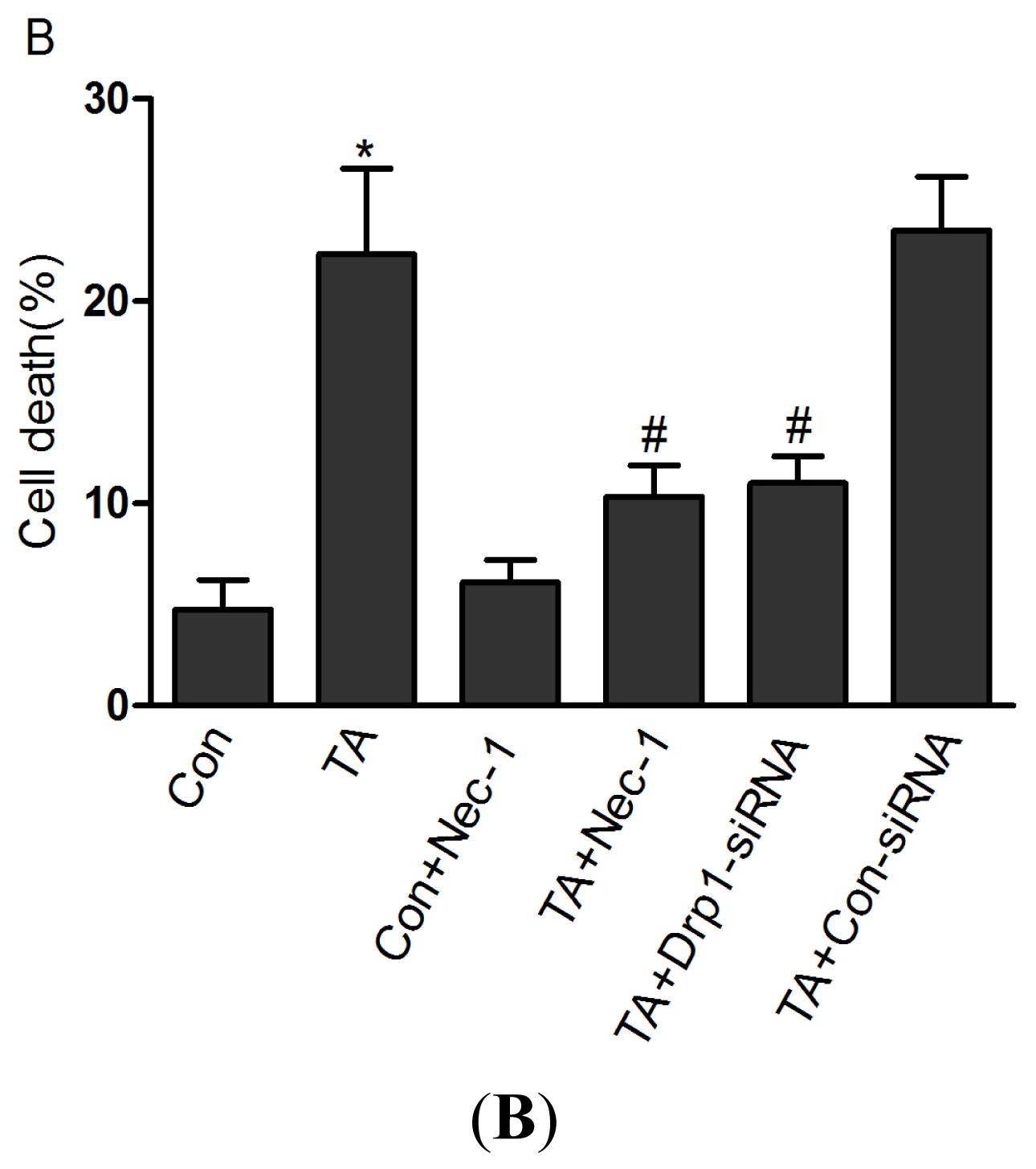 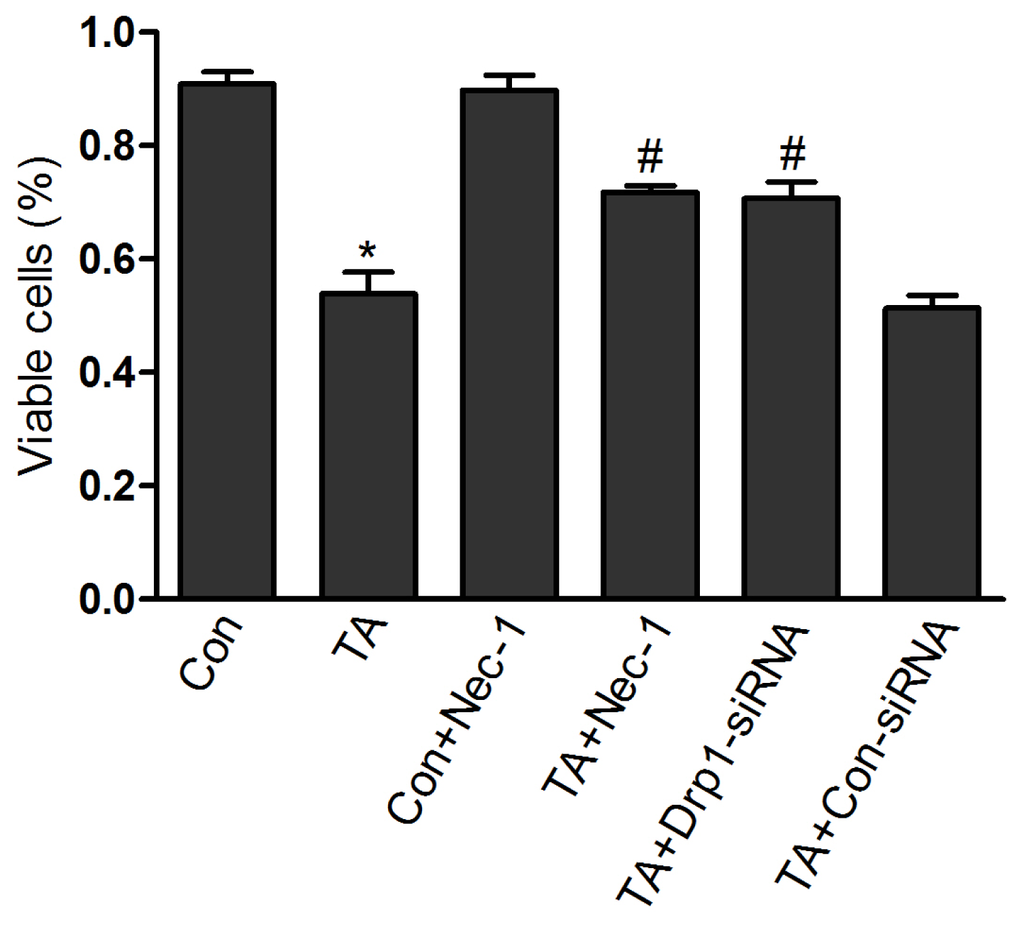 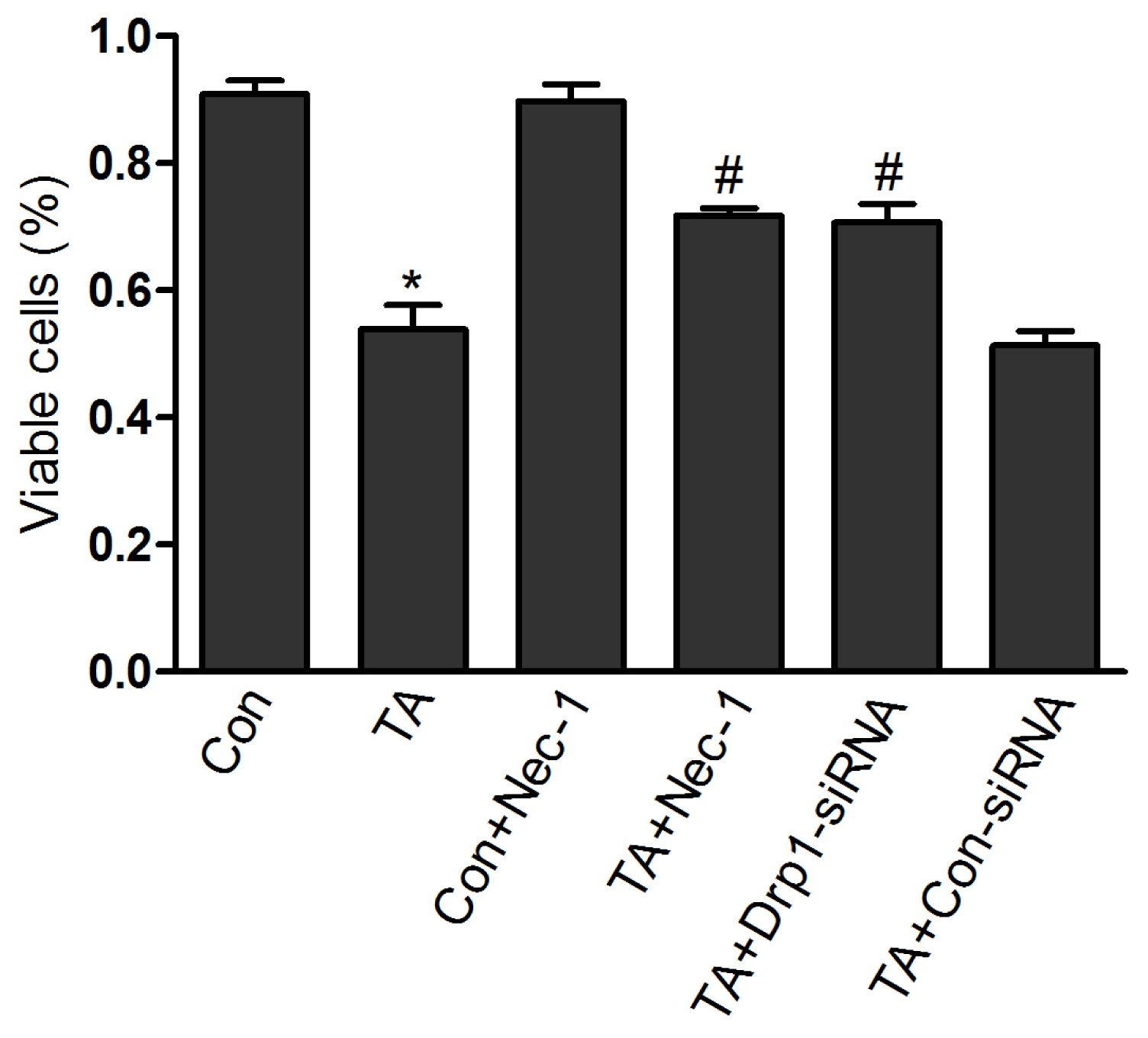 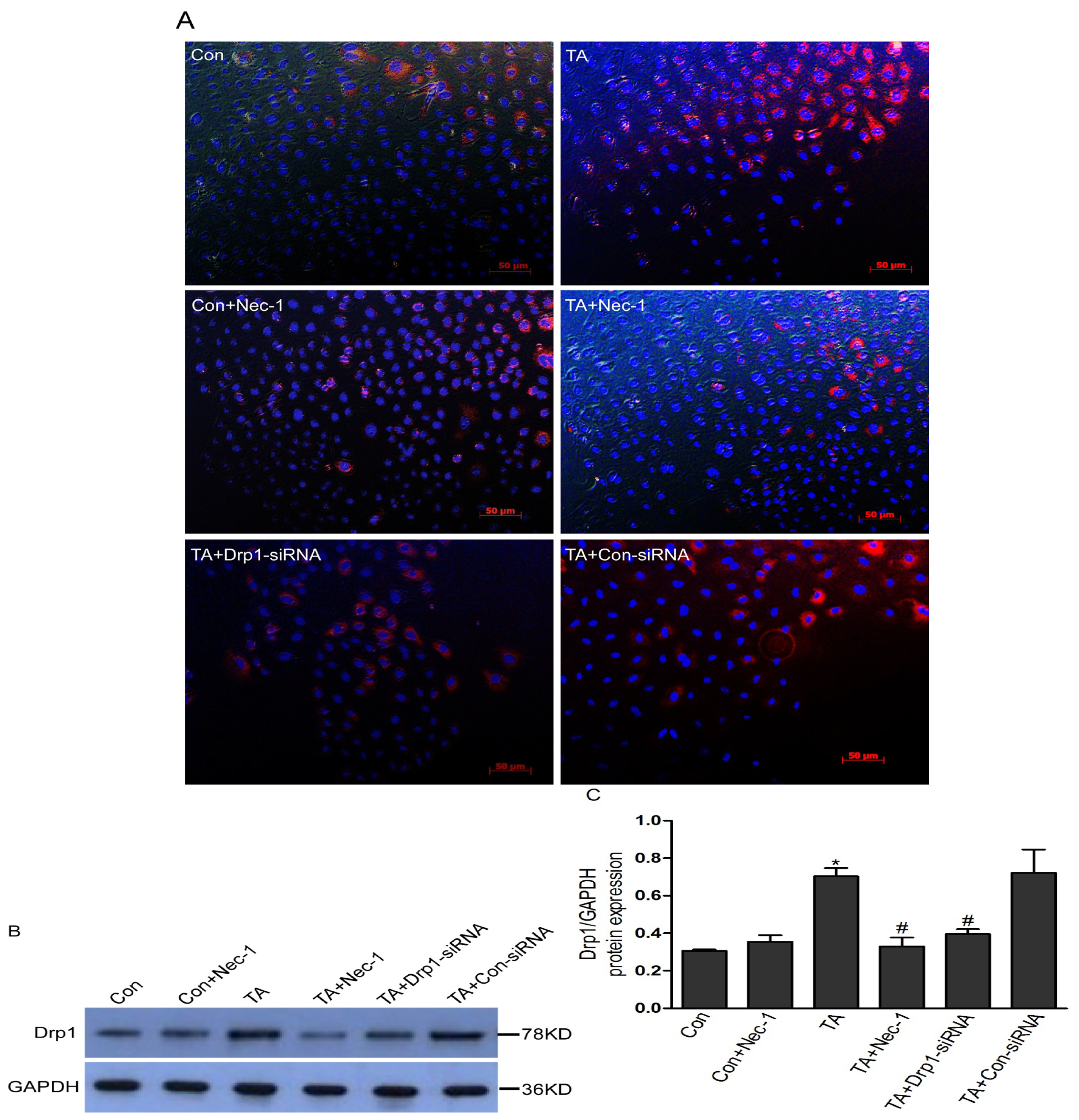