Toll-Like Receptor and Accessory Molecule mRNA Expression in Humans and Mice as Well as in Murine Autoimmunity, Transient Inflammation, and Progressive Fibrosis
Next Article in Special Issue

Tracking the Interplay between Bound Peptide and the Lid Domain of DnaK, Using Molecular Dynamics

Reinvestigation of the Oxidative Folding Pathways of Hen Egg White Lysozyme: Switching of the Major Pathways by Temperature Control

It has been well established that in the oxidative folding of hen egg white lysozyme (HEL), which has four SS linkages in the native state (N), three des intermediates, i.e., des[76–94], des[64–80], and des [6–127], are populated at 20 °C and N is dominantly formed by the oxidation of des[64–80] and des[6–127]. To elucidate the temperature effects, the oxidative folding pathways of HEL were reinvestigated at 5–45 °C in the presence of 2 M urea at pH 8.0 by using a selenoxide reagent, DHSox. When reduced HEL was reacted with 1–4 equivalents of DHSox, 1S, 2S, 3S, and 4S intermediate ensembles with 1–4 SS linkages, respectively, were produced within 1 min. After the oxidation, 3S was slowly converted to the des intermediates with formation of the native structures through SS rearrangement. At 5 °C, des[76–94] was populated in the largest amount, but the oxidation to N was slower than that of des[64–80] and des[6–127]. At 35 °C, on the other hand, des[64–80] and des[6–127] were no longer stable, and only des[76–94] was populated. The results suggested that the major folding pathways of HEL can be switched from one to the other by temperature control. View Full-Text
Keywords: lysozyme; oxidative protein folding; temperature effect; selenoxide; reduction pulse; oxidation pulse lysozyme; oxidative protein folding; temperature effect; selenoxide; reduction pulse; oxidation pulse
►▼ Show Figures 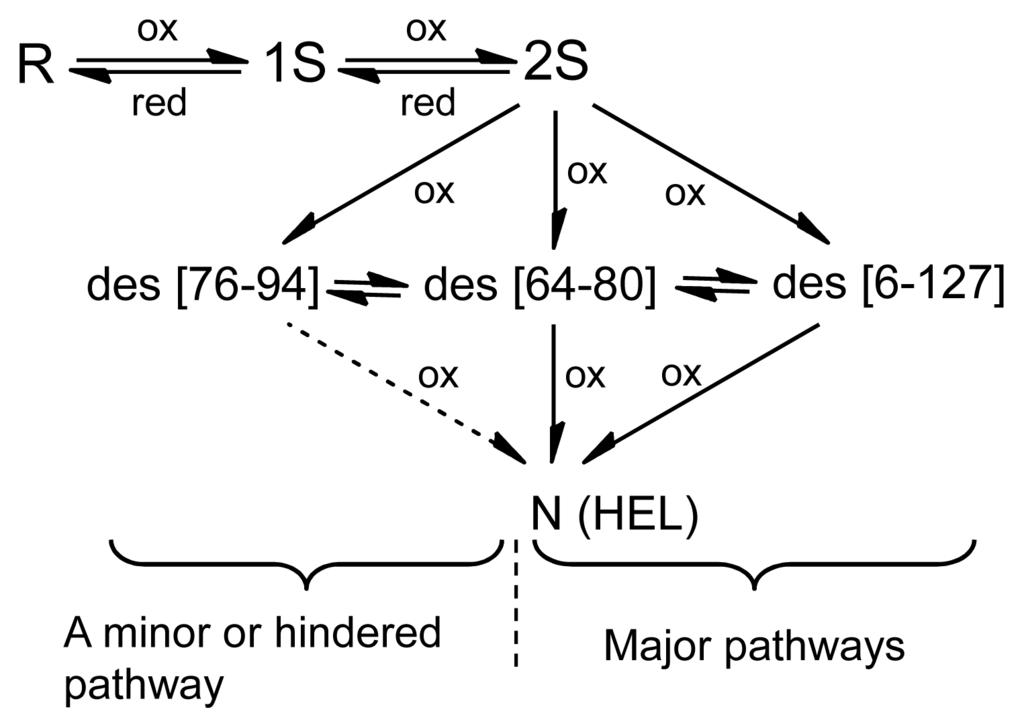