Misfolding and Amyloid Aggregation of Apomyoglobin

Apomyoglobin is an excellent example of a monomeric all α-helical globular protein whose folding pathway has been extensively studied and well characterized. Structural perturbation induced by denaturants or high temperature as well as amino acid substitution have been described to induce misfolding and, in some cases, aggregation. In this article, we review the molecular mechanism of the aggregation process through which a misfolded form of a mutated apomyoglobin aggregates at physiological pH and room temperature forming an amyloid fibril. The results are compared with data showing that either amyloid or aggregate formation occurs under particular denaturing conditions or upon cleavage of the residues corresponding to the C-terminal helix of apomyoglobin. The results are discussed in terms of the sequence regions that are more important than others in determining the amyloid aggregation process.
Keywords: apomyoglobin folding; apomyoglobin misfolding; amyloid aggregation apomyoglobin folding; apomyoglobin misfolding; amyloid aggregation

Proteins spontaneously fold from randomly unfolded conformations to biologically active structures in a hierarchical manner, with secondary structure preceding tertiary structure formation [53]. Secondary structure is primarily stabilized by hydrogen bonds between the amide groups of amino acids that are close in sequence [54,55], whereas tertiary structure is stabilized by hydrophobic interactions among side-chains of more distant segments of the chain [56,57]. This is supported by the observation that fluctuating elements of secondary structure often persist under denaturing conditions where the chain is disordered and devoid of specific tertiary interactions. Under physiological conditions, hydrophobic interactions among non-polar side-chains favor collapse of hydrogen-bonded secondary structure elements into a compact conformation [58]. In this respect, folding is usually envisaged as the convergence of an ensemble of disordered conformations, i.e., the unfolded state, toward lower-energy partially folded compact structures from which the biologically active protein is obtained [59].
Apomyoglobin, i.e., heme-free myoglobin, is a small, alpha-helical protein that contains two highly conserved tryptophanyl residues located at positions 7 and 14 in the N-terminal region of the molecule. The folding of this protein is known to proceed through compact intermediates that have been detected in both kinetic and equilibrium experiments [60–65]. In most of these intermediates, A, G, and H helices are folded and sterically oriented as in the native AGH subdomain, whereas the remainder of the molecule seems to be unordered (Figure 3). Uzawa et al. [66] presented evidence that the high level of helical structure in the earliest compact intermediate suggests the presence of helical regions outside the A, G, and H helix subdomain. Furthermore, the same authors supposed that the increases in helix content observed in the subsequent folding stages are probably due to an increase in the length of the pre-existing helices. The additional, secondary and tertiary structure modules are subsequently formed [67]. Once folding has occurred, the heme binds to the crevice formed essentially by E and F helices.

The increase in life expectancy has led to the emergence of a series of age-related disorders that pose novel challenges to modern society. Neurodegenerative disorders, including Alzheimer’s, Parkinson’s, and Amyotrophic Lateral Sclerosis are debilitating and so far incurable disorders that demand intensive research. In these diseases, misfolding, aggregation, and precipitation of proteins seems to be directly related to neurotoxicity. Environmental and genetic factors are known to be involved in amyloid aggregation process, but the mechanism by which it occurs is poorly understood. Although the W7FW14F apomyoglobin mutant is unrelated to any human disease, it is a suitable model for amyloid aggregation studies because it rapidly aggregates under physiological conditions (pH 7.0 at room temperature), forming oligomeric species that slowly convert into protofibrils and mature amyloid fibrils. The conversion of oligomeric species into mature amyloid fibrils is due to a conformational re-organization which results in the formation of the beta-cross structure. This involves not only the N-terminal region but also the molecular regions which form the binding site for the prosthetic group in the native globular state. The results reported in this review indicates that point mutations occurring in certain region of protein molecules may induce crucial perturbation of other, sterically related molecular regions, involving them in beta-cross structure formation. The identification of the molecular regions susceptible to amyloid aggregation is important both for rationalizing the effects of sequence changes on the protein aggregation and for the development of strategies targeted to combat diseases associated with amyloid formation. The accurate knowledge of the molecular mechanism through which amyloid is formed will certainly help to find molecules that are able to intercept the misfolded protein molecules thus preventing protein oligomerization. 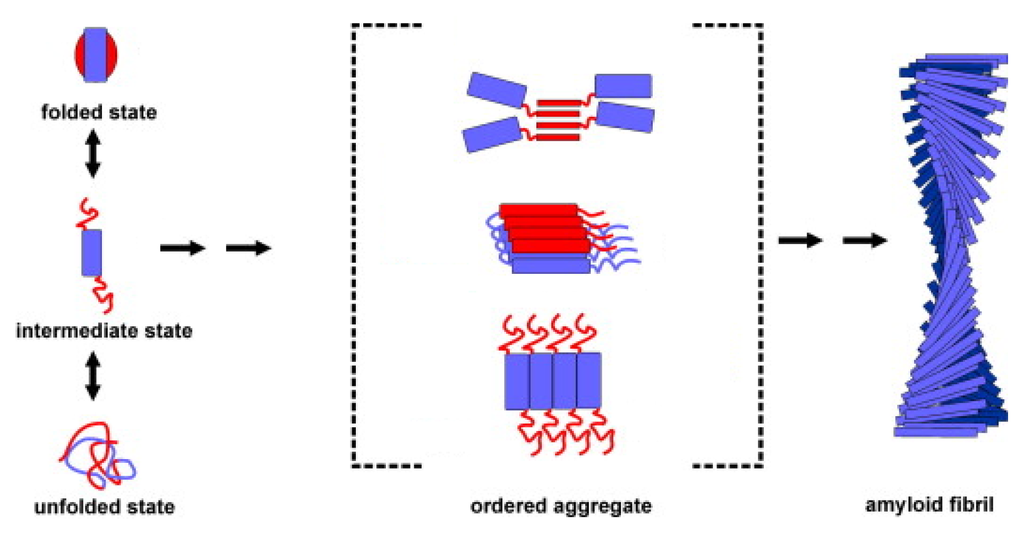 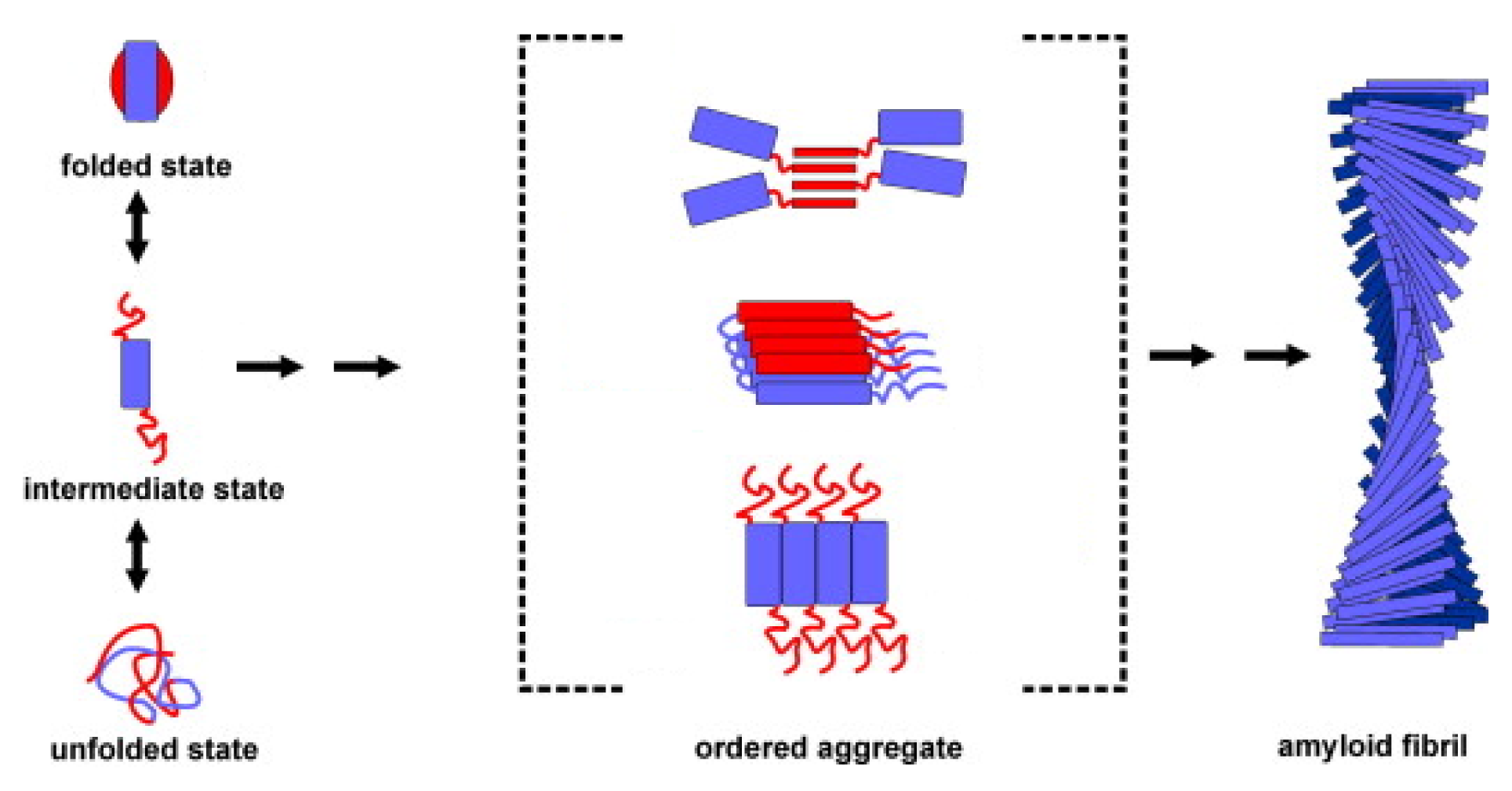 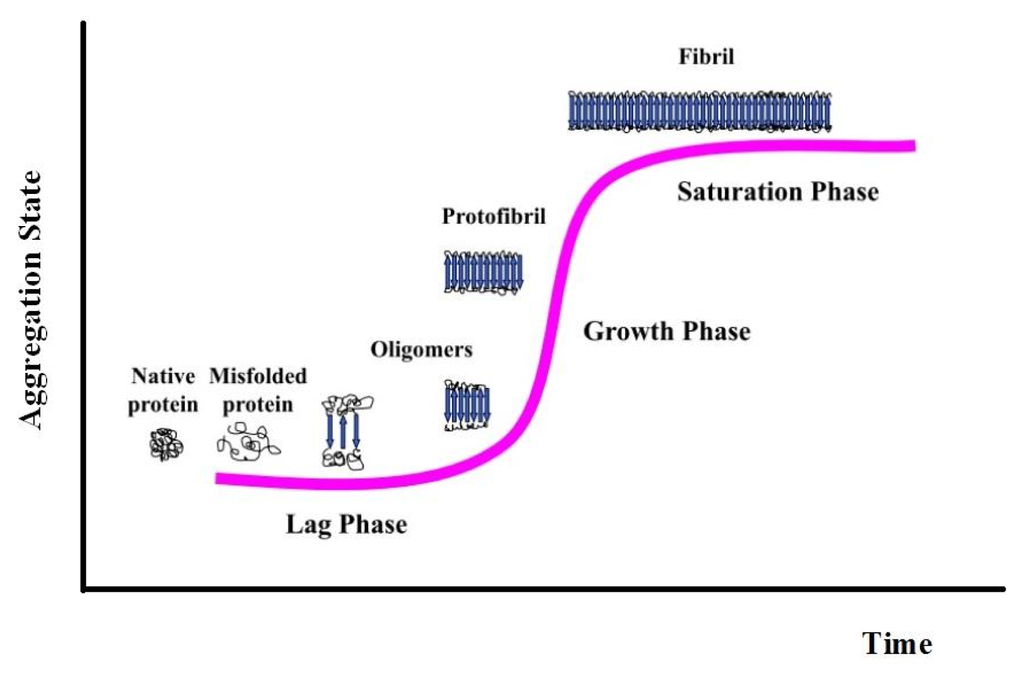 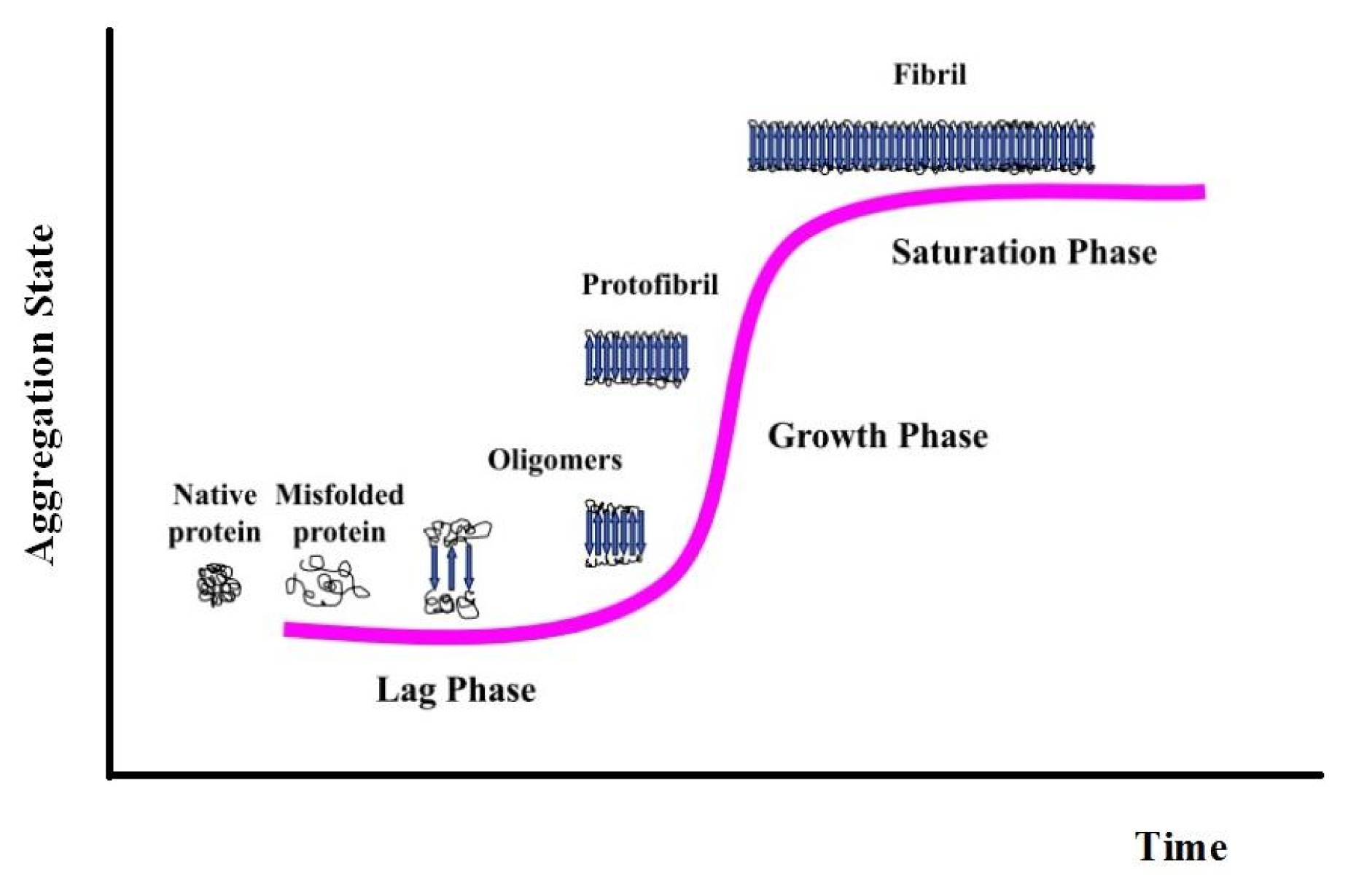 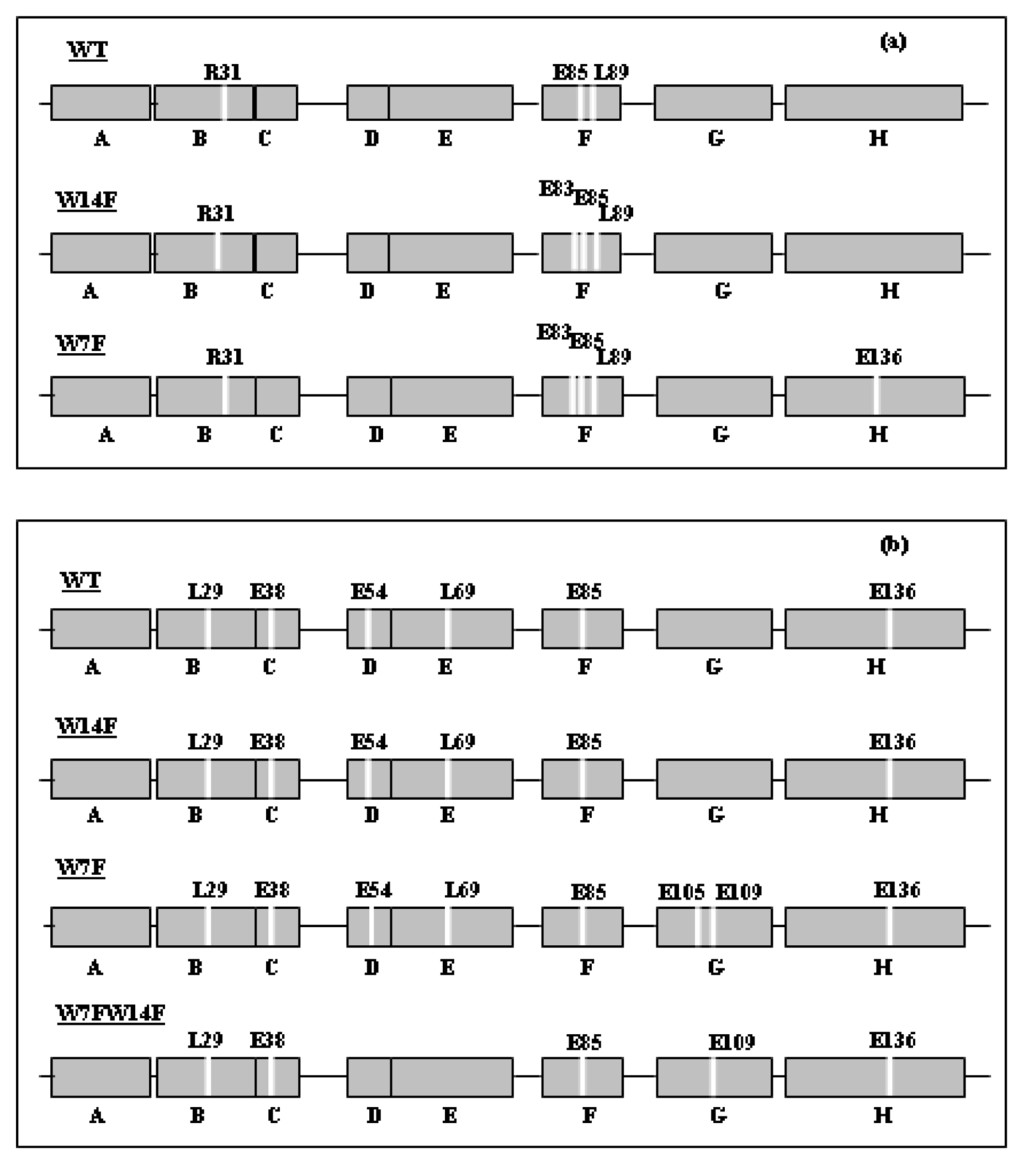 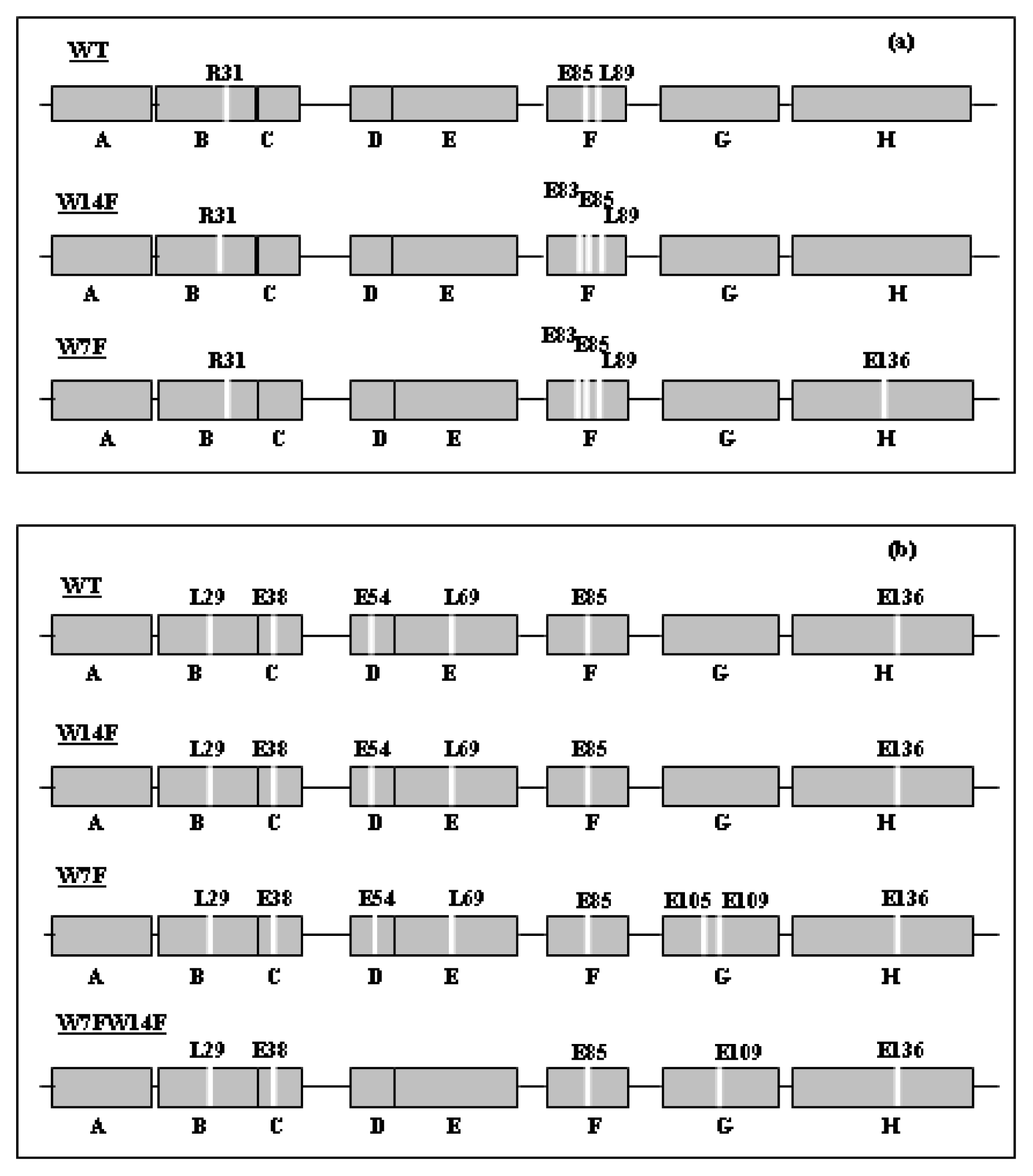 Table 1. Percent content of secondary structure of wild type and mutant apomyoglobin at neutral and acidic pH (Data from [73,74]).