Prion diseases or transmissible spongiform encephalopathies are a rare group of fatal neurodegenerative illnesses in humans and animals caused by misfolding of prion protein (PrP). Prion protein is a cell-surface glycosylphosphatidylinositol (GPI)-anchored glycoprotein expressed mostly in the central and peripheral nervous system, and this membrane-bound protein can be cleaved from the cell membranes by phosphoinositide phospholipase C. Numerous studies have investigated GPI-free recombinant PrP, but the role of GPI on misfolding of PrP is not well known. In this study, we synthesized a GPI analog that was covalently linking to a PrP S230C mutant, resulting in S230C-GPI. The structural changes in S230C-GPI upon binding to lipid vesicles composed of mixtures of the zwitterionic lipid (POPC) and the anionic lipid (POPG) were analyzed by circular dichroism spectroscopy, and the amyloid aggregation of S230C-GPI in the liberation from phospholipid vesicles was monitored by proteinase K-digestion assay. Our results indicate that S230C-GPI in the liberation of lipid vesicles has high tendency to misfold into amyloid fibrils, while the membrane-bound S230C-GPI proteins are highly stable and rarely convert into amyloid forms. In addition, the role of cholesterol in S230C-GPI was studied. The effect of GPI, cholesterol and phospholipid vesicles on misfolding of PrP is further discussed.
Keywords: GPI; cholesterol; phospholipids; misfolding; amyloid fibril; TEM GPI; cholesterol; phospholipids; misfolding; amyloid fibril; TEM

Prion diseases or transmissible spongiform encephalopathies (TSEs) are a rare group of fatal neurodegenerative illnesses in humans and animals. Some TSEs include Creutzfeldt–Jakob disease (CJD), Kuru, Gerstmann–Sträussler–Scheinker (GSS) syndrome, and fatal familial insomnia (FFI). Conversion of the native, predominantly α-helical conformation of prion protein (PrP, PrPC) into the β-stranded scrapie isoform of PrPC (PrPSc) is characteristic of TSEs. PrPSc potentially aggregates into amyloid fibrils having protease resistance.
PrPC is a cell-surface glycosylphosphatidylinositol (GPI)-anchored glycoprotein, expressed mostly in the central and peripheral nervous system [1]. Studies on the localization of PrP in neuroblastoma cells have indicated that both PrPC and PrPSc exist in lipid rafts [2], especially in caveolae [3]. Caveolae are cavelike invaginations of the cell surface enriched with caveolin, cholesterol, and negatively-charged sphingolipids [4]. Formation of PrPSc is inhibited when the GPI anchoring is inhibited by deletion or replacement of the C-terminal anchor region of PrPC [5,6]. GPI-anchored prion proteins can be cleaved from cell membranes by phosphoinositide phospholipase C (PI-PLC), but are inaccessible to PI-PLC digestion after structural conversion into PrPSc [7]. As these results suggest, caveolae provide a place not only for the GPI anchoring of PrPC but also a location for its subsequent conversion to PrPSc.
Caveolae are rich in cholesterol. Thus, the role of cholesterol in PrPc to PrPSc conversion is also of interest. It has been observed that formation of PrPSc is inhibited when caveolae are disrupted by cholesterol depletion [5]. The coat proteins of caveolae have a tight association with cholesterol to govern the biochemical behavior of caveolae and signal transduction [8]. Membranes composed of negatively-charged phospholipids are known to induce rapid formation of amyloid fibrils by various proteins [9,10]. However, in one study, the presence of cholesterol actually reduced the stability of the membrane-penetrant form of the amyloid β (Aβ) peptide [11], a peptide whose fibrillation has been implicated in Alzheimer’s disease.
Numerous works have studied GPI-free recombinant PrP. In scrapie-infected transgenic mice expressing anchorless prion protein, abnormal protease-resistant PrPSc is deposited significantly as amyloid plaque [12]. Anchorless recombinant prion proteins can proceed to PrPSc in both mouse [13] and cell free systems [14,15]. Recombinant prion protein consists of three α-helices and two antiparallel β-strands between residues 125 and 230 [16]. Partially unfolded recombinant PrP can potentially form β-sheet-rich PrPSc-like fibrils [17,18] that have resistance to proteinase K digestion and that are neurotoxic to transgenic mice [13]. However, the role of GPI on misfolding of PrP is less known. In one study, myristoylation at the C-terminus of the prion protein as a GPI anchor mimic indicated that the nonpolar substitution partially impairs amyloid fibril formation, but prion fibrils propagated from myristoylated prion proteins retain similar solvent accessibility [19].
It is important to investigate factors that can potentially affect the structural conversion from PrPC to PrPSc. In the present work, a model was developed based on a single point mutation from serine to cysteine in the C-terminal portion of prion protein that allowed for the introduction of a molecule with a long phospholipid chain. Using this model, we were able to obtain new insights on the structural effect of long phospholipid chains in the C-terminus of the prion protein.
In this study, a molecule containing characteristics of lipids, dubbed GPI analog, was synthesized (Figure 1a). The binding of GPI-analog to mouse PrP (MoPrP) S230C, which resulted in S230C-GPI, was studied with fluorescence and circular dichroism (CD) spectroscopy. The structural change of S230C-GPI upon binding to lipid vesicles composed of the zwitterionic lipid, 1-palmitoyl-2-oleoyl-sn-glycero-3-phosphocholine (POPC) and the anionic lipid, 1-palmitoyl-2-oleoyl-sn-glycero-3-phospho-1′-rac-1-glycerol (POPG), at a ratio of 3:1 was analyzed. In addition, the effect of cholesterol on MoPrP was investigated. The amyloid forms of S230C-GPI liberated from phospholipid vesicles were imaged by transmission electron microscopy (TEM) and analyzed.

Briefly, compounds 1 and 2 were mixed in acetic acid and heated to 170 °C for 6 h. Compound 3 was formed after returning the solution to the room temperature [38,39]. Subsequently, 1, 2-dimyristoyl-sn-glycero-3-phosphate (compound 4) was dissolved in pyridine and warmed to 35 °C and added with 2,4,6-triisopropylbenzenesulfonyl chloride. Reaction of compounds 3 and 4 at 35 °C for 4.5 h yielded compound 5 [40]. At the end of synthesis, the solvent was removed under reduced pressure and the crude product was purified by chromatography and identified by GC–MS.

Experimentally, the mixture of MoPrP and GPI analog at ratio of 1:3 was incubated in a cold room overnight. The S230C-bound, and free GPI analog, were separated by HPLC equipped with a reverse-phase C4 column (Waters) and eluted with gradient of water and acetonitrile. The formation of a covalent linkage between MoPrP S230C and GPI analog was confirmed by 16% Tricine SDS-PAGE [41].

In the preparation of SUV, 1-palmitoyl-2-oleoyl-sn-glycero-3-phosphocholine (POPC) and 1-palmitoyl-2-oleoyl-sn-glycero-3-phospho-1′-rac-1-glycerol (POPG) both purchased from Avanti Polar Lipids were preliminarily dissolved in chloroform. Mixture of POPC and POPG at the molar ratio of 3:1 was dried in a test tube. Subsequently, the lipids were dissolved with distilled water and sonicated at 40 °C for 40 min. The sonicated solution was quickly frozen with liquid nitrogen for 20 min, and then heated to 40 °C for 20 min. This freezing and heating cycle was repeated 5 times. Finally, the lipids were sonicated for 20 min followed by centrifugation at 12,000 rpm in eppendorf tubes. The desired SUV was populated in the supernatant. The radius of SUV was about 10 nm as determined by dynamic light scattering (Nano Zeta, Malvern, UK).

GPI and cholesterol solutions were titrated into 10 μM MoPrP S230C and WT, respectively, in 50 mM MES buffer (pH 6.0). The spectra of tryptophan residues in the proteins upon each titration were collected by Hitachi F-4500 fluorometer with excitation wavelength at 280 nm. The fluorescence intensity at 350 nm was recorded for further analysis.

CD spectra of MoPrP samples were recorded with a Jasco J-815 spectrometer. For measurements in the far-UV region, a quartz cell with a path length of 0.1 cm was used in nitrogen atmosphere. For protein samples, the concentration was kept constant at 10 μM in 20 mM MES (pH 6.0). An accumulation of five scans, with a scan speed of 50 nm per minute, was performed at 20 °C. The heat-induced denaturation of proteins was conducted with heating protein solutions at the rate of 1 °C/min, and the ellipticity at 222 nm was collected every 0.5 °C.

For fibril conversion, proteins were added into 50 mM MES (pH 6) in the absence or in the presence of 2 M GdnHCl. The samples were incubated at 37 °C, as described in previous studies on protein fibrillation [17,18]. When the ThT fluorescence reading reached the steady state, the fibril samples were dialyzed with H2O for further experiments.

The fibril samples were stained with 2% tungsten phosphoric acid onto carbon-coated 200-mesh copper grids. The samples were adsorbed onto the copper grids for 30 s and subsequently washed with PBS and H2O twice. The samples were air-dried overnight before imaging. The TEM images were collected by a Joel JEM-2100 TEM. The analysis of fibril length was carried out on WICF ImageJ software (National Institutes of Health, Bethesda, MA, USA).

The amyloid fibrils (10 μM) were dialyzed and treated with PK (0.2 μM) at 37 °C for 1 h in 100 mM Tris–HCl buffer (pH 7.2). This PK-digestion was stopped by addition of urea to a final concentration of 2.25 M. Samples were heated at 95 °C for 10 min and analyzed by 12.5% SDS-PAGE followed by analysis with silver staining. In addition to the silver staining, aliquots of PK-treated samples were analyzed with mass spectroscopy for precise molecular weight.

GPI-anchoring on lipid vesicles keeps PrP in native structure and with normal function. Liberation of PrP from membrane surface potentially converts normal PrPC into disease-related amyloid form, PrPSc. Enhancement of linking PrP on the membrane domain can be a direction to develop approaches to prevent and to alleviate TSE.

We are thankful to National Science Council for financial support (Projects 96-2113-M-194-014-MY2 and 101-2321-B-194-001) and Wan-Ching Shieh in Department of Chemistry at National Chia-Yi University for TEM imaging. We also thank Raymond Chung for editing the manuscript. 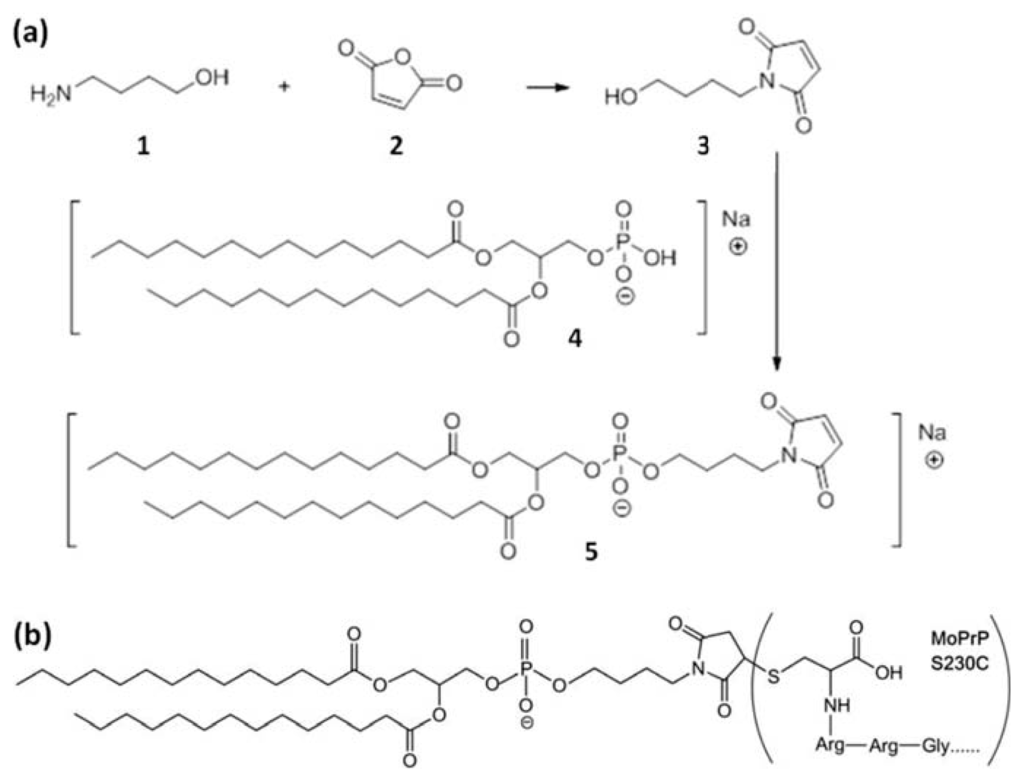 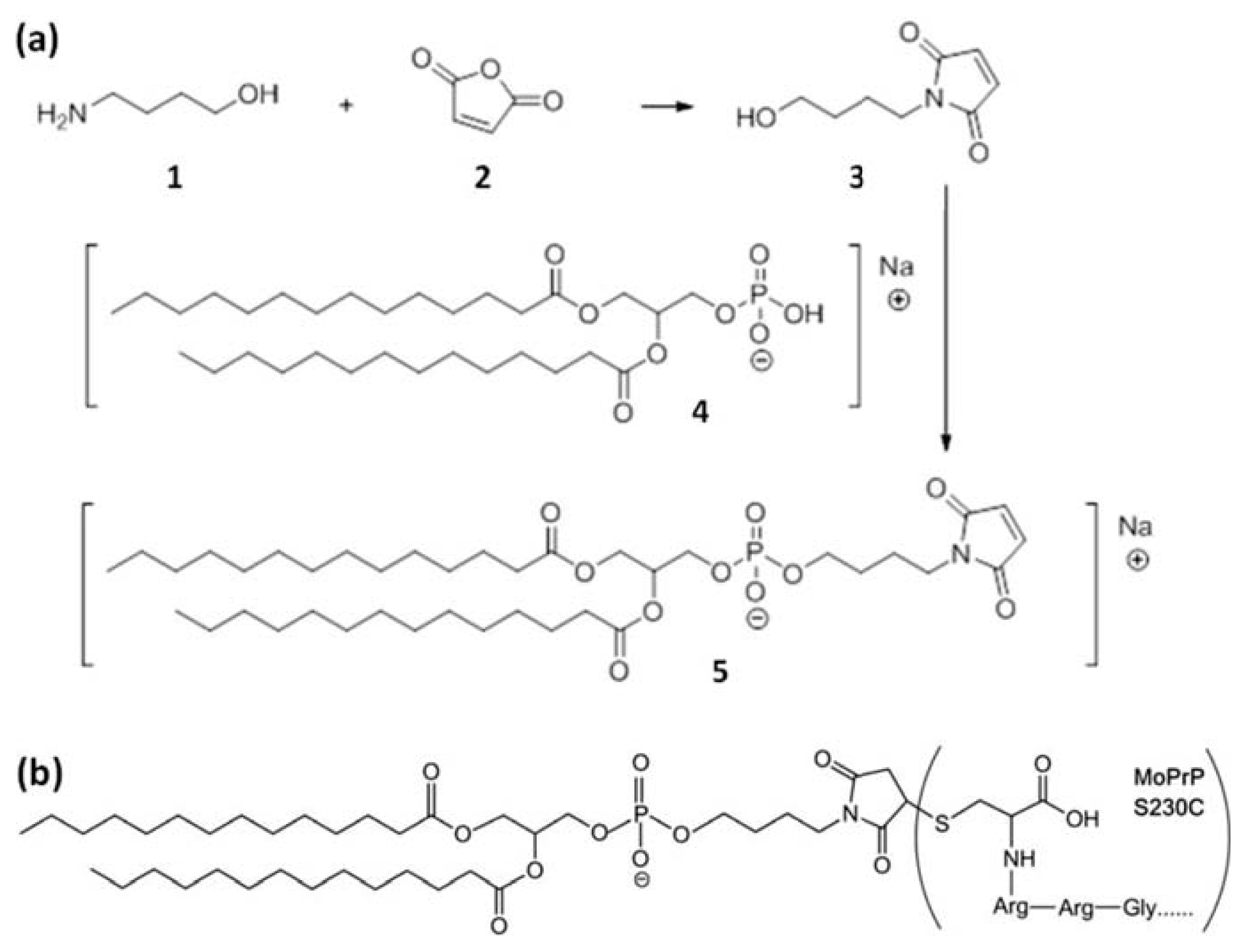 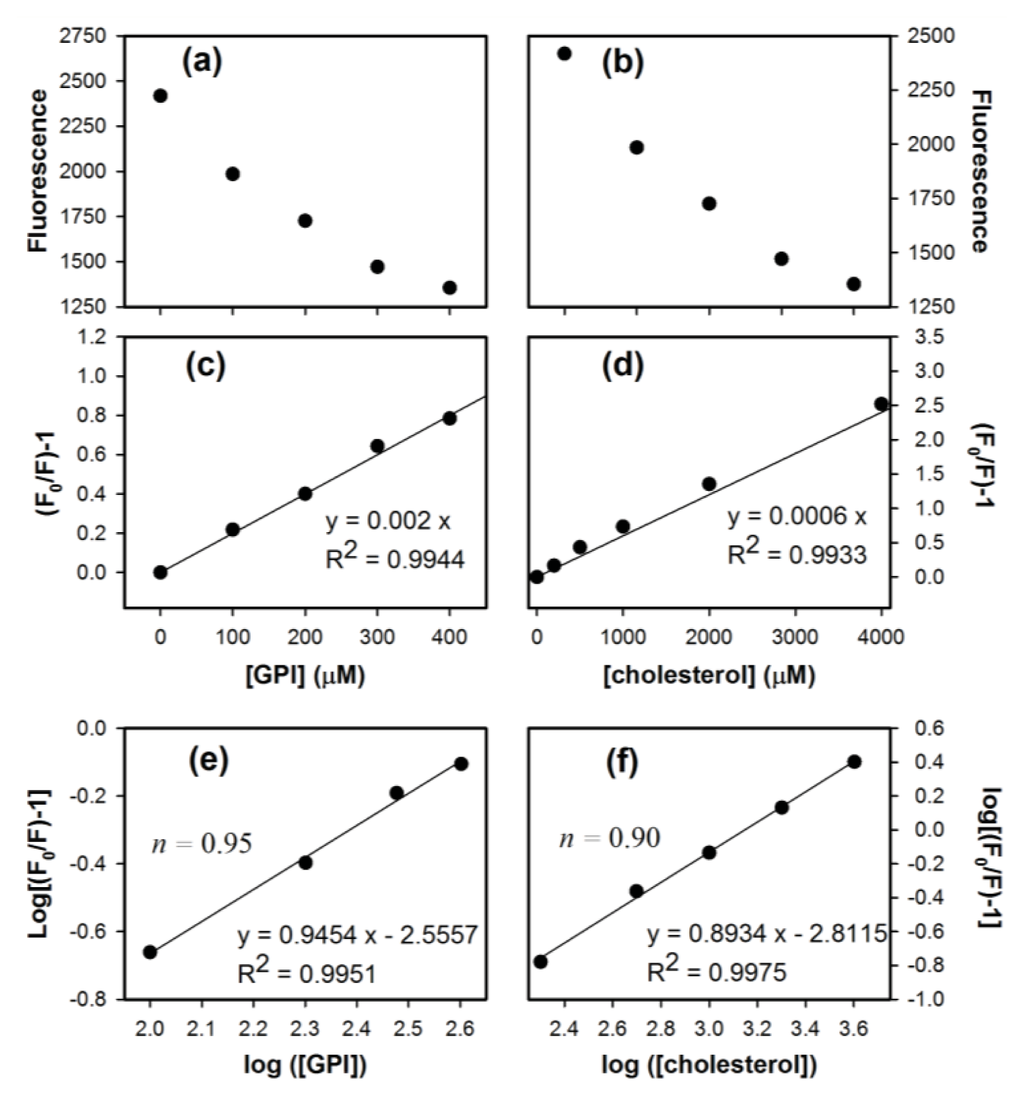 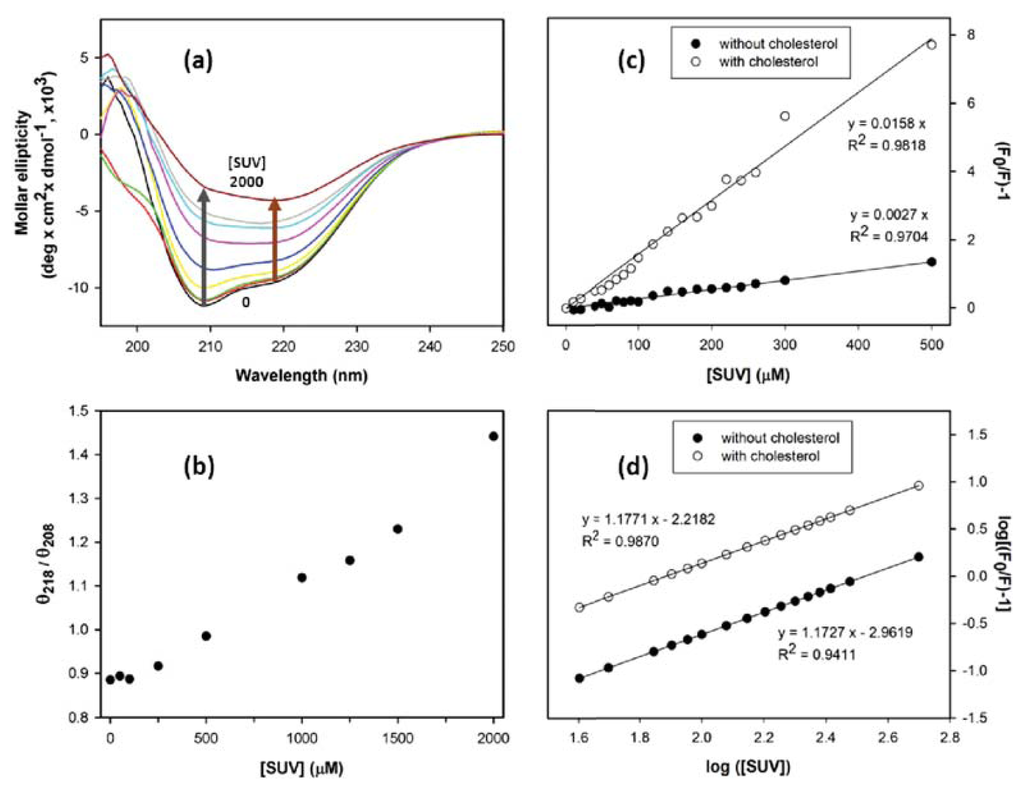 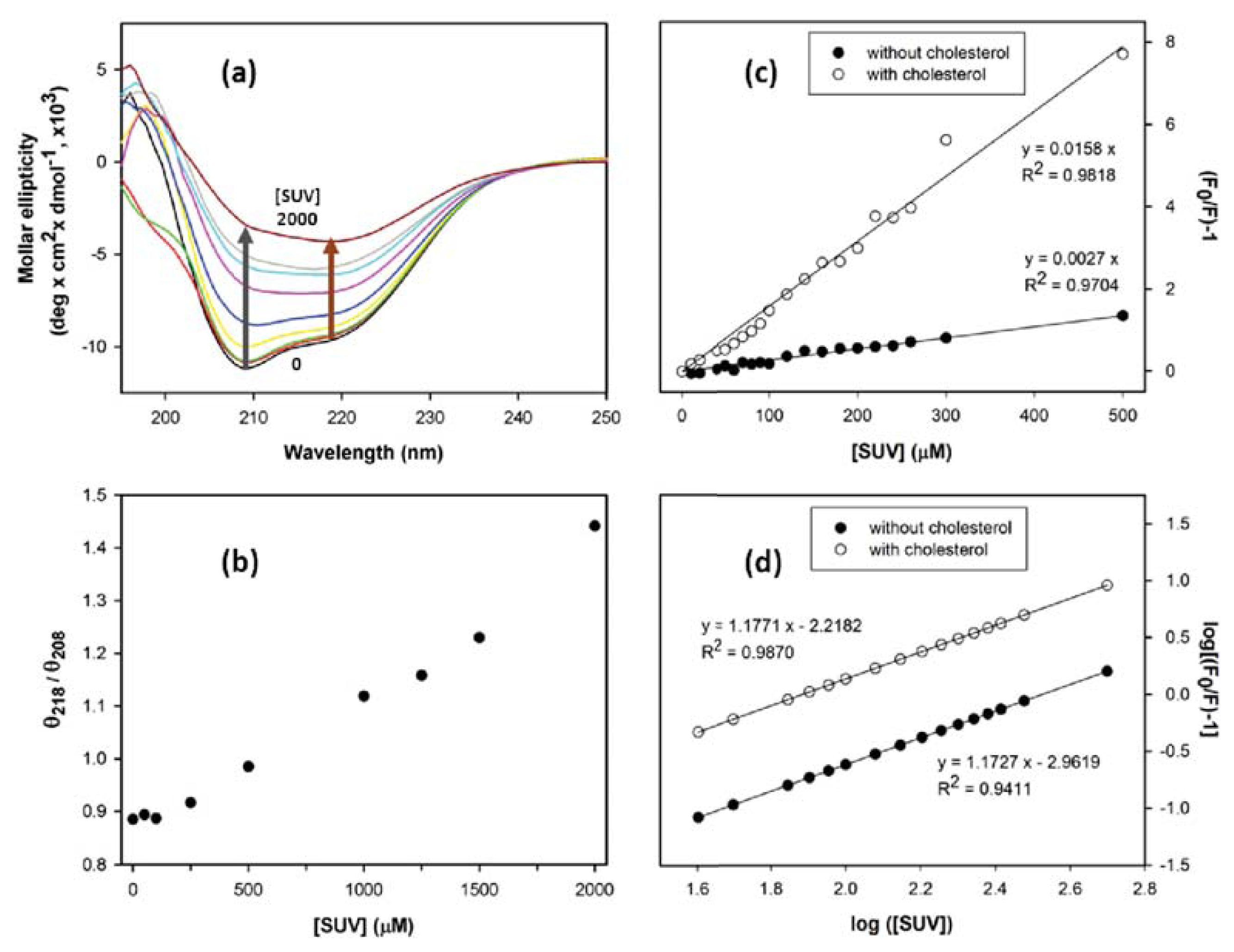 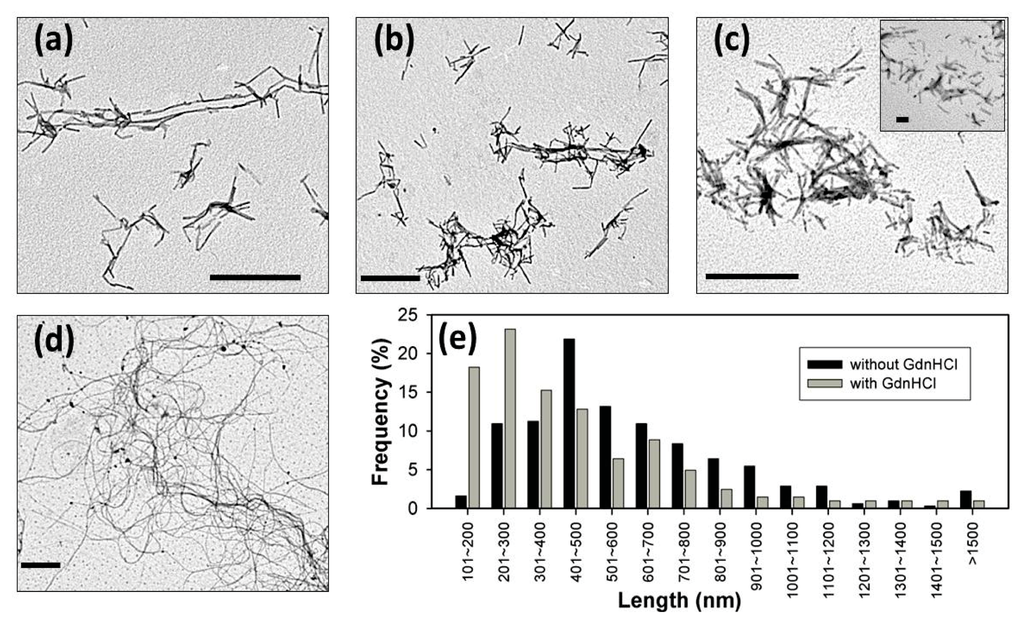 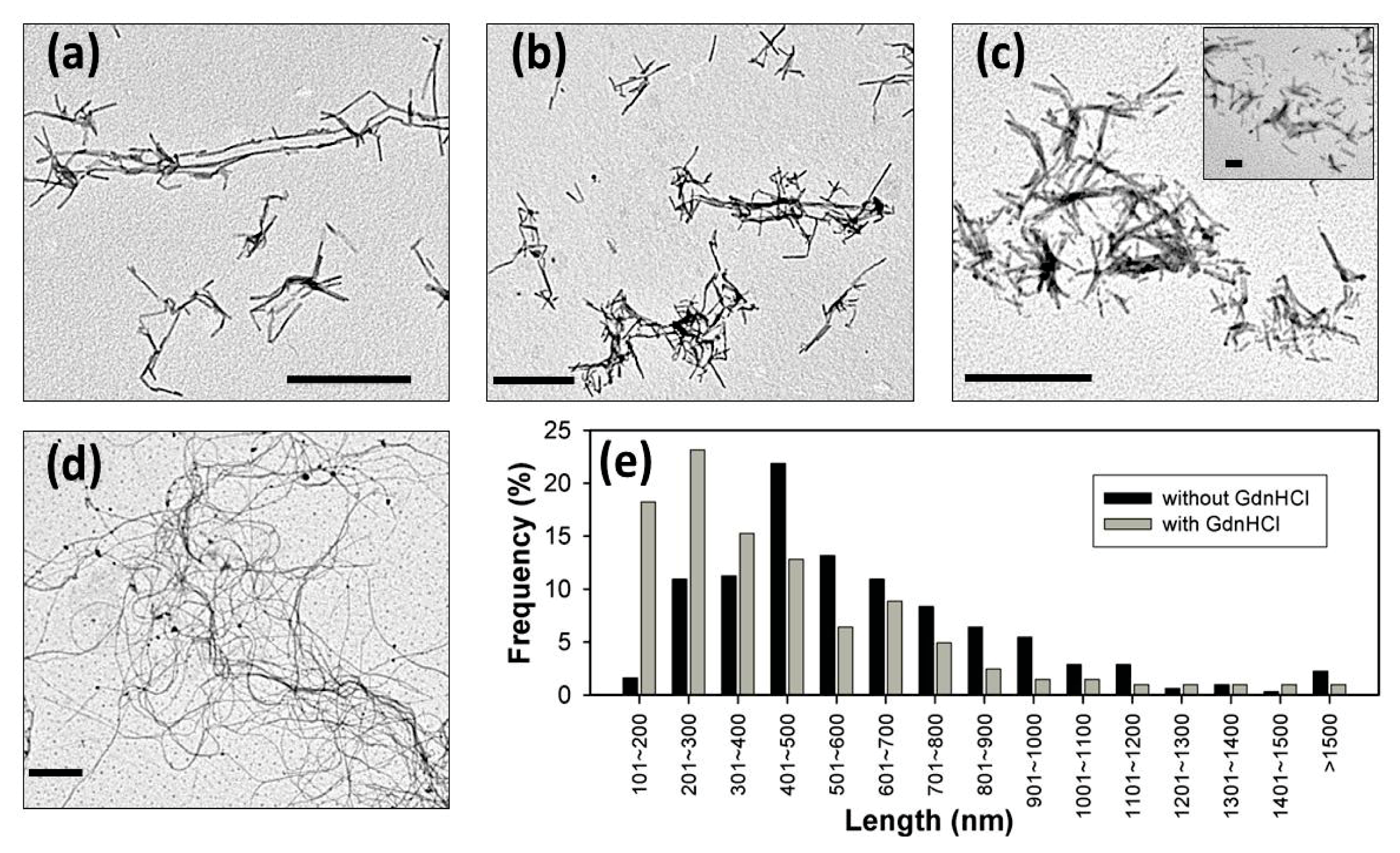 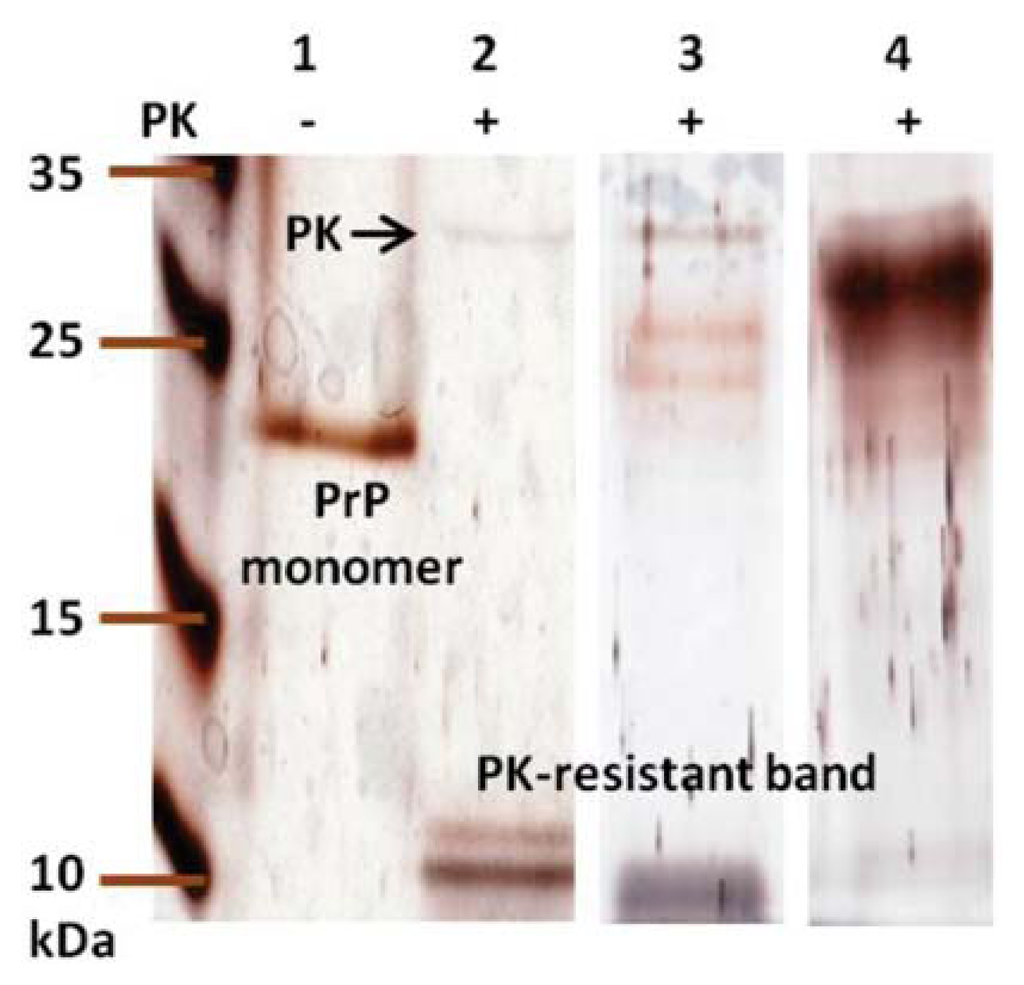 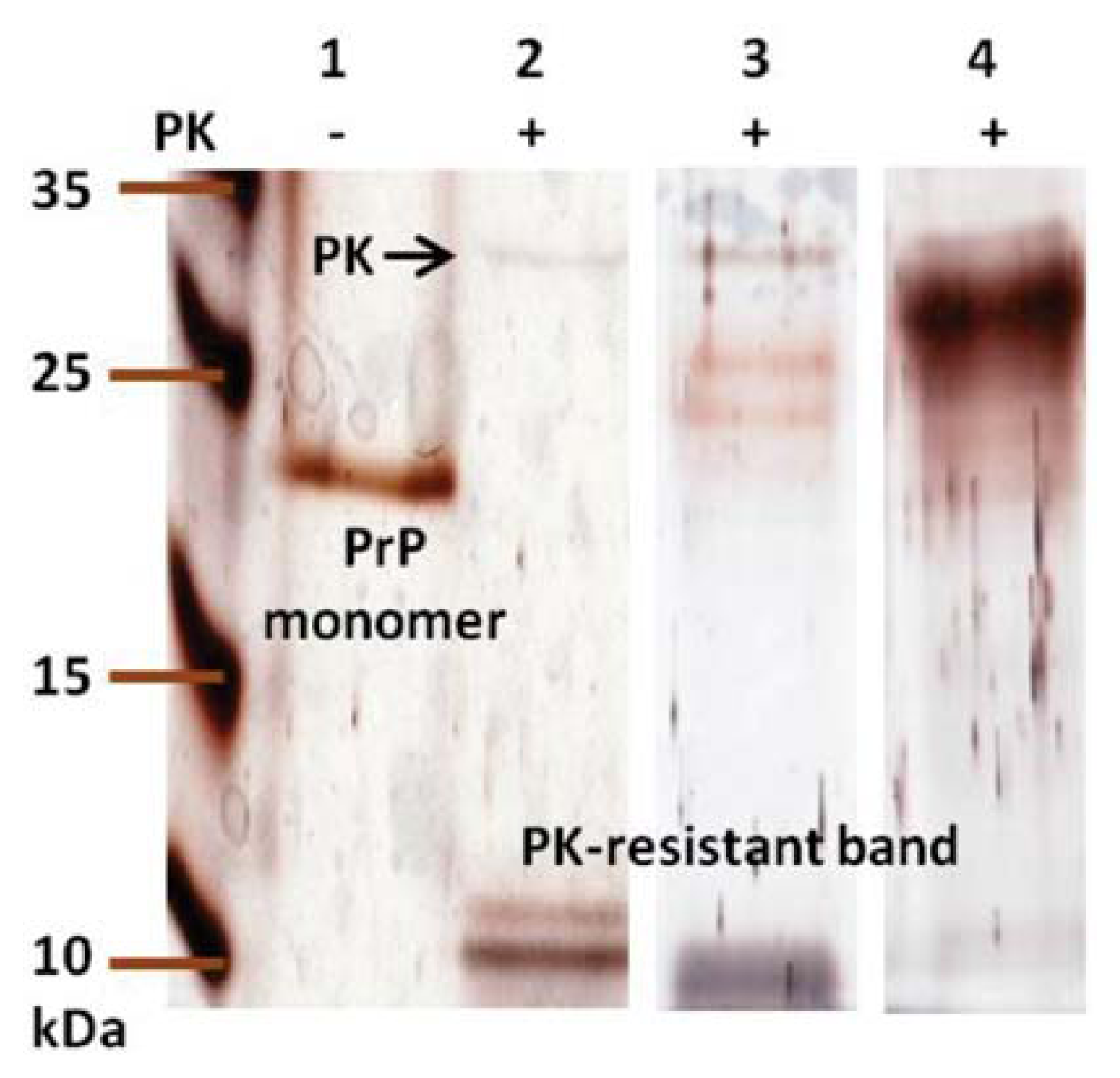