The International Service for the Acquisition of Agri-biotech Applications (ISAAA) estimates that millions of farmers cultivated genetically modified (GM) crops over more than 170 million hectares across 27 countries in 2013; the major GM crop species were canola, maize, cotton, and soybean [1]. Due to the constant emergence of new GM crops and their derivatives, consumers are becoming increasingly concerned regarding risks posed by GM crops and products. To protect the consumers’ right to be informed and choose options, many countries have implemented a labeling policy for foods derived from genetically modified organisms (GMOs).
GMO detection is required to implement such an identification system. DNA-based GMO detection methods can be classified as screening, gene-specific, construct-specific, and event-specific detection according to their level of specificity [2]. Screening tests detect exogenous transgenic regulatory elements to determine whether products contain transgenic ingredients. Screening detection is one of the most economical detection methods and also acts as a basis for further GMO identity verification. Although the polymerase chain reaction (PCR) is one of the most widely used amplification methods for GMO screening detection [3], the need for delicate equipment and complicated procedures limit the use of PCR amplification in point-of-use and field settings. Rapid, specific, and highly effective methods for identifying the presence of GMOs in food and feed are important and necessary [4].
Recombinase polymerase amplification (RPA) offers a portable, rapid, and highly specific isothermal alternative to PCR and is ideally suited to point-of-use molecular assays for GMO detection. This technique can be combined with a fluorescent probe for real-time detection, and assays can be completed in a short period of time (within 30 min) at a constant temperature (37–42 °C) by simulating in vivo DNA recombination. In the RPA platform, the phage-derived recombinase initially aggregates with the primers and forms nucleoprotein filaments. Then, the filaments scan the template DNA for homologous sequences and catalyze strand exchange at cognate sites [5]. The displaced strand is bound by a single-stranded DNA binding protein, and the primers then are extended by Bsu DNA polymerase. Like PCR, this process amplifies DNA exponentially. The DNA repair enzyme exonuclease III is included in the RPA reaction to cleave the probe that is hybridized to the amplicon, thereby separating the fluorophore and the quencher and generating a real-time readout [6]. The use of fluorescent probes provides a convenient method for monitoring amplification events in the RPA reaction. Real-time RPA also has been developed and used for the molecular detection of microorganisms and viruses, such as Cryptosporidium [7], Francisella tularensis [8], Rift Valley fever virus (RVFV) [9], HIV-1 [10], and other pathogens.
The most frequently used method for detecting GMO material is screening for the CaMV-35S promoter (P-35S) from the cauliflower mosaic virus (CaMV) and the 3' non-translated region of the nopaline synthase gene (T-nos) from Agrobacterium tumefaciens [11]. In this work, we describe the initial development of a real-time RPA assay to detect P-35S and T-nos sequences for purposes of GMO screening and detection.

2.2. Sensitivity of the RPA Assays

To investigate the sensitivity of the developed RPA assays, 47.5 ng/µL genomic DNA isolated from the GM rice (Kefeng 6) was serially diluted with 47.5 ng/µL non-GM rice DNA. The concentration of positive genomic DNA was 10,000, 2000, 500, 100, and 50 copies/µL at each dilution. In each reaction, 1 µL of diluted DNA solution was used as the template, and 6 replicates per dilution were analyzed. Both of the RPA assays displayed a sensitivity of 100 to 50 detected molecules (Figure 1) and reliably detected 100 copies (Table 3). The probit regression predicted that the P-35S and T-nos RPA assays can detect 86.0 and 124.6 copies in 95% of cases, respectively. The mean R2 coefficient was 0.94 for the P-35S detection method and 0.92 for the T-nos detection method (Figure 2), and the slopes of the regression lines were less than the minimum acceptable value of 0.98. Thus, the real-time RPA method is more suitable for qualitative, rather than quantitative detection. 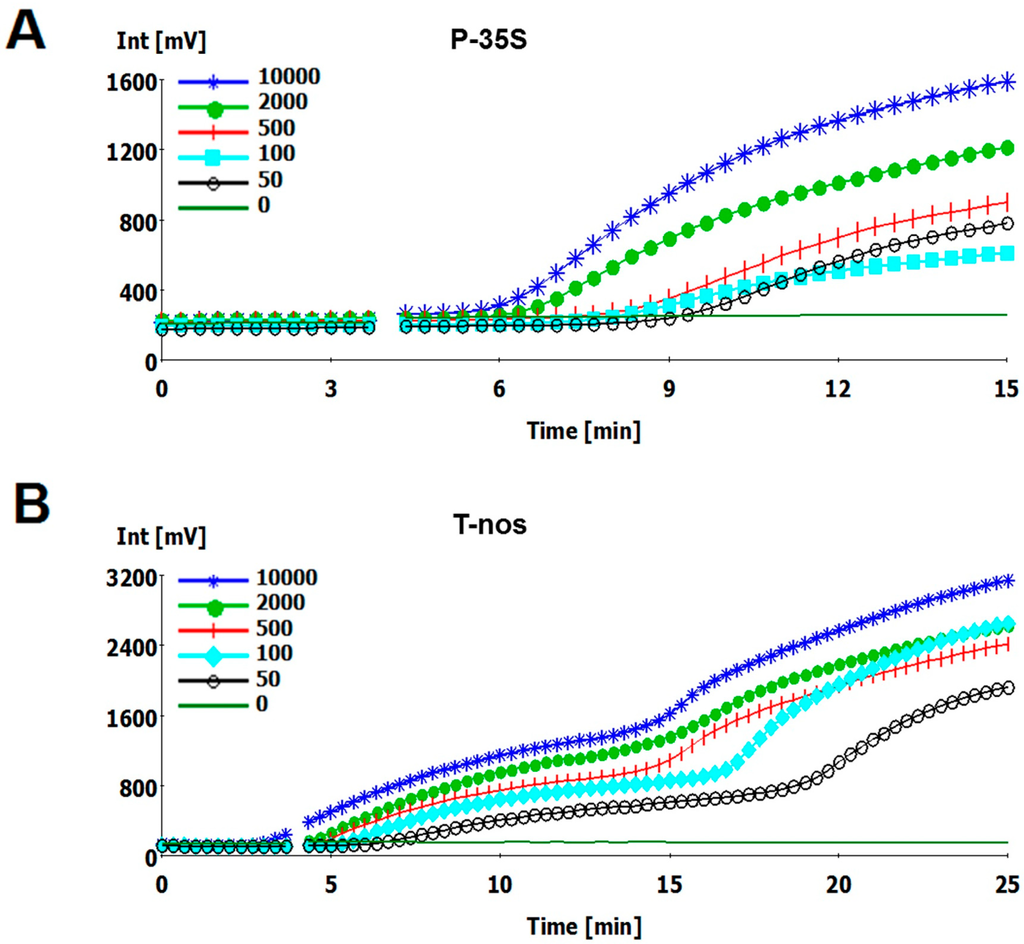 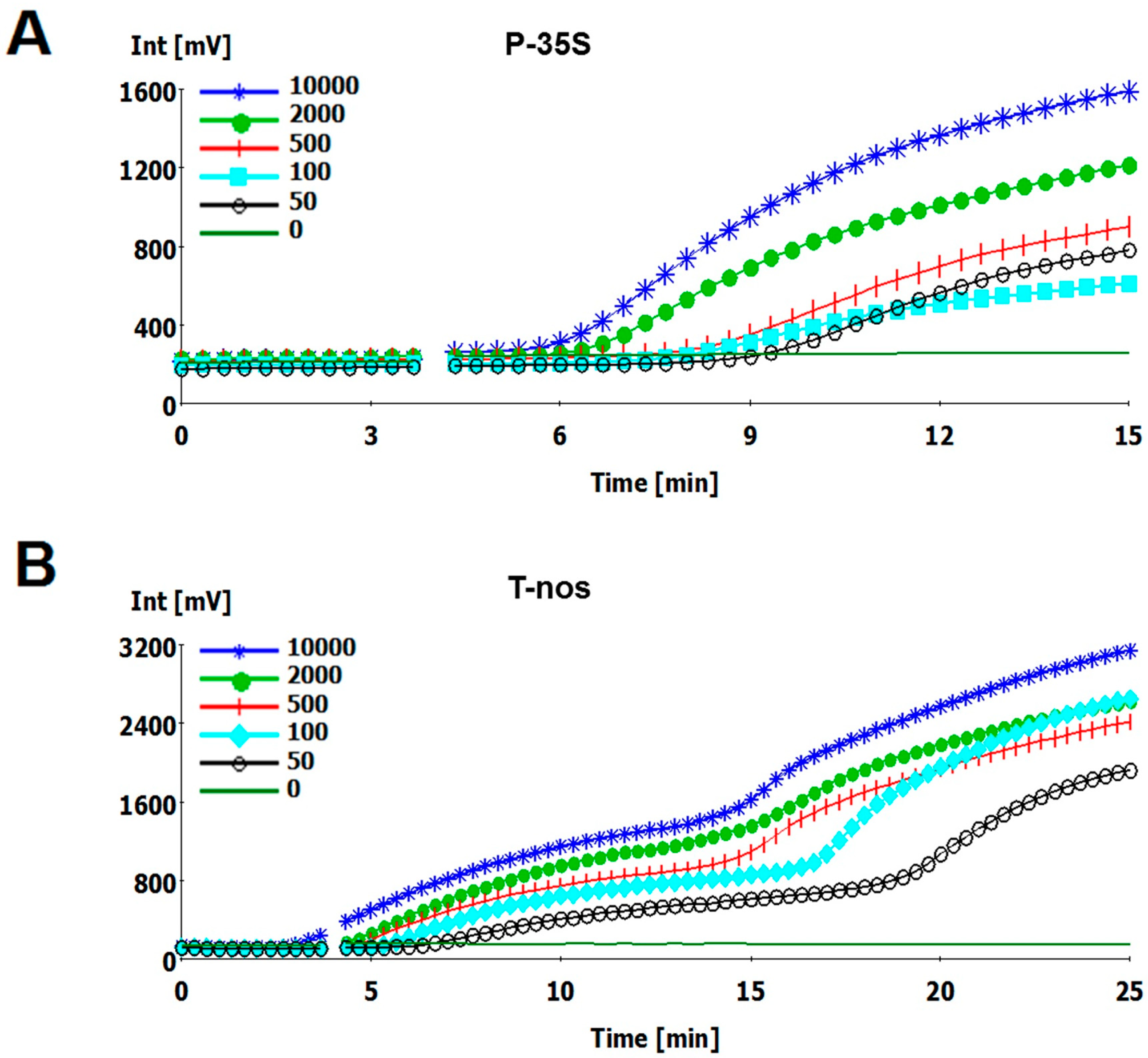 The specificity of the assays was evaluated using genomic DNA from GM maize (Bt11, DAS-59122-7, TC1507, MIR604), GM rice (TT51-1, Kefeng 6, Kemingdao 1), GM cotton (MON15985, MON531), GM soybean A5547-127, and non-GM crops. The DNA concentration of the extracts ranged from 40 to 50 ng/µL. In each RPA reaction, 1 µL genomic DNA was used as the template. Only the positive samples exhibited the existence of P-35S and/or T-nos target elements, while no amplification signals were observed for the GM crops without target elements or the non-GM crops (Table 4). The test results are consistent with the AGBIOS GM Crop Database [12] and other references [13,14,15], indicating that two sets of primers can be used as a screening method for rapidly detecting GMOs. 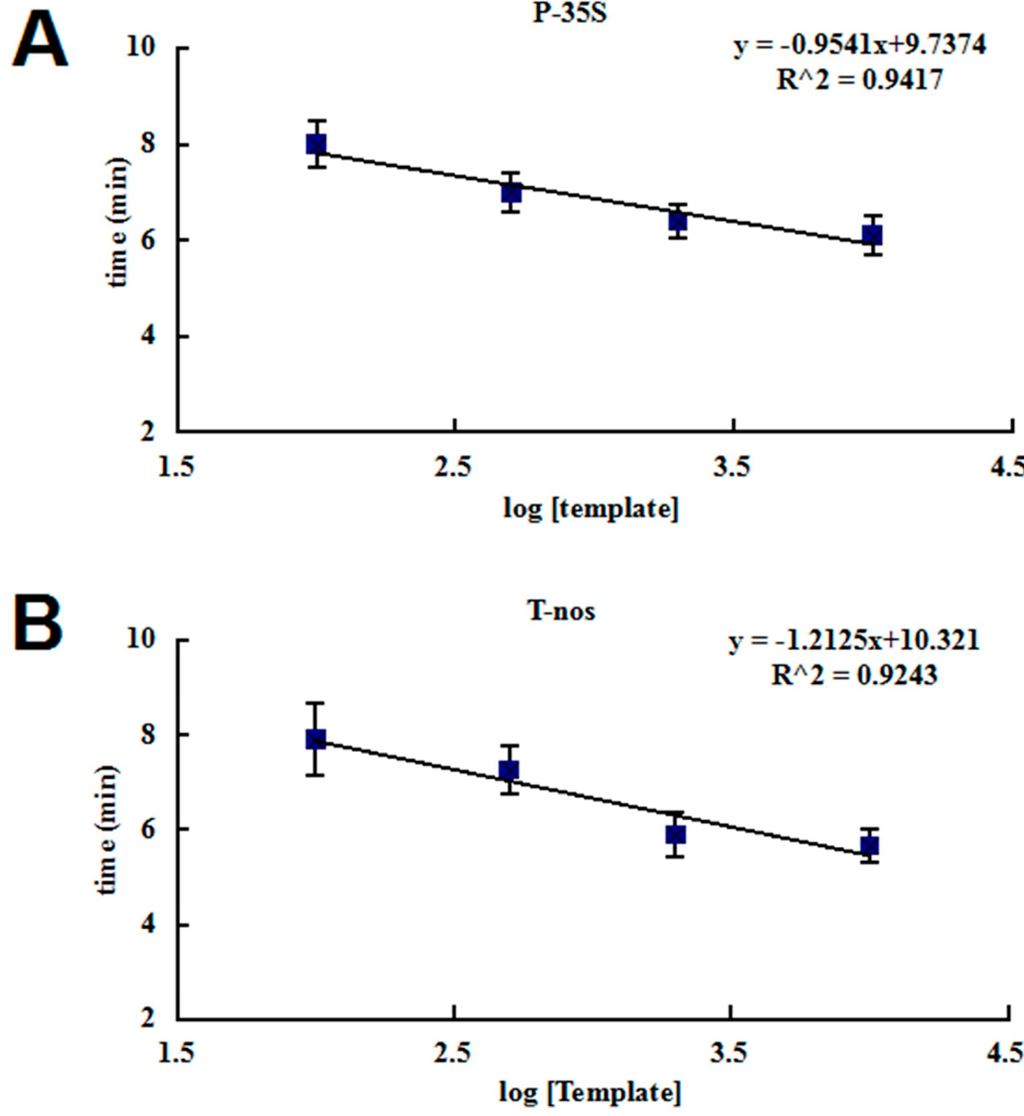 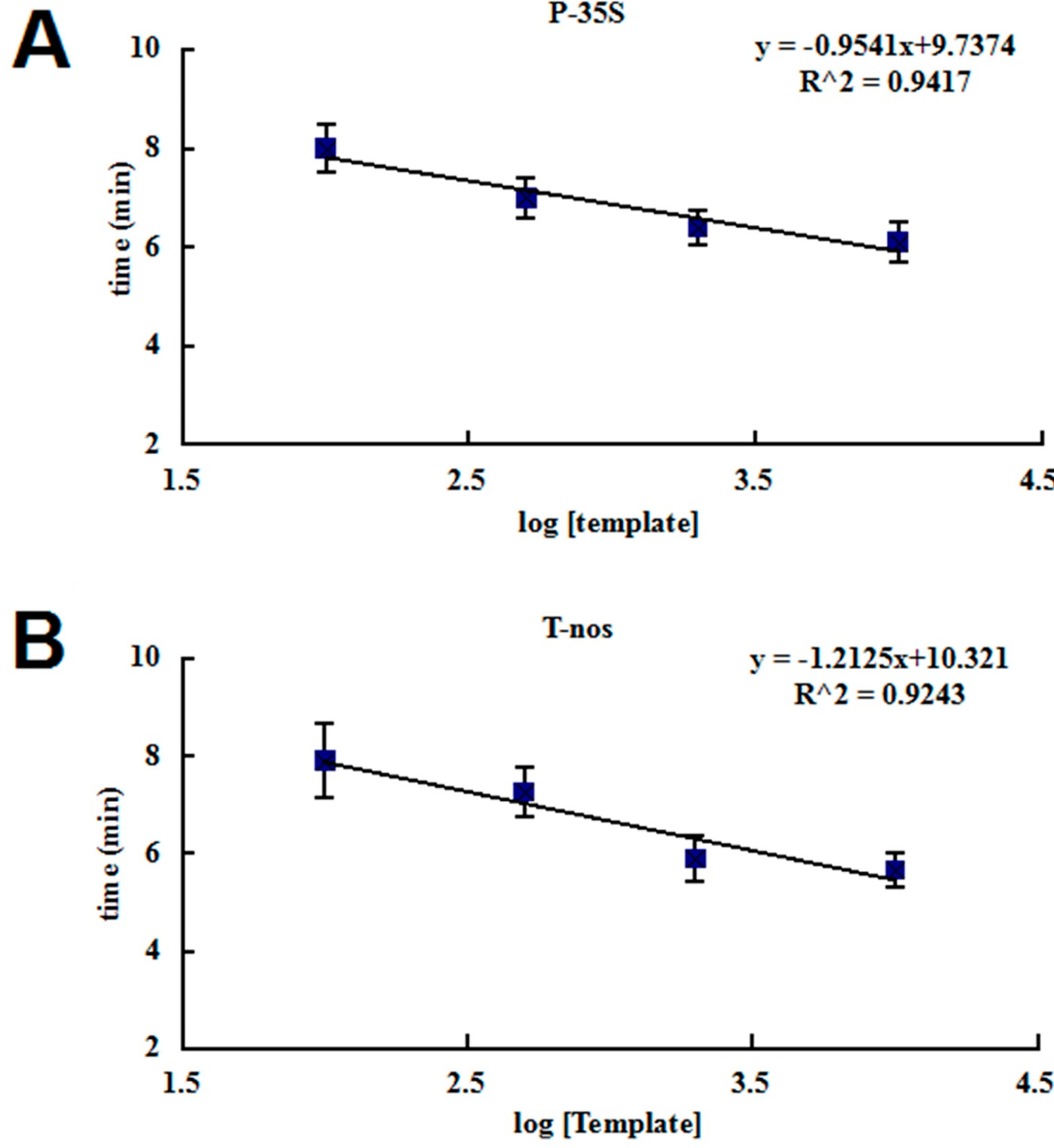 Over the last decade, nucleic acid isothermal amplification technologies have undergone rapid development [16]. These methods enable nucleic acid testing without temperature-regulating equipment, and several isothermal amplification technologies have been applied to GMO detection, such as nucleic acid sequence-based amplification (NASBA) in combination with microarray detection [17] and loop-mediated isothermal amplification (LAMP) coupled with gel electrophoresis or SYBR Green [4,18,19,20]. Although these novel approaches show high efficiency, NASBA requires template denaturation, and LAMP requires 4 primer pairs to amplify the target at temperatures in the range of 60–65 °C for 60 min; thus, these methods do not satisfy the requirement of simplicity for GMO screening detection.
RPA is another type of nucleic acid isothermal amplification technology. The RPA platform used in this study contains all of the enzymes and reagents necessary to amplify DNA, and only 3 target-specific oligonucleotides are required to conduct a real-time RPA assay. The use of a portable fluorescence detector (Twista, TwistDX, Cambirdge, UK) can reduce the test time to 15 to 25 min. This process is easier and more rapid than other isothermal amplification methods. The Twista detector contains a heated incubation chamber and can test 8 samples simultaneously, and the monitored data can be analyzed by a computer program.
In RPA assays, the amplification reaction can be assessed by gel electrophoresis, fluorescent probes, or lateral-flow strips. Compared with the other two assessment formats, real-time RPA combined with a fluorescent probe is more suitable for rapid and accurate detection. Real-time RPA enables easy visual confirmation of the presence of fluorescence signals, and thus no subsequent operation process is needed. More importantly, the testing process is completed with closed tubes, thereby avoiding product contamination and false-positive test results.
The results of our current study showed that both PRA primer sets of P-35S and T-nos could reliably detect 100 copies or more of the targets, a result equivalent to detecting GM content at the level of 0.1%. Although the sensitivity of the developed real-time RPA assays was lower than that of real-time PCR [11,21], it was sufficient to satisfy the requirements of GMO labeling systems in every country [2]. For RPA, primer screening is very important, and the sequences of the oligonucleotides are critical to RPA performance. However, precise rules for obtaining a good primer have not yet been established [22], and several primers may need to be screened to establish a rapid, sensitive RPA detection method for a particular application. As a general rule, when designing optimal primers, regions with high (>70%) GC or AT content, repetitive sequences, and regions with potential secondary structure should be avoided according to the manual produced by the TwistDX company [23]. In summary, we successfully used real-time RPA to detect P-35S and T-nos regulatory elements in samples of four major GM crop species. This method that we report generated reliable results for each sample, demonstrating the high specificity of the RPA assay and its suitability for GMO screening.

RPA real time fluorescent assays include a forward primer, a reverse primer, and a probe. The primers were designed based on the sequences of P-35S (GenBank accession no. V00141) and T-nos (GenBank no. V00087). Positions 7045–7434 of the P-35S and 1847–2099 of the T-nos sequences were selected as target region for primer design and RPA detection. The fluorescent reporter (FAM) and the fluorescent quencher (BHQ1) were conjugated to the T-bases of the probe at internal positions, and an abasic nucleotide analogue such as a tetrahydrofuran (THF) or a 'dSpacer' was located in the central part of the two fluorescent groups, with the phosphate labeled on the 3' end. The RPA primers and probes were synthesized by Sangon (Shanghai, China).

RPA reactions were performed in a total volume of 50 µL using a TwistAmp Exo kit (TwistDX, Cambridge, UK), 29.5 µL of TwistAmp rehydration buffer, 420 nM each RPA primer, 120 nM RPA probe, 14 mM magnesium acetate, and 1 µL of genomic DNA. All reagents except for the magnesium acetate were prepared in a master mix, which then was added to the freeze-dried reaction tube. Magnesium acetate was added to the tube and spun into the rehydrated material, and the tubes were immediately placed in the Twista tube scanner device (TwistDX, Cambridge, UK) to start the reaction at 39 °C for 15–25 min (for a low template copy number, the strip was removed after 4 min, vortexed, gently spun, and then placed back in the device). Fluorescence measurements were taken every 20 s. For positive samples, the fluorescence signal increased markedly due to successful amplification. The slope validation results (mV/min) are 30 and 24 for P-35S and T-nos, respectively. A probit regression was performed using the IBM SPSS for Windows 19.0 (IBM Corp., Armonk, NY, USA) from six replicates results of sensitivity test.

In this research, we have developed a rapid real-time RPA technique for the detection of P-35S and T-nos regulatory elements, which are widely employed in GM crops. This novel method can be easily adapted to other target genes for GMO detection.

This research was supported by Chinese National Major Special Project for Development of Transgenic Organisms (2013ZX08012-001 and 2014ZX08012-001). We thank Eric M. Hallerman at Virginia Polytechnic Institute and State University for valuable feedback on the manuscript. The authors wish to express their appreciation to the reviewers of this paper.

© 2014 by the authors; licensee MDPI, Basel, Switzerland. This article is an open access article distributed under the terms and conditions of the Creative Commons Attribution license (http://creativecommons.org/licenses/by/4.0/).