Autophagy is associated with drug resistance which has been a threat in chemotherapy of hepatocellular carcinoma (HCC). The interconnected molecular regulators between autophagy and apoptosis serve as switching points critical to the ultimate outcome of the cell. Our study was performed to investigate the crosstalk between autophagy and apoptosis in HCC after the treatment of matrine. Flow cytometry and TUNEL (terminal dexynucleotidyl transferase (TdT)-mediated dUTP nick end labeling) assay were used to detect apoptosis in vitro and in vivo, respectively. Bax oligomerization and Cytochrome c release assay were performed. Immunoprecipitation and siRNA transfection were used to detect the interplay between Bcl-2/Bcl-xL,Bax, and Beclin 1. Our results showed that: (1) matrine not only activated caspase and PARP (poly ADP-ribose polymerase) cleavage, but also triggered autophagy as shown by the increased levels of LC3II, Beclin 1, and PI3KC3, and the decreased level of p62; (2) matrine treatment promoted the JNK-Bcl-2/ Bcl-xL-Bax/Bak pathway; (3) Bax was oligomerized, the mitochondrial membrane potential altered, and Cytochrome c was released subsequently; (4) Bax interacts with Beclin 1 and inhibits autophagy, which may be a new crosstalk point; and (5) finally, we showed that matrine suppressed the growth of a MHCC97L xenograft in vivo for the first time. In conclusion, the JNK-Bcl-2/Bcl-xL-Bax/Bak pathway mediates the crosstalk between matrine-induced autophagy and apoptosis via interplay with Beclin 1. View Full-Text
Keywords: matrine; JNK; Bax;Bcl-2; Bcl-xL; Beclin 1 matrine; JNK; Bax;Bcl-2; Bcl-xL; Beclin 1
►▼ Show Figures 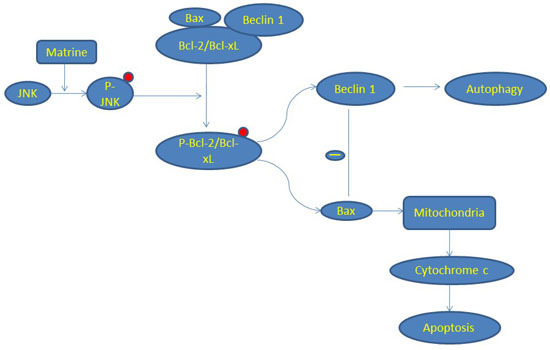