The 27.8 kDa membrane protein expressed in flounder (Paralichthys olivaceus) gill cells was proved to be a receptor mediating lymphocystis disease virus (LCDV) infection. In this study, SDS-PAGE and Western blotting demonstrated that 27.8 kDa receptor (27.8R) was shared by flounder and turbot (Scophthalmus maximus). Indirect immunofluorescence assay (IIFA) and immunohistochemistry showed that 27.8R was widely expressed in tested tissues of healthy turbot. The indirect enzyme-linked immunosorbent assay indicated that 27.8R expression was relatively higher in stomach, gill, heart, and intestine, followed by skin, head kidney, spleen, blood cells, kidney and liver, and lower in ovary and brain in healthy turbot, and it was significantly up-regulated after LCDV infection. Meanwhile, real-time quantitative PCR demonstrated that LCDV was detected in heart, peripheral blood cells, and head kidney at 3 h post infection (p.i.), and then in other tested tissues at 12 h p.i. LCDV copies increased in a time-dependent manner, and were generally higher in the tissues with higher 27.8R expression. Additionally, IIFA showed that 27.8R and LCDV were detected at 3 h p.i. in some leukocytes. These results suggested that 27.8R also served as a receptor in turbot, and LCDV can infect some leukocytes which might result in LCDV spreading to different tissues in turbot. View Full-Text
Keywords: lymphocystis disease virus; turbot (Scophthalmus maximus); receptor-27.8 kDa; expression dynamics; tissue localization lymphocystis disease virus; turbot (Scophthalmus maximus); receptor-27.8 kDa; expression dynamics; tissue localization
►▼ Show Figures 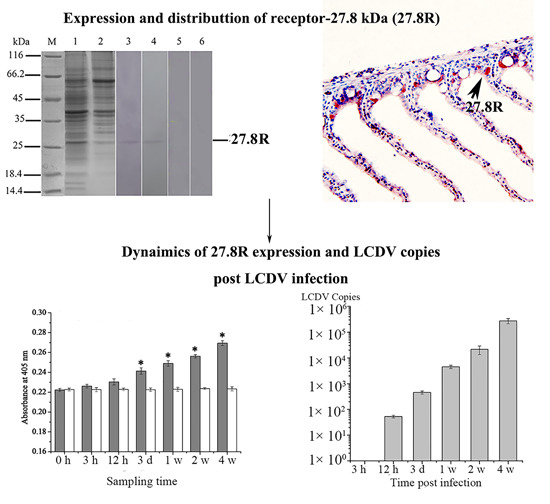