Ion channels included in the family of Connexins (Cx) help to control cell proliferation and differentiation of neuronal progenitors. Here we explored the role of Connexin 50 (Cx50) in cell fate modulation of adult spinal cord derived neural precursors located in the ependymal canal (epSPC). epSPC from non-injured animals showed high expression levels of Cx50 compared to epSPC from animals with spinal cord injury (SCI) (epSPCi). When epSPC or epSPCi were induced to spontaneously differentiate in vitro we found that Cx50 favors glial cell fate, since higher expression levels, endogenous or by over-expression of Cx50, augmented the expression of the astrocyte marker GFAP and impaired the neuronal marker Tuj1. Cx50 was found in both the cytoplasm and nucleus of glial cells, astrocytes and oligodendrocyte-derived cells. Similar expression patterns were found in primary cultures of mature astrocytes. In addition, opposite expression profile for nuclear Cx50 was observed when epSPC and activated epSPCi were conducted to differentiate into mature oligodendrocytes, suggesting a different role for this ion channel in spinal cord beyond cell-to-cell communication. In vivo detection of Cx50 by immunohistochemistry showed a defined location in gray matter in non-injured tissues and at the epicenter of the injury after SCI. epSPCi transplantation, which accelerates locomotion regeneration by a neuroprotective effect after acute SCI is associated with a lower signal of Cx50 within the injured area, suggesting a minor or detrimental contribution of this ion channel in spinal cord regeneration by activated epSPCi. View Full-Text
Keywords: connexins; spinal cord; ependymal stem progenitor cells connexins; spinal cord; ependymal stem progenitor cells
►▼ Show Figures 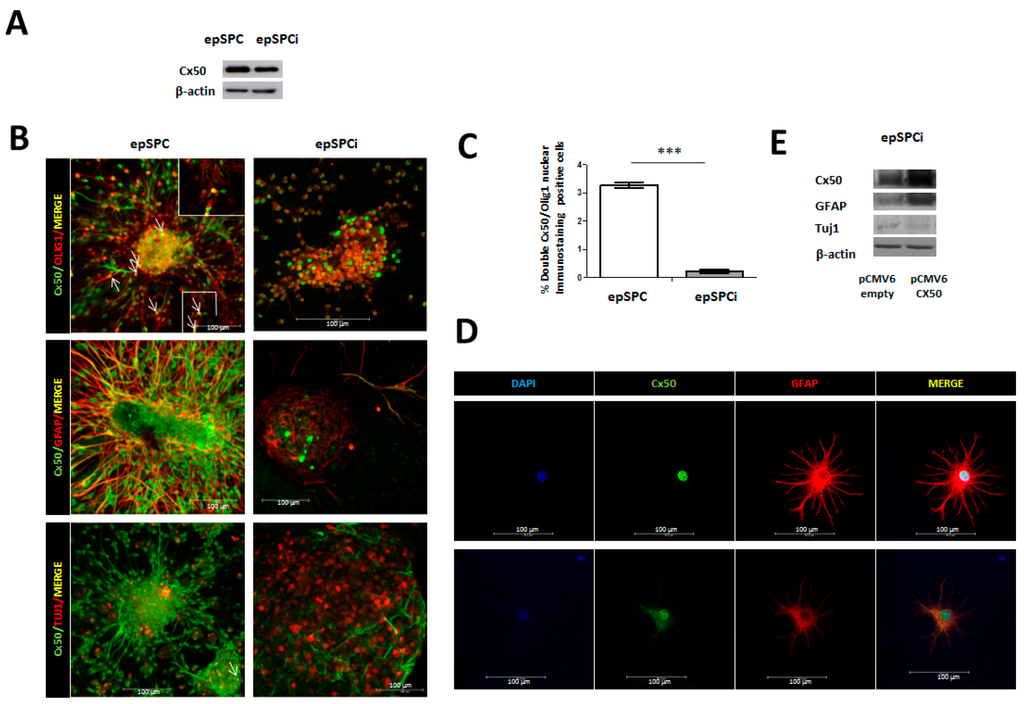