From Genome to Structure and Back Again: A Family Portrait of the Transcarbamylases
Previous Article in Journal

Expression of IL-8, IL-6 and IL-1β in Tears as a Main Characteristic of the Immune Response in Human Microbial Keratitis
Previous Article in Special Issue

Diacylglycerol (DAG)-like lipases are found to play an important role in the life sciences and industrial fields. A putative DAG-like lipase (MgMDL2) from Malassezia globosa was cloned and expressed in recombinant Pichia pastoris. The recombinant MgMDL2 was expressed as a glycosylated protein and purified into homogeneity by anion exchange chromatography. The activity of recombinant MgMDL2 was optimal at 15 °C and pH 6.0, and it keeps over 50% of relative activity at 5 °C, suggesting that MgMDL2 was a cold active lipase. MgMDL2 retained over 80% of initial activity after incubation at 30 and 40 °C for 2.5 h, but it was not stable at 50 °C. Incubation of methanol and ethanol at a concentration of 30% for 2 h did not affect the recombinant enzyme activity, while metal ions, including Ca2+, Mn2+ and Ni2+, sharply inhibited the MgMDL2 activity at 5 mM by 42%, 35% and 36%, respectively. MgMDL2 exhibited a preference for medium chain-length esters with highest activity toward p-nitrophenyl caprylate, while it was active on mono- and diacylglycerol but not on triacylglycerol, indicating that it was a typical DAG-like lipase. By homology modeling, Phe278 was predicted to be involved in the preference of MgMDL2 for monoacyl- and diacyl-glyceride substrates, but not triglycerides. View Full-Text
Keywords: DAG-like lipases; Malassezia globosa; cold active enzyme; glycosylation; structure analysis DAG-like lipases; Malassezia globosa; cold active enzyme; glycosylation; structure analysis
►▼ Show Figures 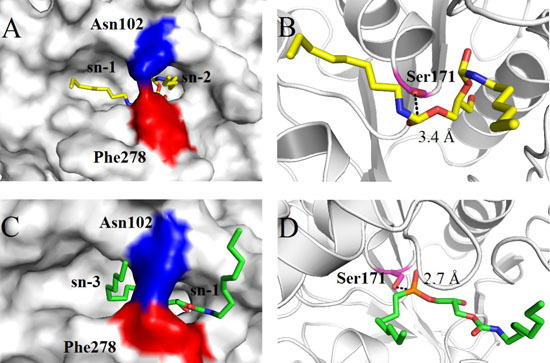