Rubinstein-Taybi syndrome (RSTS, OMIM 180849, 613684), also known as the broad thumb-hallux syndrome, is a rare condition with a prevalence of 1 in 125,000–720,000 births [1,2]. The syndrome is characterized by a group of well-defined clinical features including characteristic facial, dental, and limb dysmorphology, and growth retardation [3]. RSTS can also affect multiple internal organs including the heart, kidney, eyes, ears, and skin [4]. Patients are known to have an increased risk of developing non-cancerous and cancerous tumors, leukemia, and lymphoma [5]. Mental retardation and learning difficulties are other typical findings of RSTS. The average IQ of the patients is 35–50, although cognitive functioning outside this range has also been documented [6].
The diagnosis of RSTS is essentially a clinical diagnosis based on the features described above [7]. Most RSTS cases are sporadic and are caused by de novo mutations [8]. Cytogenetic or molecular abnormalities can be detected in only 55% of patients with RSTS [9]. Missense/non-sense mutations in genes encoding the CREB-binding protein (CREBBP) or the E1A-binding protein (EP300) are the most common, although micro-deletions in chromosome 16p13.3 and other rare mutations have also been reported as genetic causes of this condition [8,10,11,12,13,14,15]. Nevertheless, genetic analyses for identifying mutations in RSTS have often yielded inconsistent results, probably because of inadequacies in the methods used for the analyses, and many mutations remain unconfirmed. Previous studies examining genetic mutations in RSTS have mainly used fluorescence in situ hybridization (FISH) [16,17] or comparative genomic hybridization (CGH) array analyses [14]. Whole genome or exome sequencing (WES) methods have rarely been used. The purpose of this study was to use WES to evaluate the genetic causes of RSTS in a young girl presenting with RSTS and Autism spectrum disorder (ASD).

The typical dysmorphic features of RSTS were observed in the patient’s face and mouth: Microcephaly (head circumference of 32 cm (approximately 3rd to 5th percentile) at birth and 47.8 cm (below the 3rd percentile) at her current age (6.75 years), highly arched eyebrows, long eyelashes, downward-slanting palpebral fissures, a broad nasal bridge, a beaked nose with the nasal septum extending well below the alae, a pouting lower lip, mild micrognathia, and dental crowding.
The patient had big toes that were short and broad, and mild clinodactyly of the fifth digits of both hands. The second, third, and fourth digits of the right hand had short distal phalanges, and the third and fourth digits of the left hand had broad distal phalanges. She also had a curly toe on the fourth digit of both feet and hallux valgus in the right foot. X-ray radiographs showed bilateral pes varus deformities and bilateral big-toe soft tissue thickening. There were abnormal accessory physes on the side of the distal phalanx, as well as other abnormalities in the physes of the big toes of both feet. Hand X-ray radiographs showed delayed carpal bone ossification in both hands and prominent thickening of the soft tissue of all fingers.
Marked growth retardation and poor weight gain were prominent in this patient from birth until her latest evaluation. Her height was 106.3 cm (below the 3rd percentile) and her weight was 17.2 kg (3rd percentile). A videofluoroscopic swallowing study revealed difficulty in swallowing. Furthermore, serum prealbumin and zinc levels were low. Other physical findings in the patient included anomalies of the eye (congenital cataract and nasolacrimal duct obstruction) and skin (pilomatrixoma on the left periauricular area, hypertrichosis on the forehead, anterior chest, and back, as well as nevus depigmentosus on the right calf). Gross hematuria had previously been found at five years of age, although a kidney ultrasound examination showed no abnormal findings. Results of cardiac evaluation were within normal limits. The characteristic physical features and growth curve of the patient are shown in Figure 1.

The patient showed pronounced developmental delay with no meaningful vocabulary. She also showed moderate mental retardation with a full-scale intelligence quotient (IQ) score of 37 on the Korean Wechsler Preschool and Primary Scale for Intelligence (K-WPPSI) and a score of 45 on the Leiter International Performance Scale. Her adaptive functioning level was equivalent to a child of approximately 3–5 years of age. She had shown the typical behavioral characteristics of Autism from early infancy, including abnormalities in communication and social interaction, along with repetitive behavior and restricted interests. Her scores surpassed the diagnostic thresholds on all categories of both the ADOS and ADI-R. She presented the distinctive mannerism of repetitively waving her hand whenever emotionally disturbed. Scores for other questionnaires also supported the diagnosis of Autism including a score of 15 on the social communication questionnaire (SCQ) and a score of 113 on the social component of the social responsiveness scale (SRS). Further behavioral characteristics included marked hyperactivity, short attention span, withdrawal, and poor motor coordination. Frequent snoring was reported, although the possibility of obstructive sleep apnea was deemed low. Brain magnetic resonance imaging (MRI) showed mild pachygyria. Electroencephalogram (EEG) showed intermittent diffuse high-amplitude semirhythmic 1–1.5-Hz delta activity and one episode of diffuse 1.5-Hz rhythmic, synchronous bifrontal δ/ζ activity lasting up to 20 s. 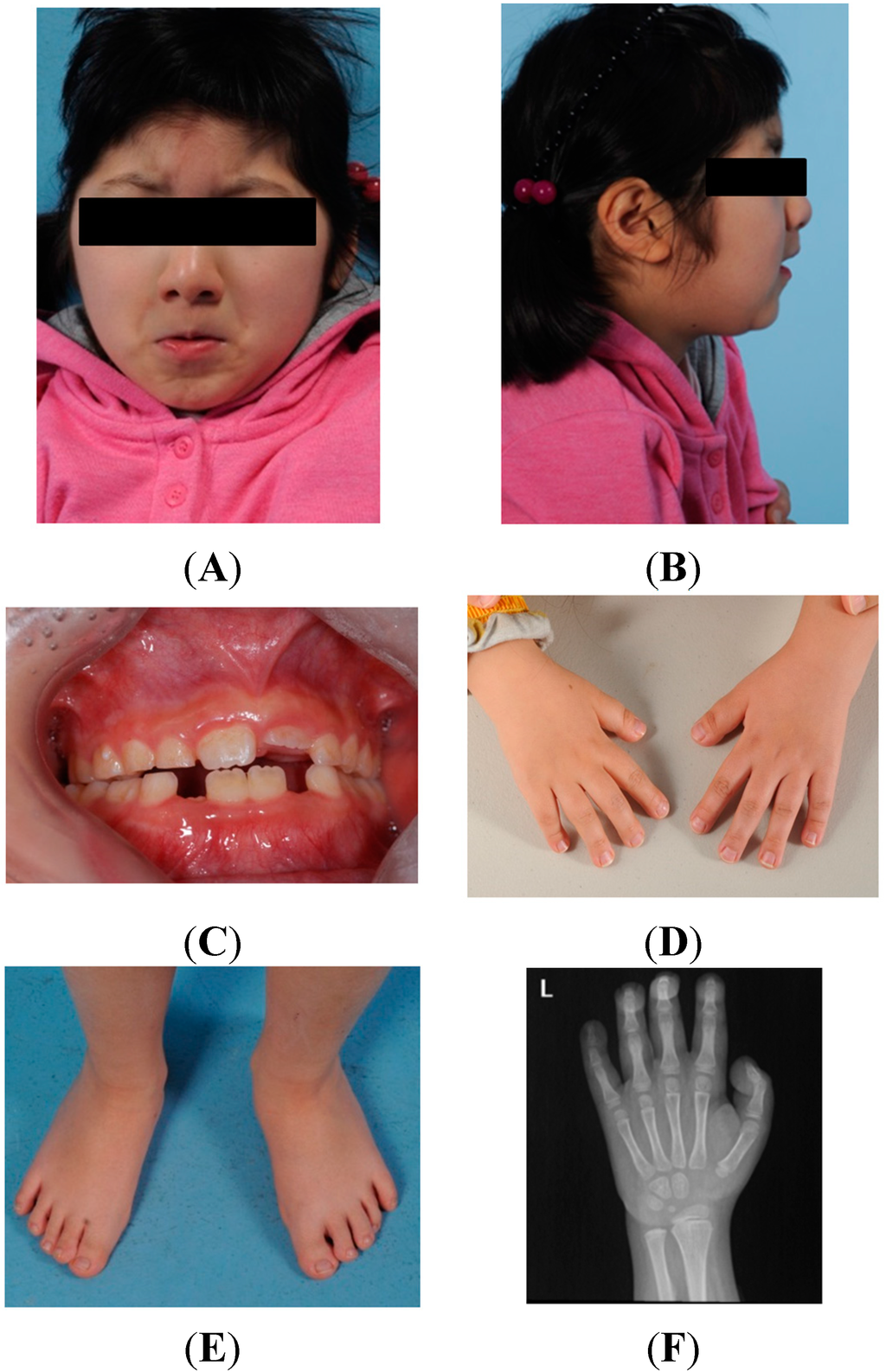 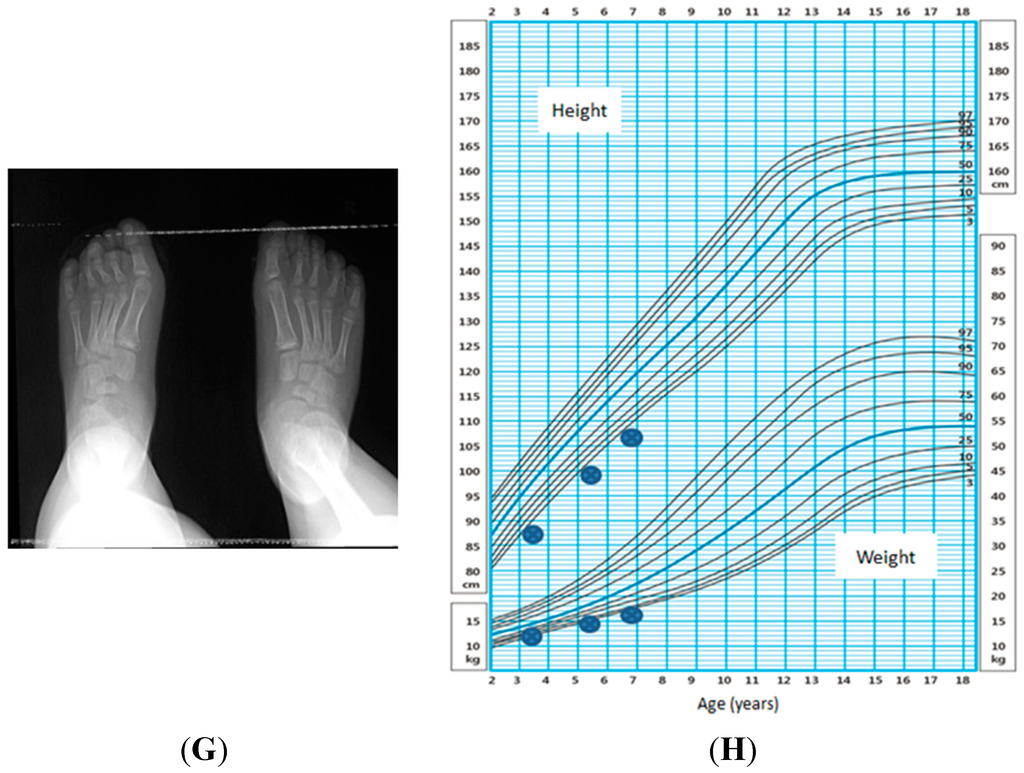 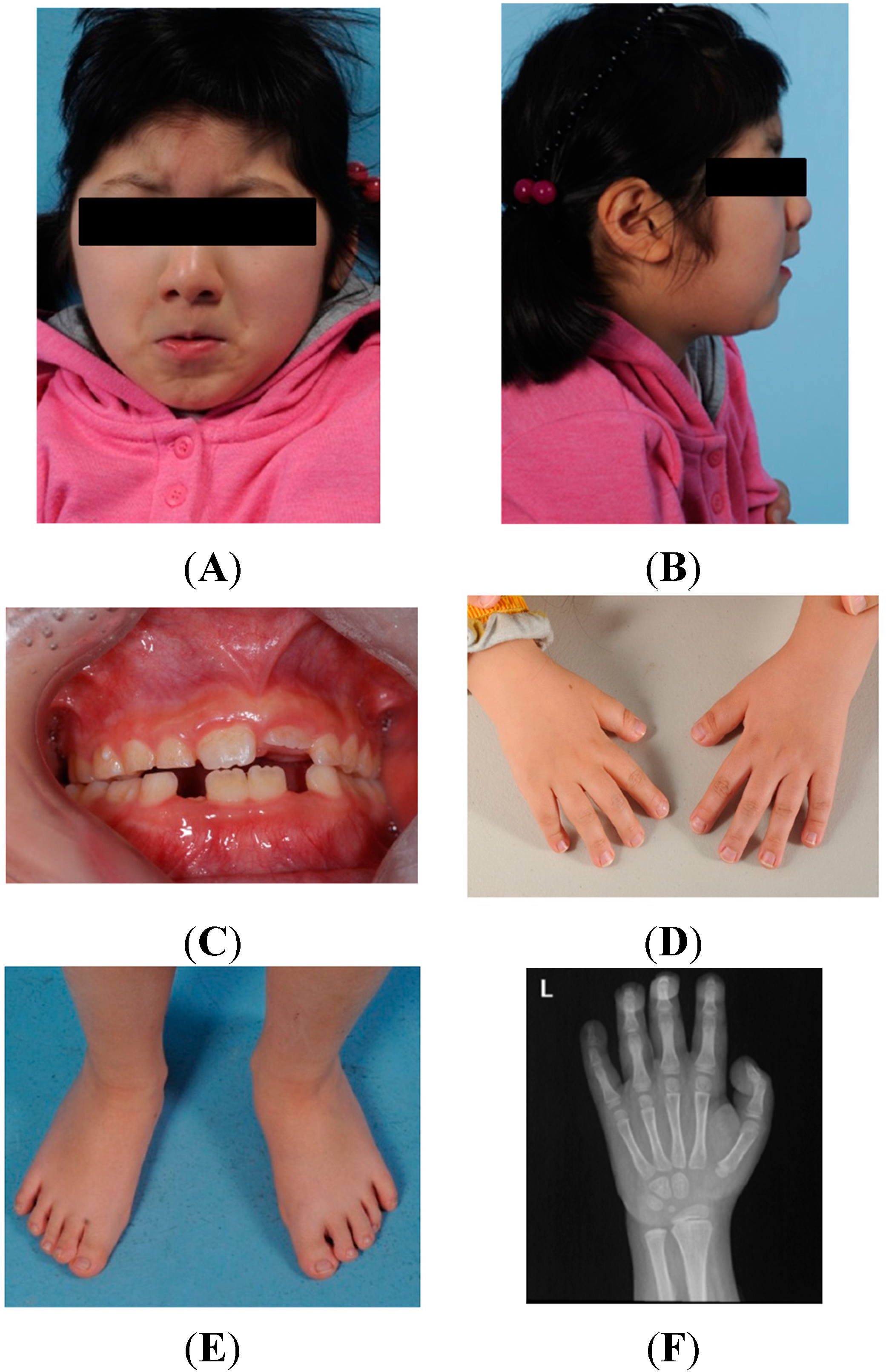 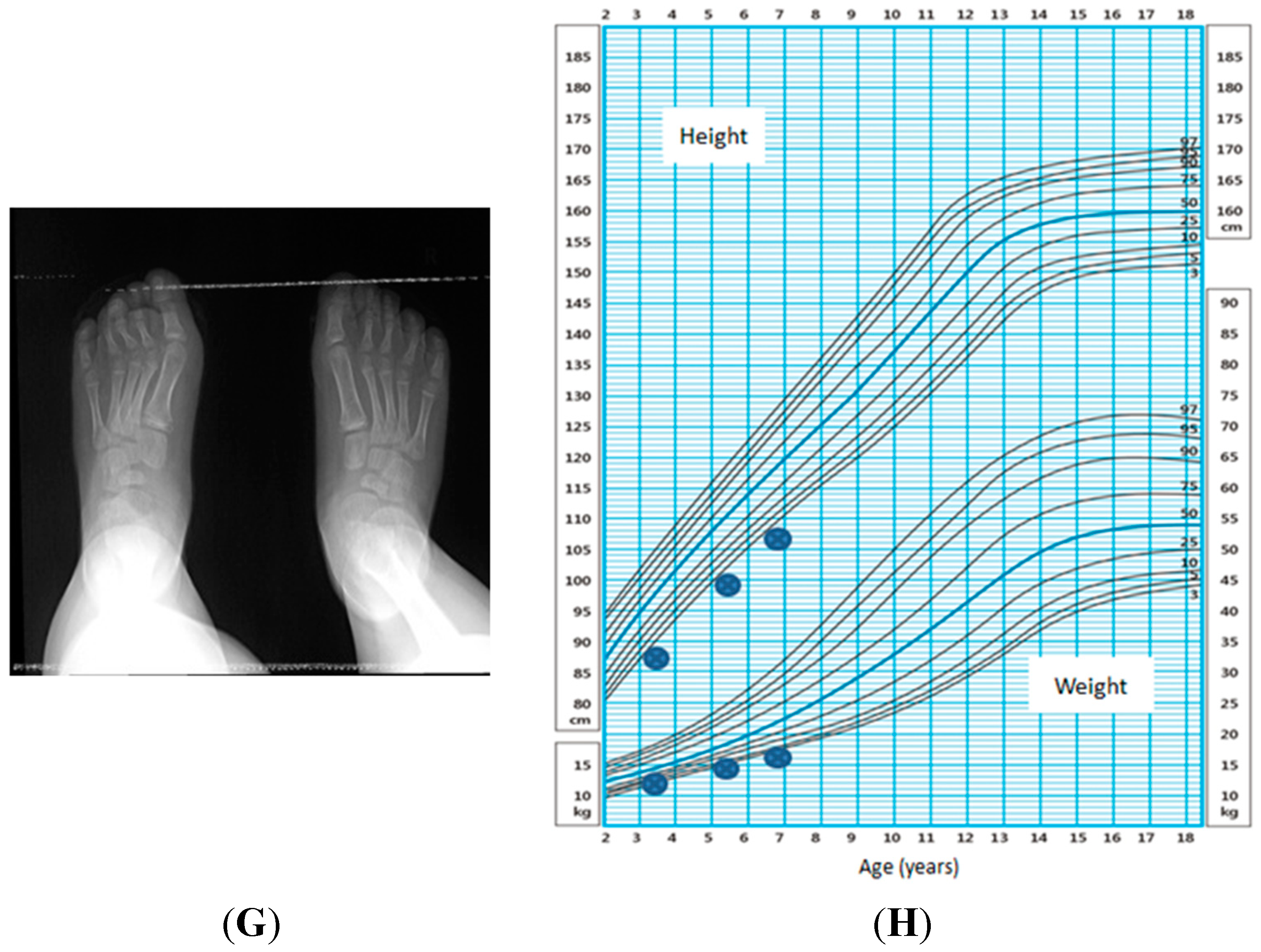 Cytogenetic analyses showed normal karyotypes in the proband and both parents. Using in-depth statistics, we obtained a mean read-depth coverage of 120× over the targeted exome. Each exome contained more than 120,000 total variant calls. An average of 111 million individual paired-end reads of 100 bp were aligned to the human reference genome. More than 94% of targeted exon regions were covered with at least 10× depth, which is sufficient for variant discovery.
We found three de novo variants after filtering for all common variants in the dbSNP (except clinically associated variants) and an in-house control database comprising normal healthy individuals. We performed a visual inspection of read alignments using the Integrative Genomics Viewer (IGV) browser, and then removed “Benign” and “Likely Benign” variants after classification. A summary of the detected variants is described in Table S1.
Three de novo variants were validated by Sanger sequencing: a frameshift mutation in CREBBP (c.2199delG), and missense mutations in TNC (c.323G>A) and IGFALS (c.1415C>T). The results of family sequencing analyses are shown in Figure 2 and the properties of the de novo variants are summarized in Table 1 and Figure 2. The genetic variants of the proband and both parents are shown in Figure 3. 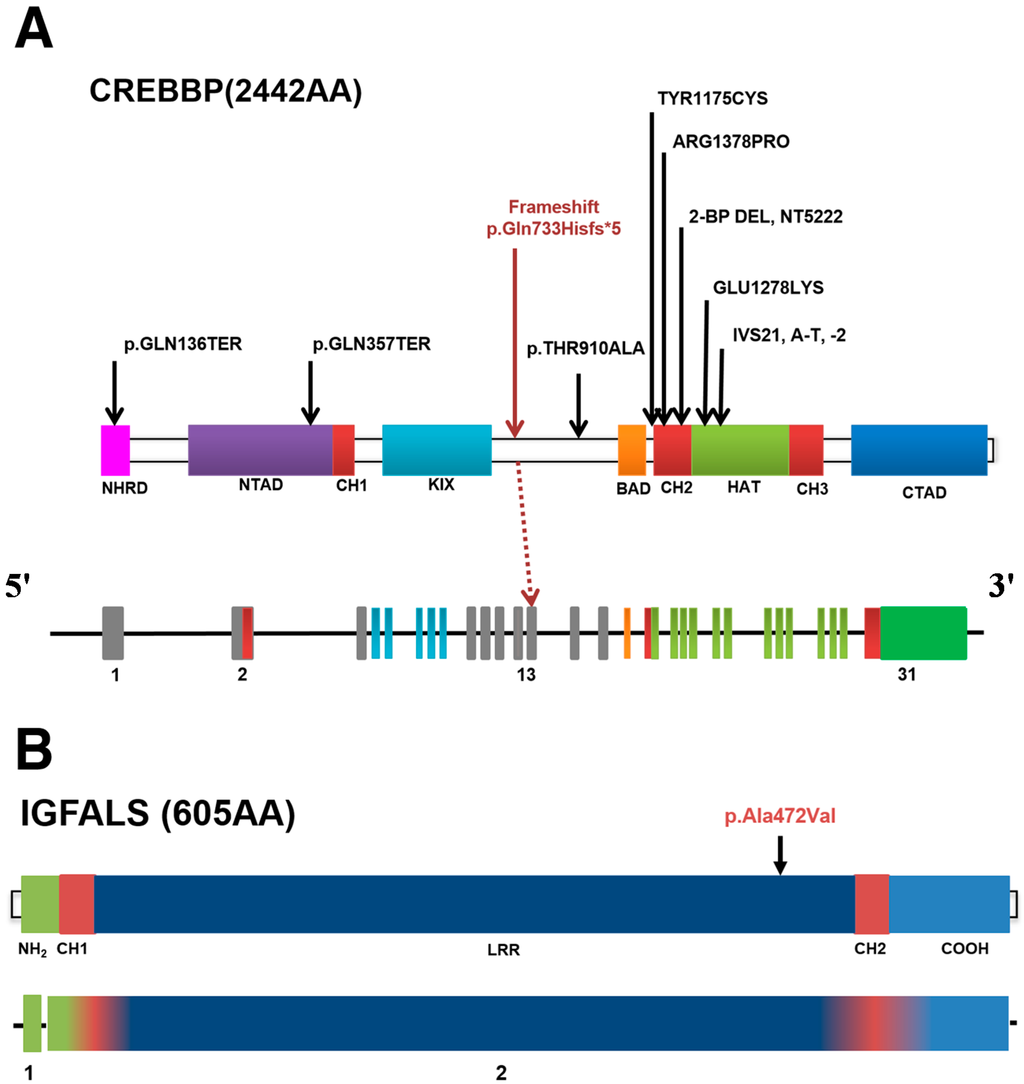 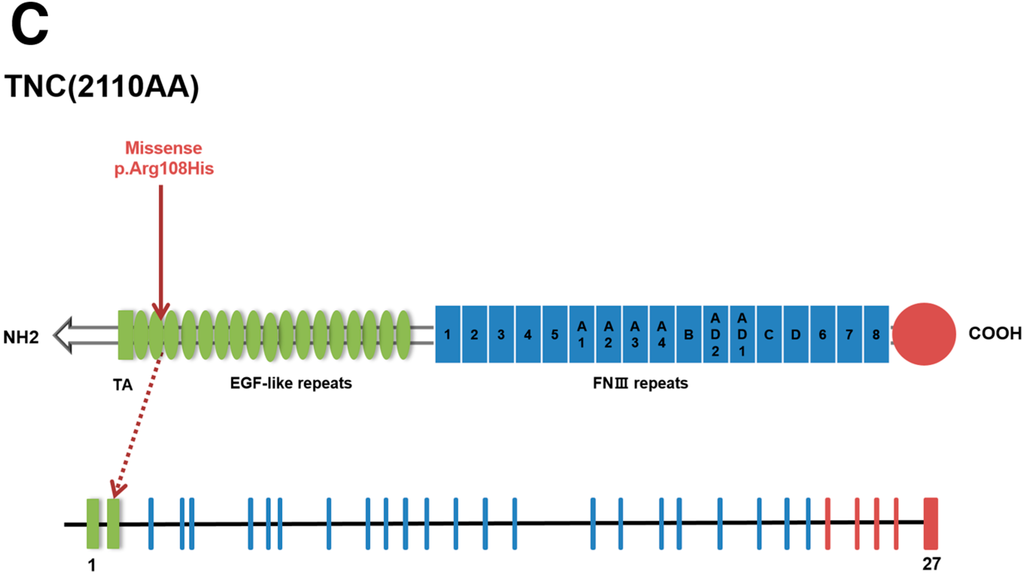 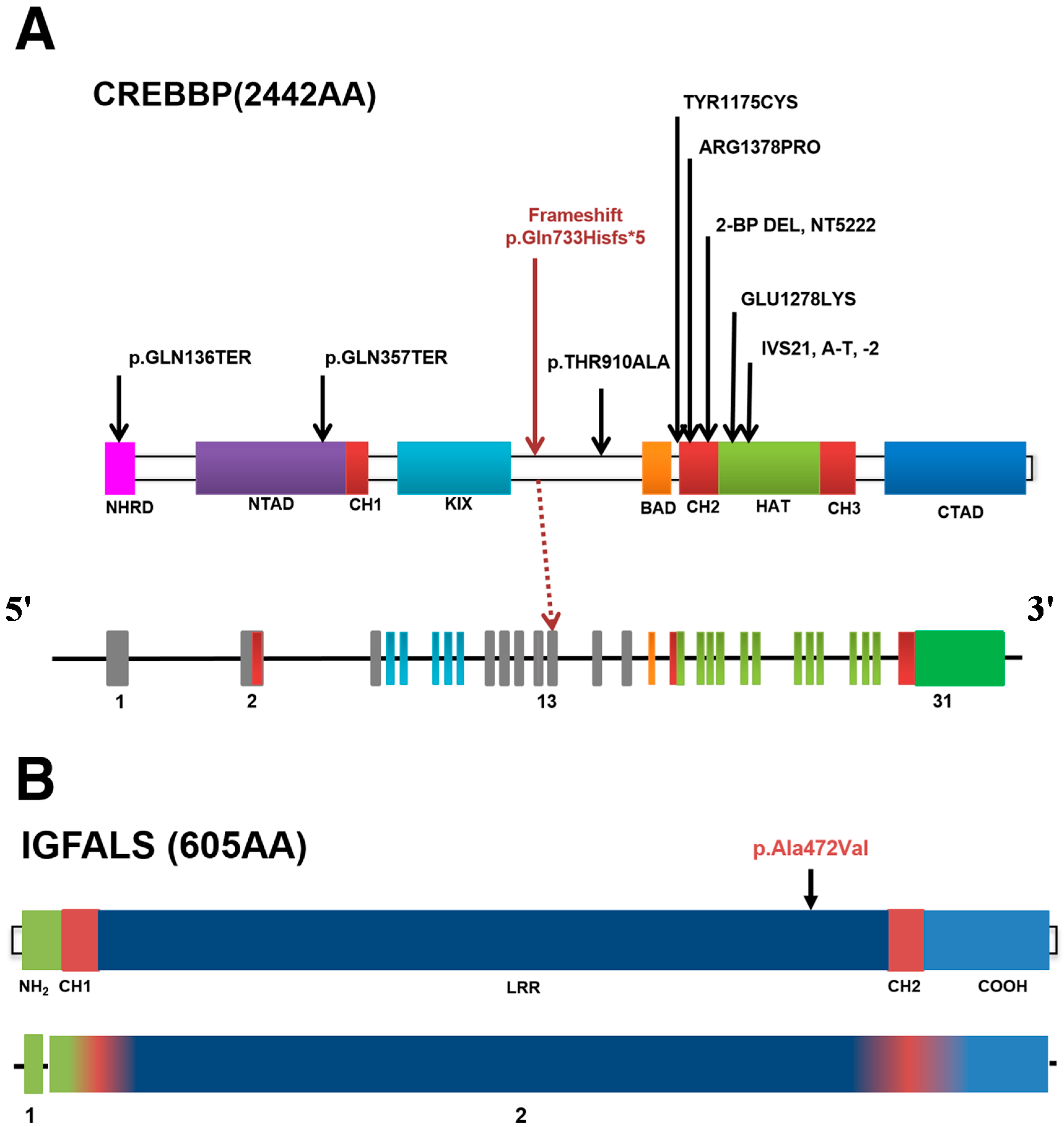 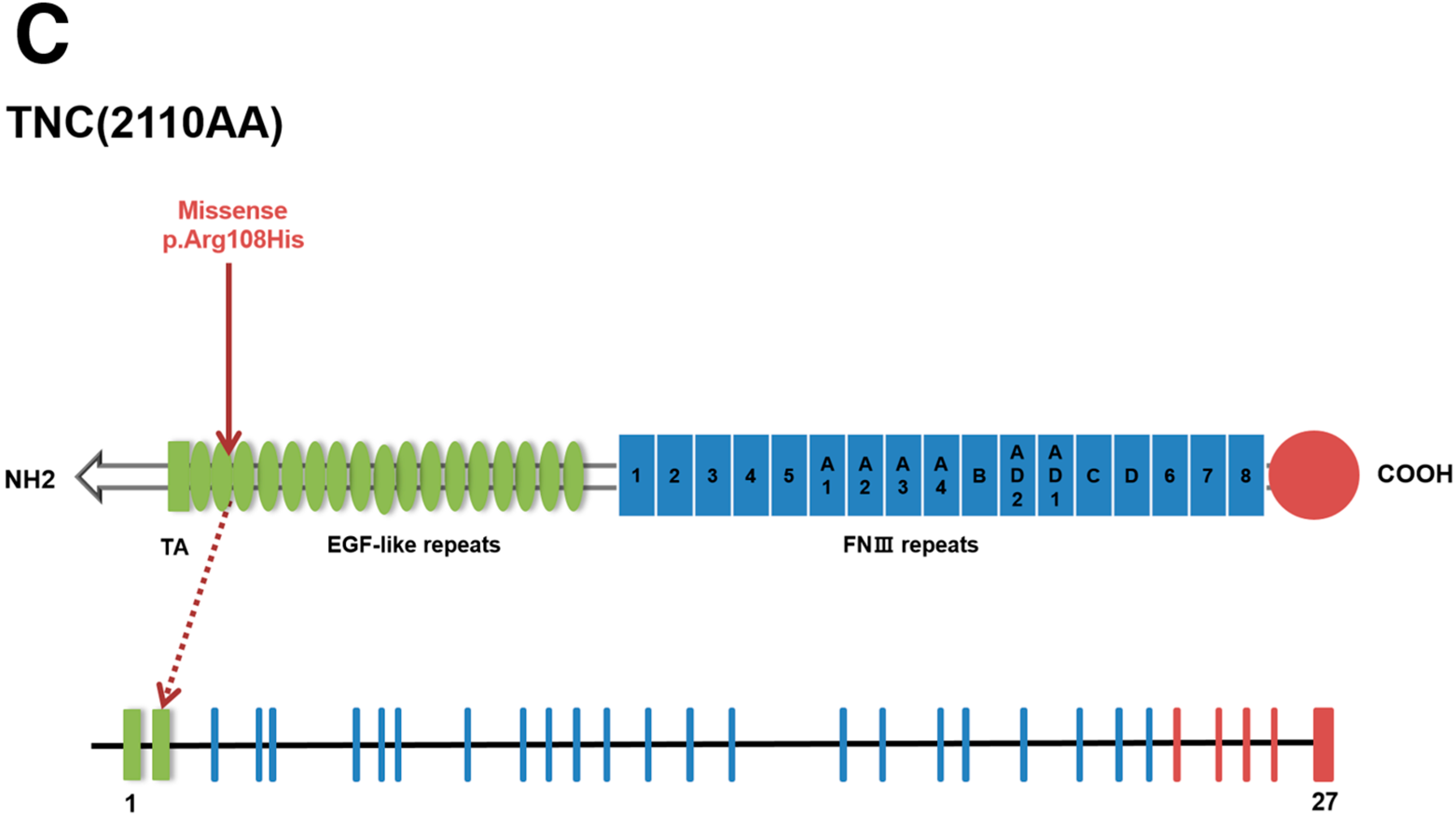 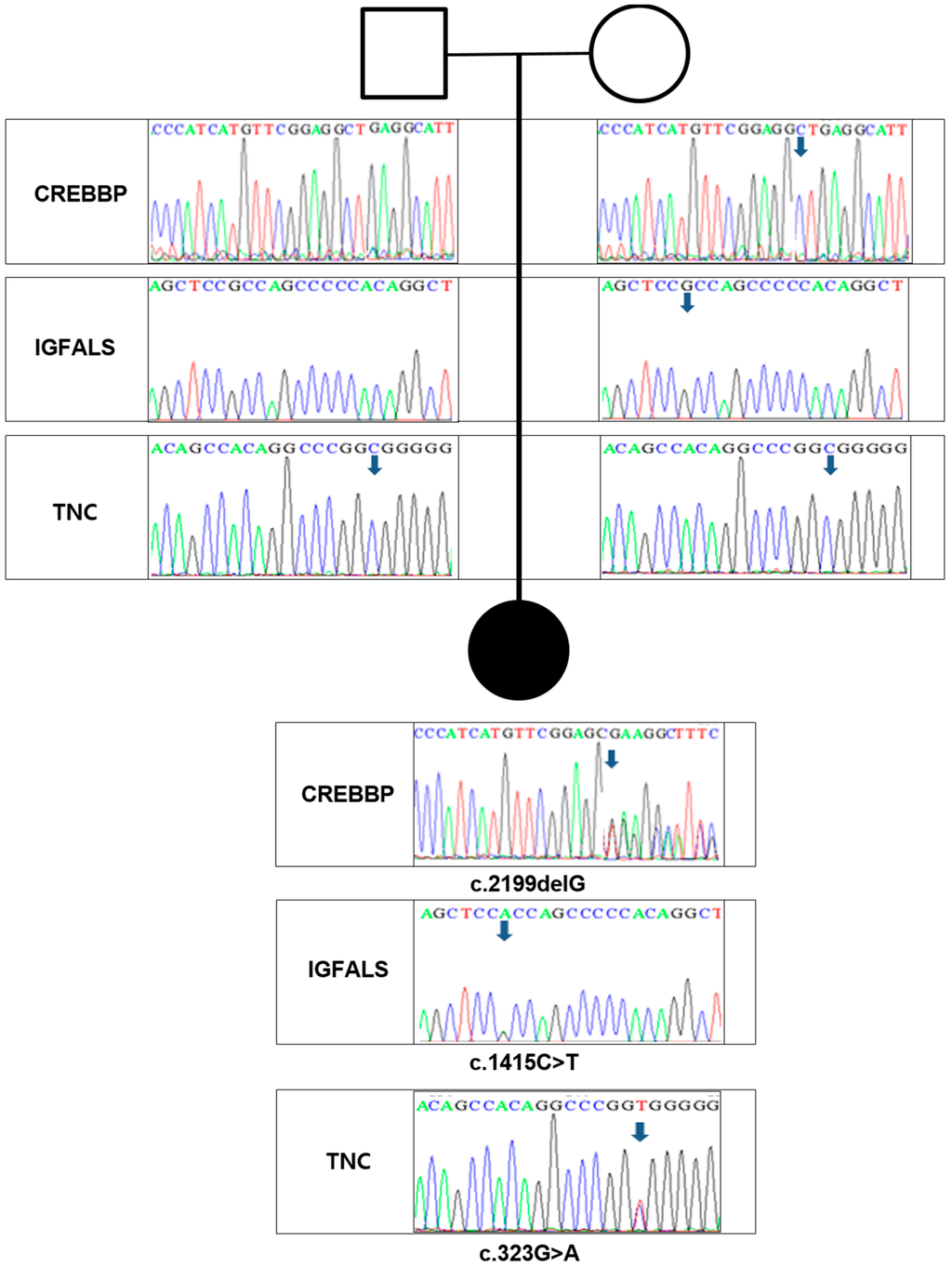 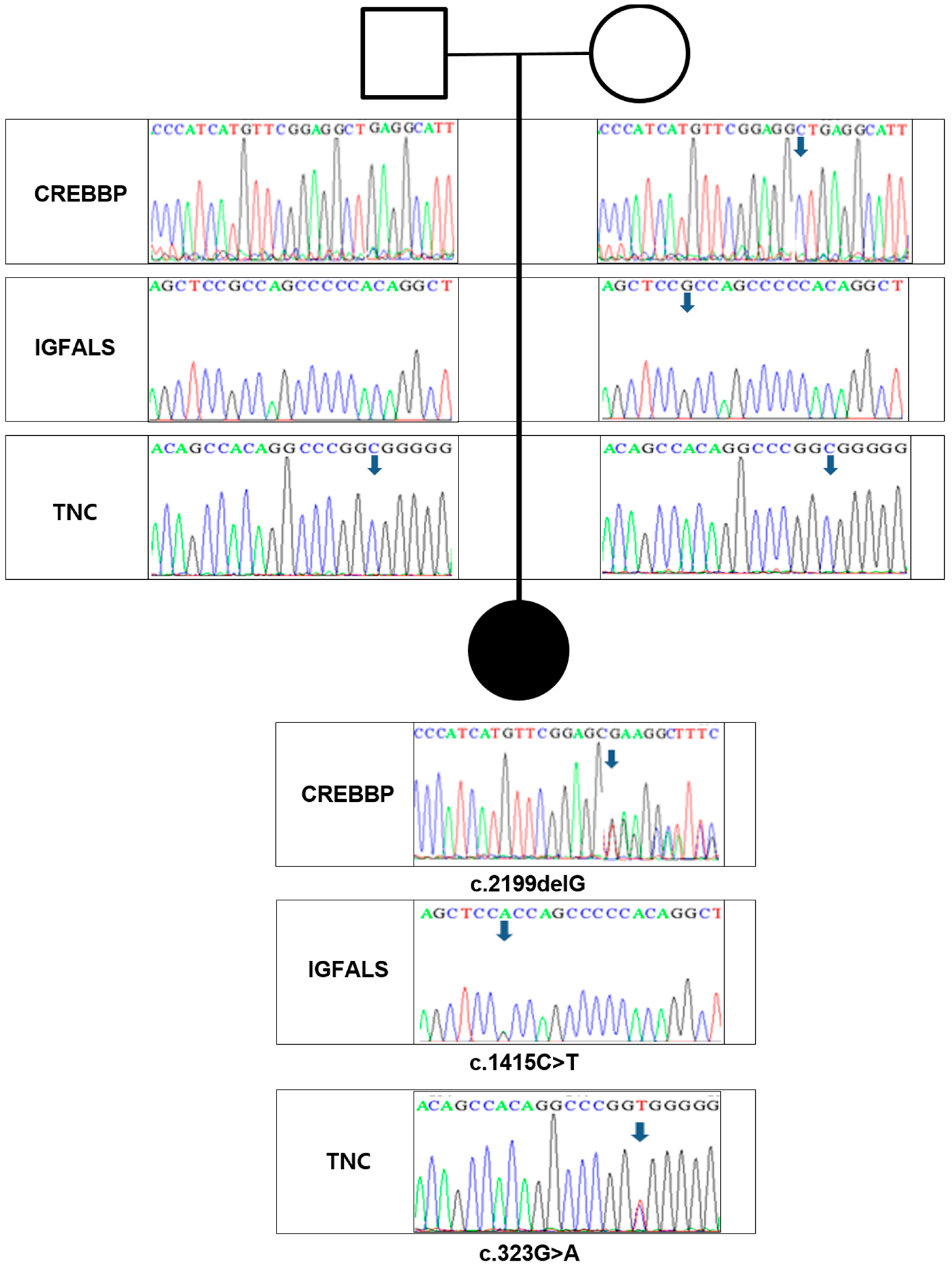 None of the observed sequence changes were observed in normal Korean subjects. The validation results from the normal population are shown in Figure 4.

This study was approved by the Institutional Review Board (IRB) of the Seoul National University Bundang Hospital (Seongnam, Gyeonggi, Korea). Written informed consent was obtained from both parents of the patient.

The patient, a girl aged 6 years and 8 months, was examined in the child psychiatry clinic of the Seoul National University Bundang Hospital. She was thoroughly evaluated to assess problems related to delayed development and dysmorphology. A genetic assessment to diagnose RSTS, a possibility indicated during a previous diagnosis process, was also performed. The patient was the only child of a healthy non-consanguineous couple. Both biological parents were healthy with no clinically significant medical, developmental, or neuropsychological illnesses.

RSTS is a rare disorder characterized by facial, dental, and limb dysmorphology, growth retardation, and developmental disorders including intellectual disability and Autism spectrum disorder. Although many de novo mutations have been proposed as the genetic cause of RSTS, genetic analyses to identify mutations have often yielded inconsistent results due to inadequacies in the analysis methods, and many mutations are yet to be confirmed. The objective of this study was to investigate the genetic background of a young girl with RSTS presenting with an Autism phenotype, using whole exome sequencing (WES). We observed de novo variants in the CREBBP, TNC, and IGFALS genes. As far as the authors know, this is the first report to suggest that the TNC and IGFALS genes might contribute to clinical signs that are uncommon in RSTS patients.

A summary of this article was previously presented at the Annual Meeting of the American Society of Human Genetics, 2013, in Boston, MA, USA.
This work was supported by the Korea Healthcare Technology R&D project, Ministry of Health & Welfare, Republic of Korea [Grant Number A120029], Korean NRF grants (2011-0030049), and a grant from KRIBB Research Initiative Program.