Polymorphisms of the Ovine BMPR-IB, BMP-15 and FSHR and Their Associations with Litter Size in Two Chinese Indigenous Sheep Breeds
Previous Article in Journal

Background: It is well known that diabetes mellitus impairs immunity and therefore is an independent risk factor for tuberculosis. However, the influence of associated metabolic factors, such as hypertension, dyslipidemia and gout has yet to be confirmed. This study aimed to investigate whether the strong association between tuberculosis and diabetes mellitus is independent from the influence of hypertension and dyslipidemia, and its treatment in elderly Taiwanese patients. Methods: A total of 27,958 patients aged more than 65 years were identified from the National Health Insurance Research Database (NIHRD) in 1997 and were followed from 1998 to 2009. The demographic characteristics between the patients with and without diabetes were analyzed using the χ2 test. A total of 13,981 patients with type 2 diabetes were included in this study. Cox proportional hazard regression models were used to determine the independent effects of diabetes on the risk of tuberculosis. Results: After adjusting for age, sex, other co-morbidities and medications, calcium channel blocker, beta blocker and statin users had a lower independent association, with risk ratios of 0.76 (95% CI, 0.58–0.98), 0.72 (95% CI, 0.58–0.91) and 0.76 (95% CI, 0.60–0.97), respectively. Conclusion: Calcium channel blocker, beta blocker and statin therapy may decrease the incidence of tuberculosis infection in elderly Taiwanese patients with type 2 diabetes. View Full-Text
Keywords: statin; beta blocker; calcium channel blocker; tuberculosis; elderly; diabetes statin; beta blocker; calcium channel blocker; tuberculosis; elderly; diabetes
►▼ Show Figures 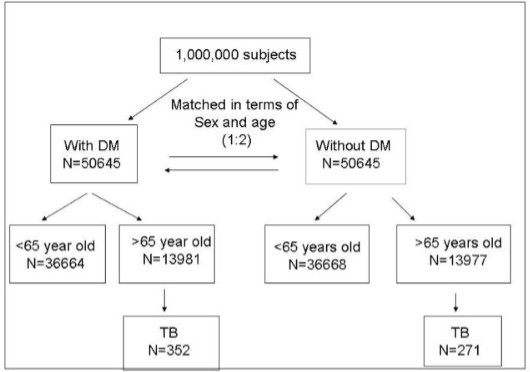