An adverse intrauterine environment, induced by a chromium-restricted diet, is a potential cause of metabolic disease in adult life. Up to now, the relative mechanism has not been clear. C57BL female mice were time-mated and fed either a control diet (CD), or a chromium-restricted diet (CR) throughout pregnancy and the lactation period. After weaning, some offspring continued the diet diagram (CD-CD or CR-CR), while other offspring were transferred to another diet diagram (CD-CR or CR-CD). At 32 weeks of age, glucose metabolism parameters were measured, and the liver from CR-CD group and CD-CD group was analyzed using a gene array. Quantitative real-time polymerase chain reaction (qPCR) and Western blot were used to verify the result of the gene array. A maternal chromium-restricted diet resulted in obesity, hyperglycemia, hyperinsulinemia, increased area under the curve (AUC) of glucose in oral glucose tolerance testing and homeostasis model assessment of insulin resistance (HOMA-IR). There were 463 genes that differed significantly (>1.5-fold change, p < 0.05) between CR-CD offspring (264 up-regulated genes, 199 down-regulated genes) and control offspring. The Kyoto Encyclopedia of Genes and Genomes (KEGG) pathway and STRING (Search Tool for the Retrieval of Interacting Genes/Proteins) analysis revealed that the insulin signaling pathway and Wnt signaling pathway were in the center of the gene network. Our study provides the first evidence that maternal chromium deficiency influences glucose metabolism in pups through the regulation of insulin signaling and Wnt signaling pathways. View Full-Text
Keywords: development programming; gene expression; glucose metabolism; insulin signaling pathway; Wnt pathway development programming; gene expression; glucose metabolism; insulin signaling pathway; Wnt pathway
►▼ Show Figures 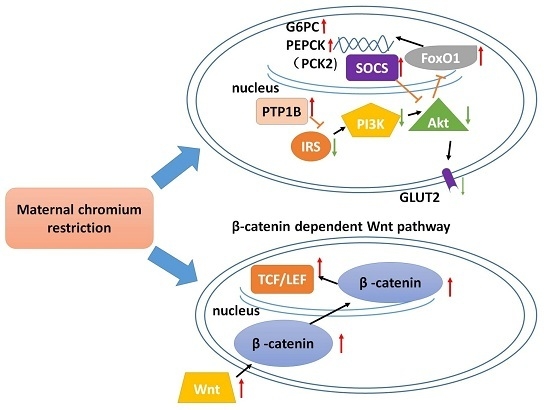