We have previously demonstrated that Phoneutria nigriventer venom (PNV) causes blood–brain barrier (BBB) breakdown, swelling of astrocytes end-feet and fluid permeation into brain interstitium in rats. Caveolae and water channels respond to BBB alterations by co-participation in shear stress response and edema formation/resolution. Herein, we showed post-natal developmental-related changes of two BBB-associated transporter proteins: the endothelial caveolin-1 (Cav-1), the major scaffolding protein from caveolae frame, and the astroglial aquaporin-4 (AQP4), the main water channel protein expressed in astrocytic peri-vascular end-feet processes, in the hippocampus of rats intraperitoneally-administered PNV. Western blotting protein levels; immunohistochemistry (IHC) protein distribution in CA1, CA2, and CA3 subfields; and gene expression by Real Time-Polymerase Chain Reaction (qPCR) were assessed in post-natal Day 14 (P14) and 8–10-week-old rats over critical periods of envenomation. The intensity and duration of the toxic manifestations indicate P14 neonate rats more vulnerable to PNV than adults. Histologically, the capillaries of P14 and 8–10-week-old rats treated with PNV showed perivascular edema, while controls did not. The intensity of the toxic manifestations in P14 decreases temporally (2 > 5 > 24 h), while inversely the expression of AQP4 and Cav-1 peaked at 24 h when clinically PNV-treated animals do not differ from saline controls. IHC of AQP4 revealed that hippocampal CA1 showed the least expression at 2 h when toxic manifestation was maximal. Subfield IHC quantification revealed that in P14 rats Cav-1 peaked at 24 h when toxic manifestations were absent, whereas in 8–10-week-old rats Cav-1 peaked at 2 h when toxic signs were highest, and progressively attenuated such increases until 24 h, remaining though significantly above baseline. Considering astrocyte-endothelial physical and functional interactions, we hypothesize that age-related modulations of AQP4 and Cav-1 might be linked both to changes in functional properties of astrocytes during post-natal development and in the BBB breakdown induced by the venom of P. nigriventer. View Full-Text
Keywords: caveolin-1; aquaporins; hippocampus; spider venom caveolin-1; aquaporins; hippocampus; spider venom
►▼ Show Figures 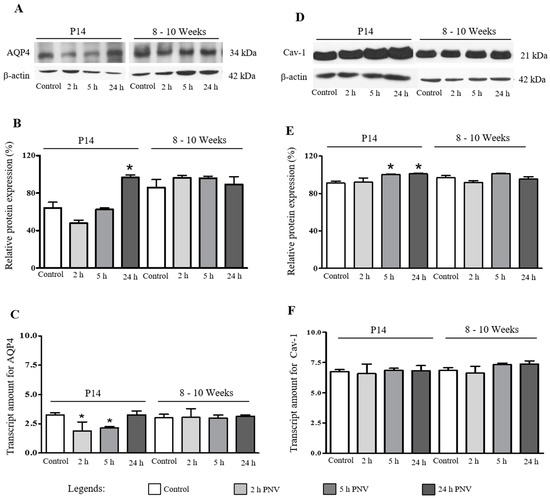