Nitrogen (N) is an important macronutrient for plant growth and development, but the regulatory mechanism of volatile compounds in response to N deficiency is not well understood, especially in cucumber, which consumes excessive N during growth. In this study, the major volatile compounds from cucumber leaves subjected to N deficiency were analyzed by GC-MS. A total of 24 volatile components were identified including 15 aldehydes, two ketones, two alkenes, and five other volatile compounds in 9930 leaves. Principal component analysis using volatile compounds from cucumber leaves provided good separation between N-sufficient and N-deficient treatments. The main volatiles in cucumber leaves were found to be C6 and C9 aldehydes, especially (E)-2-hexanal and (E,Z)-2,6-nonadienal. (E)-2-hexanal belonged to the C6 aldehyde and was the most abundant compound, whereas (E,Z)-2,6-nonadienal was the chief component of C9 aldehydes. During N-deficient treatment, short-chain volatile content was significantly improved at 5 day, other volatiles displayed significant reduction or no significantly changes in all sampling points. Improvement of short-chain volatiles was confirmed in the six other inbred lines at 5 day after N-deficient treatments. The expression analysis of 12 cucumber LOX genes and two HPL genes revealed that CsLOX19, CsLOX20, and CsLOX22 had common up-regulated expression patterns in response to N-deficient stress in most inbred lines; meanwhile, most sample points of CsHPL1 also had significant up-regulated expression patterns. This research focused on the relationship between volatiles in cucumber and different nitrogen environments to provide valuable insight into the effect of cultivation and management of the quality of cucumber and contributes to further research on volatile metabolism in cucumber. View Full-Text
Keywords: nitrogen deficiency; cucumber; leaf volatile; aldehyde; LOX-HPL pathways nitrogen deficiency; cucumber; leaf volatile; aldehyde; LOX-HPL pathways
►▼ Show Figures 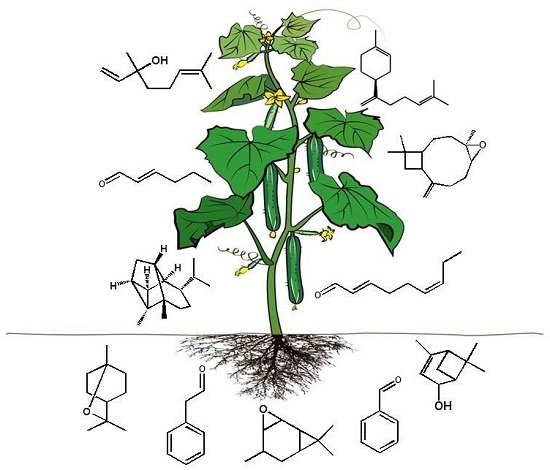