Melatonin as a Potential Agent in the Treatment of Sarcopenia

Mitochondria are important organelles in eukaryotes. They are referred to as the powerhouse of the cell since adenosine triphosphate (ATP), a source of chemical energy that sustains the biological activities and development of the cells, is mainly generated by mitochondria. Based on the endosymbiotic theory proposed by Sagan [1], mitochondria are probably derived from primitive photosynthetic bacteria. When a relatively large protoeukaryotic cell engulfed a smaller photosynthetic bacterium, the host cell did not digest it, but the photosynthetic bacterium parasitized the host. The host provided ample resources, such as carbohydrates and amino acids, to the parasitic bacterium; in turn, the bacterium rewarded the host with more ATP. Thus, they were mutually beneficial. During evolution, the parasitic bacterium evolved to be the mitochondrion and become an essential organelle of the host cell. The bacterial characteristics of mitochondria appear to be partially preserved. For example, they still retain bacterial cyclic DNA. In addition, mitochondria and mitochondrial DNA can be horizontally transferred from cell to cell in mammalian cell culture systems and in plants [2,3,4]. There is, however, no definitive evidence to show whether this mitochondrial movement occurs in vivo in animals. The intercellular mitochondrial transfer should be considered a fundamental physiological process with a role in development and tissue homeostasis. Mitochondria are multifunctional organelles. They contribute to cellular calcium homeostasis, trigger apoptosis, and regulate cellular metabolism [5,6,7,8]. However, the primary function of mitochondria is to generate ATP to power cells.
During ATP production, the electrons captured by the electron transporters including the coenzyme Q (CoQ) and cytochrome C eventually are transported to oxygen to form water. This process occurs in the electron transport chain (ETC) localized in the inner membrane of the mitochondria. Some electrons inevitably leak from the ETC and incompletely reduce oxygen to form free radicals, mainly the superoxide anion (O2•−). O2•− is an essential signaling molecule for cellular functions [9,10]. However, its excessive production results in oxidative stress and cellular injury, which may lead to cell death. O2•− can be autodismutated or via dismutase to form hydrogen peroxide (H2O2). H2O2 has a much longer half-life than that of O2•−. This allows H2O2 to diffuse to other cellular compartments to induce wide ranging oxidative stress [11]. The worst case is the homolysis of H2O2 (such as in the Fenton or Haber–Weiss reactions) to generate the hydroxyl radical (HO•); this is the most reactive and disreputable free radical [12]. There is no enzyme to detoxify HO• since its turnover rate is in the nanosecond range. As a result, it injures macromolecules including lipids, proteins, DNA, and carbohydrates in its vicinity [13,14].
O2•−, H2O2, HO• and other oxygen-related species are collectively referred to as the reactive oxygen species (ROS); when nitrogen is involved, such as nitric oxide (NO•) and peroxynitrite (ONOO−), they are called reactive nitrogen species (RNS). Fortunately, cells have developed strategies to protect against oxidative stress induced by both ROS and RNS [15,16]. One of the mechanisms involves melatonin. Melatonin is classified as a potent free radical scavenger and a mitochondrial-targeted antioxidant [17,18,19,20]. Melatonin scavenges a broad spectrum of ROS and RNS, especially, the HO• [21,22,23]. High levels of melatonin compared to other cellular compartments have been identified in mitochondria [24,25,26,27,28]. A variety of in vitro and in vivo studies have proven that melatonin targets mitochondria to reduce oxidative stress [29,30,31,32,33,34,35,36]. This results in decreased apoptosis, improved metabolic status, and an elevated survival rate of cultured cells, unicellular organisms, animals, and plants, which suffer with oxidative stress [37,38,39,40,41,42,43,44,45]. The mechanisms of melatonin as a mitochondrial protector not only relate to its excellent free radical scavenging capacity but also to its function as a signaling molecule to upregulate gene expression of antioxidant enzymes [46,47,48] and a spectrum of stress responsive genes [49,50,51,52,53,54,55,56]. In addition, melatonin acts on the mitochondrial specific proteins such as uncoupling proteins (UCPs) to dissipate the proton gradient across the inner membrane of the mitochondria to moderately reduce the inner membrane potential [57,58,59,60]. The relative lowering of the inner membrane potential significantly increases the activities of complex I and III, and accelerates electron transport through the ETC. These changes decrease electron leak from the ETC and reduce free radical formation. This is referred to as the free radical avoidance reaction of melatonin [61]. Not only melatonin per se but several of its metabolites including 2-hydroxylmelatonin, 6-hydroxylmelatonin, cyclic 3-hydroxymelatonin, N1-acetyl-N2-fomyl-5-methoxykynuramine (AFMK), and N1-acetyl-5-methoxykynuramine (AMK) are also antioxidants [20,62,63,64,65,66,67,68]. Cyclic 3-hydroxymelatonin and AMK were reported to be more potent than melatonin toward their reaction with ROS [69,70,71,72,73].
In plants, 2-hydroxymelatonin is a major melatonin metabolite, and its level is two orders of magnitude higher than that of melatonin [74]. This metabolite may have greater efficiency to reduce plant abiotic stress than that of melatonin [75]. This phenomenon may also exist in animals [76]. The continuous free radical scavenging activities of melatonin and its metabolites are referred to as a free radical scavenging cascade reaction [15,77]. The cascade reaction of melatonin renders it an excellent antioxidant. Herein, the potential association of melatonin with mitochondria is considered.

2. Mitochondria: The Major Sites for Melatonin Synthesis and Metabolism

3. Melatonin: A Potent Protector of Mitochondria

Mitochondria are important organelles. They not only provide the chemical energy to power the cell, but also regulate cellular homeostasis of calcium, apoptosis, and cellular metabolism. Preservation of the structural and functional integrity of mitochondria is essential for a healthy cell. One of the mitochondrial-targeted molecules is melatonin. Melatonin may be synthesized by mitochondria, a capacity that was inherited from bacteria, the precursors of mitochondria. As a result, all cells with mitochondria likely have the capacity to produce melatonin. This is strongly supported by the observations that the products of AANAT are exclusively located in mitochondria of pinealocytes, the AANAT/SNAT has been identified in the mitochondria of oocytes and the suitable substrate (acetyl CoA) availability for AANAT in mitochondria. In addition, the high level of melatonin is detected in the medium of cultured mitochondria. The protective effects of melatonin on mitochondria depend on its accumulation in these organelles. To achieve this, it requires an active melatonin transport against a concentration gradient. Melatonin mitochondrial carriers have been reported recently, and their levels in mitochondria were positively associated with mitochondrial melatonin concentration. An important protective mechanism of melatonin on mitochondria is that melatonin influences the mitochondrial membrane potential (Δψ). Melatonin blocks MPTP to preserve the Δψ under stressful conditions and activates the UCPs to slightly reduce the Δψ in normal condition. These activities are not in conflict with each other. Blockage of MPTP prevents the Δψ collapse and cellular apoptosis. Activation of UCPs reduces ROS formation because a slight lowering of Δψ accelerates the electron transportation and reduces electron leakage. Activation of UCPs seems not to reduce ATP production as expected. A potential mechanism is that the fewer leaked electrons under the UCP activation contribute their energy to ATP production. A balanced Δψ is ideal for the function of mitochondria. The detailed information as to the mechanisms is summarized in Figure 4. In addition to mitochondrial protection, melatonin also influences mitochondrial dynamics. The daily oscillations of mitochondrial functions as well as the morphology seem to fit well with the melatonin circadian rhythm. Melatonin reduces mitochondrial fission and increases their fusion, thereby preserving their normal function. Recently, it has been reported that melatonin modified mitophagy by either the enhancement or the reduction of this process, depending on conditions and cell types. The exact mechanisms require further investigation. 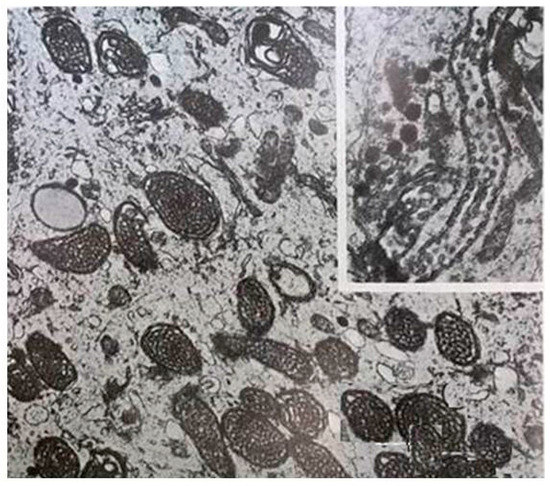 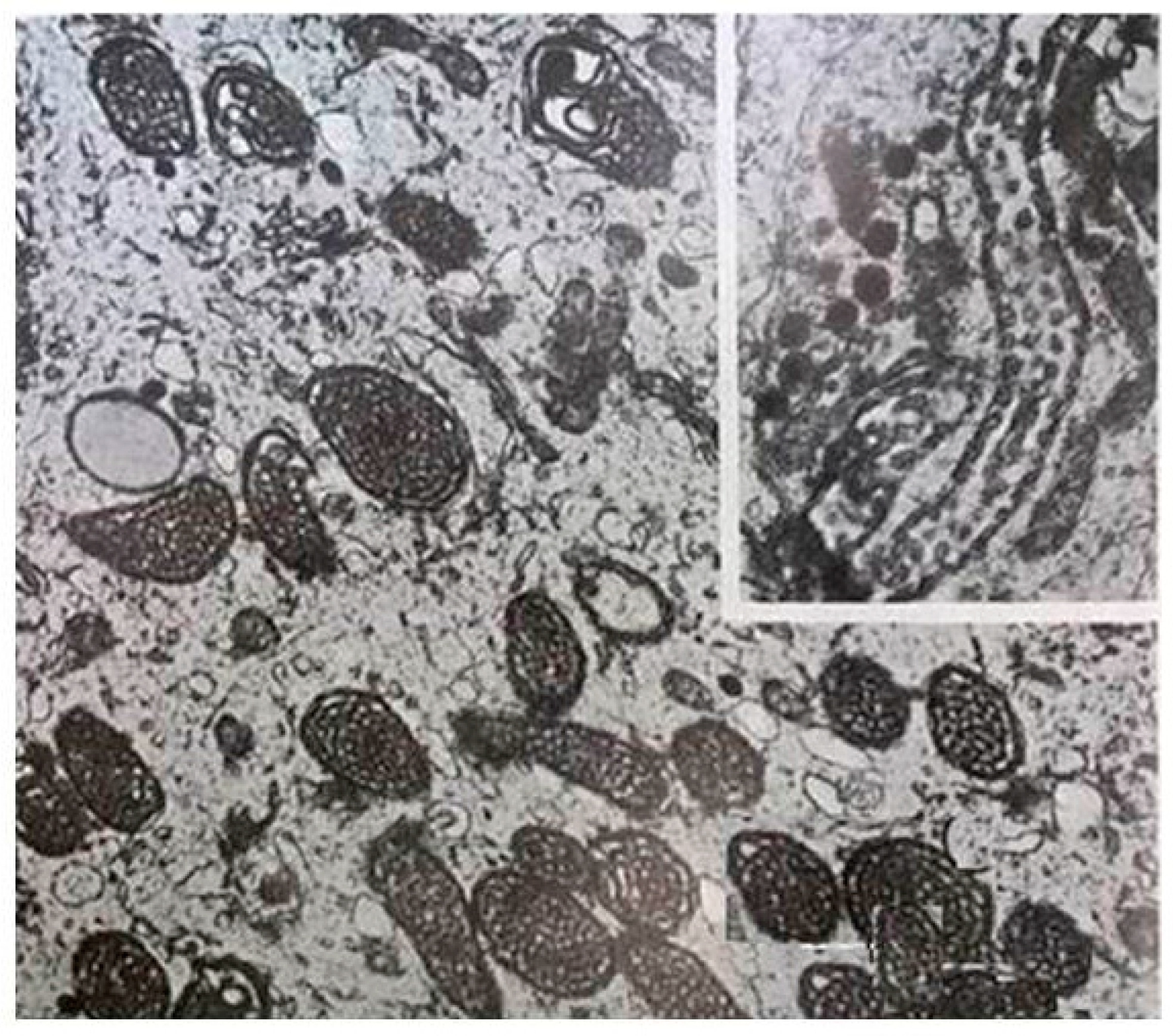 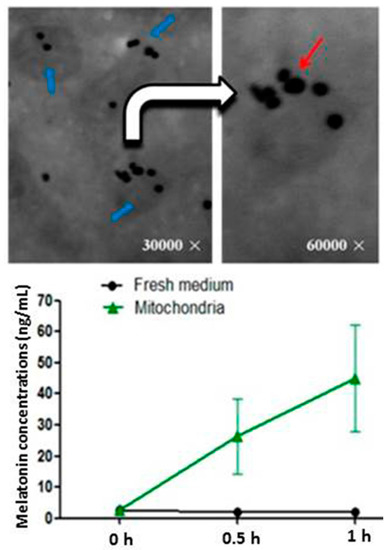 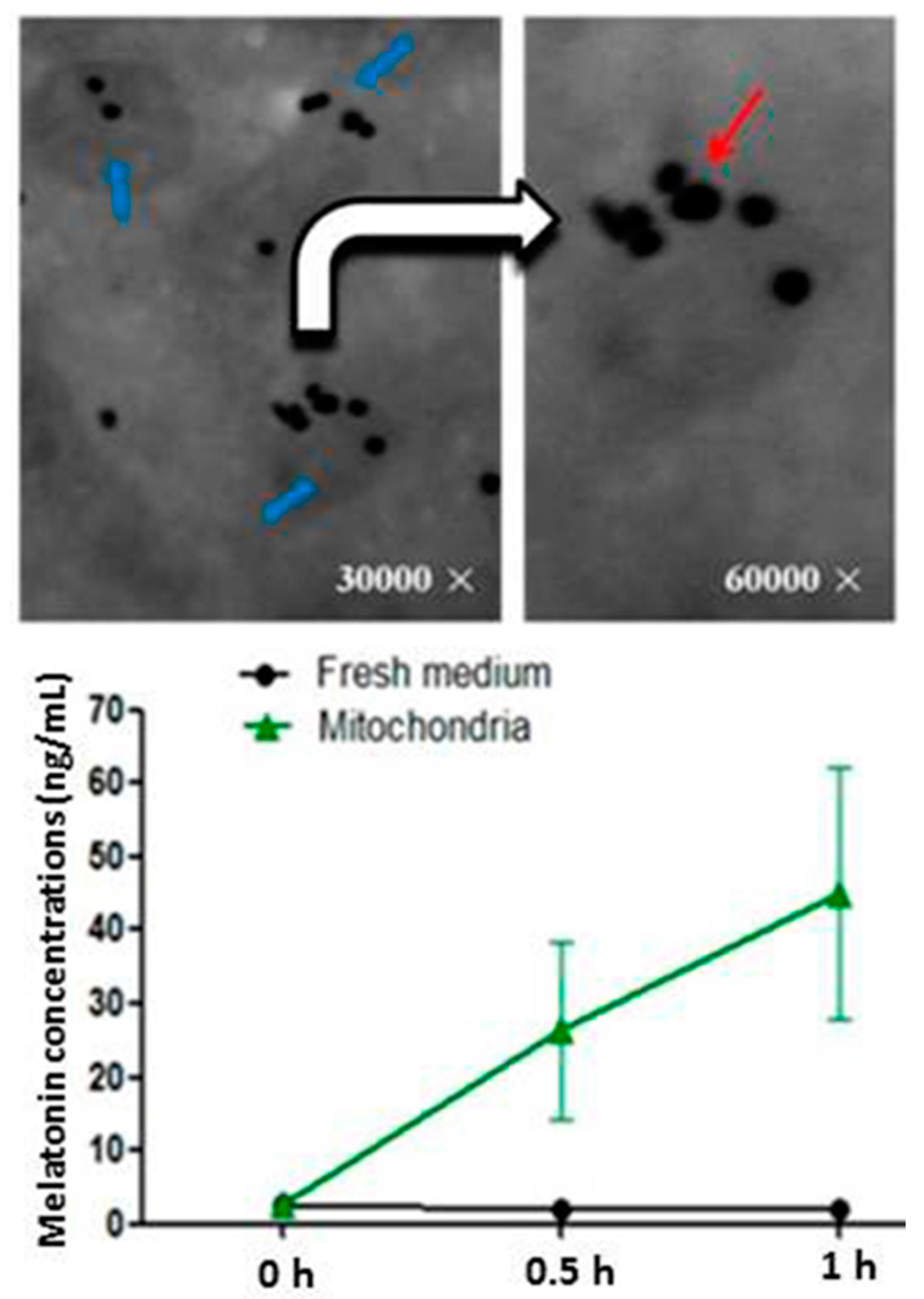 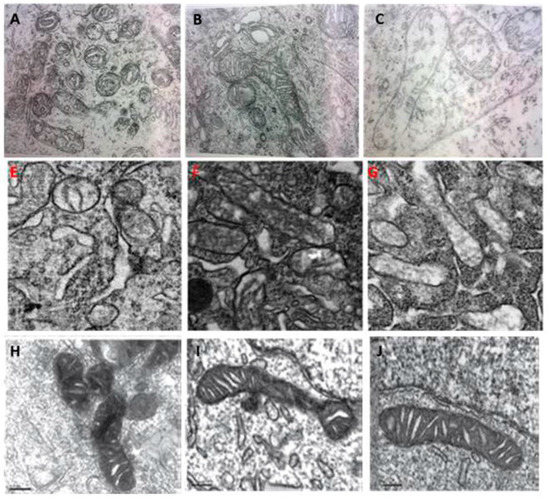 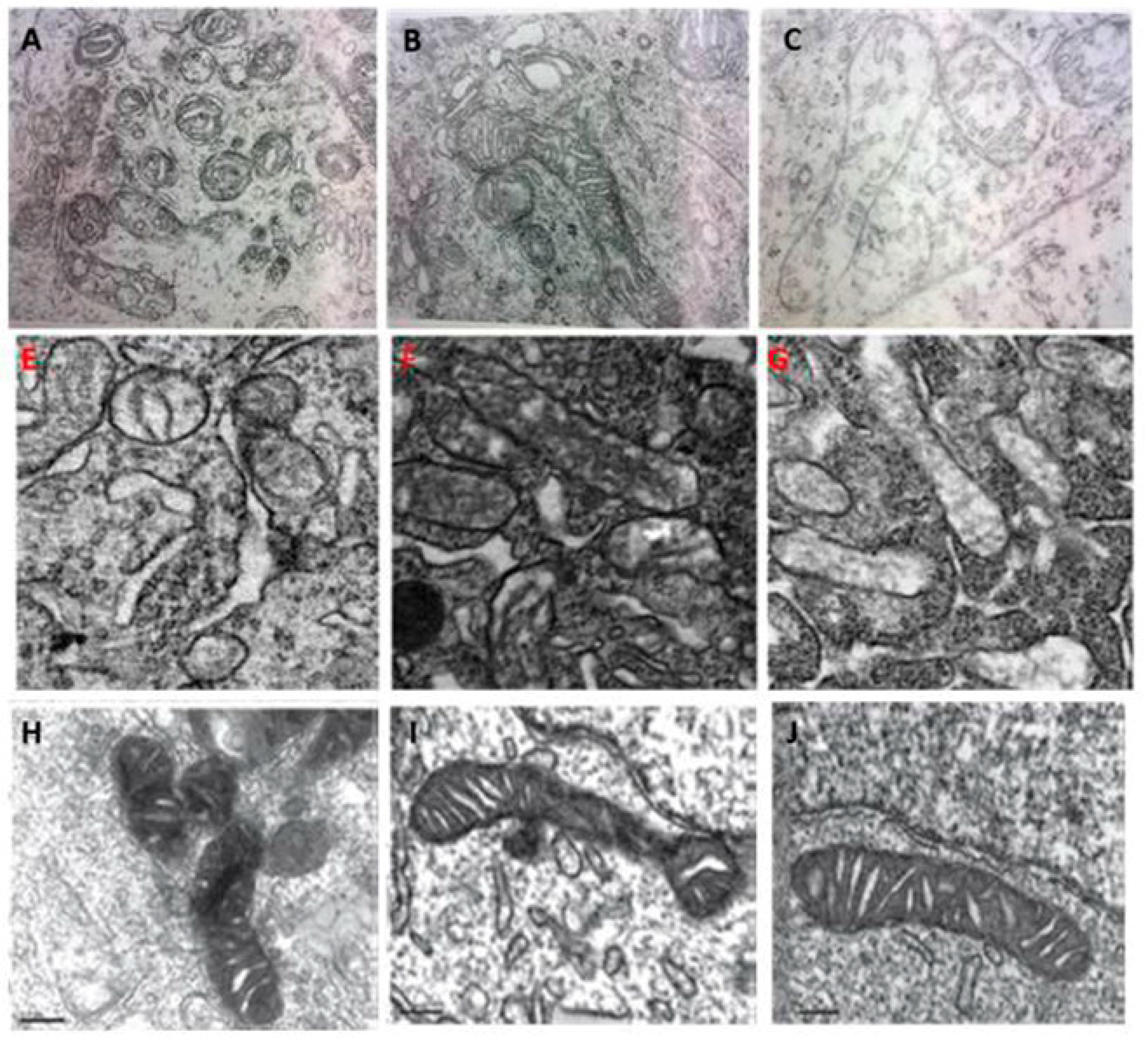 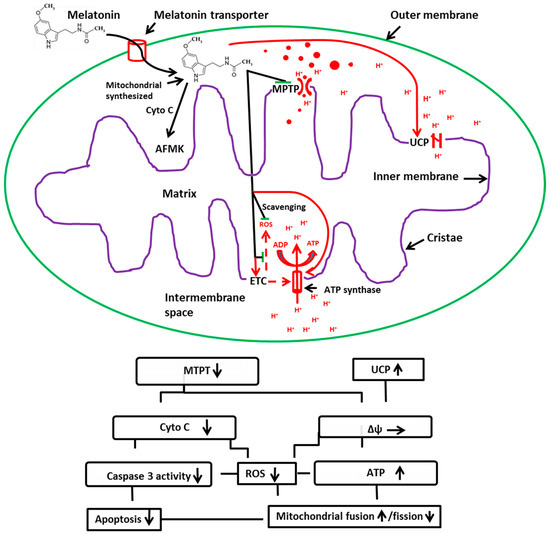 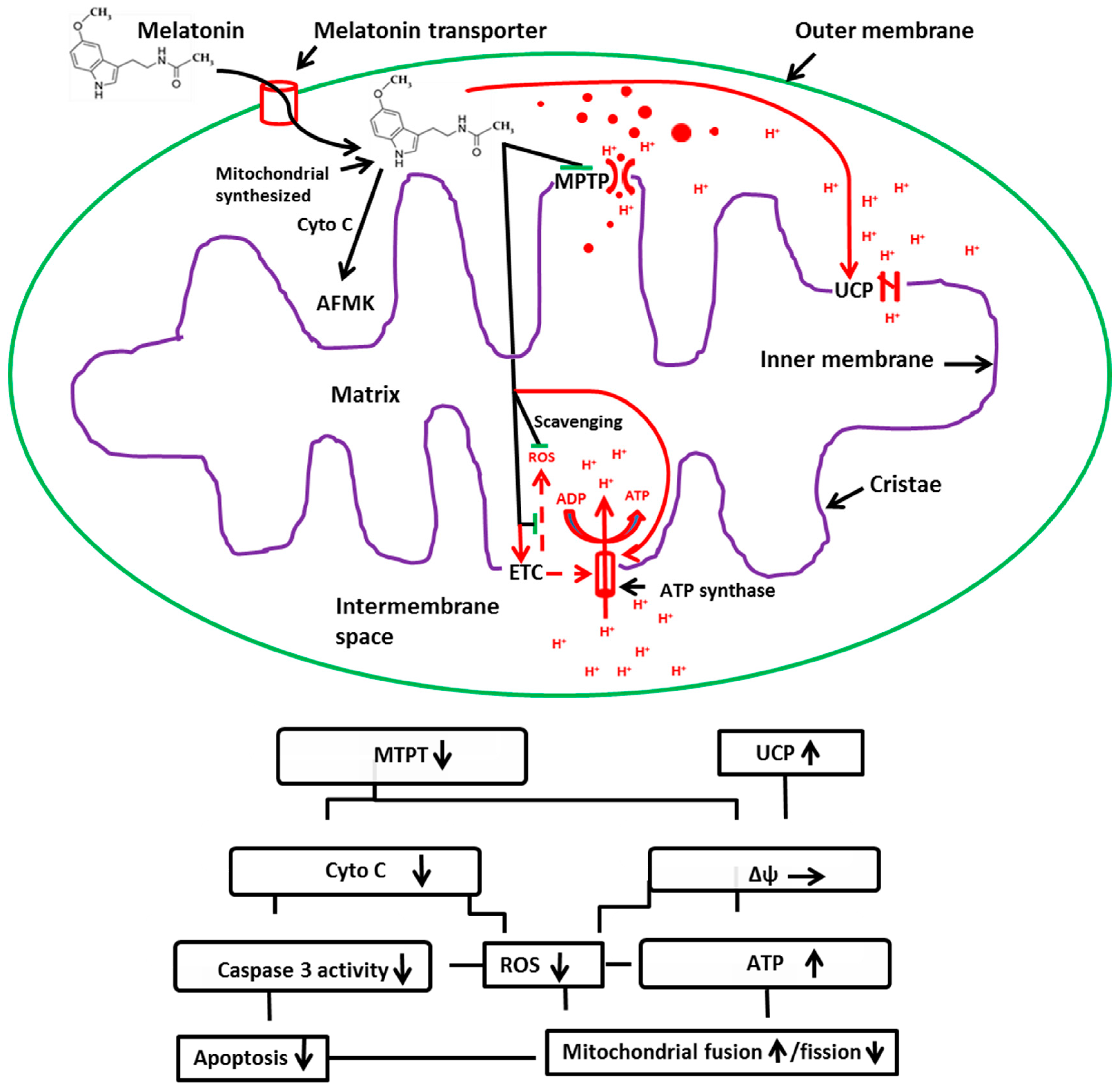