Myrosinases are β-thioglucoside glucohydrolases and serve as defense mechanisms against insect pests and pathogens by producing toxic compounds. AtTGG6 in Arabidopsis thaliana was previously reported to be a myrosinase pseudogene but specifically expressed in pollen. However, we found that AlTGG6, an ortholog to AtTGG6 in A. lyrata (an outcrossing relative of A. thaliana) was functional, suggesting that functional AtTGG6 alleles may still exist in A. thaliana. AtTGG6 alleles in 29 A. thaliana ecotypes were cloned and sequenced. Results indicate that ten alleles were functional and encoded Myr II type myrosinase of 512 amino acids, and myrosinase activity was confirmed by overexpressing AtTGG6 in Pichia pastoris. However, the 19 other ecotypes had disabled alleles with highly polymorphic frame-shift mutations and diversified sequences. Thirteen frame-shift mutation types were identified, which occurred independently many times in the evolutionary history within a few thousand years. The functional allele was expressed specifically in pollen similar to the disabled alleles but at a higher expression level, suggesting its role in defense of pollen against insect pests such as pollen beetles. However, the defense function may have become less critical after A. thaliana evolved to self-fertilization, and thus resulted in loss of function in most ecotypes. View Full-Text
Keywords: myrosinase; β-thioglucosidase; AtTGG6; AlTGG6; evolution; pollen specific; frame-shift mutation myrosinase; β-thioglucosidase; AtTGG6; AlTGG6; evolution; pollen specific; frame-shift mutation
►▼ Show Figures 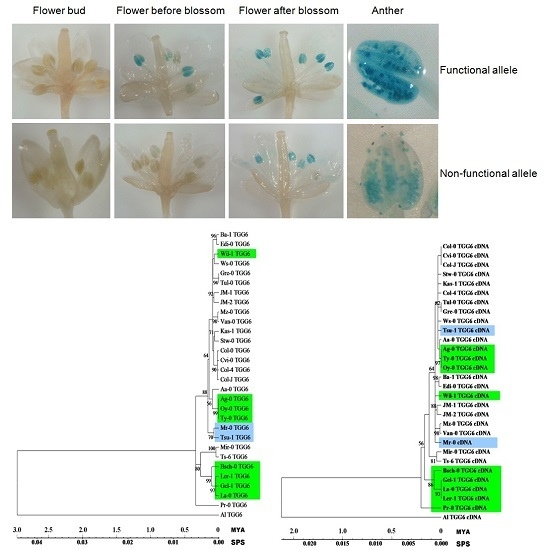