Structurally similar double-point modified analogues of 1,25-dihydroxyvitamin D2 (1,25D2) were screened in vitro for their pro-differentiating activity against the promyeloid cell line HL60. Their affinities towards human full length vitamin D receptor (VDR) and metabolic stability against human vitamin D 24-hydroxylase (CYP24A1) were also tested. The analogues (PRI-1730, PRI-1731, PRI-1732, PRI-1733 and PRI-1734) contained 5,6-trans modification of the A-ring and of the triene system, additional hydroxyl or unsaturation at C-22 in the side chain and reversed absolute configuration (24-epi) at C-24 of 1,25D2. As presented in this paper, introduction of selected structural modifications simultaneously in two distinct parts of the vitamin D molecule resulted in a divergent group of analogues. Analogues showed lower VDR affinity in comparison to that of the parent hormones, 1,25D2 and 1,25D3, and they caused effective HL60 cell differentiation only at high concentrations of 100 nM and above. Unexpectedly, introducing of a 5,6-trans modification combined with C-22 hydroxyl and 24-epi configuration switched off entirely the cell differentiation activity of the analogue (PRI-1734). However, this analogue remained a moderate substrate for CYP24A1, as it was metabolized at 22%, compared to 35% for 1,25D2. Other analogues from this series were either less (12% for PRI-1731 and PRI-1733) or more (52% for PRI-1732) resistant to the enzymatic deactivation. Although the inactive analogue PRI-1734 failed to show VDR antagonism, when tested in HL60 cells, its structure might be a good starting point for our design of a vitamin D antagonist. View Full-Text
Keywords: vitamin D analogues; leukemia; receptor vitamin D analogues; leukemia; receptor
►▼ Show Figures 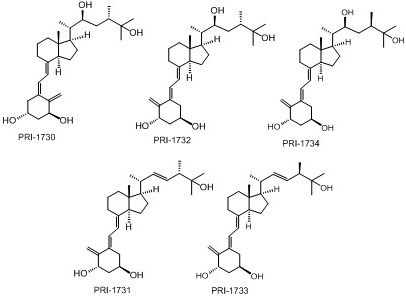