The Sox transcription factor family is characterized with the presence of a Sry-related high-mobility group (HMG) box and plays important roles in various biological processes in animals, including sex determination and differentiation, and the development of multiple organs. In this study, 27 Sox genes were identified in the genome of the Nile tilapia (Oreochromis niloticus), and were classified into seven groups. The members of each group of the tilapia Sox genes exhibited a relatively conserved exon-intron structure. Comparative analysis showed that the Sox gene family has undergone an expansion in tilapia and other teleost fishes following their whole genome duplication, and group K only exists in teleosts. Transcriptome-based analysis demonstrated that most of the tilapia Sox genes presented stage-specific and/or sex-dimorphic expressions during gonadal development, and six of the group B Sox genes were specifically expressed in the adult brain. Our results provide a better understanding of gene structure and spatio-temporal expression of the Sox gene family in tilapia, and will be useful for further deciphering the roles of the Sox genes during sex determination and gonadal development in teleosts. View Full-Text
Keywords: Nile tilapia; Sox gene; genomic structure; transcriptome; gene expression Nile tilapia; Sox gene; genomic structure; transcriptome; gene expression
►▼ Show Figures 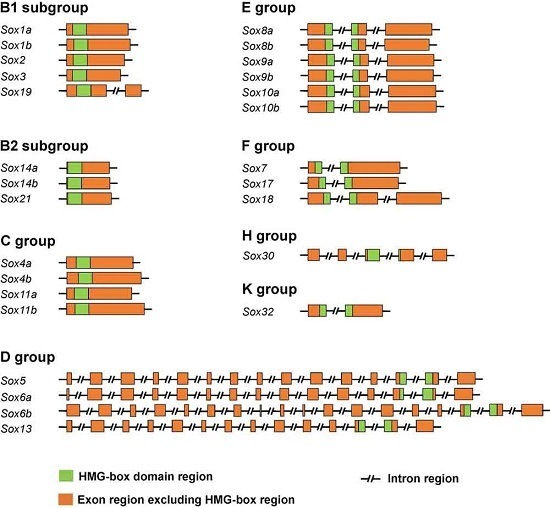