IgD is considered to be a recently-evolved Ig and a puzzling molecule, being previously found in all vertebrate taxa, except for birds. Although IgD likely plays an important role in vertebrate immune responses, the function of IgD in Nile tilapia (Oreochromis niloticus) is virtually unknown. In the present study, a membrane form of IgD (mIgD) heavy chains were cloned from the GIFT strain of Nile tilapia (designated On-mIgD). The On-mIgD heavy chain’s cDNA is composed of 3347 bp with a 31 bp of 5′-UTR, 3015 bp open reading frame (ORF) and 301 bp 3′-UTR, encoding a polypeptide of 1004 amino acids (GenBank accession no: KF530821). Phylogenetic analysis revealed that On-mIgD heavy chains showed the highest similarity to Siniperca chuatsi. Quantitative real-time PCR (qRT-PCR) analysis showed that On-mIgD expression occurred predominately in head kidney, thymus, spleen, and kidney. After Streptococcus agalactiae infection, transcripts of On-mIgD increased and reached its peak at 48 h in the head kidney and thymus, and 72 h in the spleen, respectively. Taken together, these results collectively indicated that IgD could possibly have a key role to play in the immune response when bacterial infections in Nile tilapia. View Full-Text
Keywords: Oreochromis niloticus; IgD; Streptococcus agalactiae; fluorescent quantitative real-time PCR Oreochromis niloticus; IgD; Streptococcus agalactiae; fluorescent quantitative real-time PCR
►▼ Show Figures 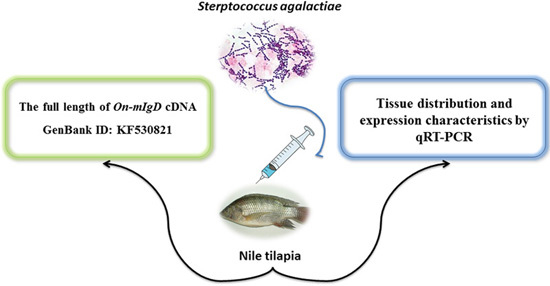