The Role of KV7.3 in Regulating Osteoblast Maturation and Mineralization
Next Article in Special Issue

The Chinese Honghe Autonomous Prefecture (Honghe) in Yunnan Province is a unique ethnic area because it is inhabited by more than ten different minority ethnic groups. Geographically, Honghe directly shares a border with Vietnam. The objective of this study was to investigate genetic diversity and distribution of the Hepatitis C virus (HCV) in Honghe. Ninety nine subjects who were infected with HCV or HCV/HIV (Human Immunodeficiency Virus Type 1) were recruited into this study. HCV genotypes and subtypes were determined based on the sequences of the core/envelope 1 (C/E1) and the nonstructural protein 5B (NS5B) genomic regions. The viral diversity and origins of dissemination were examined by phylogenetic analyses. Three HCV genotypes (1, 3 and 6) with six subtypes (1b, 3b, 3a, 6a, 6n and 6v) were identified. The most predominant form was genotype 3 (54.6%) followed by 6 (34.3%), and 1 (9.1%). The HCV subtype 3b appeared to be the most frequent form (38.4%) followed by 6n (20.2%) and 3a (16.2%). Statistical analyses suggested a possible rise of the genotype 6a in Honghe among intravenous drug users with HCV/HIV co-infections. Further phylogenetic analyses suggested that similar HCV-6a viruses might have been circulating in the Honghe area for more than a decade, which likely originated from Vietnam or vice versa. Two HCV samples with single HCV infection (SC34 and SC45) were isolated that could represent new recombinant variants. Although the genetic prevalence of HCV in Honghe is in general agreement with that of Southwest China and Yunnan Province, the diversity of HCV genotypes and subtypes in Honghe is somewhat unique and evolving. Information presented here should provide useful information for future health surveillance and prevention of HCV infection in this area. View Full-Text
Keywords: HCV; genotype; subtype; phylogenetic analysis; diversity; Honghe Autonomous Prefecture; Yunnan; China HCV; genotype; subtype; phylogenetic analysis; diversity; Honghe Autonomous Prefecture; Yunnan; China
►▼ Show Figures 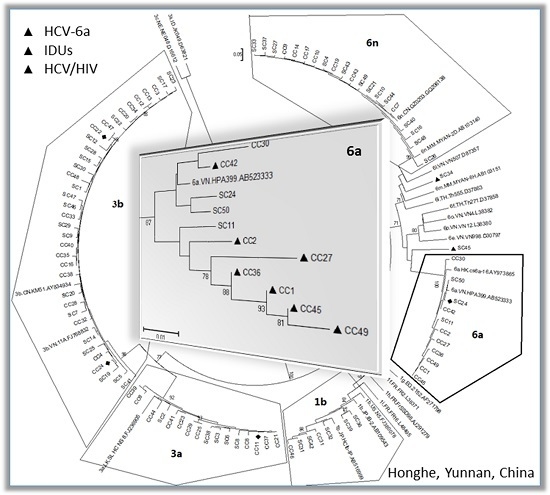