The Isolation of DNA by Polycharged Magnetic Particles: An Analysis of the Interaction by Zeta Potential and Particle Size

Prostate cancer (PCa) is a malignant tumor for which there are no effective treatment strategies. In this study, we developed a targeted strategy for prostate-specific membrane-antigen (PSMA)-positive PCa in vitro based on 2-(3-((S)-5-amino-1-carboxypentyl)ureido) pentanedioic acid (ACUPA) modified polyethylene glycol (PEG)-Cholesterol micelles containing wogonin (WOG), which was named ACUPA-M-WOG. ACUPA-M-WOG was conventionally prepared using a self-assembling method, which produced stable particle size and ζ potential. Moreover, ACUPA-M-WOG showed good drug encapsulating capacity and drug release profiles. Fluorescence activated cell sorting (FACS) results suggested that ACUPA modified PEG-Cholesterol micelles could effectively enhance the drug uptake on PSMA(+) PCa cells, and the cytotoxicity of ACUPA-M-WOG was stronger than other controls according to in vitro cellular proliferation and apoptosis assays, separately through methyl thiazolyl tetrazolium (MTT) and Annexin V/Propidium Iodide (PI) staining. Finally, the molecular mechanisms of ACUPA-M-WOG’s effects on human PSMA(+) PCa were investigated, and were mainly the intrinsic or extrinsic apoptosis signaling pathways. The Western blot results suggested that ACUPA-M-WOG could enhance the WOG-induced apoptosis, which was mainly via the intrinsic signaling pathway rather than the extrinsic signaling pathway. In conclusion, ACUPA-M-WOG was successfully developed for WOG-selective delivery to PSMA(+) PCa cells and had stronger inhibition than free drugs, which might make it an effective strategy for PSMA(+) PCa. View Full-Text
Keywords: prostate specific membrane-antigen; wogonin; prostate cancer; apoptosis prostate specific membrane-antigen; wogonin; prostate cancer; apoptosis
►▼ Show Figures 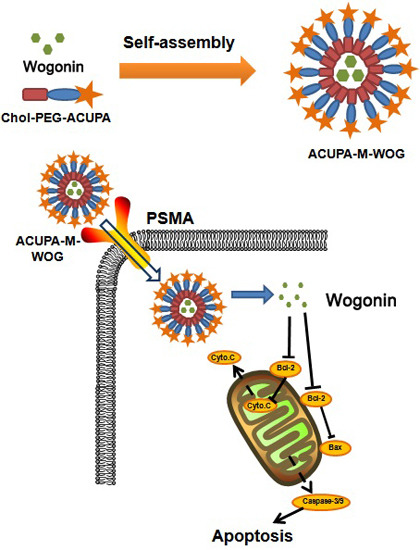