Ribonuclease 1 (RNase1) is an important digestive enzyme that has been used to study the molecular evolutionary and plant-feeding adaptation of mammals. However, the expression patterns and potential biological function of RNase1 in herbivorous fish is not known. Here, we identified RNase1 from five fish species and illuminated the functional diversification and expression of RNase1 in herbivorous Megalobrama amblycephala. The five identified fish RNase1 genes all have the signature motifs of the RNase A superfamily. No expression of Ma-RNase1 was detected in early developmental stages but a weak expression was detected at 120 and 144 hours post-fertilization (hpf). Ma-RNase1 was only expressed in the liver and heart of one-year-old fish but strongly expressed in the liver, spleen, gut, kidney and testis of two-year-old fish. Moreover, the immunostaining localized RNase1 production to multiple tissues of two-year-old fish. A biological functional analysis of the recombinant protein demonstrated that M. amblycephala RNase1 had a relatively strong ribonuclease activity at its optimal pH 6.1, which is consistent with the pH of its intestinal microenvironment. Collectively, these results clearly show that Ma-RNase1 protein has ribonuclease activity and the expression patterns of Ma-RNase1 are dramatically different in one year and two-year-old fish, suggesting the functional differentiation during fish growing. View Full-Text
Keywords: RNase1; Megalobrama amblycephala; digestive enzyme; ribonuclease activity RNase1; Megalobrama amblycephala; digestive enzyme; ribonuclease activity
►▼ Show Figures 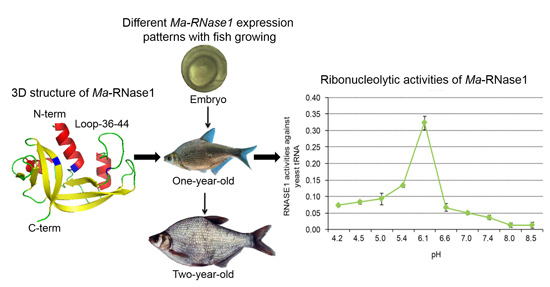