In normal cell physiology, programmed death 1 (PD-1) and its ligand, PD-L1, play an immunoregulatory role in T-cell activation, tolerance, and immune-mediated tissue damage. The PD-1/PD-L1 pathway also plays a critical role in immune escape of tumor cells and has been demonstrated to correlate with a poor prognosis of patients with several types of cancer. However, recent reports have revealed that the immunohistochemical (IHC) expression of the PD-L1 in tumor cells is not uniform for the use of different antibodies clones, with variable specificity, often doubtful topographical localization, and with a score not uniquely defined. The purpose of this study was to analyze the IHC expression of PD-L1 on a large series of several human tumors to correctly define its staining in different tumor tissues.
Keywords: PD-L1; immunohistochemical staining; tissue type’s variability PD-L1; immunohistochemical staining; tissue type’s variability

Programmed death 1 ligand (PD-1) is a 40 kDa transmembrane protein that is expressed on a large series of normal tissues including epithelial cells, vascular endothelial cells, natural killer cells, macrophages, myeloid dendritic cells and B cells [1]. During the normal cell physiology, programmed death 1 (PD-1) is activated by binding with two ligands, PD-L1 and PD-L2. The binding with PD-L1, expressed on the surface of activated cytotoxic T cells, inhibits Interleukin 2 (IL-2) production and T cell activation reducing phosphorylation of ZAP70 and PKC θ [2]. PD-1/PD-L1 interaction represents a crucial regulatory check against an enormous adoptive immune response to antigens and autoimmunity [3].
Expression of PD-L1 in donor tissue was essential for the prevention of chronic rejection in a heart transplant model [4] and in the support of tolerance at the utero–placental interface [5].
Several studies have recently shown that PD-1/PD-L1 pathway may have a key role in the interaction of tumor cells with host immune response, and tumor cells PD-L1 expression may function as a mechanism of adaptive immune resistance. PD-1 was detected in tumor-infiltrating lymphocytes (TILs), present in tumor microenvironment, and its aberrant expression was associated to a poor prognosis in several human tumors. Moreover, many human cancers, including stomach, breast, ovarian, renal, melanoma, pancreatic and lung cancers, have been shown to express PD-L1 and, in most of cases, its expression was correlated with a poor prognosis [6,7,8,9,10].
The correlation between PD-1/PD-L1 expression and worse patient outcomes supports the hypothesis that these molecules can represent potential prognostic biomarkers in many human solid tumors.
Early-phase trials using monoclonal antibodies targeting PD-1 or PD-L1 revealed a real efficacy in clinical response in patients with refractory tumors [11]. For this reason, many studies are also evaluating the predictive value of this marker, mainly through its detection with in situ methods, such as immunohistochemistry and mRNA in situ hybridization [12,13].
However, the data available in literature, related to the expression of PD-L1 in different tumor types, are not uniform and are often conflicting. This problem might be associated with the use of different antibodies clones, with variable specificity, and mainly with a score not uniquely defined.
Recently the FDA has approved several PD-L1 antibody clones for diagnostic use in Non-Small Cell Lung Cancer (NSCLC), but their validation on different tumor types and especially the definition of threshold in terms of the percentage of positive cells is still in progress [14].
For this reason, to reduce the subjectivity of the interpretation and in order to properly stratify patients to specific immunotherapies, the expression PD-L1 should be better explored in large series of human tumors also to define potential difference associated to different cell-types.
In this study we analyzed PD-L1 expression in a series of solid and hematological human neoplasm, such as breast, ovarian, colon, kidney, thyroid, lung, melanoma, sarcoma tumor and lymphomas, to define a standardized protocol for immunohistochemistry analysis and to establish the correct and specific evaluation parameters for different tumor types.

To realize our experimental purpose, we used one of the four antibody clones approved by FDA for PD-L1 immunohistochemical (IHC) detection, the Rabbit monoclonal antibody (mAb) Anti-PD-L1 (SP-142) clone. We tested it with different pre-treatments, antibody concentrations, and detection reagents to optimize the conditions to improve the performance of each antibody. The validation of PD-L1 staining was carried out on placenta tissues as positive control (Figure 1A) and on selected tumor samples (Figure 1B).
SP-142 Ab clone detected membrane isoforms of PD-L1. It was highly expressed in placenta cells and with a variable intensity in positive tumor cells.

Selected non-Hodgkin lymphoma samples showed a consistent expression of PD-L1 in 60%–70% of tumor samples with a clear incomplete (Figure 4A) and complete (Figure 4B) immunoreactivity of membrane in ≥10% of tumor cells.
All data of PD-L1 IHC staining criteria for each tumor type are schematized in Table 1.

One hundred eighty oncologic patients that underwent surgery at the National Cancer Institute “Giovanni Pascale Foundation” of Naples, Italy, were enrolled into this study. In detail, we selected 20 breast cancer, 20 ovarian cancer, 20 renal cancer, 20 colon cancer, 20 malignant melanoma, 20 lung cancer, 20 thyroid cancer and 20 sarcoma tumors, and 20 non-Hodgkin lymphoma. A placenta tissue sample was included in our series to perform PD-L1 staining.
All cases of tumor samples were reviewed according to specific World Health Organization (WHO) classification criteria, using standard tissue sections and appropriate immunohistochemical slides.
Medical records for all cases were reviewed for clinical information, including histologic parameters that were determined from the Hematoxylin & Eosin (H&E) slides. The following clinical and pathological parameters were evaluated for each tumor included in the study: patient age at initial diagnosis, tumor size, histologic subtype, histologic grade, nuclear grade, nodal status, number of positive lymph nodes, tumor stage, tumor recurrence or distant metastasis and type of surgery (for tumor removal).
In addition, all specimens were characterized for all routinely diagnostic immunophenotypic parameters.

A correct standardization of IHC protocols for the detection of PD-L1 in tumor cells in different cancer subtypes and a definition of an adequate cut-off in terms of percentage of positive cells will enable reevaluating the prognostic value of this marker, but especially highlighting its predictive value for the therapeutic stratification of cancer patients.
Unfortunately, preliminary data would seem to indicate that patients who can better benefit of from PD-1/PD-L1 therapy inhibitors are those with positive staining of PD-L1 on tumor cell surface [32]. Therefore, the validation of these data through standardized procedures is of crucial importance, since it would provide a precious predictive marker of response, currently not available for immune checkpoint inhibition. 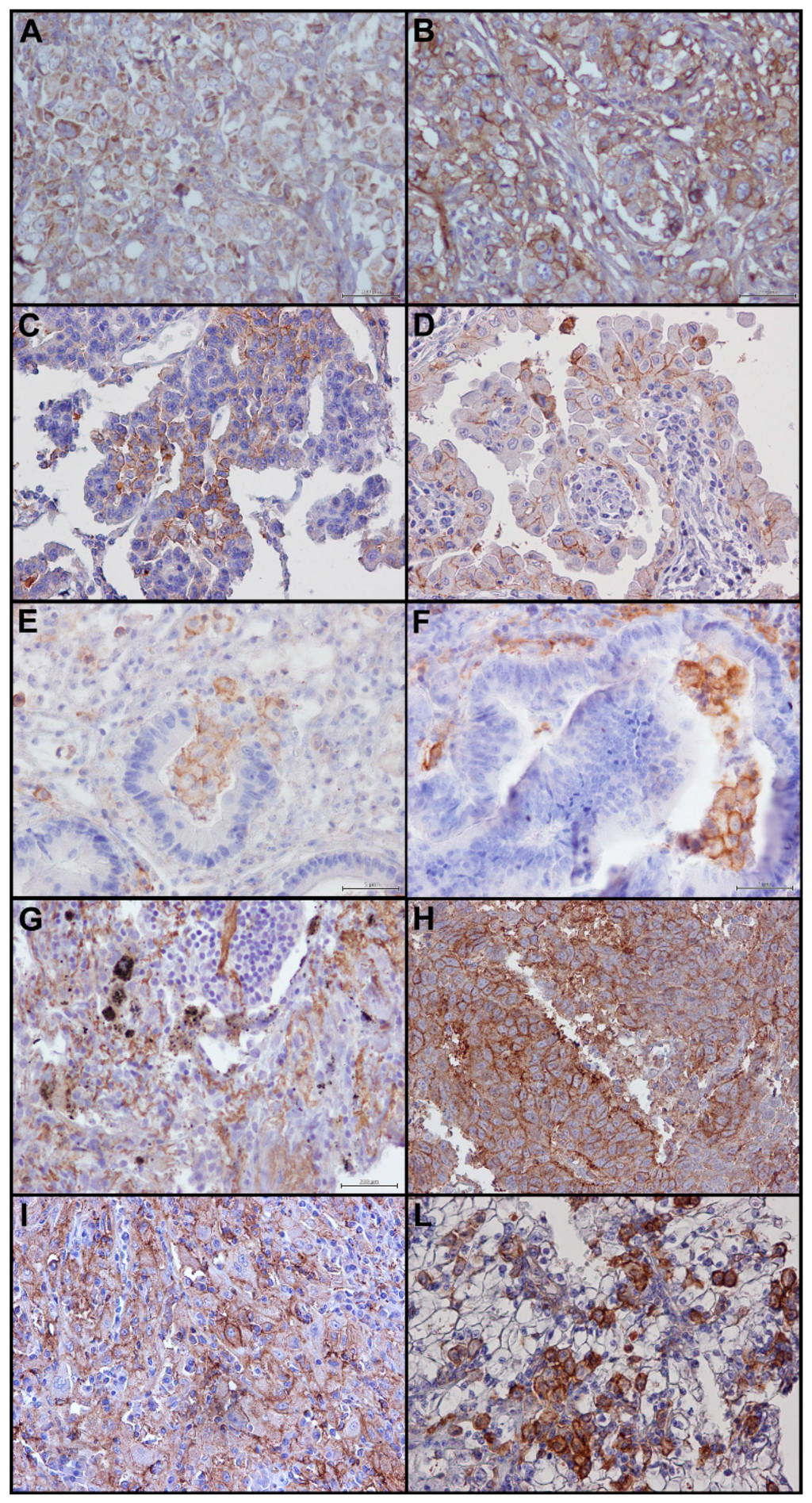 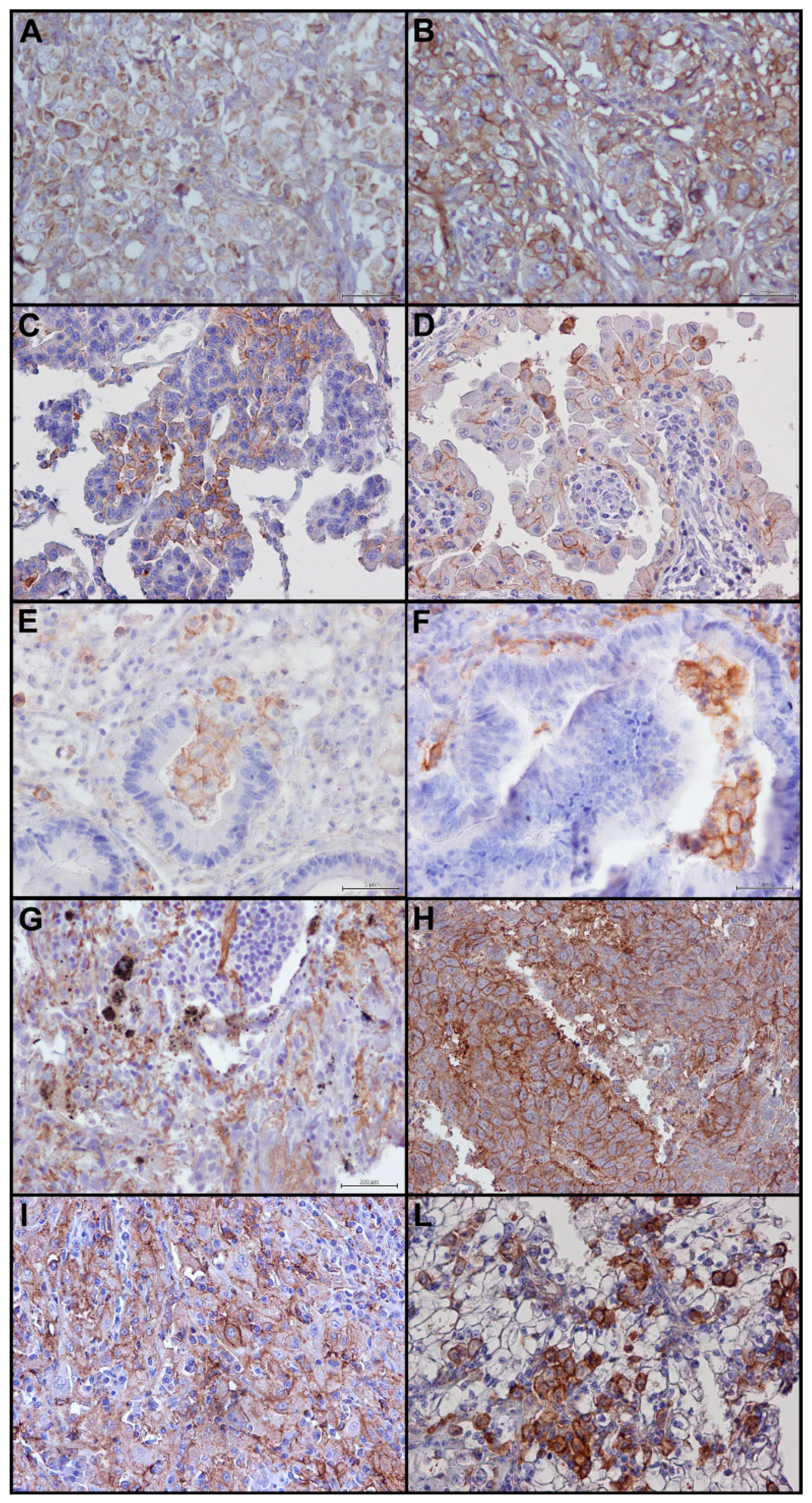