Prevalence and Predictors of Clozapine-Associated Constipation: A Systematic Review and Meta-Analysis
Next Article in Special Issue

In this study, we determined the host relationship of Agrotis ipsilon moths by identifying pollen species adhering them during their long-distance migration. Pollen carried by A. ipsilon moths was collected from 2012 to 2014 on a small island in the center of the Bohai Strait, which is a seasonal migration pathway of this pest species. Genomic DNA of single pollen grains was amplified by using whole genome amplification technology, and a portion of the chloroplast rbcL sequence was then amplified from this material. Pollen species were identified by a combination of DNA barcoding and pollen morphology. We found 28 species of pollen from 18 families on the tested moths, mainly from Angiosperm, Dicotyledoneae. From this, we were able to determine that these moths visit woody plants more than herbaceous plants that they carry more pollen in the early and late stages of the migration season, and that the amounts of pollen transportation were related to moth sex, moth body part, and plant species. In general, 31% of female and 26% of male moths were found to be carrying pollen. Amounts of pollen on the proboscis was higher for female than male moths, while the reverse was true for pollen loads on the antennae. This work provides a new approach to study the interactions between noctuid moth and their host plants. Identification of plant hosts for adult moths furthers understanding of the coevolution processes between moths and their host plants. View Full-Text
Keywords: Agrotis ipsilon; pollen; molecular identification; “insect-host plant” coevolution Agrotis ipsilon; pollen; molecular identification; “insect-host plant” coevolution
►▼ Show Figures 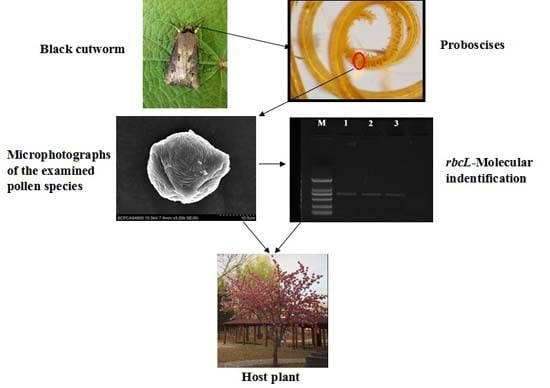