Antibacterial Activity of Juglone against Staphylococcus aureus: From Apparent to Proteomic
Next Article in Special Issue

Human Amylin, or islet amyloid polypeptide (hIAPP), is a small hormone secreted by pancreatic β-cells that forms aggregates under insulin deficiency metabolic conditions, and it constitutes a pathological hallmark of type II diabetes mellitus. In type II diabetes patients, amylin is abnormally increased, self-assembled into amyloid aggregates, and ultimately contributes to the apoptotic death of β-cells by mechanisms that are not completely understood. We have screened a library of approved drugs in order to identify inhibitors of amylin aggregation that could be used as tools to investigate the role of amylin aggregation in type II diabetes or as therapeutics in order to reduce β-cell damage. Interestingly, three of the compounds analyzed—benzbromarone, quercetin, and folic acid—are able to slow down amylin fiber formation according to Thioflavin T binding, turbidimetry, and Transmission Electron Microscopy assays. In addition to the in vitro assays, we have tested the effect of these compounds in an amyloid toxicity cell culture model and we have found that one of them, quercetin, has the ability to partly protect cultured pancreatic insulinoma cells from the cytotoxic effect of amylin. Our data suggests that quercetin can contribute to reduce oxidative damage in pancreatic insulinoma β cells by modulating the aggregation propensity of amylin. View Full-Text
Keywords: quercetin; benzbromarone; folic acid; amylin; amyloid; aggregation; type II diabetes quercetin; benzbromarone; folic acid; amylin; amyloid; aggregation; type II diabetes
►▼ Show Figures 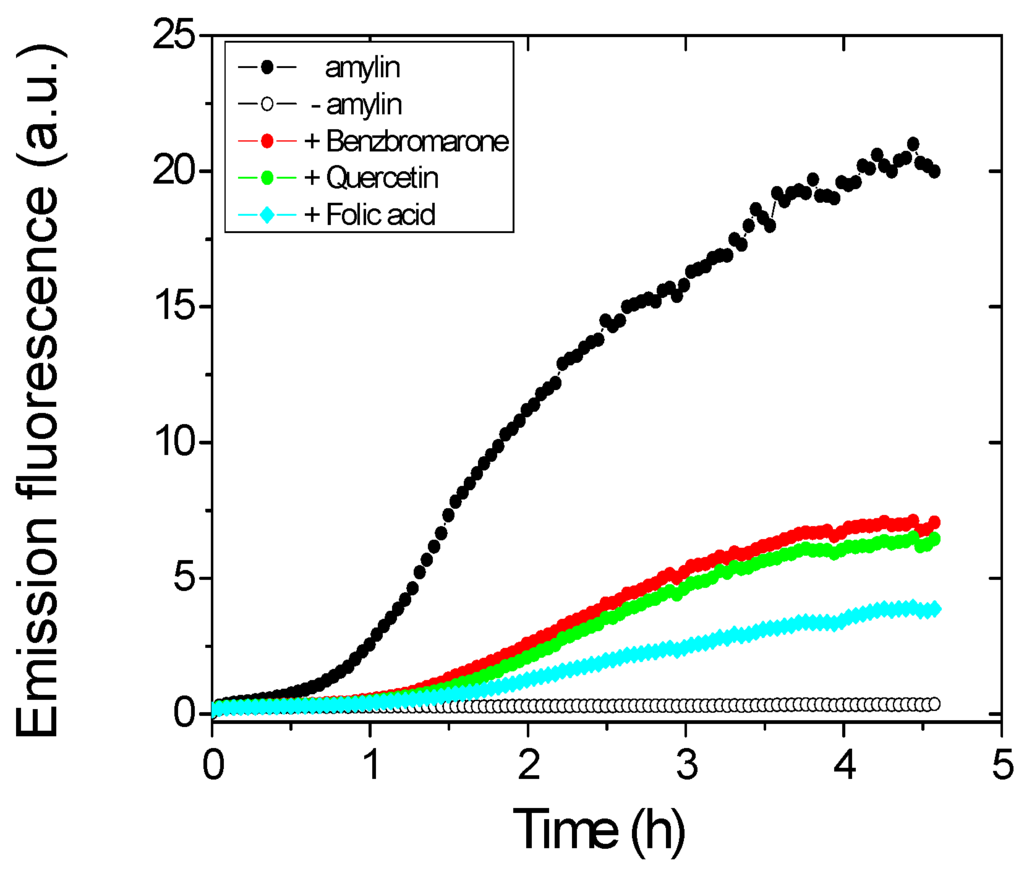