Bombus terrestris, commonly known as the buff-tailed bumblebee, is native to Europe, parts of Africa and Asia. It is commercially bred for use as a pollinator of greenhouse crops. Larvae pupate within a silken cocoon that they construct from proteins produced in modified salivary glands. The amino acid composition and protein structure of hand drawn B. terrestris, silk fibres was investigated through the use of micro-Raman spectroscopy. Spectra were obtained from single fibres drawn from the larvae salivary gland at a rate of 0.14 cm/s. Raman spectroscopy enabled the identification of poly(alanine), poly(alanine-glycine), phenylalanine, tryptophan, and methionine, which is consistent with the results of amino acid analysis. The dominant protein conformation was found to be coiled coil (73%) while the β-sheet content of 10% is, as expected, lower than those reported for hornets and ants. Polarized Raman spectra revealed that the coiled coils were highly aligned along the fibre axis while the β-sheet and random coil components had their peptide carbonyl groups roughly perpendicular to the fibre axis. The protein orientation distribution is compared to those of other natural and recombinant silks. A structural model for the B. terrestris silk fibre is proposed based on these results. View Full-Text
Keywords: silk; protein conformation; protein orientation; Raman spectroscopy; Bombus terrestris; coiled coil; fibre silk; protein conformation; protein orientation; Raman spectroscopy; Bombus terrestris; coiled coil; fibre
►▼ Show Figures 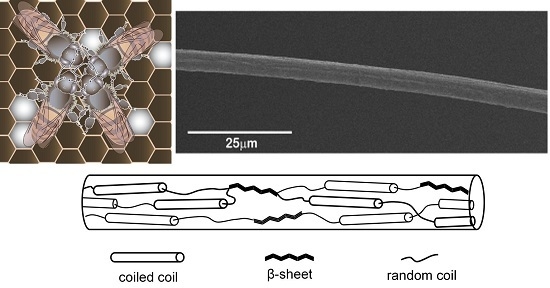