Coronary artery disease (CAD), the most common cause of death, is characterized by the stenosis or occlusions of coronary arteries that are mostly caused by the progressive deposition of lipids and fibrous matrix (atherosclerotic plaques) in the arterial wall [1]. The key steps of atherosclerogenesis include dysfunction of the endothelium, lipoprotein deposition, recruitment of monocytes and lymphocytes, and proliferation of smooth muscle cells [2]. Endothelial cell survival, proliferation, and migration are critical to maintain the homeostasis and normal functions of endothelium [3].
The common form of CAD appears multi-factorial in etiology, involving an interaction between genetic and environmental factors [4,5]. Over the past decades, great efforts have been made to systematically search for genes or chromosomal loci associated with CAD at the genome level by family or population-based association studies, leading to the identification of numbers of susceptibility genes or loci [6,7,8,9,10]. In contrast, familial CAD is rare but highly penetrated, presenting a monogenic effect and Mendelian inheritance. Mutations in genes MEF2A and LRP6 were previously identified as pathogenic or CAD-causing variants for familial CAD [11,12]. The detections of these loci or genes apparently increase our knowledge of understanding the molecular mechanism of CAD and may be helpful in improving the clinical treatment and drug discovery.
In addition to genetic influences, other risk factors for CAD are well established, such as elevated cholesterol, hypertension, obesity, and unhealthy lifestyles [13]. For example, hyperlipidemia, particularly the elevated level of low-density lipoprotein cholesterol (LDL-C), increases the risk for atherosclerosis which is fundamental to CAD [14,15,16]. In contrast, the high-density lipoprotein cholesterol (HDL-C) is inversely related with CAD [15,16,17]. Although hyperlipidemia is a significant risk factor for CAD, a considerable proportion of CAD patients are normolipidemic. It has been reported that only a third of CAD patients exhibit elevated cholesterol levels, especially LDL-C [18]. More than 40% and 60% of male CAD patients have normal ranges of serum LDL-C (<130 mg/dL, 3.4 mmol/L) and HDL-C levels (>35 mg/dL, 0.9 mmol/L) respectively [19]. Ultimately, how genetic determinants contribute differentially to hyperlipidemic and normolipidemic CAD remains largely unknown.
In this study, we recruited 40 Chinese Han families with early-onset hyperlipidemic or normolipidemic CAD, sequenced all exons and intron-exon boundaries of LRP6 and MEF2A, two previously reported CAD genes, and characterized the functions of newly identified mutations.

2.1. A Novel Mutation in LRP6 Was Identified in a Family with Normolipidemic CAD

DNA was extracted from the peripheral blood lymphocytes of 40 probands, including 19 hyperlipidemic and 21 normolipidemic CAD patients from northern China (Table S1). After amplifying the genomic DNA with primers, as shown in Tables S2 and S3, all exons and intron-exon boundaries of LRP6 and MEF2A were sequenced. As a result, a novel heterozygous variant in exon 6 of LRP6 was identified in a proband, belonging to a patient who was 41 years old and diagnosed with myocardial infarction without hyperlipidemia. This proband (subject II7) was from a family with three generations, involving 20 patients and non-affected first-order relatives (Figure 1A). Two of his three major coronary arteries showed at least 80% stenosis (Figure 1B), leading to percutaneous coronary intervention. The variant was located in a domain named YWTD (Tyr–Trp–Thr–Asp), causing a substitution of histidine to tyrosine (Y418H) (Figure 1C). The multiple alignments using a basic local alignment search tool (BLAST) in the NCBI database showed that this region was highly conserved from Denio rerio to Homo sapiens (Figure 1D). Y418H was predicted to be a probable damaging change with a score of 0.994 in Polyphen-2 (available online: http://genetics.bwh.harvard.edu/pph2/, Table S4). We sequenced exon 6 of LRP6 in another 1025 unrelated healthy individuals and found no variants.
In the Y418H family, another four members were previously diagnosed with CAD or suffered from sudden cardiac death before age 50 (men) or 55 (women), and two of them have been deceased. In addition to CAD, the proband (subject II7) and his sister (subject II5) were diagnosed with hypertension and diabetes. The third generation is too young and has no clinical symptoms, and is thus not subjected to clinical diagnosis. We genotyped 17 individuals from this family and found that the Y418H variant was co-segregated with CAD phenotypes (Figure 1A). It was speculated that this mutation came from subject I2. Eleven family members were available for measurement of fasting glucose, total cholesterol (TC), triglycerides, LDL-C, and HDL-C (Table 1). For subject II3 (unaffected) and subject II5 (CAD), who had not taken lipid-lowering drugs during the past six months, blood lipid levels were similar. Additionally, despite the similar ages, the blood lipid levels of Y418H-carriers III7 and III8 were significantly different. These suggested that Y418H is not co-segregated with dyslipidemia and that this familial CAD is not linked to hyperlipidemia.
Although no other mutations in LRP6 or MEF2A were found in the other 39 probands, we noticed several known single nucleotide polymorphisms (SNPs) included in the single nucleotide polymorphism database (dbSNP) during screening (data not shown). Nevertheless, we did not calculate their minor allele frequencies because of the limited number of samples.

As a receptor, LRP6 activates the canonical Wnt-mediated signal pathway. To determine whether the mutation Y418H impaired Wnt signaling transduction, a comparative study was carried out among wild-type (LRP6WT), mutant LRP6 with Y418H (LRP6Y418H) and mutant LRP6 with a previously reported mutation R611C (LRP6R611C) [12]. We transfected human umbilical vein endothelial cells (HUVEC) with the same amount of plasmids encoding LRP6WT, LRP6R611C or LRP6Y418H, which were supported by RT-PCR (Figure 2A). Western blot showed that when an equal amount of protein was loaded, the distribution of mutant LRP6 protein in the cellular membrane faction was similar to wild type (Figure 2B–D). The luciferase reporter activity indicating the extent of Wnt signal activation was then measured. We found that the Wnt3a-induced signaling was decreased 20% and 30% for LRP6R611C and LRP6Y418H compared with LRP6wt, respectively (p < 0.05) (Figure 2E). A more severe reduction was observed in the LRP6Y418H- than in the LRP6R611C-treated group (p < 0.05).

Endothelial cell dysfunction contributes to atherosclerogenesis. To investigate the possible mechanisms of atherosclerosis associated with LRP6Y418H, we first screened the effect of this mutation on endothelial cell functions, including proliferation, migration, and anti-apoptosis, which were critical to maintaining the integrity of the endothelium. A significantly decreased proliferation and migration was observed in HUVEC over-expressing LRP6R611C and LRP6Y418H (all p < 0.05), and the effect of LRP6Y418H was more profound than that of LRP6R611C (Figure 3A,B as well as Supplementary Figure S1). The over-expression of LRP6 (wild type and mutant) protected endothelial cells from the serum withdrawal-induced apoptosis, as shown by apoptotic DNA ladders (Figure 3C) and flow cytometric analyses (Figure 3D,E); the anti-apoptotic ability, however, was decreased in the cells infected by the mutant LRP6 (LRP6R611C and LRP6Y418H). No significant difference was observed between the two mutations.
We then assessed how the mutations influenced the inflammatory responses of endothelial cells and found no differences among the wild-type and two mutations in the mRNA expression of IL6 (Figure 3F), SELE (Figure 3G), and ICAM-1 (Figure 3H).
Finally, no differences were found in the mRNA expression of P21 and P16, two markers for cell senescence, among all groups, suggesting senescence was not involved (Figure 3I,J).

2.4. The Influence of LRP6Y418H on Cellular LDL-C Clearance

Compared with LRP6wt, LRP6R611C has been shown to decrease cellular LDL-C clearance. We examined whether LRP6Y418H had a similar effect. After being incubated with LDL-C labeled by Dil (a red dye), cells transfected with LRP6R611C presented a reduced LDL uptake compared to the LRP6wt cells (p < 0.05) (Figure 4A,B), but no differences existed between LRP6wt and LRP6Y418H.

We recruited 40 Chinese Han families with CAD that were ascertained through probands and included more than two early-onset CAD/ myocardial infarction (MI) patients (less than 50 years old for males or 55 years old for females). Blood pressure, glucose, hypertension, and diabetes mellitus were measured or defined [43]. Hyperlipidemia or normolipidemia were defined based on clinical diagnosis. 1025 unrelated Han Chinese controls were general healthy donors [44]. Written informed consent was obtained from all participants. The study was conducted in agreement with the principles outlined in the Declaration of Helsinki and approved by the Institutional Review Board, Institute of Molecular Medicine at Peking University.

Primary human umbilical vein endothelial cells (HUVECs) were isolated from fresh human umbilical veins, cultured in complete Endothelial Cell Medium (ECM, ScienCell), and maintained at 37 °C in 5% CO2. The informed consents were signed by babies’ fathers. The study was conducted in agreement with the principles outlined in the Declaration of Helsinki and approved by the Institutional Review Board, Institute of Molecular Medicine at Peking University.

Human genomic DNA was isolated as described previously [44]. The exons of the target genes and their flanking exon-intron boundaries were amplified by PCR using specific primers listed in Tables S2 and S3. The amplified DNA fragments were purified and subjected to direct sequencing on ABI 3130XL according to the manual description of BigDye v3.1 kit.

HUVECs were placed in a six-well plate containing 20 μg/dL cholesterol and 2 μg/mL 25-hydroxycholesterol to down-regulate the endogenous LDLR (Supplementary Figure S2). After 24 h, 10 μg/mL Dil-LDL was added and incubated at 37 °C for six hours. Cells were washed three times with PBS containing 1% FBS and were fixed in 4% paraformaldehyde. Specimens were then examined by confocal microscope.

Results are expressed as mean ± SD as indicated in the legends for measurement data. Comparisons were performed using one-way ANOVA with post-hoc in SPSS software. p < 0.05 was considered statistically significant. 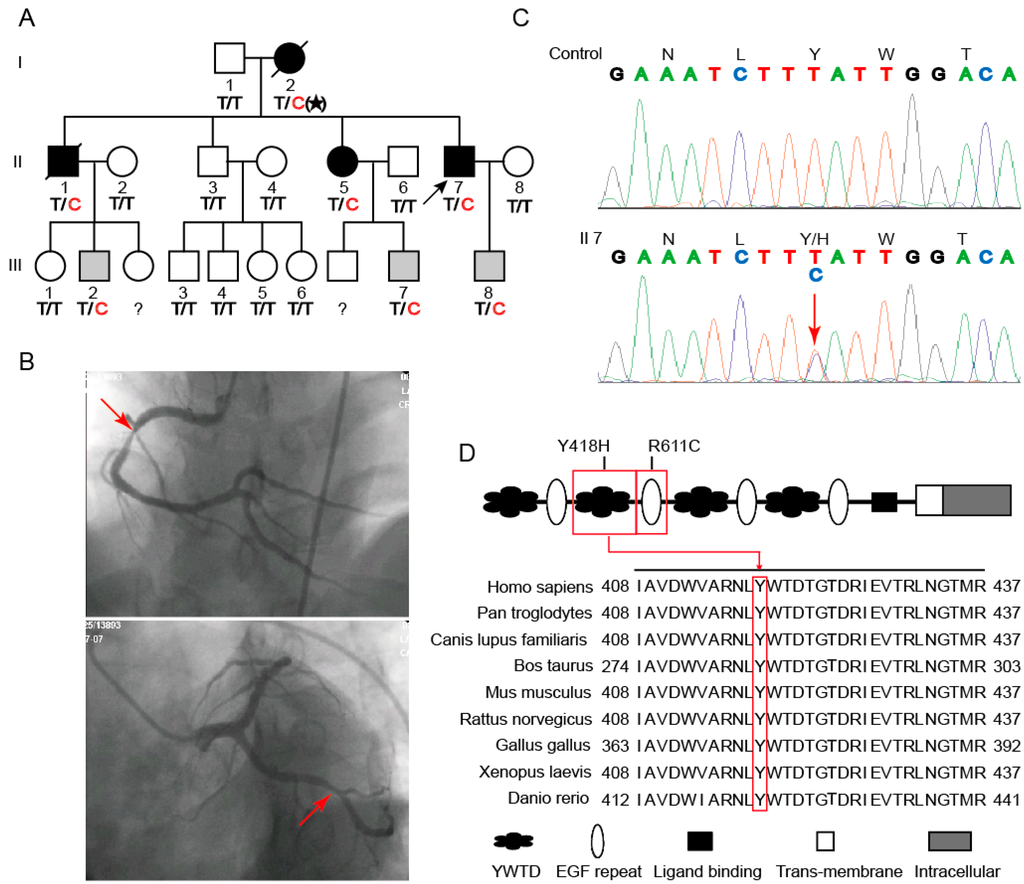 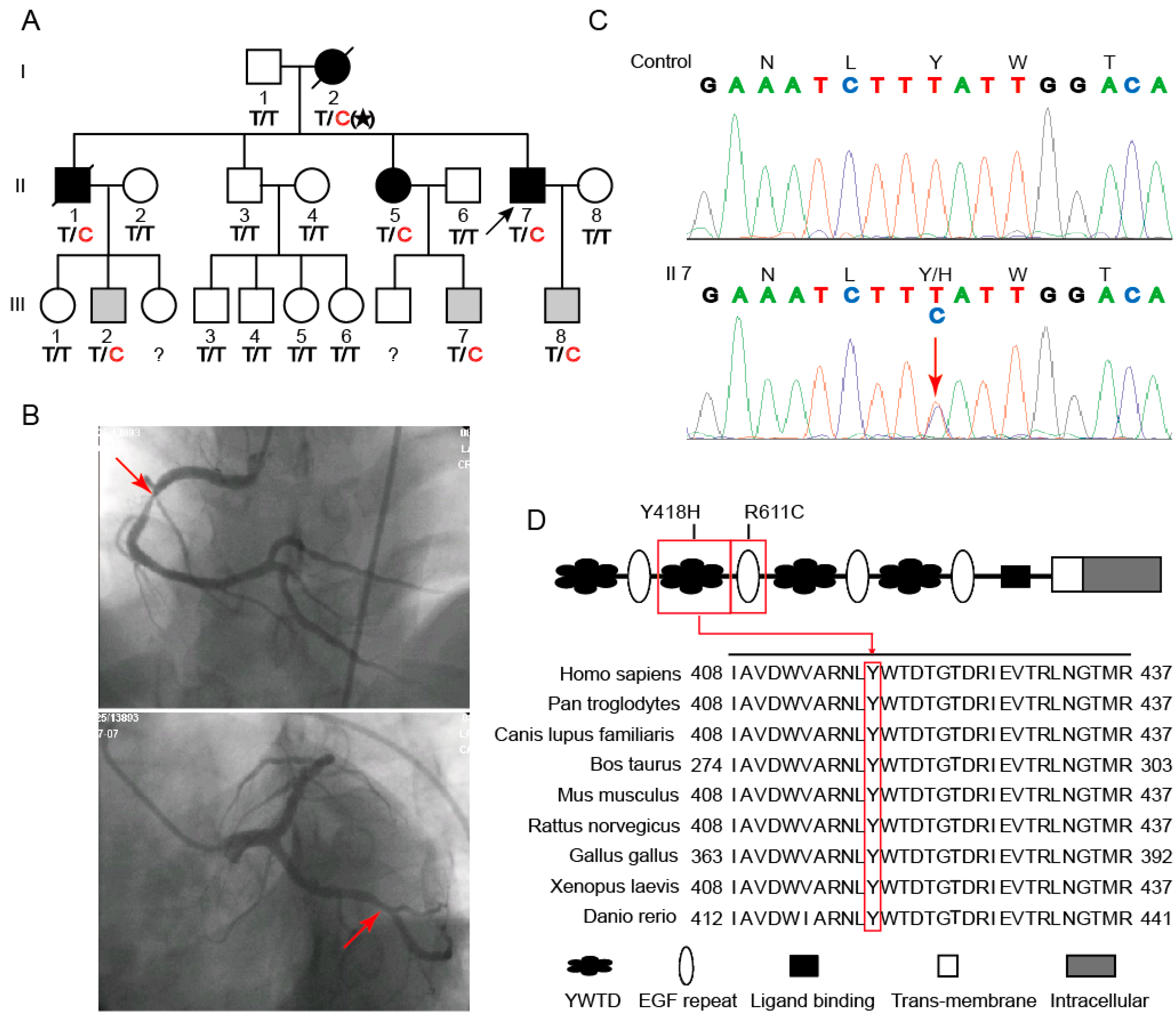 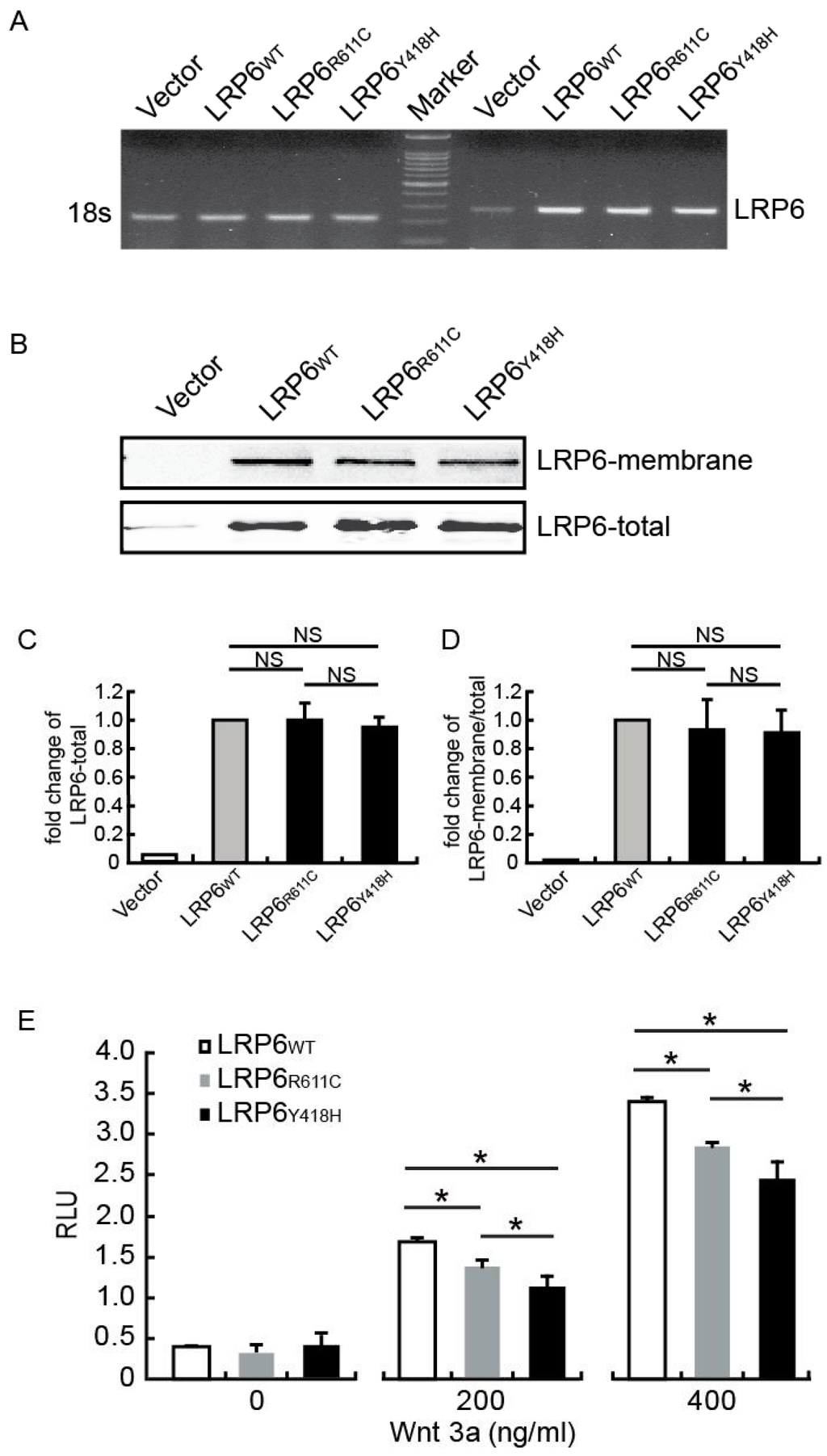 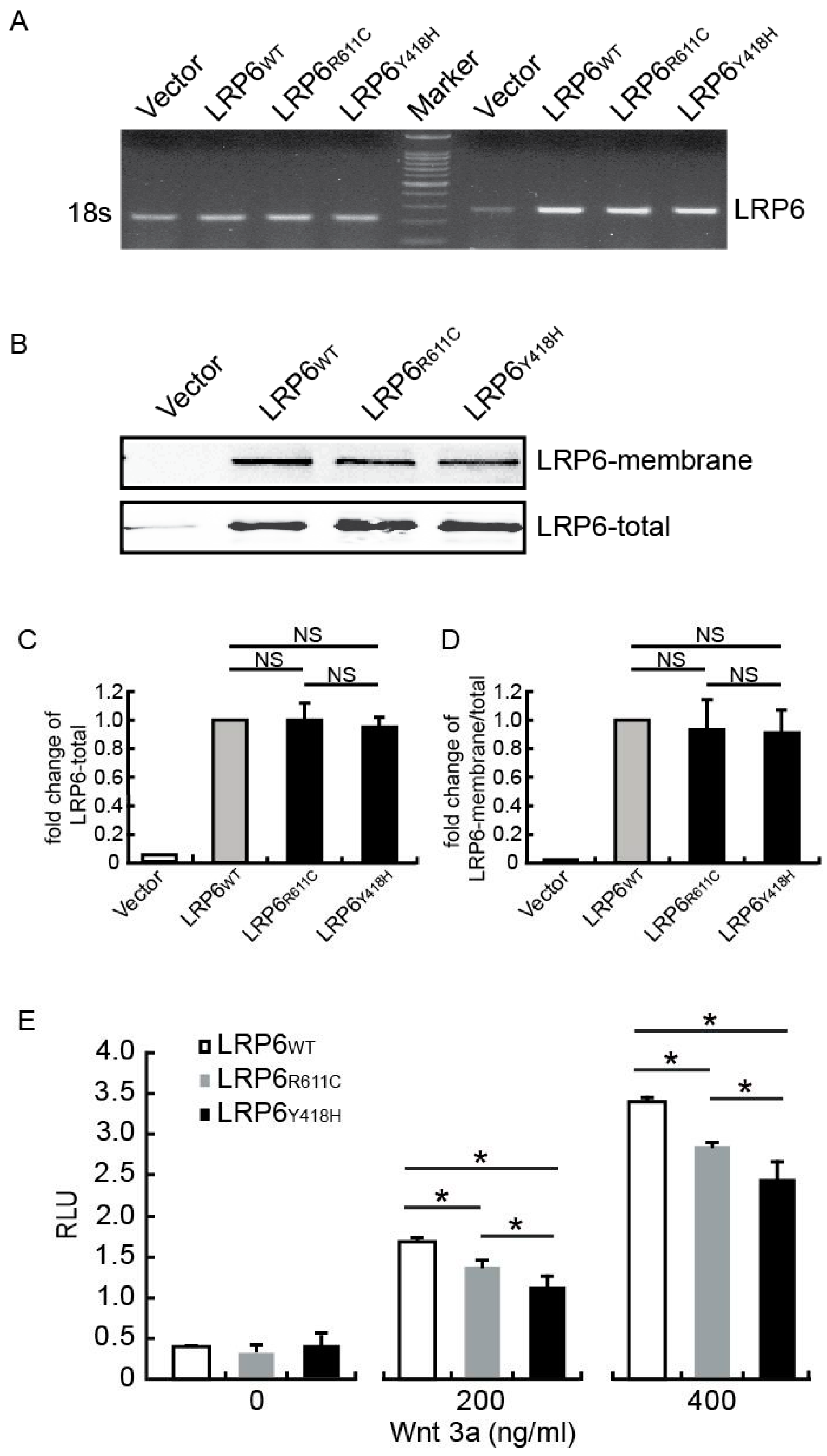 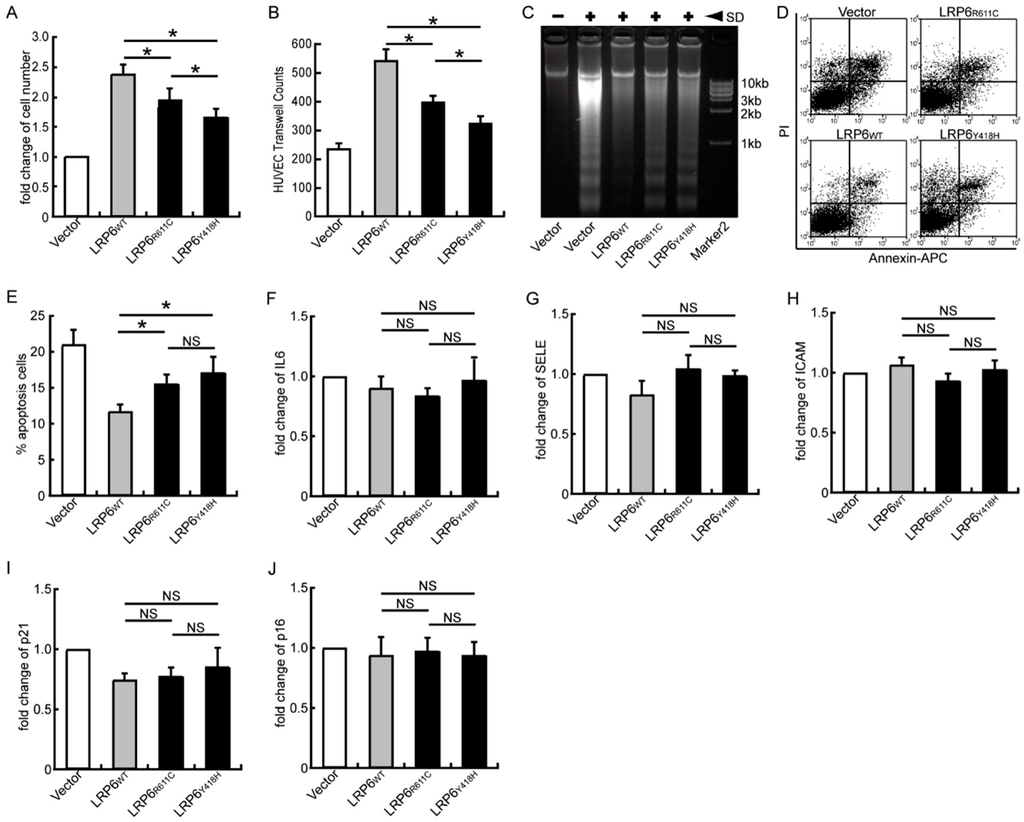 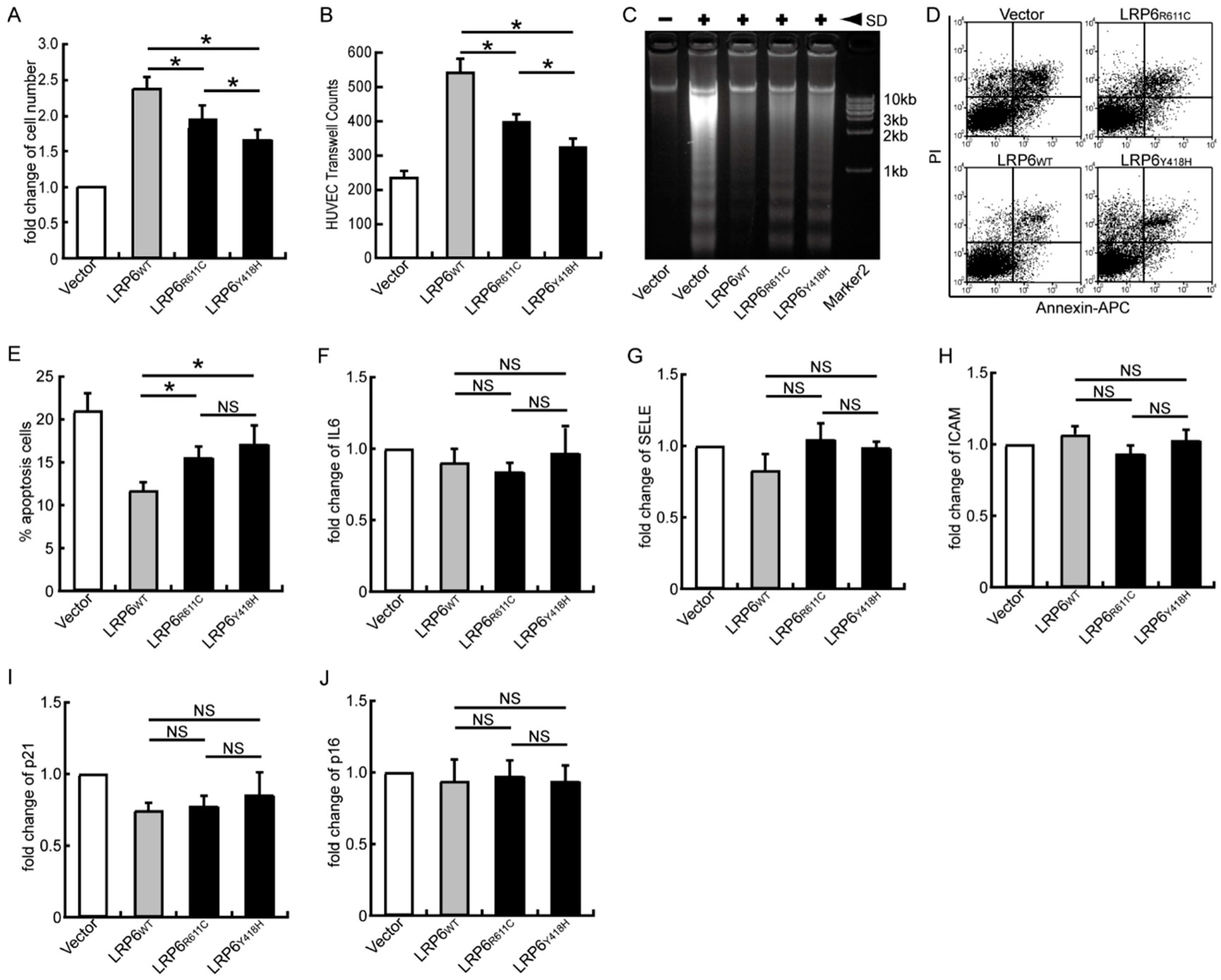 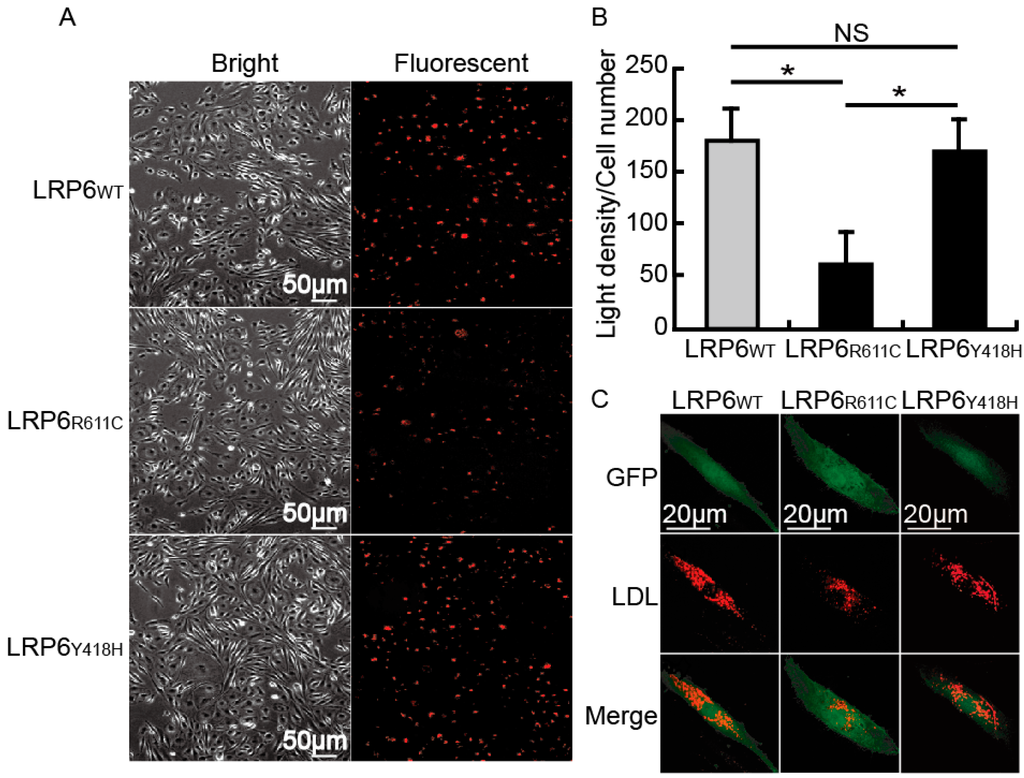 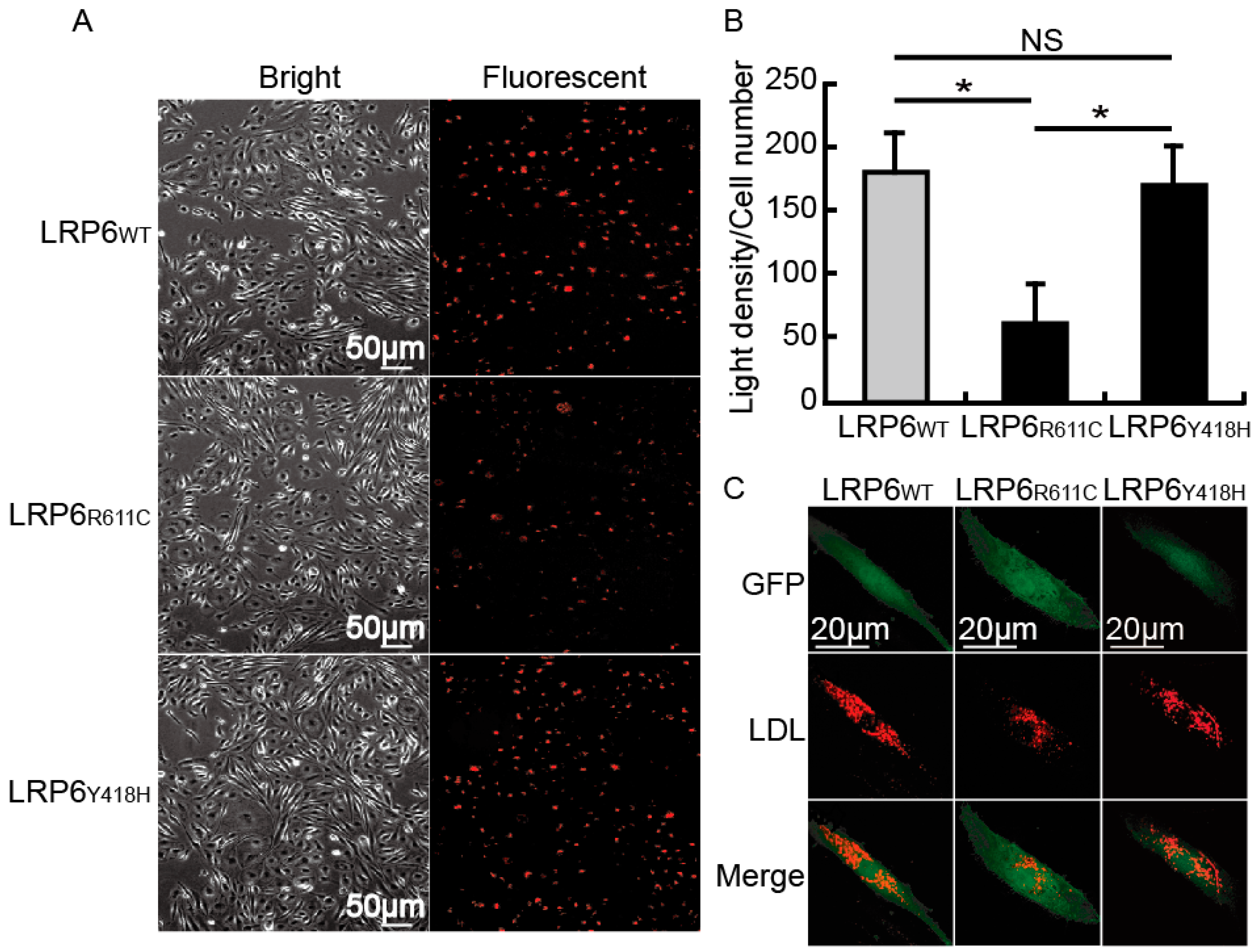