Lamotrigine (LTG) is generally considered as a voltage-gated sodium (Nav) channel blocker. However, recent studies suggest that LTG can also serve as a hyperpolarization-activated cyclic nucleotide-gated (HCN) channel enhancer and can increase the excitability of GABAergic interneurons (INs). Perisomatic inhibitory INs, predominantly fast-spiking basket cells (BCs), powerfully inhibit granule cells (GCs) in the hippocampal dentate gyrus. Notably, BCs express abundant Nav channels and HCN channels, both of which are able to support sustained action potential generation. Using whole-cell recording in rat hippocampal slices, we investigated the net LTG effect on BC output. We showed that bath application of LTG significantly decreased the amplitude of evoked compound inhibitory postsynaptic currents (IPSCs) in GCs. In contrast, simultaneous paired recordings from BCs to GCs showed that LTG had no effect on both the amplitude and the paired-pulse ratio of the unitary IPSCs, suggesting that LTG did not affect GABA release, though it suppressed cell excitability. In line with this, LTG decreased spontaneous IPSC (sIPSC) frequency, but not miniature IPSC frequency. When re-examining the LTG effect on GABAergic transmission in the cornus ammonis region 1 (CA1) area, we found that LTG markedly inhibits both the excitability of dendrite-targeting INs in the stratum oriens and the concurrent sIPSCs recorded on their targeting pyramidal cells (PCs) without significant hyperpolarization-activated current (Ih) enhancement. In summary, LTG has no effect on augmenting Ih in GABAergic INs and does not promote GABAergic inhibitory output. The antiepileptic effect of LTG is likely through Nav channel inhibition and the suppression of global neuronal network activity. View Full-Text
Keywords: Lamotrigine; GABAergic interneuron; inhibitory postsynaptic current; voltage-gated sodium channel; hyperpolarization-activated current Lamotrigine; GABAergic interneuron; inhibitory postsynaptic current; voltage-gated sodium channel; hyperpolarization-activated current
►▼ Show Figures 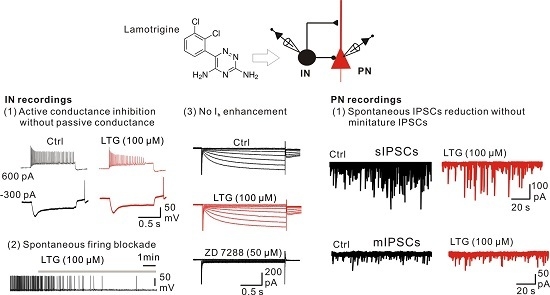