Synthesis and Cytotoxicity against K562 Cells of 3-O-Angeloyl-20-O-acetyl Ingenol, a Derivative of Ingenol Mebutate

Acidithiobacillus thiooxidans known for its ubiquity in diverse acidic and sulfur-bearing environments worldwide was used as the research subject in this study. To explore the genomic fluidity and intraspecific diversity of Acidithiobacillus thiooxidans (A. thiooxidans) species, comparative genomics based on nine draft genomes was performed. Phylogenomic scrutiny provided first insights into the multiple groupings of these strains, suggesting that genetic diversity might be potentially correlated with their geographic distribution as well as geochemical conditions. While these strains shared a large number of common genes, they displayed differences in gene content. Functional assignment indicated that the core genome was essential for microbial basic activities such as energy acquisition and uptake of nutrients, whereas the accessory genome was thought to be involved in niche adaptation. Comprehensive analysis of their predicted central metabolism revealed that few differences were observed among these strains. Further analyses showed evidences of relevance between environmental conditions and genomic diversification. Furthermore, a diverse pool of mobile genetic elements including insertion sequences and genomic islands in all A. thiooxidans strains probably demonstrated the frequent genetic flow (such as lateral gene transfer) in the extremely acidic environments. From another perspective, these elements might endow A. thiooxidans species with capacities to withstand the chemical constraints of their natural habitats. Taken together, our findings bring some valuable data to better understand the genomic diversity and econiche adaptation within A. thiooxidans strains. View Full-Text
Keywords: Acidithiobacillus thiooxidans; comparative genomics; intraspecific diversity; niche adaptation Acidithiobacillus thiooxidans; comparative genomics; intraspecific diversity; niche adaptation
►▼ Show Figures 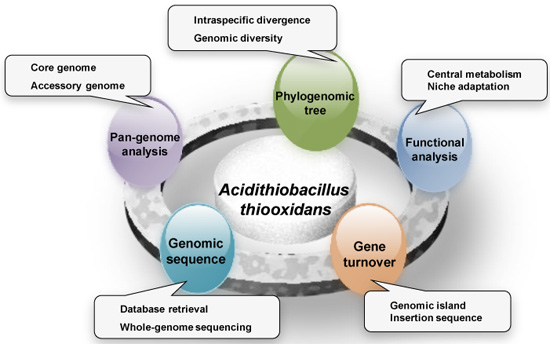