Eleven new abietane type (1‒11), and one new kaurane (12), diterpenes, together with eleven known compounds (13–23), were isolated and identified from the stems of Tripterygium regelii, which has been used as a traditional folk Chinese medicine for the treatment of rheumatoid arthritis in China. The structures of new compounds were characterized by means of the interpretation of high-resolution electrospray ionization mass spectrometry (HRESIMS), extensive nuclear magnetic resonance (NMR) spectroscopic data and comparisons of their experimental CD spectra with calculated electronic circular dichroism (ECD) spectra. Compound 1 is the first abietane type diterpene with an 18→1 lactone ring. Compound 19 was isolated from the plants of the Tripterygium genus for the first time, and compounds 14–17 were isolated from T. regelii for the first time. Triregelin I (9) showed significant cytotoxicity against A2780 and HepG2 with IC50 values of 5.88 and 11.74 µM, respectively. It was found that this compound was inactive against MCF-7 cells. The discovery of these twelve new diterpenes not only provided information on chemical substances of T. regelii, but also contributed to the chemical diversity of natural terpenoids. View Full-Text
Keywords: Tripterygium regelii; diterpenoids; cytotoxicity Tripterygium regelii; diterpenoids; cytotoxicity
►▼ Show Figures 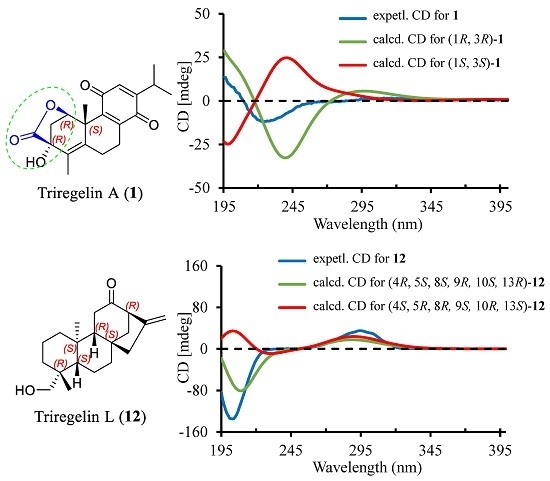