Transcriptome-Wide Identification and Prediction of miRNAs and Their Targets in Paris polyphylla var. yunnanensis by High-Throughput Sequencing Analysis
Next Article in Special Issue

Heliopsis longipes roots have been widely used in Mexican traditional medicine to relieve pain, mainly, toothaches. Previous studies have shown that affinin, the major alkamide of these roots, induces potent antinociceptive and anti-inflammatory activities. However, the effect of H. longipes root extracts and affinin on the cardiovascular system have not been investigated so far. In the present study, we demonstrated that the dichloromethane and ethanolic extracts of H. longipes roots, and affinin, isolated from these roots, produce a concentration-dependent vasodilation of rat aorta. Affinin-induced vasorelaxation was partly dependent on the presence of endothelium and was significantly blocked in the presence of inhibitors of NO, H2S, and CO synthesis (NG-nitro-l-arginine methyl ester (l-NAME), dl-propargylglycine (PAG), and chromium mesoporphyrin (CrMP), respectively); K+ channel blockers (glibenclamide (Gli) and tetraethyl ammonium (TEA)), and guanylate cyclase and cyclooxygenase inhibitors (1H-[1,2,4]oxadiazolo[4,3-a]quinoxalin-1-one (ODQ) and indomethacin (INDO), respectively). Our results demonstrate, for the first time, that affinin induces vasodilation by mechanisms that involve gasotransmitters, and prostacyclin signaling pathways. These findings indicate that this natural alkamide has therapeutic potential in the treatment of cardiovascular diseases. View Full-Text
Keywords: Heliopsis longipes; affinin; vasodilation; rat aorta; gasotransmitters; prostacyclin Heliopsis longipes; affinin; vasodilation; rat aorta; gasotransmitters; prostacyclin
►▼ Show Figures 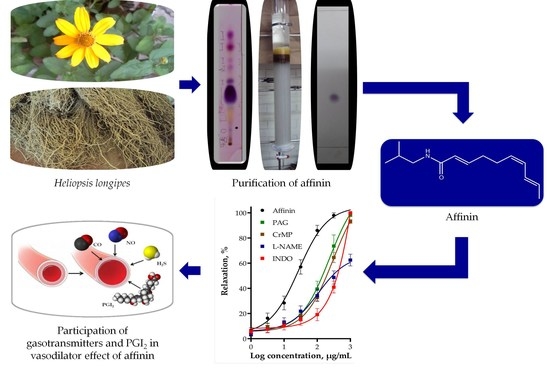