Solid pseudopapillary tumor of the pancreas (SPT) is a rare pancreatic disease with a unique clinical manifestation. Although CTNNB1 gene mutations had been universally reported, genetic variation profiles of SPT are largely unidentified. We conducted whole exome sequencing in nine SPT patients to probe the SPT-specific insertions and deletions (indels) and single nucleotide polymorphisms (SNPs). In total, 54 SNPs and 41 indels of prominent variations were demonstrated through parallel exome sequencing. We detected that CTNNB1 mutations presented throughout all patients studied (100%), and a higher count of SNPs was particularly detected in patients with older age, larger tumor, and metastatic disease. By aggregating 95 detected variation events and viewing the interconnections among each of the genes with variations, CTNNB1 was identified as the core portion in the network, which might collaborate with other events such as variations of USP9X, EP400, HTT, MED12, and PKD1 to regulate tumorigenesis. Pathway analysis showed that the events involved in other cancers had the potential to influence the progression of the SNPs count. Our study revealed an insight into the variation of the gene encoding region underlying solid-pseudopapillary neoplasm tumorigenesis. The detection of these variations might partly reflect the potential molecular mechanism. View Full-Text
Keywords: SPT; exome sequencing; genetic variation; SNPs; indels SPT; exome sequencing; genetic variation; SNPs; indels
►▼ Show Figures 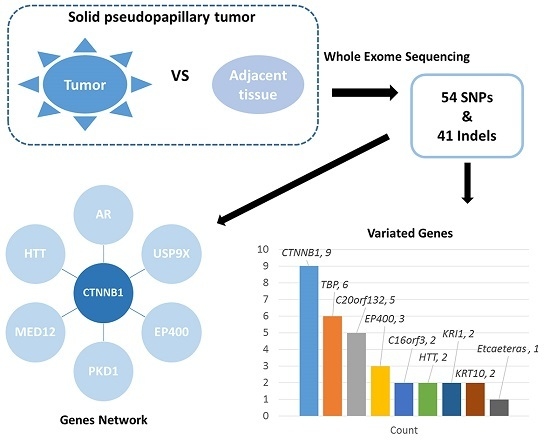