Dysbindin-1 Involvement in the Etiology of Schizophrenia

Schizophrenia is a major psychiatric disorder that afflicts about 1% of the world’s population, falling into the top 10 medical disorders causing disability. Existing therapeutic strategies have had limited success on cognitive impairment and long-term disability and are burdened by side effects. Although new antipsychotic medications have been launched in the past decades, there has been a general lack of significant innovation. This lack of significant progress in the pharmacotherapy of schizophrenia is a reflection of the complexity and heterogeneity of the disease. To date, many susceptibility genes have been identified to be associated with schizophrenia. DTNBP1 gene, which encodes dysbindin-1, has been linked to schizophrenia in multiple populations. Studies on genetic variations show that DTNBP1 modulate prefrontal brain functions and psychiatric phenotypes. Dysbindin-1 is enriched in the dorsolateral prefrontal cortex and hippocampus, while postmortem brain studies of individuals with schizophrenia show decreased levels of dysbindin-1 mRNA and protein in these brain regions. These studies proposed a strong connection between dysbindin-1 function and the pathogenesis of disease. Dysbindin-1 protein was localized at both pre- and post-synaptic sites, where it regulates neurotransmitter release and receptors signaling. Moreover, dysbindin-1 has also been found to be involved in neuronal development. Reduced expression levels of dysbindin-1 mRNA and protein appear to be common in dysfunctional brain areas of schizophrenic patients. The present review addresses our current knowledge of dysbindin-1 with emphasis on its potential role in the schizophrenia pathology. We propose that dysbindin-1 and its signaling pathways may constitute potential therapeutic targets in the therapy of schizophrenia. View Full-Text
Keywords: schizophrenia; dysbindin-1; susceptibility gene; neurotransmitter release; neurite outgrowth schizophrenia; dysbindin-1; susceptibility gene; neurotransmitter release; neurite outgrowth
►▼ Show Figures 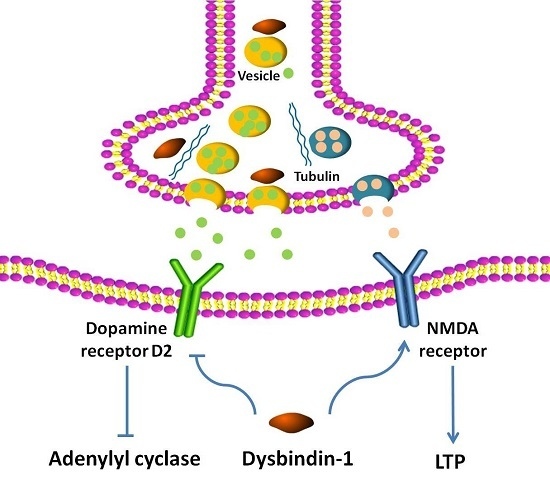