A recent genetic analysis of infertile globozoospermic patients identified causative mutations in three genes: a protein interacting with C kinase 1 (PICK1), dpy 19-like 2 (DPY19L2), and spermatogenesis associated 16 (SPATA16). Although mouse models have clarified the physiological functions of Pick1 and Dpy19l2 during spermatogenesis, Spata16 remains to be determined. Globozoospermic patients carried a homozygous point mutation in SPATA16 at 848G→A/R283Q. We generated CRISPR/Cas9-mediated mutant mice with the same amino acid substitution in the fourth exon of Spata16 to analyze the mutation site at R284Q, which corresponded with R283Q of mutated human SPATA16. We found that the point mutation in Spata16 was not essential for male fertility; however, deletion of the fourth exon of Spata16 resulted in infertile male mice due to spermiogenic arrest but not globozoospermia. This study demonstrates that Spata16 is indispensable for male fertility in mice, as well as in humans, as revealed by CRISPR/Cas9-mediated mouse models. View Full-Text
Keywords: genome editing; male infertility; mouse model; point mutation; spermatogenesis; testis genome editing; male infertility; mouse model; point mutation; spermatogenesis; testis
►▼ Show Figures 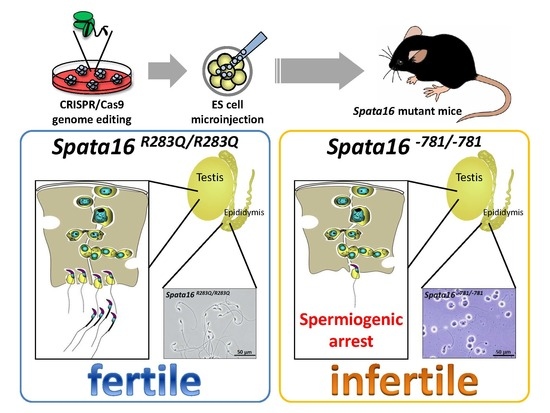