Despite the predominance of female patients and uncommon obesity, rheumatoid arthritis (RA) is tightly connected to increased cardiovascular morbidity. The aim of this study was to investigate transcriptional activity in the subcutaneous white adipose tissue (WAT) with respect to this disproportionate cardiovascular risk (CVR) in RA. CVR was estimated in 182 female patients, using the modified Systematic Coronary Risk Evaluation scale, and identified 93 patients with increased CVR. The overall transcriptional activity in WAT was significantly higher in patients with CVR and was presented by higher serum levels of WAT products leptin, resistin and IL-6 (all, p < 0.001). CVR was associated with high WAT-specific transcription of the signal transducer and activator of transcription 3 (STAT3) and the nuclear factor NF-kappa-B p65 subunit (RELA), and with high transcription of serine-threonine kinase B (AKT1) in leukocytes. These findings suggest Interleukin 6 (IL-6) and leptin take part in WAT-specific activation of STAT3. The binary logistic regression analysis confirmed an independent association of CVR with IL-6 in serum, and with STAT3 in WAT. The study shows an association of CVR with transcriptional activity in WAT in female RA patients. It also emphasizes the importance of STAT3 regulatory circuits for WAT-related CVR in RA. View Full-Text
Keywords: rheumatoid arthritis; cardiovascular risk; adipose tissue; STAT3; IL6; leptin rheumatoid arthritis; cardiovascular risk; adipose tissue; STAT3; IL6; leptin
►▼ Show Figures 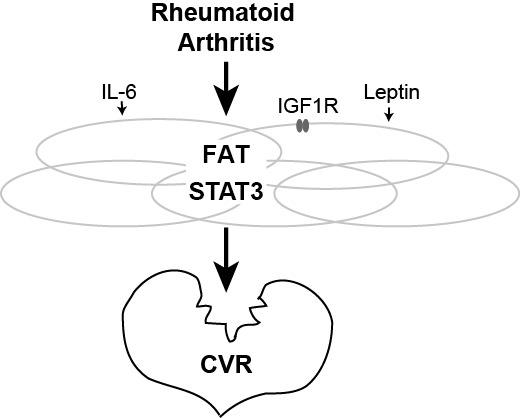